A recent article in the New York Times resurrected an old chestnut: the affordability of dental care in an aging population. Have a look below at how the NY Times’ cartoonist sees this issue! Enough said

This got me thinking about a recent chart published by the American Dental Association, which shows how the aging population is responding to the cartoonist’s impression about the cost of dental care.

Refer to the following which shows dental incomes (green line) in America have declined since 2006 while overall American incomes (blue line) have kept growing.

I am not sure that these income trends in Canada are as severe as they are in the U.S. But I do know that attendance is down (judging from the empty waiting rooms which I see routinely) in Canadian dental practices.

When discussing this situation with dentists in Toronto, I commonly hear about how there are too many dentists in their community. The U of T is graduating another 125 dentists this year, I hear.

That is likely only part of the problem. The other, which is often not mentioned, is the cost of dental services to those without a dental plan or a plan which pays for only part of the crown, part of the root canal or none of the implant.

So how does the dental profession respond to this affordability issue? According to the NY Times, dental professors say get implants only on the bottom gums and dentures on the top! or get a second opinion! or brush and floss more.

Cold comfort to the retiring Boomers it seems. Perhaps a consumer perspective is needed on how to offer dental services differently and at a cost which is palatable.

Imagine if that cartoon above, showed a price of $600 (the cost of Prevora in the first year) instead of $12,000. What would the waiting room look like then?! 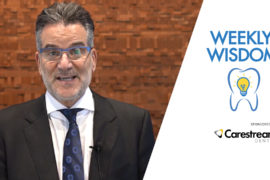