Are you getting the Vibe?

A savvy
marketing guru has joined forces with Dr. Steven Goldberg, the inventor
of DentalVibe. DentalVibe, a comfort injection system, utilizes patented
VibraPulse pain blocking technology to send a message to the patient’s
brain, intercepting the pain and sensitivity associated with a
traditional injection. Scott Mahnken has helped companies such as SS
White, KOMET, AMD LASERS, Milestone Scientific and others promote their
products to dentists.

Mahnken has already launched an eye-opening
professional marketing campaign as you can witness by scouring any of
the leading dental journals or visiting the company website. At last
year’s ADA meeting in Orlando, DentalVibe was a huge hit with dentists.

What’s next for DentalVibe? An aggressive, direct-to-the-consumer
campaign that includes billboard advertisements in major markets, a
print-to-consumer campaign, an online consumer strategy and, just
recently, the company aligned with a social marketing expert.

“Our commitment is to do what so many other dental manufacturers
dream about doing, but simply don’t pull the trigger,” said Mahnken.

“My research showed that dentists need help. The introduction of new
products and technologies creates a bit of a drain on the revenue
stream, yet it’s vital for all dentists to equip themselves with the
best instruments.

The company conducted tests with dental offices in Texas that
marketed the DentalVibe (they sent an e-mail and put DentalVibe on their
website homepage) to attract new patients, and as a reminder to
existing patients that it was time for their office visit and noted that
“Now we have DentalVibe!”

“The results were outstanding. We had one office that called us in a
panic because they had patients scheduled before their DentalVibe
arrived, therefore, we had to ship one FedEx,” Mahnken said.

The next test was conducted in California, where DentalVibe was
marketed to “needlephobes,” and again DentalVibe proved successful.

As one dentist said: “When a needlephobe entered as a new patient, we
were able to reduce his or her anxiety by explaining and then
implementing the DentalVibe. Needlephobes need lots of dental work, so
gaining one as a patient is terrific for the office and the patient.”

In the coming weeks, DentalVibe will be introducing their DentalVibe
Patient Kit, offered to all DentalVibe offices. It includes patient
literature, advertising slicks, a DentalVibe diploma and other referral
generating tools for the practice.

“We’re extremely excited about the future, and one of the reasons is a
very sophisticated ‘dentist locator’ that will be implemented to
complement the consumer awareness campaign and will feature profile
information for DentalVibe offices.

“Our research has shown that the dentist locator will create
significant value to our customers. Certainly, DentalVibe was created to
offer outstanding clinical value — we take pride in helping dentists
deliver stress-free palatal and block injections — yet the
practice-building benefits are undeniable and measurable,” stated
Mahnken.

How has DentalVibe taken dentistry by storm in such a short time?

Notable dental speakers, such as Dr. Louis Malcmacher, Dr. Fred
Margolis and a handful of others, are incorporating DentalVibe into the
lectures.

DentalVibe is already achieving international recognition. The
company has received inquiries from 91 countries, and most recently a
Turkish distributor ordered 250 DentalVibes.

“There have been other instruments that were developed to enhance the
injection experience, including some that I have marketed, yet none
have achieved a universal market share,” Mahnken said.

“DentalVibe is ideally positioned to become the standard of care for
every dental injection. DentalVibe is offered for $795 on the company
website and occasionally the company offers special promotions,” he
noted.

For pedodontists, DentalVibe offers special collectable finger
puppets that attach to the end of the DentalVibe and provide a fun
distraction and gift for well-behaved kids.

“DentalVibe has the ability to put the magic back into your practice.
Recapture the energy and positive vibes among your staff and patients
as you give them something to talk about,” Mahnken added.

The company knows what you’re thinking: “I already give a great
injection.” Well the fact is that patients don’t complain to the
dentist, they complain in silence and by not maintaining their
appointments. We’ve yet to see a dental office with an official
complaint department.

Potential new patients don’t know that you’re great, thus consider
how the California dentists marketed to needlephobes, and how successful
it proved to be for their practices and their patients.

Dentists are invited to try DentalVibe risk free for 30 days to witness the difference. 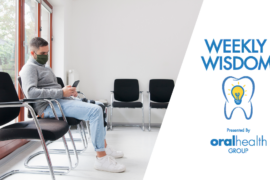