Histological Comparison of Healing Following Tooth Extraction With Ridge Preservation Using Mineralized vs. Demineralized Freeze Dried Bone Allograft
Robert A. Wood D.M.D, M.S.,* Brian L. Mealey D.D.S., M.S.*
*Department of Periodontics, University of Texas Health Science Center San Antonio, San Antonio, TX.
Background: Allografts such as demineralized freeze-dried bone allograft (DFDBA) and mineralized FDBA are commonly used by clinicians for ridge preservation procedures. The primary objective of this study is to histologically evaluate and compare the healing of non-molar extraction sockets grafted with DFDBA vs. FDBA for ridge preservation. The secondary aim of this study is to compare dimensional changes in ridge height and width following grafting with these two materials.
Materials: Forty subjects were randomly divided into 2 groups of 20. Extraction sockets were filled with either FDBA or DFDBA. To minimize variables associated with the organ donor and with tissue processing, all of the graft material was procured from a single donor; the only difference in the 2 materials was the percent mineralization of the final bone graft. A 2mm diameter core biopsy was taken from each grafted site approximately 19 weeks after grafting.
Histomorphometric analysis was performed to determine percentage of vital bone, residual graft particles, and connective tissue (CT)/other.
Results: There were no significant differences when comparing changes in alveolar ridge dimensions of the two groups. There was no significant difference in percentage CT/other between groups. DFDBA had a significantly greater percentage of vital bone at 38.42% versus FDBA at 24.63%. The DFDBA group also had a significantly lower mean percentage of residual graft particles at 8.88% compared to FDBA at 25.42%.
Conclusion: This study provides the first histologic and clinical evidence directly comparing ridge preservation with DFDBA versus FDBA in humans and demonstrates significantly greater new bone formation with DFDBA. 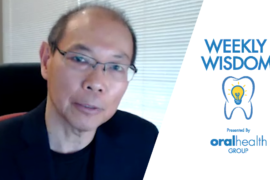