Tylenol 3 and Percocets are routinely used for dental pain –

READ THIS ARTICLE – click on link and then read below……..

Some family physicians write dramatically higher numbers of
prescriptions for powerful opioid painkillers than others, according to a
new study that warns major problems with prescribing practices is
putting patients at risk.

The study, being published in the March
edition of Canadian Family Physician, found family doctors who wrote the
most opioid prescriptions also had the highest number of patient deaths
linked to the painkillers.Opioids are a class of drugs used most commonly to treat and manage
pain. They have come under intense scrutiny in recent years, however, as
use of the drugs increased significantly and more patients abused,
misused or overdosed on the drug.

The findings add to widespread concerns in the medical community that opioid painkillers, such as oxycodone, morphine and fentanyl, are being over-prescribed,leading to drug dependence and serious side effects,including increased risk of death.

“They’re dangerous drugs,” said Irfan Dhalla, staff physician and scientist at Toronto’s St. Michael’s Hospital
and lead author of the study. “They need to be prescribed and used with
great care and the way they’re being used right now, they’re often
prescribed and used as if they were much safer than they are.”

But
the study also highlights divisions in the medical community about the
role opioids should play. While some health professionals want use of
the drugs restricted, others say that solution ignores the fact opioids
are an important treatment tool for some chronic-pain patients.

In the study, researchers at St. Michael’s Hospital and the Institute for Clinical Evaluative Sciences
used records from Ontarians who qualified for provincial drug coverage
in 2006 to determine opioid prescribing rates among physicians.

They
found major variation among family doctors across Ontario, with some
physicians writing opioid prescriptions at rates 55 times higher than
those who prescribed opioids the least.

Researchers also
determined that of the 408 people whose deaths were linked to opioids in
2006, 166 of them had received at least one publicly funded opioid
prescription in the year before their death. About 60 per cent of them
received their final prescription from a family physician.

“I think the dangers of these medications are still underappreciated,” Dr. Dhalla said.

The
study authors argue the number of opioid prescriptions given to
patients should be reduced in order to prevent serious adverse events in
patients. Dr. Dhalla said there is limited evidence proving the
effectiveness of opioids in managing pain, which should provide the
impetus for their use to be restricted.

There are some efforts
under way to improve opioid prescribing practices in Canada. Guidelines
were published last year to help doctors determine the circumstances
under which the drugs should be prescribed. Now, the Michael G. DeGroote
National Pain Centre at McMaster University in Hamilton is
overseeing the guidelines and will update them in the hope they help
health professionals across Canada understand opioid use.

Norm
Buckley, director of the pain centre and chair of anesthesia at
McMaster’s medical school, said some patients can benefit from opioid
painkillers, which is why doctors need better prescribing guidelines. He
added that it might be too simple to conclude the drugs need to be
severely limited because some patients died while taking them. Many
chronic-pain patients taking opioids, for instance, suffer depression
and may commit suicide, not accidentally overdose on the drugs.

However,
Dr. Irfan argues opioids have clear, undeniable dangers to many
patients and that much better evidence is needed to understand who may
be most at risk while taking them as well as the long-term side effects.

He
said the explosion in the use of opioids is, in many ways,
irresponsible and more of a reflection of aggressive marketing by the
drug companies that sell them. 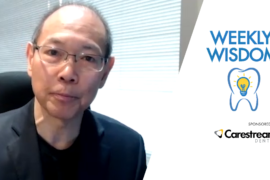 Weekly Wisdom: Bet on Yourself!