Reflections on Golden Girls of Dentistry Cruise… and Why Men Should Be Behind It!

I am writing this blog as I fly home to Ottawa from New Orleans having just finished spending a few days on the Golden Girls of Dentistry Cruise for 2018.

I know many of you are asking the same question…Shawn…what were you doing on a Golden Girls of Dentistry Cruise?

The short answer is I hosted and organized this event. But that still begs the question as to why I would organize it in the first place.

There are essentially two parts to answering that question. The first is that for all the progress our society has made in advancing gender equality, we are still not quite where we need to be.

We have come a long way! More and more women are rising to prominence in both business and politics. Because of this, we are at the point where the cracks in the glass ceiling are quite visible.

Still, if some of the backlash to the #metoo movement has taught us anything, it is that some men are not ready to listen to the calls for change. Consequently, I believe men who are open to new perspectives are vital to the achievement of true equality. We should not seek to take control of the agenda. But we can still support it.

The second part of the answer is more pragmatic. The world is changing and dentistry is not immune to that change. In fact, the move from an industrial economic model to a more creative, ideas based one may dramatically change how dentistry is practiced and, in turn, how dentists will be trained and educated.

To illustrate, think of how a dental office is, in some ways, actually reflective of an industrial assembly line. Patients start in the reception area for initial processing before being moved to the waiting room, then an operatory, possibly a consult room and with equipment being introduced along the way from a separate sterilization area. Each step in the process is separate and distinct, with limited interplay between them except at the point of transfer.

This actually is a great reflection of how the male mind likes to work. Focus on a small, repetitive task, do it well and then move it along. For the male dentist, this means seldom worrying about what goes on beyond the walls of the operatory. Just stay in your room and make money!

Dental schools themselves reinforce such a model as they continue to graduate dentists on the basis of completing repetitive tasks, such as how many crowns, fillings and root canals they have done. Just keep doing your job on the assembly line and move it on to the next phase.

But the new economy is more about rewarding those who can see the bigger picture in more creative and complete ways. The compartmentalized, industrial era assembly line model is giving way to the more creative, big picture, problem solver one.

Interestingly, studies show that women tend to be more adept at this type of creative, big picture thinking than men. That should increase the importance of the female perspective as the traditional work of crowns, root canals and various cosmetic procedures will become more integrated with oral cancer screening, whole body health and sleep apnea. The mouth is more than a simple compartment of the human body. It is literally a gateway to whole body health. And women often see this connection in a different way than men.

It is this ability to see the bigger picture that the Golden Girls of Dentistry wishes to address. We seek to support a greater voice to more accurately reflect the greater prominence that women have in the dental community as a whole. We seek to better the total patient experience and overall health outcomes for all patients by encouraging women to seek a stronger voice in the growth of the profession.

The Golden Girls is about making dentistry better for everyone. And when that is the goal, does it really matter if the idea comes from a man or a woman? 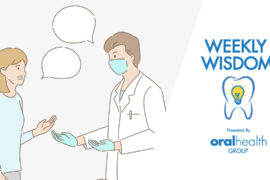