Dentistry Turns Art for A Good Cause

May 10, 2016
by University of Louisville School of Dentistry

Many people are familiar with sitting in the dental chair with mouthfuls of gooey alginate impression material used in making plaster casts for treatment planning of crowns, bridges, dentures or orthodontic appliances. But taking impressions isn’t only for teeth. For more than a dozen years, University of Louisville School of Dentistry faculty and students have been extending this practice into the world of art and sculpture.

As part of a UofL pediatric dentistry fund-raising event at the annual St. James Court Art Show each October, members of the Alpha Omega International Dental Fraternity student chapter use dental plaster materials to practice techniques learned in the lab and clinic. But, instead of making molds of teeth, they create custom-made 3D plaster casts of hands, feet and faces.

“It is a great feeling to donate to such a good cause; the event provides an opportunity to build relationships with members of the community while helping familiarize students with dental materials we use in the clinics,” said Holly Bradford, third year dental student and president of AO, an organization with 55 UofL student members and 25 local alumni members.

The AO Handmakers have been creating the unique art since 2002 under the leadership of then-dental student Rachel Davis, D.M.D., and AO faculty co-advisor Lawrence Gettleman, D.M.D., M.S.D., professor of prosthodontics and biomaterials, UofL School of Dentistry. 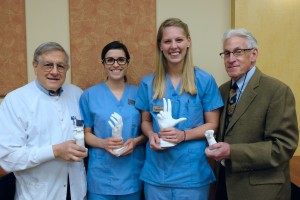 “My aunt was an artist, and I later discovered she had made alginate impressions of my hands, feet and face when I was an infant,” Gettleman said. “It is very personal and meaningful for people who buy these casts, and we have occasionally visited nursing homes and hospitals to make hand molds of those who are elderly or ill.”

Gettleman, who owns a home and carriage house on South Fourth Street, sets up a tent with tables and chairs in his driveway during the art show.

“We have our mix materials, water and some towels ready to go. Patrons stop by the booth and we apply the alginate in a loose fashion. We need to build enough bulk so that when a person removes their hand the impression does not rip – we also have some tricks like putting wax under fingernails so as to avoid tears. It sets within three-to-five minutes,” Gettleman said.

Afterwards, students go into what Gettleman refers to as his carriage house ‘studio’ to create the actual casts. They mix orthodontic white stone donated by Whip Mix Corporation and pour the mixture into the molds. Within two or three hours, the dental team pull the molds off the plaster casts. 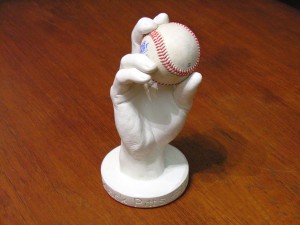 Gettleman describes plaster as “very forgiving,” so if imperfections such as creases or bubbles are found, the dental team can correct them using a knife or dental hand instrument.

Following the correction process, the students apply a model soap to produce a glossy surface. The plaster casts are placed on a base creatively molded from plastic jar lids. Students imprint the base with the words ‘AO Handmakers’ and ‘St. James Court Art Show,’ along with an engraving of a name and date, if desired. The casts are delivered to purchasers in time for the December holidays.

The AO Handmakers completed 20 plaster casts in 2015 and donated $500 in proceeds to the UofL pediatric dentistry program.

The 60th Annual St. James Court Art Show is Sept. 1 – Oct. 2, 2016 when the AO Handmakers will set up a booth in the driveway of 1461 S. 4th Street for patrons interested in creating a unique piece of art with a twist of dentistry.