Dentists who complete the 15 question quiz in the November, 2003 issue of Oral Health may be eligible to receive continuing education points. The names and license numbers of all who complete the quiz will be forwarded to their respective provincial licensing authorities.

After six months’ maintenance therapy of patients with periodontal disease, use of the PerioChip would result in

B. less bleeding on probing.

D. All of the above.

E. None of the above.

The PerioChip consists of a biodegradable delivery system, which contains 2.5 mg of chlorhexidine gluconate in a cross-linked hydrolysed gelatin vehicle. After placement, it causes a release of 2000 /ml chlorhexidine into crevicular fluid as a peak concentration. The drug remains above the minimum inhibitory concentration to more than 99% of the periodontal pocket flora for up to 9 days.

The PerioChip is recognized as beneficial adjunct therapy immediately following the initial treatment phase after scaling and root planing. A recent study examined its value in maintenance patients. Plaque, pocket probing depth, bleeding index, as well as clinical attachment levels were assessed in patients using a split mouth technique for comparison purposes. PerioChips were placed in selected sites, while other sites in the same mouth were devoid of antimicrobial therapy.

Data indicate that the PerioChip is an efficacious adjunct treatment to scaling and root planing. However, the benefit of such adjunct treatment for maintenance patients only becomes apparent after six months, at which time, improvement is seen in pocket depth, clinical attachment levels, and in the bleeding index.

When using the clinical microscope for placement of an aesthetic restoration, the dentist is able to distinguish between material and tooth structure by means of

When using aesthetic materials, filters incorporated onto the microscope can enable the clinician to distinguish between the material and the tooth structure. With the clinical microscope, the dentist can work freely between magnification factors of 2 to 21, while maintaining visual acuity and good posture. The use of an intraoral mirror provides visual access comparable to an endoscope, permitting viewing in any set of axes. Despite the advantages, some dentists regard the use of a clinical microscope as an unnecessary burden. It does take time to adjust to the use of the instrument, but persistence will result in increased skill, precision of hand/eye coordination, and higher quality care.

A patient with chronic periapical infection is at a higher risk for stroke.

Risk of non-haemorrhagic stroke is decreased in patients with good oral hygiene and controlled periodontal disease.

A study conducted in the USA showed that, compared to individuals with good oral hygiene, those with periodontal disease had twice the risk of suffering a stroke. This relationship was found to be true for men, women, blacks and whites. However, this increased risk was only for non-haemorrhagic stroke, where loss of blood flow to the brain was due to a blockage rather than to a ruptured vessel.

Other studies have found a strong association between alveolar bone loss and stroke. Those with high levels of bone loss were almost three times more likely to suffer a stroke than individuals with low levels of bone loss. Although chronic periodontal infection was found to be associated with an increased risk of stroke, the relationship between chronic periapical infection and stroke appeared to be the stronger.

Xylitol is 1. sweeter than sucrose.

A number of studies have shown that chewing of sugar-free gums will reduce caries. Initially, this was believed to be due to increased salivary flow, which enhances the buffering capacity of saliva, thereby neutralizing the decrease in plaque pH that occurs after meals. It has now been shown that chewing gums made up of different constituents can affect the incidence of dental caries. It is, therefore, not just the act of chewing and increased salivary flow that affect the result.

Sugar-free gums contain either sorbitol or xylitol. Sorbitol is 60% as sweet as sucrose. It can be fermented by oral flora, including the microrganisms implicated in caries. Xylitol, on the other hand, is as sweet as sucrose and is not fermented by the oral flora. Studies have shown that all sugar-free gums can decrease the caries onset rate, but gum containing 100% xylitol is the most effective.

Sugar-free gums have also been shown to inhibit plaque growth, reduce the number of streptococcus mutans in saliva and improve gingival health. The data are strongly suggestive that xylitol-containing gum is anticariogenic in human subjects. 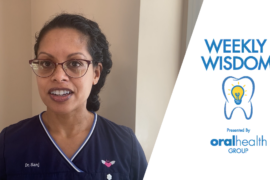