Introduction
In the last decade, as a result of patients’ desires to get the HOLLYWOOD SMILE, full-ceramic restorations have become more popular due to their superior aesthetic appearance and are frequently used in the restorative and prosthetic fields. The development of new materials and improvements in manufacturing technologies have led clinicians to utilize ceramic restorations in more and more cases. Ceramic crowns and veneers aid clinicians in achieving patient satisfaction, because of their excellent optical characteristics and biocompatibility. However, these kinds of restorations are usually adhesively cemented, which makes their removal for the purposes of remake, a challenging and time-consuming process.1 Generally, the removal process is performed by cutting or grinding off the restoration using rotary burrs instead of using potentially painful and damaging mechanical crown-bridge removers. The risk of harming the underlying tooth structure due to the lack of color contrast between tooth, adhesive resin interface and the restoration, makes the remake of ceramic restorations a delicate and time-consuming process. In cases of replacement due to fractures, secondary caries, or gingival recession, the integrity of the veneer following its removal is not important. However, when the removal of the ceramic restoration is required shortly after its insertion because of misalignment during cementation, poor color selection of the luting cement or unexpected inflammatory pulpal responses, keeping the integrity of the restoration becomes critical. Avoiding the cost involved and the time required for re-manufacturing of the crown or veneer is beneficial for both the clinician and the patient. With the conventional removal techniques, it is almost impossible to remove the adhesively luted ceramic restoration in one piece.

To overcome these conventional limitations, the use of laser technology was recently introduced as a more comfortable and conservative technique for veneer removal. 1 Laser de-bonding technique was first described for the removal of ceramic orthodontic brackets, and has been experimentally used since early 1990s. 2 Tocchio et al 3 reported that de-bonding of ceramic brackets happens because of the degradation of adhesive resin, and that laser energy degrades the resin by three different mechanisms: thermal softening, thermal ablation, and photo-ablation. Thermal softening occurs when the laser energy heats up the bracket and resin until the resin becomes soft enough to remove the bracket, but this relatively slow method can lead to a large increase in both bracket and tooth temperature. Thermal ablation is the rapid vaporization of adhesive resin caused by the laser energy that heats up the resin instantly. The last mechanism of photo-ablation occurs when very powerful laser energy interacts with the adhesive resin to raise the energy levels of the bonds between resin atoms above their dissociation levels, resulting in decomposition of the material. 3 The latter two are considered to be the more favorable mechanisms because they proceed so rapidly, the temperature of the resin and tooth surface remain within the physiologic range.

Case Report
A 34-year-old female patient presented to our clinic complaining of recently cemented veneers on the upper six anterior teeth done in another clinic. The patient’s chief complaint was the misalignment of the two central veneers and the shape of the canines bilaterally because they were longer than the other veneers (Fig. 1). The patient was concerned with the time needed for the re-fabrication of the new restorations and the likelihood of fracturing the existing veneers while attempting to remove them, because she had an important social event. The process of veneer removal while preserving the restoration and the underlying tooth structure using the erbium laser technology was explained to the patient, informed consent was acquired. Provided everything went according to plan, the existing veneers would be re-cemented with improved alignment and better aesthetic result. 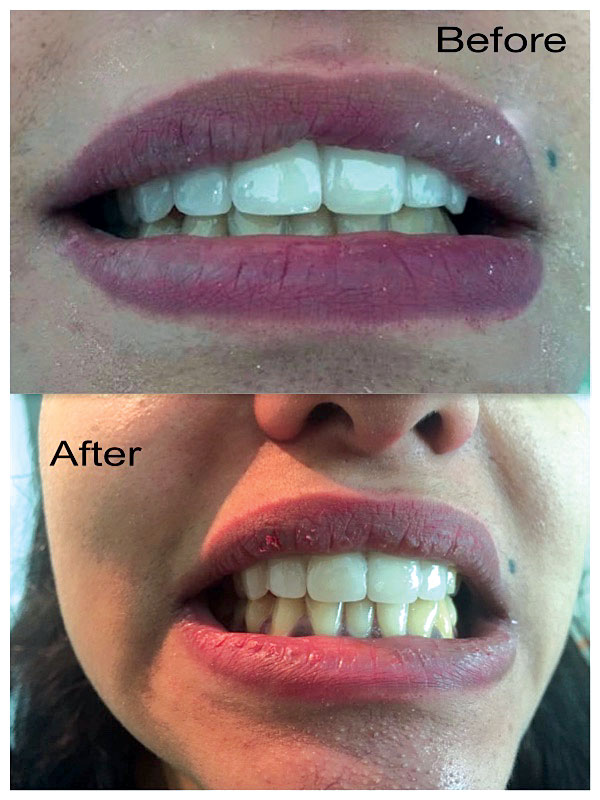 Procedure
The removal of the existing veneers is to be performed using Er,Cr:YSGG laser without preliminary administration of local anesthesia. The injection is to be provided in case of sensitivity, if requested by the patient. 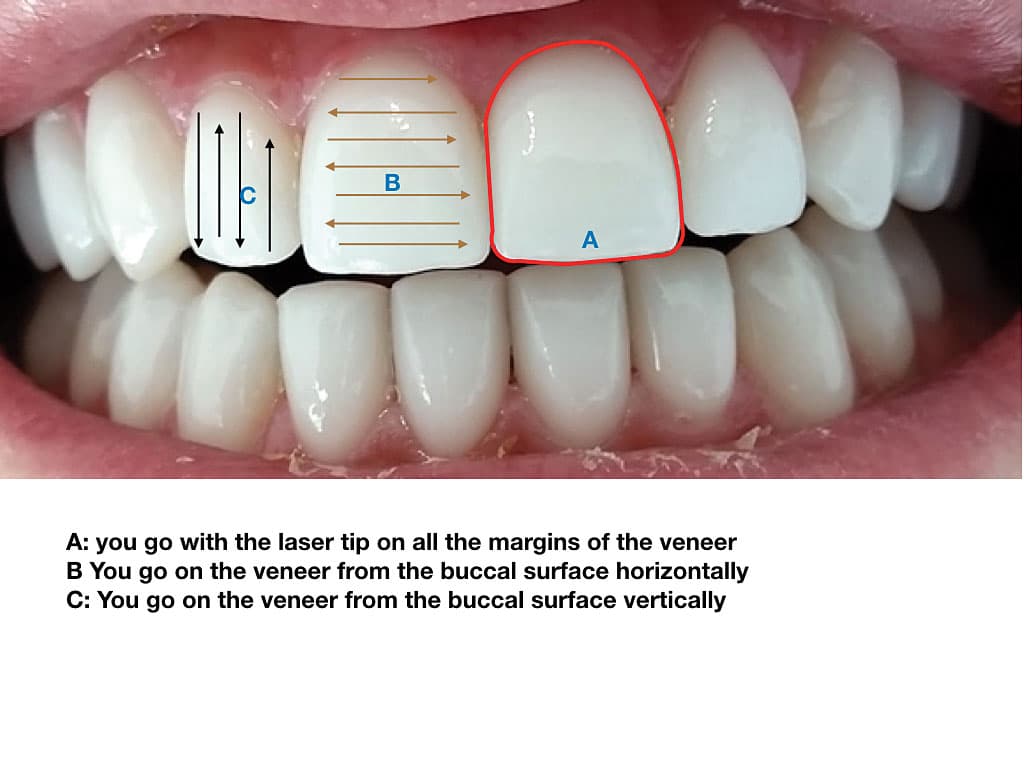 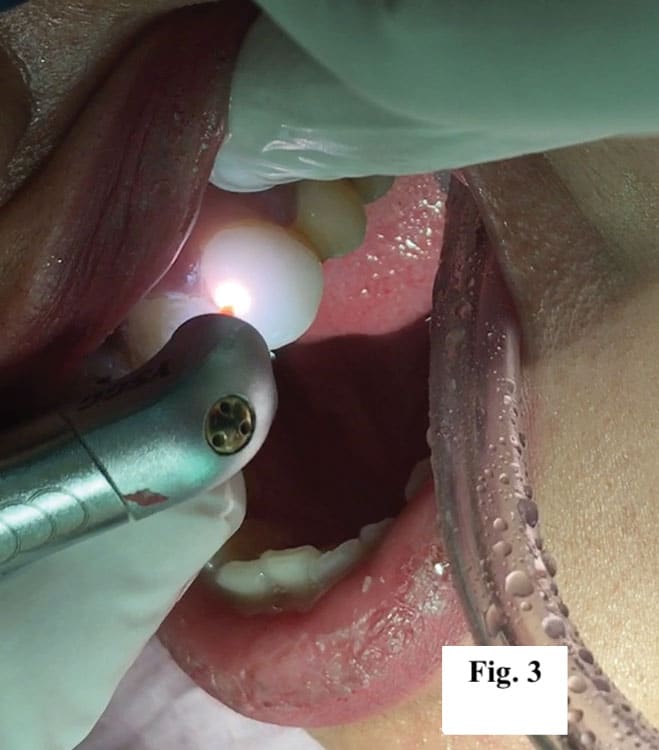 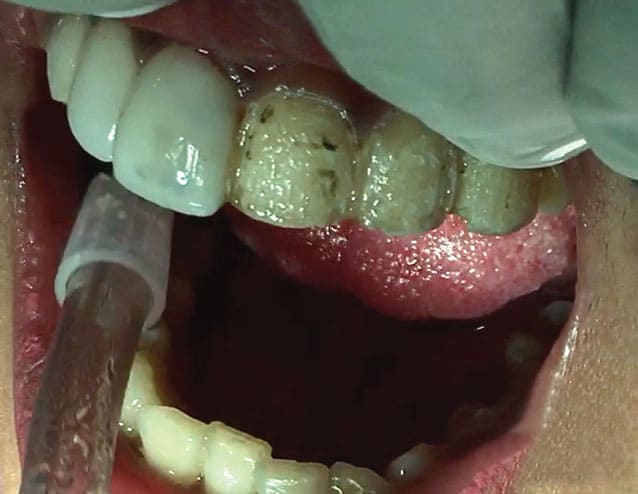 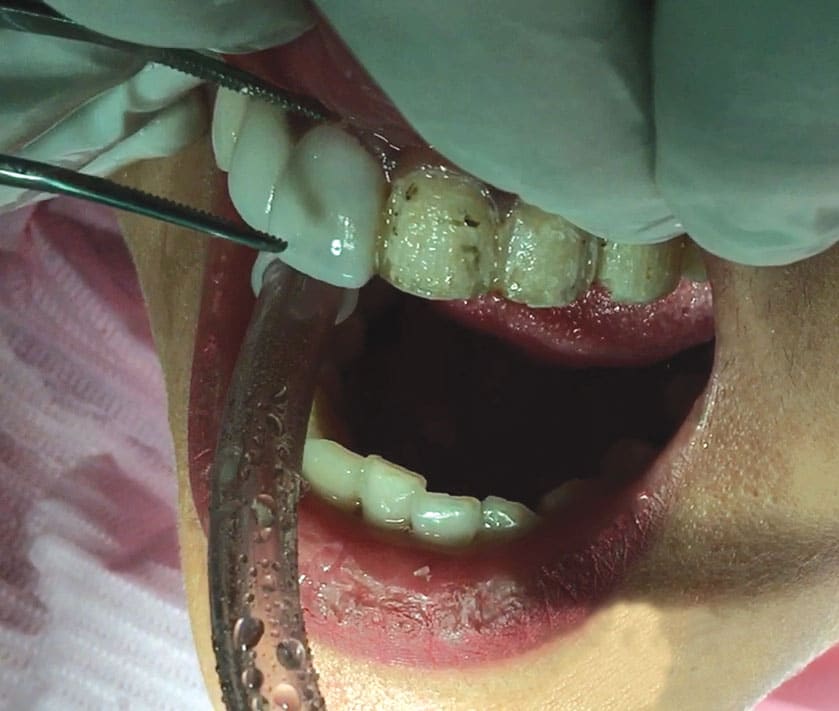 Discussion
The laser de-bonding procedure for all-ceramic restorations has been shown to be easy and safe, in comparison to the conventional techniques. The ceramic materials and hard tissues were evaluated under light microscope after the de-bonding and it was concluded that the bond between the ceramic restoration and the tooth is disrupted mainly at the ceramic/cement interface, leaving the majority of the inner surface of ceramic veneer free of resin cement. Moreover, no ablation craters or even slight marks of ablation were found on the tooth surface. It was also reported that laser de-bonding does not change the chemical surface composition of dental ceramics. 4-8 The clinical protocol described in this case report confirms the findings described in the literature.
During the de-bonding process of all ceramic restorations, erbium laser energy is transmitted through the ceramic and is absorbed in the resin cement. The mechanism of veneer removal using Erbium lasers is mainly based on thermal ablation and photo-ablation of the composite resin cement. 7 Theoretically, in photon-induced thermo-mechanical ablation process, the water in the media or within the material absorbs the energy, vaporizes and rapidly expands, causing subsurface pressure within the enclosed environment of the irradiated material. 9,10 This explains how the process of veneer removal in this case worked without affecting the underlying tooth structure.

Conclusion
We can safely conclude that Erbium laser energy is transmitted through the all-ceramic materials and the amount of transmitted energy depends on the ceramic thickness and the composition. The bonding cement absorbs the energy transmitted through the veneer resulting in the selective ablation of the cement and loosening of the restoration within seconds. This novel technique offers a significant advantage to the clinician in cases where preservation of the existing veneer is preferred. There is also a valuable savings of chair time necessary for the removal and remake of the old ceramic restorations. The use of old veneers as temporary restorations during the interim waiting period may be an interesting option to consider in the interest of saving clinician’s chair time and additional expense for the patient. OH

Dr. Amir Ezzat, DDS, MSc is a graduate of MIU (Misr International University) in Egypt. He is a part owner and a Vice President of DCC (Dental Care Centre) offices in Cairo specializing in laser-assisted treatments. Dr. Ezzat received his MSc degree in Dental Lasers from RWTH University in Aachen, Germany in 2016. He is currently a laser clinical instructor at MIU in collaboration with Aachen University. Dr. Ezzat’s scientific research has been published in peer-reviewed journals, such as Lasers in Dental Science (LIDS). 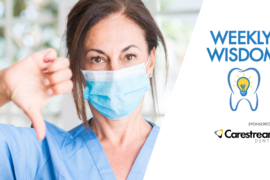