Imagine a tool that could reduce pain, improve wound healing, relieve muscle tension and regenerate nerves without the use of pharmaceuticals and achieved without any side effects. Although it may sound like magic, it is actually a therapeutic technology that has been used clinically for decades: Photobiomodulation (PBM). Historically, other terms have been used to describe these PBM devices, including Low Level Lasers, Soft Lasers, and Cold lasers. However, a recent meeting of Key Opinion Leaders in Washington coined the MeSH (National Library of Medicine’s controlled vocabulary thesaurus used for indexing articles for Medline/PubMed) term that best describes this technology: PBM.

The term Photobiomodulation is derived from the following breakdown:
Photo – light from either a Laser or Light Emitting Diode (LED)
Bio – eliciting a biological response
Modulation – response to the light energy, resulting in either stimulation or inhibition.

Light has been used for decades as a treatment modality for various pathological conditions. In 1903, Niels Finsen won the Nobel Prize for the treatment of Lupus Vulgaris with concentrated light. Early in the 20th century, many physicians recognized the benefit of using light to improve the health of hospital patients and would frequently take their patients to the hospital roofs to sit in the sunlight. To this day, many people suffering from Seasonal Affective Disorder (SAD) utilize light therapy during the winter months to combat depression that can occur when sunlight is at a minimum.

One of the first people to demonstrate the use of light as a therapeutic tool was Dr. Endre Mester in 1966. During an experiment investigating whether a low level laser could cause cancer, he shaved the bellies of two groups of rats and irradiated the skin. This study had two significant findings: 1) laser irradiation did not cause the growth of any cancerous cells; and 2) in the laser-irradiated group, the hair on the stomachs of the rats grew back significantly faster. In a study the following year, he treated wounds on rats with laser devices and demonstrated that laser irradiation resulted in accelerated healing of the wounds. These findings were some of the first indications of the benefits of PBM and inspired hundreds of research groups to investigate the effects of PBM in both the lab and clinic setting.

PBM is the use of light energy from lasers or LEDs to elicit cellular and biological responses in the body. Light photons act on a number of cell processes to stimulate the release of cellular energy (in the form of ATP), which can be used to facilitate the restoration of normal cell morphology and function (Fig. 1).

The cellular response from cells, which follows the Arndt-Schultz law, is referred to as the Biphasic Dose Response. 1 From a clinical standpoint, the biphasic dose response means that a low dose will result in cellular stimulation (e.g. stimulation of fibroblasts for improved tissue healing), whereas a higher dose results in a cellular inhibition (e.g. reduction of inflammatory chemicals) (Fig 2).

This additional cellular energy is also available to power many secondary side effects, which are noted in Table 1.

One of the first FDA approvals for PBM was for the treatment of repetitive strain injury, also referred to as Carpal Tunnel Syndrome (CTS). 2 This condition is incredibly prevalent in Western society as a result of the large amount of time people spend at computers or working in positions that require repetitive movements. CTS is a significant problem in dental offices due to the position in which dentists, hygienists, assistants and receptionists work throughout the day. CTS presents as extreme pain and tingling in the arm, wrist and hand, often requiring anti-inflammatory and pain medications. In more severe situations, surgery is required, which can result in a number of side effects and potential complications. PBM is very effective in the treatment of CTS and can alleviate the pain and tingling in the arms, hands, and fingers. 3 A study investigating the effect of laser therapy in the treatment of CTS found that laser irradiation completely resolved symptoms in 77% of patients and the nocturnal complaints in 93% of patients. 4 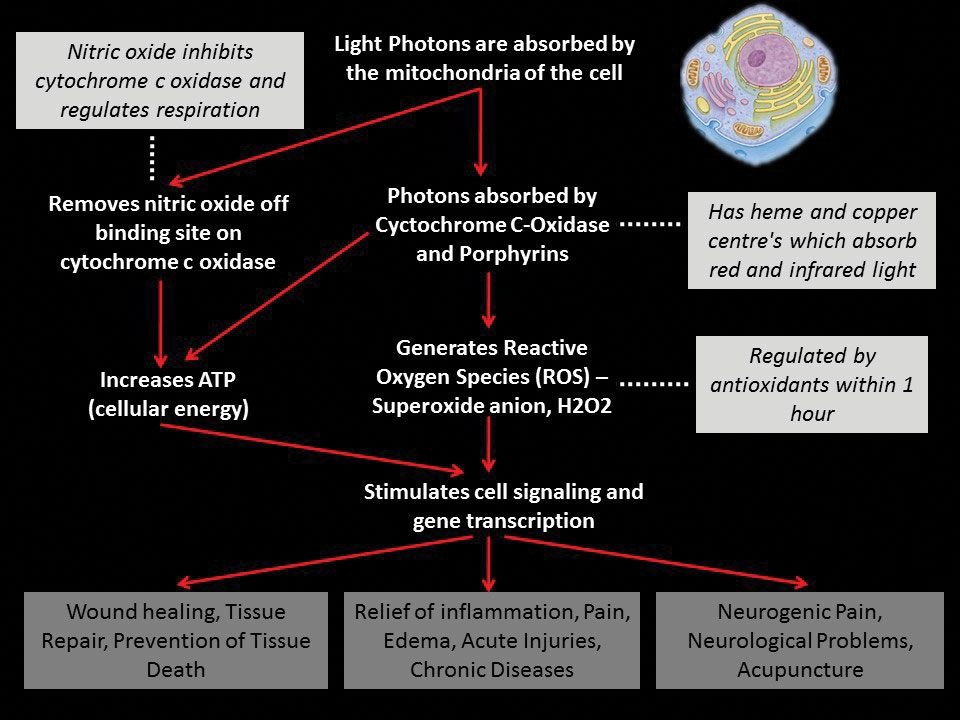 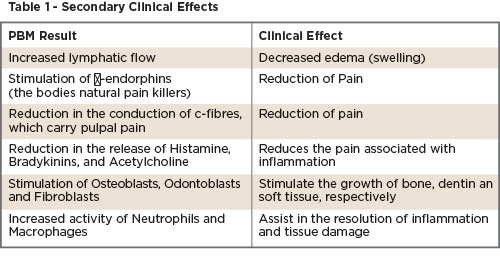 PBM in Dentistry
When most dentists hear the word laser, they often think of a hard or soft tissue lasers that are used to cut enamel or soft tissue. Low Level Lasers and LEDs are another subset of lasers that are relatively unknown to many dental practitioners, yet have the potential to be an invaluable tool to a dental practice and its patients. PBM can benefit almost every aspect of a dental practice, regardless of whether it is a general dental or a dental specialty practice. Stimulation of endorphins; reduction in the conduction of nerve fibres that carry pulpal pain (C-fibres); stimulation of fibroblasts, osteoblasts and odontoblasts (which creates soft tissue, bone and dentin, respectively); and increased circulation and lymphatic drainage can all aid in improving clinical outcomes and decrease the pain felt by a patient after dental appointments.

Some of the most frequently used clinical applications in dentistry include: 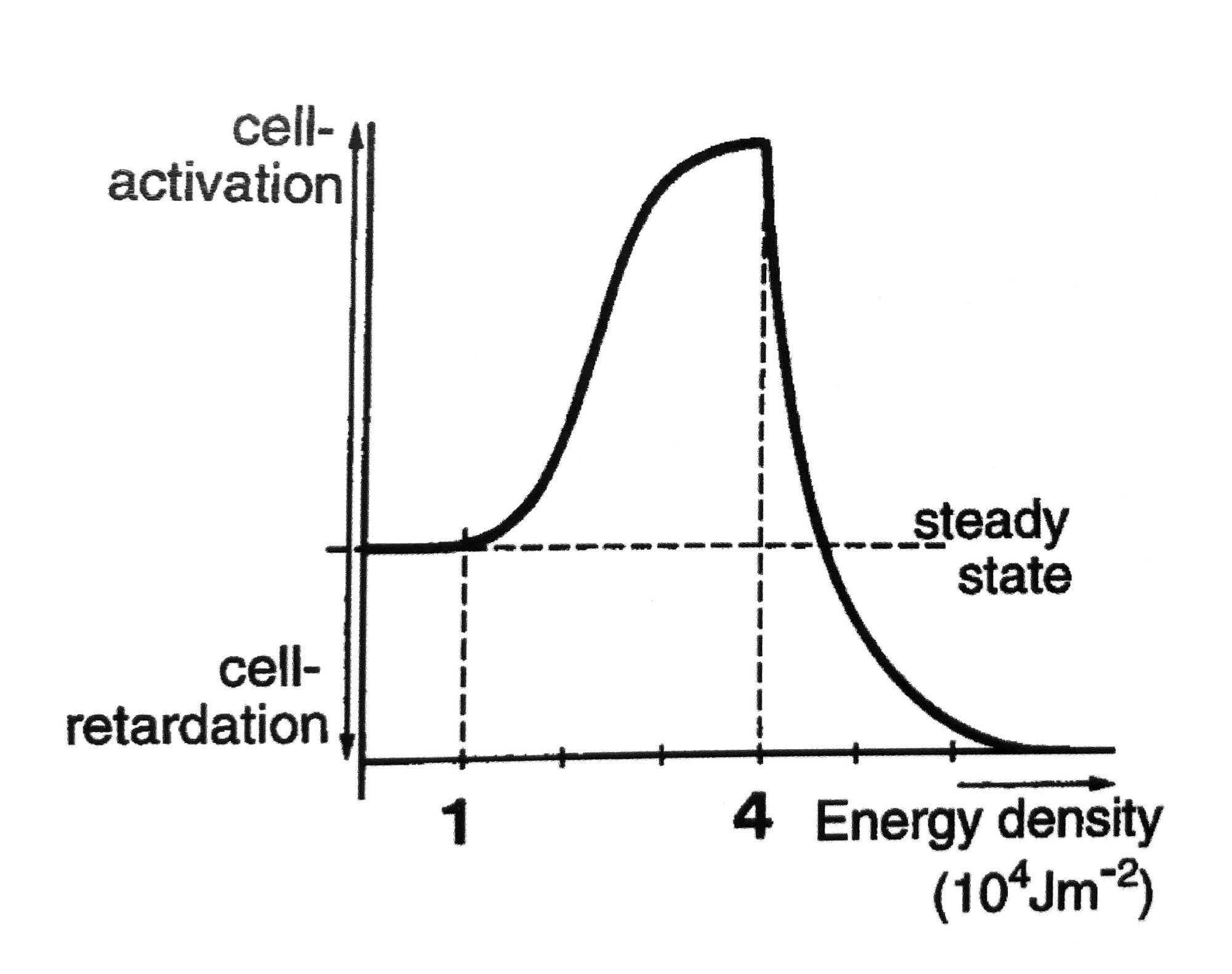 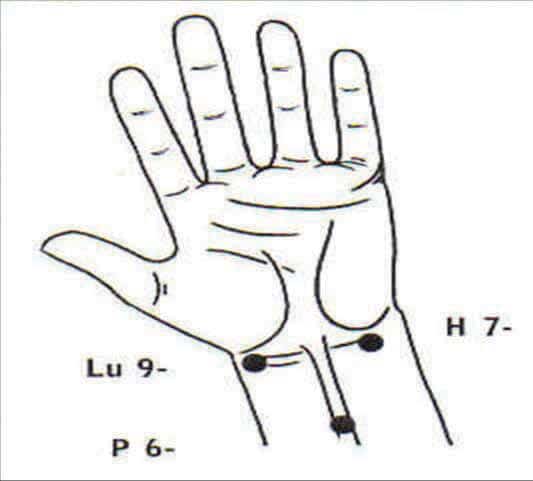 Implants
Laser irradiation during the preparation and placement of implants will decrease the pain and inflammation caused by the surgical procedure and improve the integration of the implant into the bone through the stimulation of the osteoblast/osteoclast turnover. Many studies investigating the effect of PBM during implant placement or bone grafting have demonstrated an improved bone formation around the site with a significant decrease in post-operative pain. 9

Case Study: Implants
One of my patients had implants placed in #25 and #26. At a subsequent follow up appointment after the implants were placed, the bone quality was so poor that the implants could have been removed by unscrewing them with finger pressure. The implants were covered and the patient returned twice a week for two weeks for PBM therapy. A dose of 4J/cm2 (low dose for stimulation) was placed the Buccal and Lingual surface of the implant to stimulated osteoblasts to obtain maximum possible bone density. At a 5-year follow-up, there has been no bone loss surrounding the implant (Fig 6: September 9th, 2012; Fig. 7: November 1st, 2017) 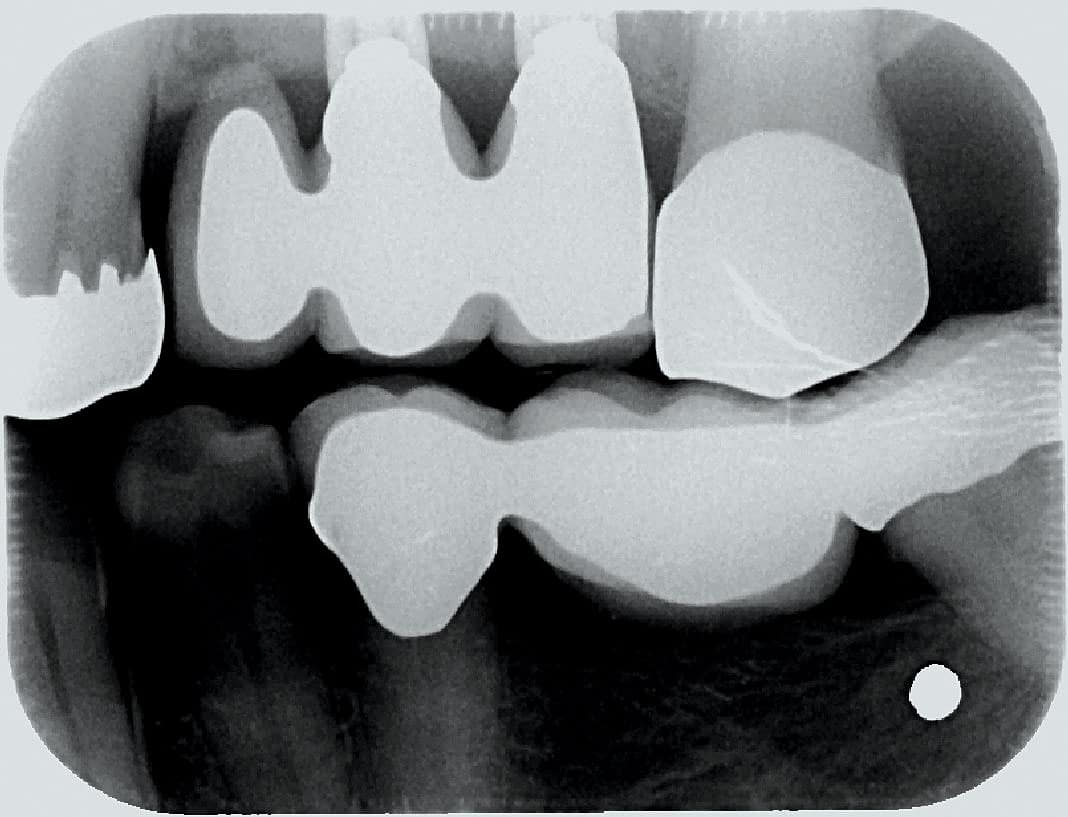 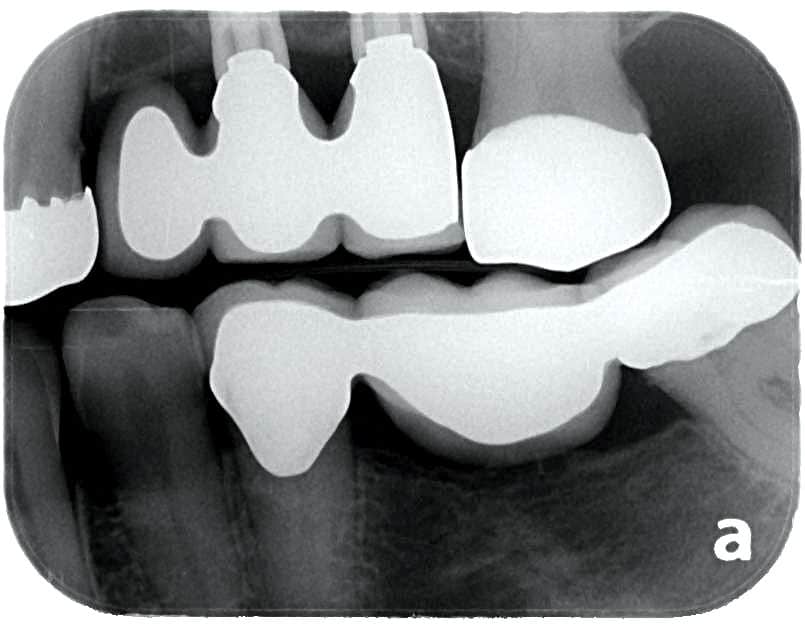 Facial Pain/Neuralgia
PBM can be used very effectively for the treatment of acute and chronic facial pain. A major complaint many patients have after long dental appointments is facial pain and muscle tension in the jaw. 10 Application of the laser to the masseter muscle after the appointment will reduce or eliminate the muscle trismus and joint pain (Fig. 8). In chronic TMJ cases, PBM can be used in conjunction with other therapeutic tools to reduce the pain and muscle tension, while stimulating healing within the joint. There have also been a number of clinically documented cases of successful treatment of neuropathic pain/ neuralgias using PBM instead of very strong medications that are commonly prescribed in these cases. 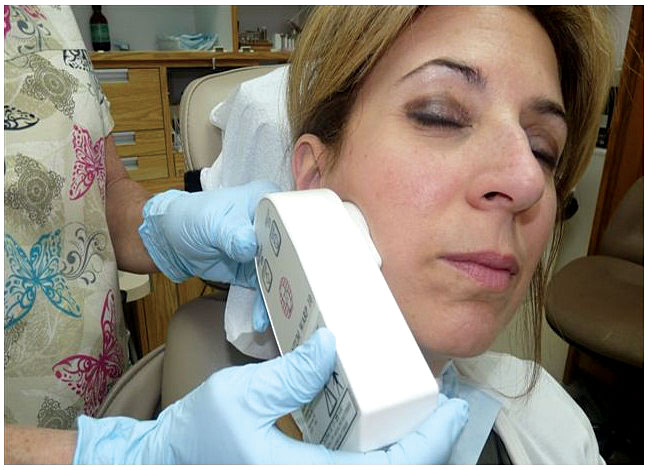 Case Study: Nerve Regeneration and Neuropathic Pain
A referral patient presented with paresthesia in the lingual nerve. The patient had received a mandibular block and at the time felt a burning sensation in his tongue. Four weeks later, the lingual gingiva and one side of the tongue were still numb. In addition, the patient complained about a loss of taste sensations. This involved a number of different cranial nerves and was neuropathic (centrally mediated) in nature.

A low dose to stimulate nerve regeneration was used at the site of the injury and all along the path of the nerve. The tongue was irradiated with a large cluster probe containing 80 diodes. In addition, the trigeminal ganglion was also irradiated to help with the neuropathic pain. This was done three days a week for three weeks, upon which the patient reported a partial return of sensation in the lingual nerve but only a slight improvement in the loss of taste. The patient was dismissed for three weeks to allow continued healing from the initial PBM treatments. At the end of this period the patient was re-assessed and all nerve sensations had retuned and there was some improvement in the loss of taste. Two months later, full taste sensation returned.

Soft Tissue Lesions
Soft tissue lesions, such as herpes lesions, denture sores, angular chelitis and lichen planus, respond very well to PBM. Research has indicated that laser irradiation can prevent cold sores from erupting if treated in the prodromal stage (when the tingling starts) and speed the healing in cases where the sore has erupted. More recently PBM has been shown to be an excellent modality in treating or preventing mucositis which is often a debilitating side effect of chemotherapy. 11 Patients present with sores (similar to herpes lesions) along the lips, mucosa, palate and pharynx, making eating and drinking incredibly painful. Medicine has not found a satisfactory treatment for this debilitating condition and it is one of the two major complications that lead to stopping or postponing chemotherapy treatments.

Nerve Regeneration
PBM has been demonstrated to be a very effective modality in stimulating the regeneration and healing of damaged nerves. Clinical successes have been demonstrated in cases of nerve damage following wisdom tooth removal, orthognathic surgery and injection complications.12

Is PBM Safe?
In several thousand studies done on Photobiomodulation, no clinical side effects have been reported. Photobiomodulation merely restores ATP levels in the mitochondria to normal levels, so it is the body’s normal healing mechanisms which deliver the clinical result.

Return on Investment
Many of the procedures discussed in this article have direct billing codes (e.g. dentin hypersensitivity, acute muscle/nerve, etc.). In addition, there are a number of indirect reimbursements. In many procedures, PBM results in a reduction of post-operative complications, which result in patients returning to the office for a follow up procedures, usually performed at no charge. Instead, this chair time can be used for fee producing procedures.

Where Can I Learn More
Journals: The two leading PBM Journals are Photomedicine and Laser Surgery and Lasers in Medical Science. Both are evidence-based, peer-reviewed journals that are a tremendous resource for any practitioners utilizing, or thinking of including, PBM in their practices.

Textbooks: Two of the best PBM textbooks are Handbook of Low-Level Laser Therapy13 and The New Laser Therapy Handbook. 14

Organizations
World Association of Laser Therapy (WALT), North American Association for Photobiomodulation (NAALT) and Academy of Laser Dentistry (ALD), which has a large PBM section at their meetings.

Conclusion
A huge benefit of PBM is that patients see their dental practitioner doing something extra to reduce the pain or discomfort that may have been caused during the appointment. The very nature of what dentists do causes pain and inflammation. PBM requires a paradigm shift; instead of using drugs to treat the pain after it has started, a dentist now has the opportunity to treat the pain immediately in the dental office and in many cases, mitigate the pain sensations before they are felt by the patient. In an aging population that is becoming wary of the over-prescription of pharmaceuticals, which often carry negative and harmful side effects, PBM is an effective alternate or adjunctive tool to achieve improved clinical effects. It is a benefit to the dental practitioner and patient to investigate PBM, an untapped and underutilized resource in the dental industry. OH

Dr. Gerry Ross has been practicing General Practice Dentistry with a special interest in Facial Pain in Tottenham, Ontario, since 1971. He has been using Lasers in his practice since 1992. He has given over 200 courses and lectures on the subject both nationally and internationally and published 15 articles. He has written chapters for two textbooks and does Peer Review for four Laser Journals. He holds Advanced Certification and is a Certified Course Provider from the Academy of Laser Dentistry (ALD), as well as fellowship status in American Society of Lasers Medicine and Surgery. In 2016, he was awarded the Leon Goldman Award from ALD as the year’s outstanding laser clinician.

RELATED ARTICLE: One Must Open The Window To Let The Light In…

Marketing In A Digital World