The conventional wisdom has traditionally been that, all things being equal, it didn’t matter what was put into root canal systems to obturate them. The old saying “What you take out is more important than what you put in” dominated thinking to a significant degree. Such a statement was often followed up by something along the lines of “You can put bird droppings in root canals” and patients would heal if the cleansing and shaping were ideal. One view of the root canal process was that instrumentation and irrigation were primary and obturation was of secondary importance.

1) To entomb most surviving bacteria.

2) To stop the influx of periapical tissue-derived fluid from reaching surviving bacteria in the root canal system.

3) To act as a barrier, thereby preventing re-infection of the root canal, i.e. provide a coronal and apical seal.

It is important to mention briefly that it is axiomatic (as reported in the Endodontic literature) that there is no single way to consistently create bacteria free root canals. This dovetails with the first of the three principle functions listed above: to entomb most surviving bacteria. Said differently, there will be bacteria left within the root canal system at some level even with the most diligent cleansing and shaping procedures. While this might seem a license to give limited attention to canal cleansing (in addition to creating excellent canal shapes), nothing could be further from the truth. Bacterial control (asepsis created through proper irrigation and mechanical preparation) is essential for clinical success. Said differently, reducing the bacterial counts within canals to the lowest levels achievable is consistently demonstrated in the endodontic literature to be consistent with healing.

How is this microbial control accomplished? While a comprehensive discussion of this subject would require a textbook, several points can be highlighted. As a brief aside, it is also important to distinguish that cleaning is affected by the canal contents at the time the clinical case is begun. Simply put, necrotic teeth have a less favourable clinical prognosis than vital teeth. While the implications of this cannot be addressed in detail, suffice to say that there is a strong body of evidence that necrotic teeth and retreatment cases are best treated in two visits with an interim dressing of calcium hydroxide to create the greatest possible canal cleanliness aside from the two factors listed below:

1) Copious irrigation. What constitutes an ideal irrigation regimen depends on the individual clinicians interpretation of the endodontic literature as it relates to microbial control. For the author, the regimen is a combination of 5.25 % sodium hypochlorite, 2% chlorhexidine (Vista Dental products, Racine, WI, USA), and SmearClear (SybronEndo, Orange, CA, USA). Smear clear is used to open tubules and clear the smear layer for application in bonded obturation with RealSeal (SybronEndo, Orange, CA, USA). SmearClear is the last irrigant used to facilitate optimal bonding of canals. Sodium Hypochlorite is used for gross flushing and dissolving of pulpal contents. Chlorhexidine is roughly equivalent to sodium hypochlorite in effectiveness but does not dissolve tissue. It has significant value in the treatment of necrotic canals as well as for challenging clinical situations such as blunderbuss canals and open apices of all types whether created iatrogenically or not.

For an average molar tooth, approximately 70-150CC of solution is used. Sodium hypochlorite and chlorhexidine are not mixed as they form a precipitate that can be challenging to remove. As a result, SmearClear can be used as an alternative solution if the clinician wishes to move between sodium hypochlorite and chlorhexidine or vice versa as it will flush out the first solution to make way for the second and avoid the creation of the precipitate.

2) Instrumentation that facilitates ideal irrigation is of key importance. Irrigation, as outlined above, can be made practical and efficient through the creation of ideal canal shapes in instrumentation. Such ideal canal shapes would include shapes that possess narrowing cross sectional diameters as well as follow canal anatomy, are free of iatrogenic events, maintain the minor constriction of the apical foramen at its original position and size as well as are large enough for the given root. This last statement, while due to space limitations cannot be elaborated upon in detail bears mention. Canal preparations that are too small, restrict the amount and flow of irrigants deeper within the canal system. There is ample evidence in the Endodontic literature that larger apical preparations if carried out properly can provide the cleanest possible canals both through the removal of circumferential dentin as well as providing greater volumes of irrigation more apically in canals.

Blending the two considerations above, copious irrigation and instrumentation, an additional and critical issue must be considered. The placement of irrigants, the length of time in which the irrigants are in place so as to be biologically effective and the volume of irrigants used that promote an antimicrobial effectiveness that provides the greatest level of bactericidal activity are all critically important.

Rotary nickel titanium instruments (RNT) can create canal shapes very quickly and effectively. It is possible with a system like the K3 (SybronEndo, Orange, CA, USA) which cuts well, is fracture resistant and has an excellent tactile feel to prepare a 4 canalled molar tooth in approximately 5-10 minutes in its totality if the RNT files are used appropriately, if the canals have been negotiated and the proper glide path created.

Said differently, the K3 can prepare a canal rapidly and efficiently, but such a preparation is a mechanical one only. K3 can prepare the space inside the canal very well, but the microbial contamination and its elimination within the canal cannot be accomplished by instrumentation alone. Keeping this in mind is important in that we do not want to simply view the process of root canal instrumentation in simply mechanical terms, it must be viewed as a biomechanical cleansing which allows the combination of irrigants and shaping by RNT and hand instruments to symbiotically cooperate to facilitate the function of the other. Said differently, files make way for irrigants and irrigation removes not only bacteria but also canal debris.

Removal of canal debris reduces the chances for iatrogenic events such as ledges, blockages of debris, separated instruments and other such avoidable events. In clinical terms to use 4-10cc of sodium hypochlorite in a molar tooth is simp
ly not enough to achieve the optimal cleansing possible nor is it a volume that can effectively flush debris from the canal system so as to prevent a build up of tissue and canal debris that might lead to the aforementioned blockage and iatrogenic potential.

Bonded obturation, after ideal cleansing and shaping, can provide a seal that is, and has been demonstrated, to a statistically significant degree; to provide a greater seal than gutta percha. Such a seal can prevent the percolation of tissue fluids back into the canal system. For a comprehensive discussion and technique guide for bringing bonded obturation into their clinical regimens the reader is directed to www. oralhealthjournal.com/issues/ISarticle.asp?id=152890&story_id=23669151352

In summary, it matters what is placed in canals, now more than ever.

Dr. Mounce is in private endodontic practice in Portland, Oregon, USA. Dr. Mounce is the author of a comprehensive DVD on cleansing, shaping and packing the root canal system for the general practitioner. The material is also available as audio CD’s and as a web cast pay per view. For information: Comfort@MounceEndo.com

Dr. Richard Mounce is in private endodontic practice in Portland, OR, USA. Dr. Mounce is the author of a comprehensive DVD on cleansing, shaping and packing the root canal system for the general practitioner. 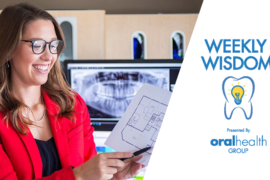