Despite the fact that degradation and dissolution of gutta-percha (GP) and sealer (SE) jeopardize positive treatment outcomes, these legacy materials are still used in diverse protocols for root filling canals. 1 This paper reviews the historical cognitive dissonance in endodontics; the biochemical seal created by GP and SE diminishes over time with negative sequelae and yet, they remain the gold standard of obturation. Bioceramics possess physical, chemical and biologic properties that demonstrate the ability to overcome the limitations of traditional root filling materials. They are bioinert (non-interactive with biological systems), bioactive (interactive with surrounding tissues) and biodegradable (eventually replaced or incorporated into tissue). These properties facilitate conservative root canal shaping, thus preserving natural tooth structure (Figs. 1A-1D).

Fig. 1A
Bioceramic scaffolds are porous structures that facilitate cell penetration and tissue-in-growth. 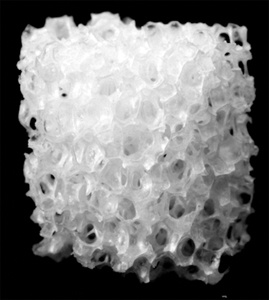 Fig. 1B
SEM of root section filled with gutta-percha (GP) and AH Plus® Root Canal Sealer (SE). Note the gap between the GP, the SE and the dentin (attribution Drs. Ørstavik and Eldeniz).

Fig. 1C
Canals were filled with EndoSequence® BC Sealer™ and sectioned at sequential distances from the apex. The GP cone facilitates dispersion of the sealer into the apical seat and irregularities of the root canal space (attribution Drs. Trope and Debelian).

Fig. 1D
Microstructure of calcium orthophosphate cement after hardening. Mechanical stability is provided by the physical entanglement of crystals. 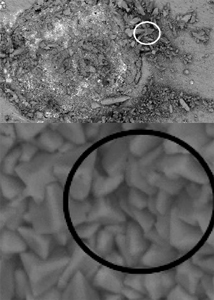 Objectives of Root Filling
Debridement, disinfection and the prevention of reinfection are the mandates of root filling. Endodontic disease is a biofilm-mediated infection. The most common endodontic infection is caused by surface-associated growth of microorganisms. The application of the biofilm concept to endodontic microbiology depends on understanding the pathogenic potential of root canal microflora which requires new approaches for disinfection. 2,3

There are three basic requirements for a root filling material: 1. Prevent coronal leakage after the root canal is filled and the final restoration placed; 2. Entomb surviving microflora in the interfacial dentin so they cannot reassert their presence and communicate with the periradicular tissues; 3. Prevent influx of periapical fluids to provide nutrients for residual microflora in the root canal space.

Gutta-Percha and Sealer
Gutta-percha was discovered in 1656 by John Tradescant and introduced to medicine by Dr. William Montogmerie in 1831. In 1867, G. A. Bowman used GP cones as the sole material for root filling. 4 It was not until 1925 that U.G. Rickert recommended the use of SE with a GP cone. 5

The clinical performance of classic root filling materials substantiates what Aristotle expressed as historical truth; practical individuals study not the eternal principle but the relative and immediate application. 6 In vitro, in vivo and clinical outcome studies done on single cone or lateral condensation techniques demonstrate failure of their primary function, sealing. 7,8 Salivary hydrolytic enzymes have the ability to break down the coronal seal. Microbial products destroy and decompose GP resulting in the loss of adaptation of GP to canal walls thereby reducing the coronal seal and by extrapolation, the apical seal. 9-12

History: Lateral Condensation
Lateral condensation techniques (LC) enhance the ability to control the length of the root filling. However, if there is poor canal preparation, inadequate application of pressure or a mismatched speader and GP cone, residual spaces between the GP cones are filled with SE. LC has a low core/sealer ratio which potentiates apical leakage. 13 Sabeti et al found no difference in treatment outcomes when a root filled canal was compared to a canal left empty 14 (Fig. 2). This study and others emphasize the poor quality of current root filling techniques and the importance of a coronal restoration for positive treatment outcomes. Furthermore, there is an overriding technical flaw with LC; overzealous application of apically directed pressure can result in vertical root fractures. 15-17

Fig. 2
Chart shows in vitro evaluation of saliva penetration in the root canals. The seal achieved with GP alone is indistinguishable from the negative control (attribution Drs. Khayat et al). 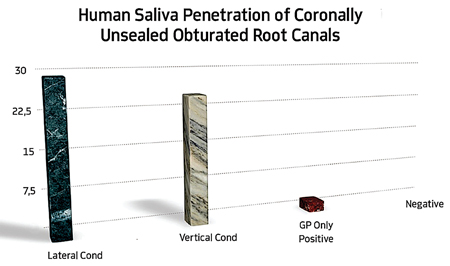 The Schilderian Epoch
Dr. Schilder’s transgressive articles, Vertical Compaction of Warm Gutta-Percha and Filling Canals in Three Dimensions address technical adjustments to traditional obturation techniques. Warm vertical condensation (WVC) enabled GP to replicate the microstructural anatomy of the root canal space to a demonstrably greater degree than any previous technique. 18,19 Despite the enhanced rheology, GP neither adhered to nor penetrated the interfacial dentin. The SE was integral to achieving a positive treatment outcome. Schilder and Goodman 20 established the hypothesis that WVC pushed a greater volume of filler material into the apical space and theoretically the material would not shrink on cooling; however, regardless of enhanced gravitometrics, leakage studies on GP alone and GP and SE showed their inability to create an impervious apical seal. 21

Carrier Based Obturation
The prototype of carrier based thermoplasticized GP obturators (CB) was developed by Dr. W. B. Johnson in 1978. Traditionally, the beta formulation of GP was used for its improved stability, hardness and reduced stickiness. Alpha phase gutta-percha was chosen for CB as it demonstrates low viscosity, it flows with less pressure or stress and creates a more homogenous filling. 22
The latest iteration of CB is GuttaCore® (Dentsply Sirona), a system made entirely of GP with a core obturator prepared with cross-linked gutta-percha. This method of obturation appears to have significantly less voids and gaps than lateral condensation. 23

The volume of sealer is the weak link in the chain of success; volume must be minimized by the density of the core/filler regardless of the technique used. With the new array of equipment for identifying, shaping and cleaning the root canal space, reliance on ineffective materials and techniques mandate a paradigm shift in root filling. When tested in an in vitro model, microbes will permeate the length of the canal space in two hours if only gutta percha is present in the canal without sealer. The leakage can be delayed for up to 30 days with the use of sealer. Traditional sealers generally shrink on setting and wash out in the presence of tissue fluids 24 (Fig. 3) whereas bioceramic SE do not. 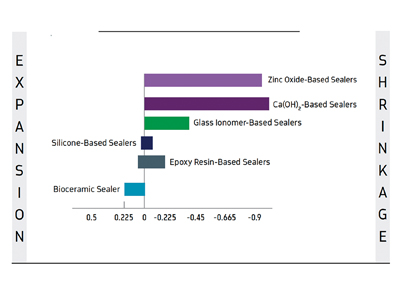 Bioceramic Nano-Technology: The Reckoning
Bioceramic materials (calcium phosphate) include alumina, zirconia, bioactive glass, hydroxyapatite and resorbable calcium phosphates. 25-29 They are used as joint or tissue replacements in both medicine and dentistry as they are chemically and dimensionally stable, biocompatible and osteoconductive. Bioceramic sealers are composed of tricalcium silicate, dicalcium silicate, colloidal silica, calcium phosphate monobasic, calcium hydroxide and a thickening agent. Zirconium oxide is used as the radiopacifier and the material is aluminum-free. The chromogenic effects of all root sealers increase when excess sealer is not removed from coronal dentin of the pulp chamber. 30

Bioceramics are ideal for use in endodontics as they are not affected by moisture or blood contamination and, therefore, technique sensitivity is not an issue unlike most other sealers where moisture negates their performance. Being that they are hydrophilic, residual moisture in the canal and dentinal tubuli are biochemically a positive factor. In the context of creating an impervious seal, they are dimensionally stable and expand slightly on setting, ensuring a long-term seal due to the hydration reaction forming calcium hydroxide and later dissociation into calcium and hydroxyl ions. 31 In vitro testing by Prati and Gandolfi stated that bioceramic materials can expand by 0.2-6% of their initial volume. 32 In addition, they are shown to penetrate into dentinal tubules at a greater degree than AH Plus in both single cone and warm vertical techniques (P< 0.05). 33

Bioceramic material may be an essential element in indirect and direct pulp capping and pulpotomy procedures that are an integral part of endodontic therapy’s goal of maintaining the vital pulp to ensure a healthy periradicular periodontium. For all these reasons, premixed bioceramic materials are seen as an alternative material of choice for pulp capping, pulpotomy, perforation repair, root end filling and obturation of immature teeth with open apices, as well as for sealing root canal fillings of mature teeth with closed apices. 34,35

When setting, the pH of the bioceramic is above 12 due to a hydration reaction forming calcium hydroxide and dissociation into calcium and hydroxyl ions which could explain the antibacterial properties of bioceramics (Fig. 4A). The release of calcium hydroxide and its interaction with phosphates on contact with tissue fluids forms hydroxyapatite. This may explain the osteo-conductive potential of the material (Fig. 4B). 36 Calcium phosphate is the main inorganic component of the hard tissues (teeth and bone). Consequently, the literature notes that many bioceramic sealers have the potential to promote bone regeneration The amount of Ca2+ released from Endosequence BC Sealer is far higher than that from AH Plus mainly after seven days. A concordance was also observed between pH and the amount of Ca2+ released in both analyzed materials. A possible explanation for the high amount of Ca2+ released by bioceramic cements could be associated with setting reactions, including hydration reactions of calcium silicates. 37 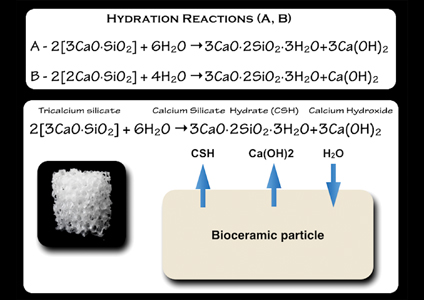 Fig. 4B
Precipitation reaction of the bioceramic (calcium phosphate). The hydroxyapatite co-precipitated within the calcium silicate hydrate phase produces a composite-like structure, reinforcing the set
cement. The bioactivity of the calcium-silicate-based materials has been shown to produce mineralization within the subjacent dentin substrate, extending deep within the tissues. 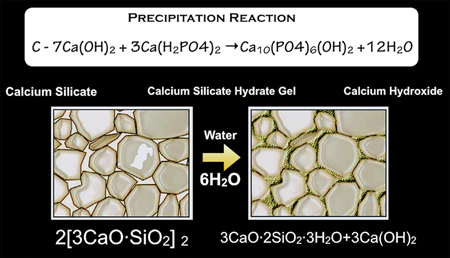 A Scientific Paradigm Shift in Root Filling
As the root filling paradigm shifts to bioceramic sealers, the practitioner can execute a bio-minimalistic antimicrobial protocol for root canal treatment leaving a thicker and stronger root. Bioceramic SE is used with a dedicated GP cone impregnated and coated with nanoparticles of bioceramic thus eliminating the gap between the core and sealer. This combination has been shown to be similar or better than conventional endodontic sealers as observed in in vitro and in vivo animal studies. 38

Fig. 5A
After irrigation, the canal is dried (moisture enhances set of bioceramic SE) and a mated taper GP cone is fit to WL (final irrigation with EDTA results in higher bond strength values for bioceramic SE than either CHX or NaOCl). 39 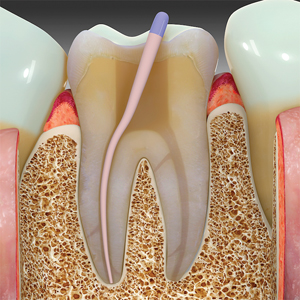 Fig. 5B
Bioceramic GP and SE show promise of resistance to the fracture of endodontically treated teeth; in an in vitro study. 40 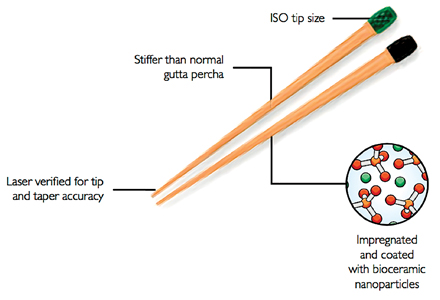 Fig. 6
An aliquot of EndoSequence BC sealer is injected into the coronal and middle thirds of the root canal space using tips designed for the sealer cartridge. 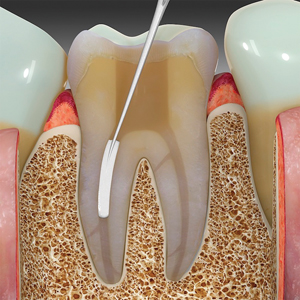 Fig. 7
The Lentulo spiral is calibrated 2-3 mm short of the apical terminus. Slow-speed rotation in a forward mode disperses the sealer flow down the tip of the spiral. 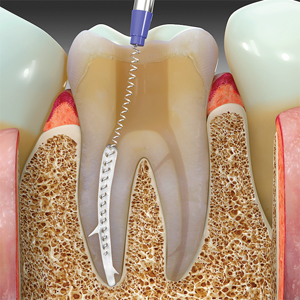 Fig. 8A
The pre-selected GP cone is buttered with sealer and slowly introduced into the canal to seating. The GP at the interface of the orifice is marked and the cone retrieved in a counter-clockwise manner. 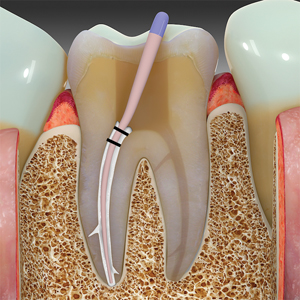 Fig. 8B
A 2-3 mm segment is removed from the coronal aspect of the GP cone. The cone is then buttered with sealer, reintroduced into the canal space and tapped to seating with a condenser. It is not advisable to use heat to remove the GP as it desiccates the bioceramic (SE). 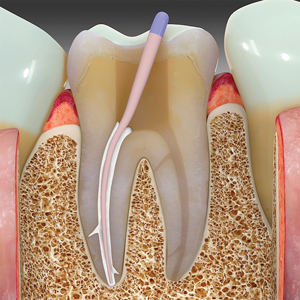 Fig. 9A
The depth of the footing is calibrated for core and post channel creation. 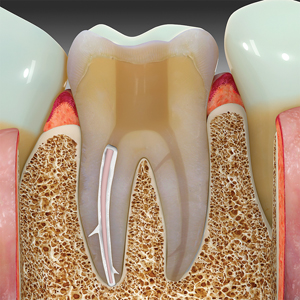 Fig. 9B
Endodontic biominimalism is extended by the use of fibre posts of small tip size and matched taper. 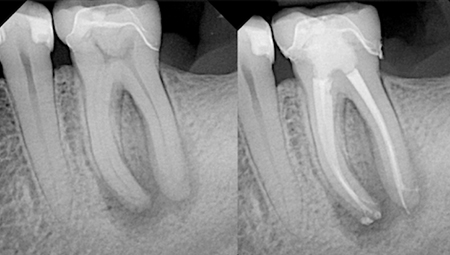 Conclusion
All variables in an equation are interdependent. In the case of endodontic success, each procedural event is accountable for positive treatment outcomes; however, regardless of its importance, if a concomitant event doesn’t provide a suitable biologic conclusion, failure ensues. Biominimalism in root canal space preparation requires a root filling material that replicates the internal anatomy of the root canal space, adheres to interfacial dentin and creates an impervious, irreversible seal at all portals of exit. The last mile of the bioceramic endodontic marathon will be to obviate the need for a gutta-percha core of any formulation. OH

Ken Serota, DDS, MMSc, graduated from the University of Toronto Faculty of Dentistry in 1973 and received his Certificate in Endodontics and Master of Medical Sciences degree from the Harvard-Forsyth Dental Center in Boston, Massachusetts. Active in online education since 1998, he is the founder of the online forums ROOTS and NEXUS. Dr. Serota is a clinical instructor in the University of Toronto postdoctoral endodontics department.

RELATED ARTICLE: Increasing Use of Bioceramics in Endodontics: A Narrative Review