Can Omega-3 Fatty Acids Be Used as a Beneficial Adjunct to Scaling and Root Planing?

Periodontitis is an inflammatory disease that affects the hard and soft tissues that surround the teeth and is estimated to affect 10-15% of the world population.1 Following the 2017 world workshop on the classification of the disease, a system was created to encompass the staging and grading of the disease.2 There are four stages (I, II, III, IV), where the severity and complexity of the disease is examined. If the disease reaches the most advanced stage, stage IV, this can lead to a reduced quality of life, tooth loss and potentially a need for complex rehabilitation. In addition, the three grading rates (A, B, C) relate to rate of periodontitis disease progression, with grade C as the most rapid. Incorporated into the grading system are modifiers that are risk factors that increase the rate of disease progression, which includes smoking and diabetes. Depending on the number of teeth affected by the disease, periodontitis can either be localised, molar-incisor pattern or generalised. Generalised periodontitis affects 30% or more teeth, whereas localised periodontitis affects less than 30% of teeth and molar-incisor pattern of periodontitis affects the 1st molars and incisors.3

There have been links proposed between oral health and systemic health with examples such as poor diet and diabetes being linked to periodontitis.5 The WHO seeks to promote healthy living. One of its recommendations is a balance in the ratio of omega-3 fatty acids (O3FA) and omega-6 fatty acids (O6FA) from dietary intake.6

The western diet is imbalanced with an overly high O6FA: O3FA ratio. The recommended ratio should be between 1:1 and 4:1, while the western diet often has a ratio at between 15:1 and 17:1.7 These fatty acids are derived from dietary sources, and the ratio imbalance created is associated with hypertension and stroke. A high intake of dietary O6FA sources such as meat, eggs, and vegetable oil can lead to increased inflammation in the body.8 O3FA are polyunsaturated fatty acids which are derived from foods such as chia seeds, flax seeds, walnuts, and salmon. (Fig. 1) Alpha-linolenic acid is converted to eicosapentaenoic acid (EPA) and docosahexaenoic acid (DHA). The latter two have an important role as precursors for lipid-derived modulators in the inflammatory process.9 The role is to counteract the pro-inflammatory properties produced by arachidonic acid (AA), but also to produce anti-inflammatory eicosanoids and resolvins. (Fig. 2) Resolvins act on a local level to prevent neutrophil recruitment and on a systemic level to reduce C-reactive protein; this highlights the inflammation lowering attributes of resolvins.10 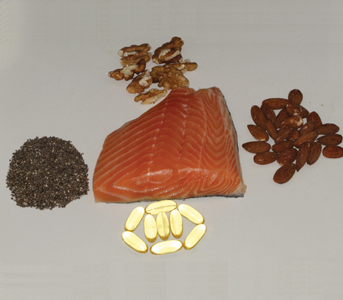 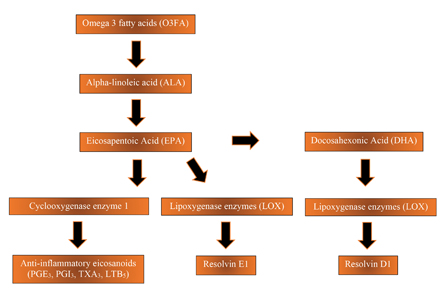 There has been research investigating the role of O3FA in improving both general health and oral health.11 The evidence suggests that increased O3FA intake lowers the effect of chronic diseases including: rheumatoid arthritis, type 2 diabetes, and coronary heart disease.12

Aims and objectives
Following the review of the literature, the aim is to collate the available data and establish whether there is enough evidence to support O3FA as a beneficial adjunct to SRP. The research could potentially highlight a cost-effective recommendation for clinicians treating periodontitis. The purpose of the systematic literature review of the available literature is to determine whether periodontitis patients, when taking O3FA supplements as an adjunct to SRP, have a better response following treatment, compared with patients who have not received O3FA.

To measure whether O3FA is a beneficial adjunct to SRP, the clinical parameters PPD, CAL, BI and GI will be used.

METHODS
The initial search of the available literature was conducted between 22nd January 2019 and 13th November 2019 to answer the aims and objectives. (Fig. 3) Once the data was screened and assessed by both authors (MM and AH), the quality of the evidence and findings from the randomised controlled trials (RCTs) were documented. 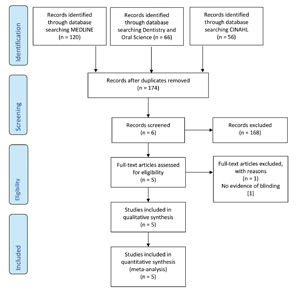 The above figure is a PRISMA figure that has been adapted from the preferred reporting by Moher et al of systematic reviews.13

RESULTS
The findings included 262 chronic periodontitis patients aged between 30-65 years in 5 RCTs, from four countries in three different continents. Once confounders had been identified and excluded, the following findings were supported for up to 6 months of continued daily consumption of O3FA. From the research, there was evidence that the clinical parameters, BI, GI, PPD and CAL can all be improved when O3FAs are taken. (Table 1) 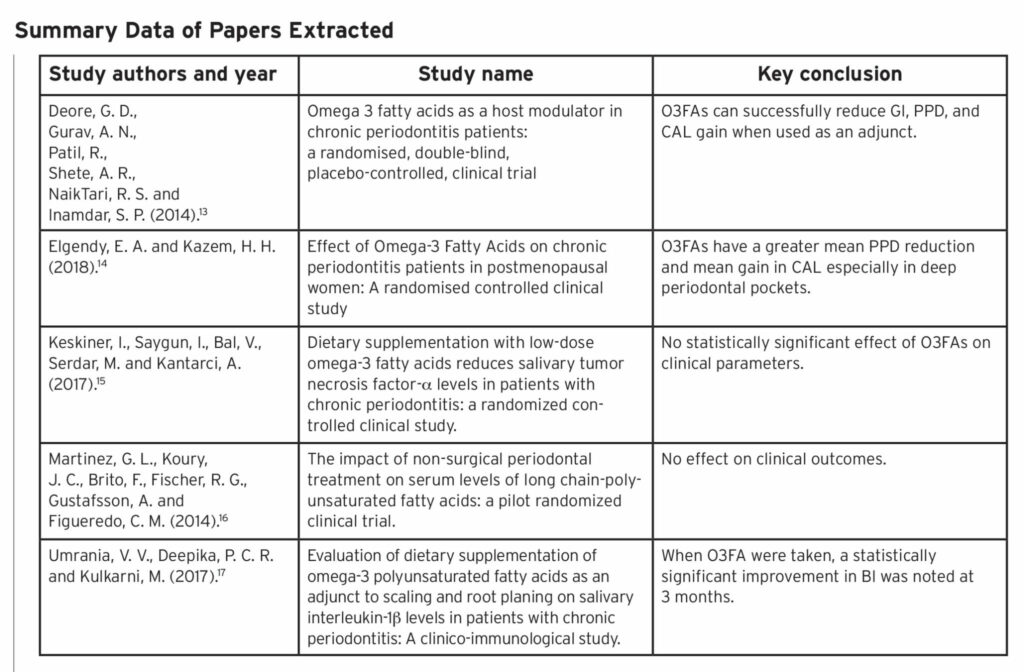 DISCUSSION
The aim of the review was to appraise the available evidence on whether O3FA can be used as a beneficial adjunct to SRP. From the literature, this review highlights that although heterogeneity of the study designs exist, O3FA does influence clinical parameters. Three of the five studies give a clear indication that O3FAs are beneficial, whereby the clinical parameters GI, BI and PPD were reduced, whilst CAL was gained. This highlights that O3FA as an adjunct can help the treatment of periodontitis when used with SRP.

A limitation of the studies, where the outcome had no effect, was likely due to the low number of participants to make a noticeable difference. In these studies, there were higher reductions in the O3FA group compared to the control for GI and BI, but the reductions were not statistically significant, as stated by the authors.16

A recent systematic review and meta-analysis by Kruse et al reported similar finding with respect to the positive effects of O3FA on CAL and PPD following non-surgical periodontal treatment.19 Furthermore, work from Naqvi et al investigated whether docosahexaenoic acid (DHA) in combination with aspirin can improve periodontitis compared with placebo and aspirin. The outcome was that in the absence of periodontal treatment, DHA with and without aspirin caused a decrease in PPD and GI.20 This significant improvement suggests that the anti-inflammatory effect by DHA is beneficial in the management of periodontitis. Eicosapentaenoic acid (EPA) has also been found to be beneficial, whereby adults with a higher EPA content, had a higher number of teeth remaining.21

The overall positive findings when O3FA is used as an adjunct to SRP, are consistent with recent literature and anecdotal experiences from multiple patients. Figure 4 shows a case from the main author (MM) where significant improvements were shown in a previously poorly responding patient. The patient had an initial round of SRP with O3FA used as an adjunct. Results were reviewed after a 4-month interval.

Patient before SRP and prior to O3FA introduced to the diet.

CONCLUSION
With a growing trend in society to be more health conscious, the dental profession has a privileged role to give diet advice as part of a preventative approach to oral diseases.

Diet advice forms part of prevention along with OHI. In a similar way to advising patients to reduce a cariogenic diet for caries prevention, we can advise patients on the role of O3FA for potential periodontal benefits. Within the limitations of the review, the findings suggest that O3FA supplementation can be recommended as a cost-effective adjunct to SRP in the treatment of periodontal disease.

Dr Morris is currently a second year Periodontics Resident at the University of Dalhousie, having previously completed a master’s degree in Clinical Periodontology in 2020. He is a qualified health and nutrition advisor, and his research interests focus on the links between diet and periodontal diseases.

Dr Hassan graduated in 2014 and he is currently an Academic clinical Fellow in Primary Dental Care at the University of Liverpool, UK. He is funded by the National Institute of Health Research (NIHR) where he combines his roles in general dental practice, dental hospital, and research. His research interests include oral health and cardiovascular disease.