Traumatic injuries to teeth and their supporting structures comprise approximately five percent of all traumatic injuries.1 Clinical and radiographic examinations are integral parts of diagnosis and treatment planning. Occlusal and periapical images have been suggested to determine the extent of damage to dentoalveolar structures. Due to their limitations as two-dimensional imaging modalities, it is necessary to take several images with different angulations to visualize the area of interest. Cone Beam Computed Tomography (CBCT) has recently been used extensively in all aspects of dentistry. Several studies showed that CBCT is valuable in diagnosis of dental horizontal root fractures and alveolar fractures.2,3,4 According to the American Association of Endodontics (AAE), CBCT should be the imaging modality of choice for diagnosis and management of limited dento-alveolar trauma, root fractures, luxation, and/or displacement of teeth and localized alveolar fractures.5

The aim of this case report is to present two cases of dento-alveolar trauma showing the importance of having three-dimensional imaging for the diagnosis and treatment planning.

Case Report #1
A young male (21 years old) with recent trauma to face was referred for assessment of a loose maxillary incisor. Upon clinical examination, tooth 1.1 was mobile and tender to palpation and percussion with fingertip. Tooth 1.1 was nonresponsive to cold testing. A periapical radiograph revealed a horizontal fracture line at cervical third of the root (Fig. 1). 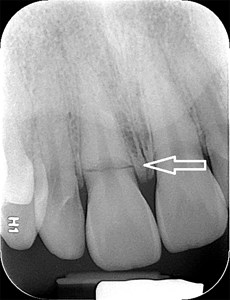 Pre-operative radiograph of tooth 1.1, revealing a fracture line at cervical third of root.

Treatment options of extraction or trying to save the tooth with splinting with guarded prognosis were presented and he chose to have the tooth splinted. The patient was advised to go for a CBCT to better investigate the location and direction of fracture line. The splint was placed and the patient was booked for six-week follow-up and review of the CBCT (Fig. 2).

The patient did not come to the follow-up appointment and did not respond to our calls and letters. Four months later, the patient contacted our office complaining of pain with tooth 1.1. He came in for a follow-up with a recent CBCT.

On the CBCT, two displaced fracture planes were present within the root of tooth 1.1. A horizontal fracture extended through the coronal third of the root at the level of the alveolar crest, and an oblique fracture extended from the buccal aspect of the apical third of the root to the palatal aspect of the cementoenamel junction (Figs. 3-5). This tooth was deemed non-restorable and the patient was informed that tooth 1.1 required extraction. No periapical pathology was present, but the buccal cortical plate was thin and partially dehiscent adjacent to tooth 11. Signs of internal resorption at apical third of root canal were also noted. 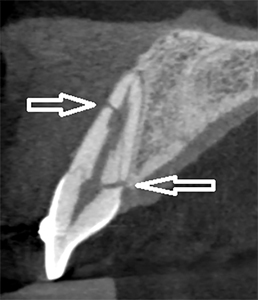 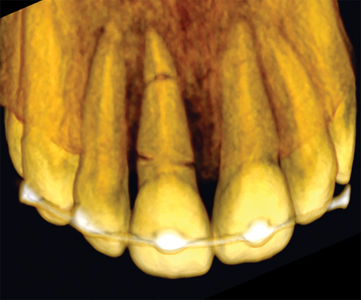 Case Report #2
A female patient (47 years old) was referred due to trauma to her anterior teeth. She had fallen and crowns of both 1.1 and 2.1 were displaced palatally (Fig. 6). Teeth were repositioned and splinted by her dentist, and soft tissue lacerations were sutured (Fig. 7). On clinical examinations both teeth were not responsive to sensibility tests. The periapical radiograph showed slight widening of periodontal ligament space. The patient was sent for a CBCT to rule out dentoalveolar fractures (Fig. 8). 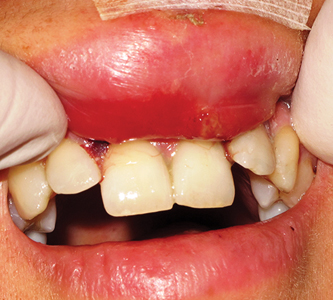 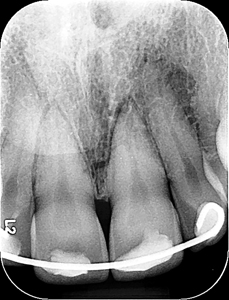 On CBCT the anterior maxillary alveolar process showed a mildly displaced fracture, which extended through the buccal and palatal cortical plates adjacent to the midroot level of teeth 1.1 and 2.1 (Figs. 9-11). No signs of root fracture were present on teeth 1.1 and 2.1, but both teeth appeared to be subluxated (Fig. 12). 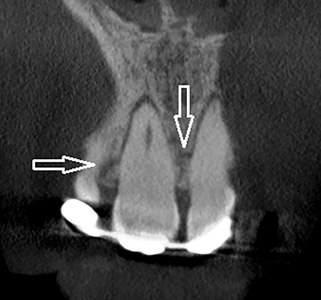 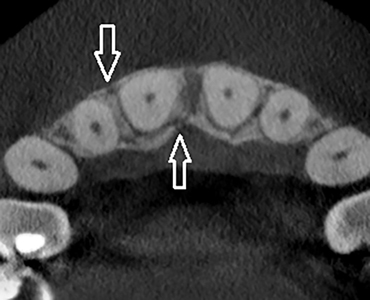 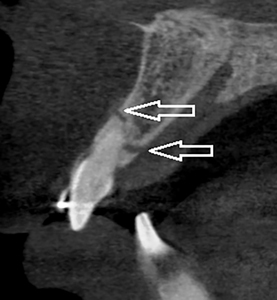 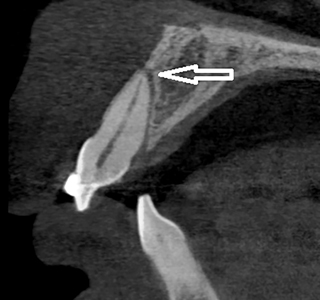 On the four-week recall, teeth 1.1 and 2.1 were not responsive to sensibility tests and were discolored. Root canal therapy was done on both teeth and the patient was referred back to her dentist to remove the splint (Fig. 13).

Proper diagnosis and treatment planning in dentoalveolar traumatic injuries require collection, analysis and interpretation of information gathered from clinical and radiographic examinations. CBCT technology is a fast and efficient modality to provide sufficient information in these situations. The above mentioned cases are showing that without a 3D image, we may not be able to see the exact extent of trauma and the patients may not receive proper treatment. OH

Dr. Yosef Nahmias was born and raised in Mexico City. After he had graduated from the Universidad Tecnologica de Mexico, School of Dentistry, in 1980 with a degree in dentistry, he decided to advance his education and chose Endodontics as his specialty. Dr. Nahmias has been a practicing Endodontist in Oakville, Ontario since 1983.

RELATED ARTICLE: The Role of the Dentist in Recognizing Orbital and Ocular Trauma