External cervical resorption occurs at the level of epithelial attachment of gingiva, which is located at cervical area of the tooth, if there is no major gingival recession.1,2 The resorbing tissue invades dentine and can involve limited spots on tooth surface to extensive destruction of tooth structure.

External cervical resorption lesions are classified into four types, based on the extent of tooth structure involved:

Class 1 – Denotes a small invasive resorptive lesion near the cervical area with shallow penetration into dentine.

Class 2 – Denotes a well-defined invasive resorptive lesion that has penetrated close to the coronal pulp chamber but shows little or no extension into the radicular dentine.

Class 3 – Denotes a deeper invasion of dentine by resorbing tissue, not only involving the coronal dentine but also extending into the coronal third of the root.

Class 4 – Denotes a large invasive resorptive process that has extended beyond the coronal third of the root.2

Radiographic examinations play a major role in determination of the extent of resorption and accessibility of lesion for treatment, and the prognosis of the treatments. Usually resorptive lesions are first seen on conventional intraoral radiographs. Due to inherent limitations of these two-dimensional images, it may be difficult to differentiate internal resorption and external cervical resorptive lesions. Cone Beam Computed Tomography (CBCT) provides a three-dimensional view of the resorption and is much more accurate than periapical radiographs in diagnosing the presence, size and nature of the root resorption.4,5

In this article, some cases of external cervical resorption will be reviewed, emphasising on the importance of CBCT in diagnosis and treatment planning, and preventing exploratory treatment attempts with more uncertain results.

Case #1: A 73-year-old male was referred to our office due to a radiolucent area on tooth 2.1. His medical history showed hypertension, diabetes, and heart murmur. In the referral, it was mentioned that there is an internal resorption defect on tooth 2.1. Clinical examination revealed slight tenderness on palpation of attached gingiva of this tooth with sensibility tests within normal limits. There was no mobility and probing depths were normal. Periapical radiograph showed a circular radiolucent area on cervical third of root at the level of crestal bone (Figs. 1 & 2). 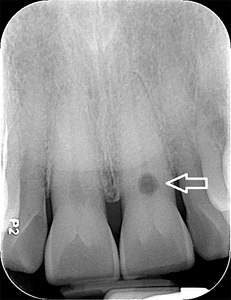 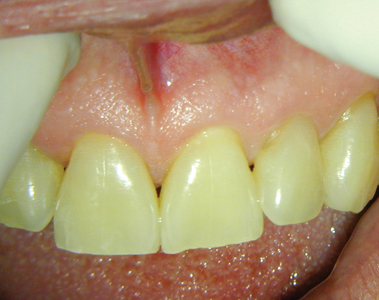 Patient was referred for a CBCT of the tooth in question to better investigate it. On CBCT image, the buccal surface of the root of tooth 21 exhibited external resorption involving the coronal third of the root. This resorption extended from the surface of the tooth to the depth of the root canal system, but no evidence of periapical pathology was associated with tooth 21. The resorptive defect was well-defined and confined to the supracrestal portion of the root, which suggested it might be amenable to repair (Figs. 3 & 4). 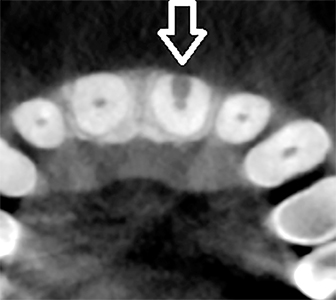 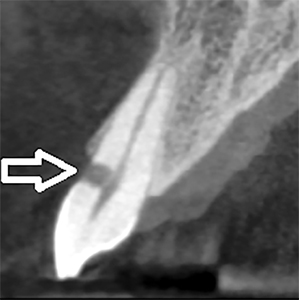 Treatment options were presented as either extraction and replacement with implant, or root canal therapy followed by surgery to remove the resorbing tissue and seal the defect. Patient was willing to try to save the tooth, and took the second option. Root canal treatment was completed on tooth 2.1 (Fig. 5). Surgery was also completed and facial defect was cleaned, and sealed with Geristore (Figs. 6-9A & 9B). 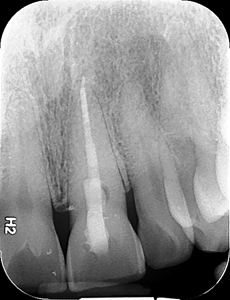 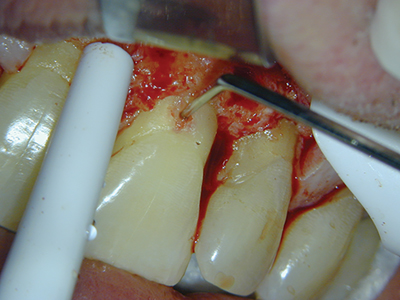 Figure 7
Intra-operative photograph of surgery on tooth 2.1 after removal of resorptive tissue and cavity preparation. 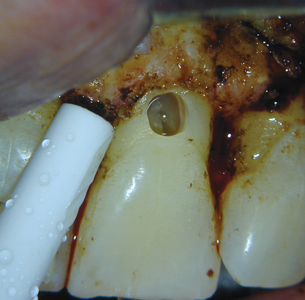 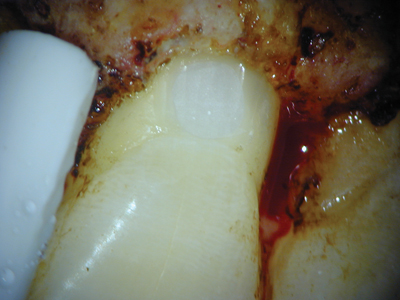 Figure 9A
Final radiograph of tooth 2.1 after completion of surgery. 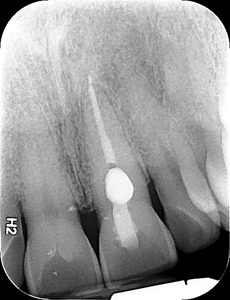 Figure 9B
Clinical Photograph three days after the procedure at the suture removal appointment, note remarkable healing of the soft tissues. 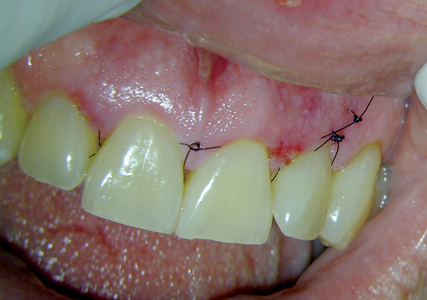 Case #2: A 52-year-old male was referred to our practice by his hygienist after a recent tooth cleaning. There was slight tenderness on buccal gingiva of tooth 3.2. On the periapical radiograph a large radiolucency was noted involving cervical area of tooth 3.2 (Fig. 10). The patient was advised that there is an external cervical resorption lesion that has eroded tooth structure at gum level. He was informed that prognosis for treatment of this is unpredictable and if he wants to try to save the tooth, we will need a CBCT to investigate the extent of the lesion and feasibility of repair. 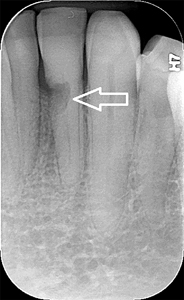 CBCT image showed that the mesiobuccal surface of tooth 3.2 exhibited a well-defined area of external resorption, which was limited to the coronal third of the root.
Although this resorptive defect abutted the root canal system, no periapical pathology was present. The presence of subcrestal extension suggested this defect may not be amenable to repair (Figs. 11 & 12). 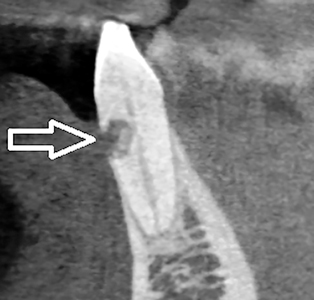 Figure 12
Axial view of CBCT image of tooth 2.1, showing the position of resorption. 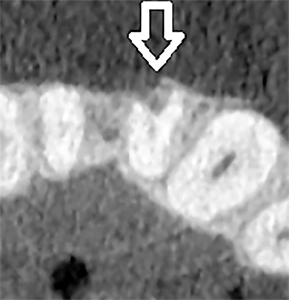 CBCT was reviewed with patient and due to poor prognosis of the tooth 3.2, he was sent back to his dentist for extraction.

Case #3: A 47-year-old female was referred for a radiolucent area on tooth 3.7 (Fig. 13). The tooth was asymptomatic and all sensibility tests were within normal limits. She was already referred for CBCT, and external resorption was present on the mesial surface of tooth 37 at the level of the cementoenamel junction (Figs. 14 & 15). The lesion was confined to the supracrestal region of the tooth. The pulp chamber of the tooth was not affected. The periphery of the defect was well-defined, and it seemed to be amenable to repair. The periapical bone appeared normal. 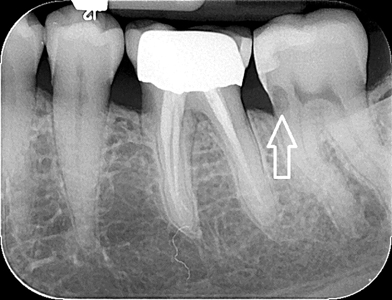 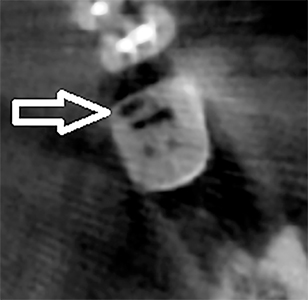 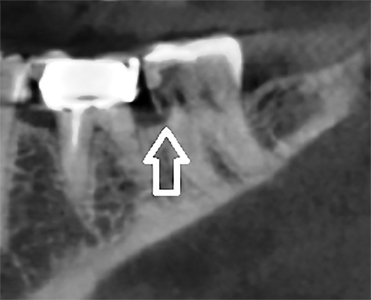 The options of orthograde root canal treatment, followed by a crown lengthening surgery to remove the lesion, and placement of crown, or extraction and replacement with implant were presented. Patient was motivated to try to save the tooth, although she was aware that the prognosis was questionable. Root canal treatment was done on tooth 3.7 followed by initial crown preparation, sealing the defect, and placement of temporary crown by her dentist. Crown lengthening surgery was rendered and the temporary crown was re-cemented. Final crown preparation and fabrication was postponed until periodontal healing (Figs. 16 & 17). 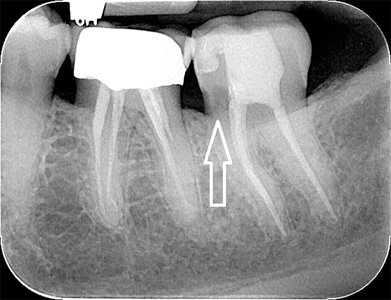 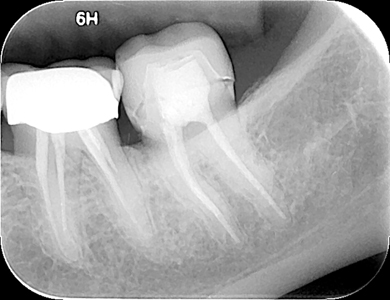 Case #4: This patient was a 44 year-old man referred due to a resorptive defect seen on periapical radiograph of tooth 4.7 (Fig. 18). Tooth was slightly sensitive in chewing. Sensibility tests were within normal limits. He was sent for a CBCT to better investigate the lesion and to assess the feasibility of treatment. Extensive external resorption was evident within the crown and coronal third of the mesial root of tooth 4.7. The resorption appeared ill-defined and continuous with the root canal system of this tooth, and appeared to extend slightly subcrestally. There was no evidence of periapical or periradicular pathology in tooth 47. The position of this resorptive defect suggested that it may not be amenable to repair (Figs. 19 & 20). 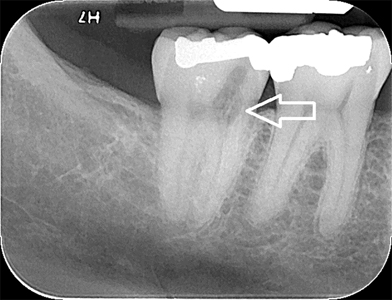 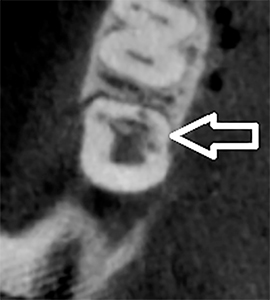 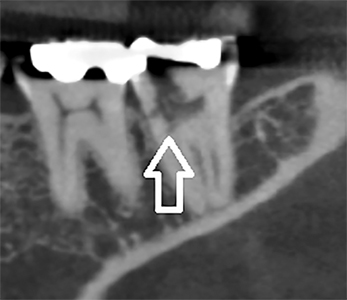 Treatment options of combined root canal therapy and periodontal surgery with guarded prognosis, or extraction and replacement with implant were presented. The patient chose the option of extraction, and he was referred back to his dentist.

In conclusion, external cervical resorption might be a challenging entity for the practitioners to diagnose and treat. CBCT provides precise information regarding the position, extent, accessibility for treatment, and the prognosis. It is strongly recommended to take CBCT before suggesting any kind of treatment to save the tooth. OH

Dr. Yosef Nahmias was born and raised in Mexico City. After he had graduated from the Universidad Tecnologica de Mexico, School of Dentistry, in 1980 with a degree in dentistry, he decided to advance his education and chose Endodontics as his specialty. Dr. Nahmias has been a practicing Endodontist in Oakville, Ontario since 1983