Cleidocranial Dysplasia: An Insight Into Genetics and Dental Management

With a frequency rate of one in one million individuals, cleidocranial dysplasia (CCD) is considered a rare disorder.1 CCD (also known as cleidocranial dysostosis) is a well defined disorder of bone development with characteristic clinical manifestations presenting in an autosomal pattern of inheritance affecting both sexes and all ethnic groups equally.1-4 CCD is characterized primarily by the absence or partial absence of the clavicles. Clavicular hypoplasia resulting in narrow, sloping shoulders that can be brought in toward the midline of the body is a common feature in CCD.1-4 People with CCD tend to have very late closure of their sutures of the skull and soft spot and at times, cranial sutures in individuals with CCD may never close.

Another major finding in CCD is multiple dental abnormalities as is found in almost 94% of people affected.5 The palate is often highly arched and clefts involving hard and soft palates may be present. Extra teeth (up to 30 additional teeth in some instances), delayed eruption of secondary dentition, failure to lose the primary teeth, supernumerary teeth with dental crowding, and malocclusion can all be present. Bone development is disrupted in the areas of the maxilla, the nasal and lachrymal bones.

In addition to these more common findings, people may have an unusual shape to the skull, a depressed nasal bridge, prominent chin, widely spaced eyes, narrow chest or bell shaped chest, increased mobility, scoliosis or kyphosis, short tapering fingers, broad thumbs and an inturning of the fifth finger. Individuals with CCD are often shorter in stature than their unaffected brothers or sisters. Males are generally six inches shorter than unaffected brothers and girls are on average three inches shorter than unaffected sisters.6 Additional medical problems include recurrent sinus infections and other upper airway complications, recurrent ear infections and possible hearing loss, high incidence of cesarean section, and a mild degree of motor delay in children under age five years.1-6

Cleidocranial dysplasia is inherited in an autosomal dominant fashion. To understand the importance of this inheritance pattern, a basic understanding of genetics is helpful. Every person has 46 chromosomes in every cell of the body. There are 22 autosomal numbered pairs and two sex chromosomes, XX in females and XY in males. Every individual inherits one copy of each pair from their mother and the other copy from their father. The chromosomes carry approximately 20,000-25,000 genes which, like the chromosomes, come in pairs. The members of the gene pair code for the same trait but are not necessarily identical. In autosomal dominant inheritance, the gene in question is carried on one of the autosomes or numbered chromosomes and when there is an alteration or mutation in this gene, it behaves in a dominant fashion. This means that if an individual carries a single copy of this mutation, the body will show some of its effects. An individual with a dominantly inherited genetic mutation has a 50% chance of passing the mutation to his or her own children with each pregnancy. Not every person with the genetic mutation is affected in the same fashion and there can be a great deal of variability in the way that the condition presents itself. Occasionally, the signs may be so minimal as to go undetected unless the person at risk undergoes a very thorough examination. If both parents are unaffected, it is called a spontaneous genetic mutation or de novo mutation and chances of having another child with CCD are small. Of all the cases of CCD, approximately one-third are spontaneous and two-thirds are genetic.2

The genetic mutation for CCD is found on chromosome six and is called CBFA1 (short for core biding factor a1 or RUNX2) and is the only gene known to be associated with CCD.1 The normal version of CBFA1 acts to induce osteoblasts which are the type of cells that lay down bone. Because research has shown that CCD affects not only the clavicles and the skull but rather a more generalized attack on the entire skeleton, the changes suggest that the CBFA1 gene is not only active during early development but is also important during fetal and postnatal growth.1,4

The classic triad of clinical features noted in CCD individuals is hypoplastic clavicles, open fontanelles, and supernumerary teeth. Consequently few other conditions become suspicious as a differential diagnosis.1 However, the clinical picture is often variable even within the same family thus a thorough assessment is necessary. Diagnosis of CCD is based on clinical and radiographic findings that include imaging of the cranium, thorax, pelvis, and hands. A skeletal radiographic survey should include an anteroposterior (AP) and lateral projections of the skull and thorax; AP of the pelvis; lateral of the lumbar spine; and AP of the long bones, hands, and feet.2

Because of the strong dominant inheritance pattern that CCD presents with, a three generation family history should be completed by the health care provider and a referral be made for the family members to be seen in a genetics department. Those individuals with unusual features accompanied with developmental delays may have chromosomes ordered (a karyotype) to look for visible deletions or rearrangements involving the RUNX2 locus at 6p21.1,2 Molecular genetic testing may be offered for the diagnostic confirmation of CCD if the clinical findings do not meet clinical and radiologic diagnostic criteria. Prenatal diagnosis may be offered for pregnancies at increased risk if the mutation has already been identified in an affected family member.

Molecular genetic testing of the RUNX2 (CBFA1) gene detects mutations in 60-70% of individuals with a clinical diagnosis of CCD. Because the detection rate is not as yet 100%, this means that even if a test may come back as a normal report or as ‘no mutation detected’, this does not rule out the presence of CCD in the individual. This clarification is important to discuss with the individual at the time of testing. Presently such genetic testing is available on a clinical basis within the United States. Residents within Ontario can proceed with this clinical testing if the geneticist warrants it necessary and an Ontario Health Insurance Plan (OHIP) prior approval has been granted to cover costs incurred for out of province diagnostic testing. No costs would then be incurred by the individual.

Once a diagnosis of CCD has been made, and a thorough evaluation carried out, referral of the individual to a craniofacial team with dental professionals familiar with CCD is imperative in laying out a comprehensive treatment plan. The craniofacial team will plan for the multiple dental interventions required to improve the appearance and provide a functioning, stable dental occlusion. A comprehensive dental and radiographic assessment should address the retention of the deciduous dentition, congenitally missing teeth, presence of supernumerary teeth, and delayed or non eruption of permanent teeth. In addition any skeletal discrepancies of the jaws in all three planes of space should be noted.1,7

A staged process of treatment is followed over a number of years and may include removal of supernumerary teeth, exposure of impacted or unerupted teeth for forced orthodontic eruption, orthodontic alignment of the occlusion, prosthetic replacement of missing teeth, esthetic dentistry for misshaped teeth and often orthognathic surgery for skeletal discrepancies of the jaws when skeletal growth has been completed.3,8-10

Other aspects of management for CCD individuals may include speech therapy and aggressive interventions of sinus and ear infections that may include the insertion of tympanostomy tubes for recurrent middle ear infections. If the cranial vault defect is significant, the head needs protection from blunt trauma; helmets may be used for high-risk activities. If bone density is below no
rmal, treatment with calcium and vitamin D supplementation is considered.1,7 Preventive treatment for osteoporosis is often initiated at a young age.

CCD is a generalized skeletal dysplasia that leads to multiple abnormalities with one of the major concerns of the individuals is most often their dental disorders.12 Although a rare disorder, CCD is a condition that requires early recognition, as well as continual intervention to obtain the most favourable results for the individual. In CCD, an interdisciplinary treatment approach involving orthodontics, maxillofacial surgery, prosthodontics, and genetics is beneficial and necessary.11 Genetics plays an integral and recurrent part in the care of the entire family who has a member affected by the disorder because of the cascade effect that this diagnosis may have for other family members. The optimal goals for management and care in the individual with CCD are to ensure a family understanding of their disorder, make certain of individual satisfaction with their overall appearance, and provide a functioning dentition.

Dr. Peltoniemi has a private orthodontic practice in Thunder Bay, ON. 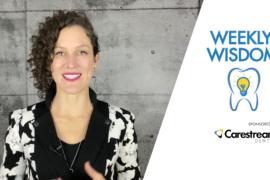