Clinical examination and radiographic imaging are the key steps in diagnosis and treatment planning in endodontics. Up until recently, intraoral, panoramic, and occlusal radiographs were the only imaging modalities available to dentists to rely on. These radiographs are two-dimensional (2D) images of three-dimensional (3D) structures with their inherent limitations such as image distortion and superimposition.

Computed Tomography is a method of taking multiple 2D images by rotating the X-ray source and image detector around the subject. A special software is then utilized to generate a 3D image of the acquired 2D images. Computed tomography was a breakthrough in medical imaging and a more recent version of that, Cone Beam Computed Tomography (CBCT), has revolutionized the diagnosis and treatment planning in almost all fields of dentistry.

The size of the tissue volume to be imaged is called Field of View (FOV) 1, and CBCT units are capable of capturing volumes ranging from the whole skull to just a small volume incorporating a few teeth. As larger volumes are imaged, or resolution is increased, X-ray dose will increase. Usually small FOVs are used for endodontic purposes to provide adequate diagnostic information with least patient exposure. 2

The number of days of background radiation is often used as a measure of radiation risk from radiographic examination. As an example, average effective dose for a single periapical radiograph is 1.9 µSv, for a panoramic it is 14.2 µSv 4 and for small FOV CBCT image (Kodak 9000 3D), it is between 5.3 to 38.3 µSv, depending on the part of the mouth studied. 5 These amounts are equivalent to 0.4 days of background radiation for periapical, 2.9 days for panoramic and 1 to 7.8 days for small FOV CBCT.

A CBCT image can provide the clinician with valuable information and should be used whenever patient’s benefits outweigh the potential risk of radiation exposure. The American Association of Endodontists and American Academy of Oral and Maxillofacial Radiology published a position statement on use of CBCT in endodontics. 6 These guidelines recommend utilization of CBCT in different aspects of endodontics including diagnosis, initial treatment, nonsurgical retreatment, surgical retreatment, implant placement, traumatic injuries, and resorptive defects.

In a series of case reports, we are going to present some cases regarding different applications that illustrate the use of CBCT technology in endodontics.

Case Report #1
A 64-year-old male was referred to our practice with discomfort when chewing on the top right side. Tooth #1.6 with a previous composite filling was sensitive to percussion, with no response to pulp sensibility tests. On the periapical radiograph, a radiolucency was apparent at the apices of this tooth (Fig. 1). Diagnosis of pulp necrosis with symptomatic apical periodontitis was made and treatment options were discussed. The patient chose to proceed with the conventional root canal treatment option. Treatment under the dental operating microscope was started and three canals were located. 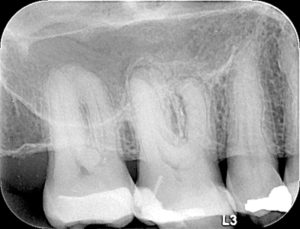 The area palatal and mesial to the mesiobuccal canal (MB1) was carefully troughed but the orifice of MB2 was not found. Removal of dentin in that area is necessary (to a depth of 0.5 to 3 mm) 8, but increases the risk of perforation. According to Stropko 7, a second mesiobuccal canal (MB2) can be found in up to 93% of maxillary first molars.

As the attempt to find MB2 was not successful, treatment of the other located canals was completed (Fig. 2), the situation was discussed with the patient, and he was sent for CBCT in order to determine the presence and location of the suspected second canal in the MB root. Scan results revealed that the existing obturation in the MB root of the tooth was laterally positioned and an unfilled MB2 canal was present (Figs. 3 & 4). 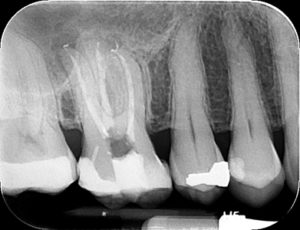 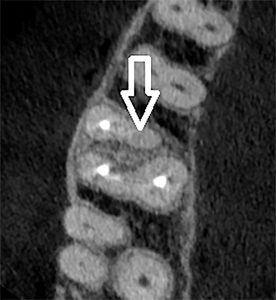 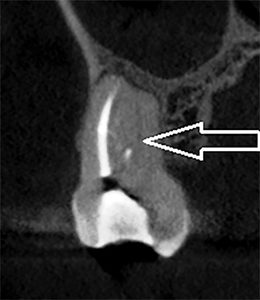 Measurements on the CBCT showed that the canal was 2.8 mm apical to current pulpal floor (Fig. 5), and 3.3 mm palatal to MB1 canal (Fig. 6). The patient was brought back and the tooth was then re-accessed and the pulpal floor was deeply troughed until the canal was uncovered and treated. Root canal therapy was completed and the patient was referred for the final restoration (Fig. 7).

Fig. 5
Coronal  view of CBCT image of tooth 1.6, showing the depth to be troughed to find MB2. 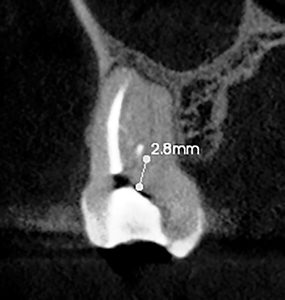 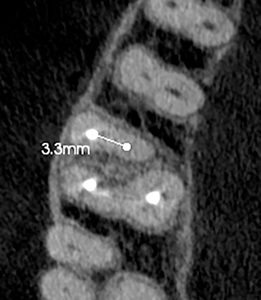 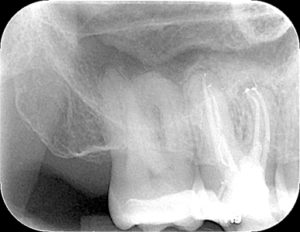 Case Report #2
Patient was a 68 years-old male referred to our practice because of a sinus tract on the buccal gingiva of tooth #2.6 (Fig. 8). The tooth was otherwise asymptomatic. The periapical radiograph revealed a previous root canal therapy with a metallic post in palatal canal and radiolucency at mesiobuccal root apex (Fig. 9). A diagnosis of previously treated with chronic apical abscess was confirmed. Patient was informed that to better investigate the tooth and the surrounding structures, we would require a CBCT.

Fig. 8
Pre-operative image of sinus tract at buccal gingiva of 2.6.

Fig. 9
Pre-operative radiograph of 2.6, showing the radiolucency at apex of MB root. 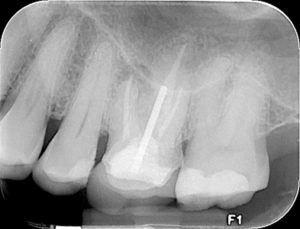 CBCT report showed that the mesiobuccal root of tooth #2.6 exhibited periapical rarefying osteitis, and the existing endodontic obturation in that root was eccentrically positioned, which is suggestive of the presence of an unfilled MB2 (Figs. 10 & 11). The other roots of tooth #2.6 did not show any pathology on the CBCT. 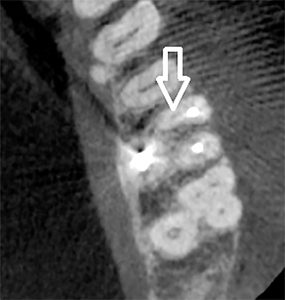 The options of nonsurgical orthograde retreatment of mesiobuccal root with possible need for apical surgery in future or extraction and replacement with implant were presented, and the patient chose to proceed with the option of retreatment. Retreatment of tooth 2.6 was started under the microscope, and the floor of pulp chamber palatal to first mesiobuccal canal was troughed and the orifice of untreated MB2 was found (Fig. 12), and root canal therapy for MB2 and retreatment of MB1 were completed (Fig. 13). 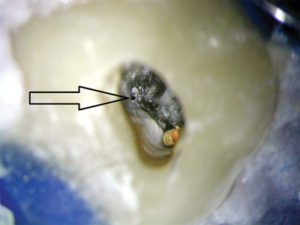 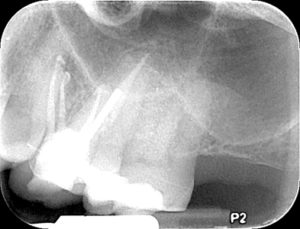 In this article we have described two cases where the use of CBCT technology was indispensable to properly diagnose and treat them. The presence and location of the MB2 canal was confirmed with the CBCT so it could be located and successfully treated on both cases. Dentists should be aware that a high percentage of first (up to 93%) and second (up to 60%) maxillary molars have an MB2 canal. The use of current technologies such as the dental operating microscope and CBCT imaging should be considered when treating these teeth. In conclusion, if a generalist is going to provide a patient with a procedure that can be done by a specialist then that practitioner is required to hold himself/herself to the same standards of practice as the specialist. And that is inclusive of CBCT imaging. OH

Dr. Yosef Nahmias was born and raised in Mexico City. After he had graduated from the Universidad Tecnologica de Mexico, School of Dentistry, in 1980 with a degree in dentistry, he decided to advance his education and chose Endodontics as his specialty. Dr. Nahmias has been a practicing Endodontist in Oakville, Ontario since 1983.

RELATED ARTICLE: A Rapid Review on Radiation and CBCT in Dental Practice