Trauma to the mandibular condyle or infection in the temporomandibular joint (e.g. septicaemia or chronic mastoiditis) in a paediatric patient can have a marked impact on facial development, particularly in the small percentage of patients that develop ankylosis. Ankylosis implies the loss of joint function due trans-articular fusion with bone (Fig. 1). Whilst it is unclear why some patients develop ankylosis, its effects are self-evident and range from inadequate nutrition, facial dysmorphia, to inability to obtain dental care, with all the resultant sequelae.

Fig. 1
Three dimensional reformatted CT scan of bilateral TMJ ankylosis. The joint space is lost and has been enveloped by a florid bone bridge. 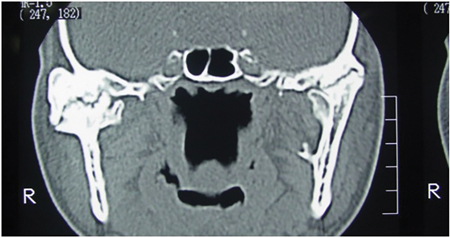 Treatment of ankylosis is thus a sine qua non, and treatment must be accomplished in a manner that allows for future facial growth. Various treatment protocols have been deployed. Excision of the ankylotic bone mass and the creation of a large gap of at least 1.5 cm is called a “gap arthroplasty”. The placement of an interpositional graft, such as temporalis muscle, silastic, or cartilage in the gap, is recommended by some surgeons and the procedure is called an “interpositional arthroplasty”. 1 Furthermore, the temporomandibular joint can be reconstructed by means of grafts, such as sterno-clavicular 2, cranial 3 or ilium 4. The costo-chondral graft has however become a work-horse reconstructive option for the paediatric patient. 5-8 This is due to its purported ability to provide for growth, matched to the remaining facial skeleton (Case 1) (Figs. 2-5). It is relatively easy to harvest; the graft usually fits the native TMJ dimensions and can easily be adapted to fit the glenoid fossa. Although the growth potential of the graft is considered an advantage in growing children, its long-term growth is unpredictable.

Fig. 2
(A) Frontal view of a patient suffering from left temporomandibular joint ankylosis. The dots indicate the severe facial asymmetry towards the left.
(B) The profile view demonstrating the severe mandibular anteroposterior deficiency and convex profile. 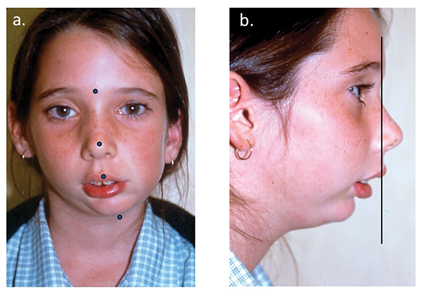 Fig. 3
(A) The amount of bone to be excised at the TM joint (I) and the level of the coronoidectomy (II) is indicated by the arrows, (B) The costochondral graft with 5mm of cartilage at the proximal end, (C) the resected coronoid process. 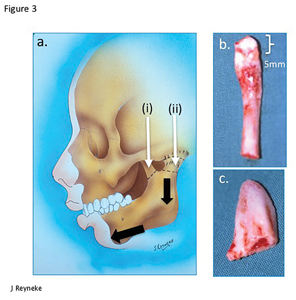 Fig. 4
Case 1. The normal facial growth is evident in the postoperative (a) frontal view and (B) profile view. 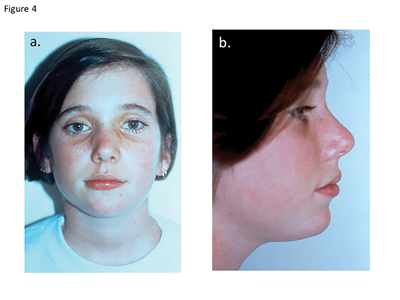 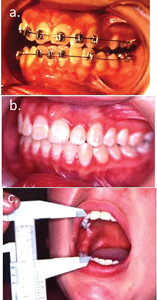 The treatment principles for paediatric joint ankylosis were elucidated by Kaban et al and remain a reference point. 9 The ankylosed joint is exposed via a pre-auricular incision extended into the temporal area, and a retromandibular incision to expose the ramus. The ankylotic mass is incrementally and carefully removed with the associated coronoid process. To ensure maximum mandibular mobilization, the muscular and ligamentous attachments to the mandibular ramus are stripped.

The 4th and 6th ribs are harvested from a single incision. Care during the harvesting will reduce the complication of pneumothorax to a minimum. About 5 cm of bone with a 5 mm cartilage cap is harvested (Fig. 3B). It has been proposed that smaller cartilage caps reduce the risk of unwanted graft over-growth.

Once the occlusion has been established, the grafts are secured to the ramus with transosseous screws and stabilized with plates. Interpositional soft tissue grafts in the form of temporalis facia 10, dermis or fat 11 may be used to separate the graft from the skull base. The rationale is that it reduces the risk of re-ankylosis.

Postoperative care is a mandatory, but an onerous task. Vigorous, on-going physiotherapy is required to ensure that good mandibular function is obtained and maintained 9. Post-operative inter-maxillary fixation of two to four weeks is required.

Case 1
A 12-year-old female patient was referred to the Oral and Maxillofacial Surgeon by her orthodontist for evaluation of her reduced mouth opening. The orthodontist commenced treating the patient for the orthodontic correction of her malocclusion, however, found it difficult to place orthodontic attachments due to the patient’s limited mouth opening (Fig. 5A). The patient’s parents recalled that she fell on her chin as a three-year-old. However, it was an unremarkable event. On examination, the patient had severe mandibular asymmetry towards the left combined with mandibular antero-posterior deficiency (Figs. 2A & B). She had a Class I occlusion on the right and Class II on the left with a maximum mouth opening of 3 mm (Fig. 5A). Radiographic examination revealed a large bony mass in the left temporomandibular joint region. An arthroplasty was performed and a large mass of ankylotic bone, as well as an elongated coronoid proses, was surgically removed (Fig. 3C). A right costo-chondral graft was harvested ensuring a 5 mm cartilaginous cap (Fig. 3B).

The graft was shaped and secured into the modified glenoid fossa and attached to the ramus using trans-osseous screws and bone plates acting as washers. The bony and occlusal defect was overcorrected by mandibular advancement and ramus height increase. This corrected the dental midlines and created an open bite on the left. The surgical treatment was followed by aggressive physiotherapy and a mouth opening of 39 mm was achieved (Fig. 5C). Orthodontic correction of her malocclusion was completed one-year post-operatively. The post-operative growth of the graft kept pace with facial growth and an acceptable aesthetic and functional result was achieved (Figs. 4A-B & Figs. 5B-C).

Unfortunately, the risk for re-ankylosis of a costo-chondral graft (Fig. 6) and the unpredictability of overgrowth (Fig. 7) or resorption (Fig. 8) of the graft remains a far too common complication and the option of prosthetic rehabilitation in paediatric patients is to be seriously considered. 4,12

Fig. 6
The severe bony re-ankylosis of this patient following costo-chondral graft three years previously is indicated by the black arrows. The bone plates used to secure the grafts are also partially covered by the bone (white arrows).

Fig. 7
(A) The 15 year old patient received a costo-chondral graft three years previously for the correction of temporomandibular ankyloses. The graft re-ankylosed and has overgrown causing facial asymmetry and a malocclusion, (B) the enlarged bone graft (arrows and circle), (C) bilateral cross bites, midline deviation as well as maximum mouth opening. 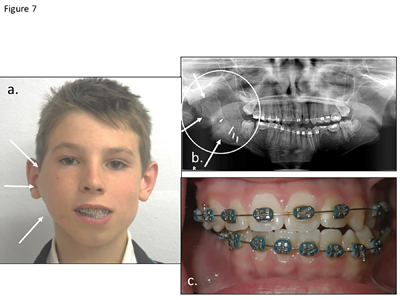 Fig. 8
(A) The agenesis of the right mandibular condyle and ramus of a patient suffering from hemifacial macrosomia Kaban type III (white arrow), (B) The severe resorption of the costo-chondral graft after four years is demonstrated (circle). 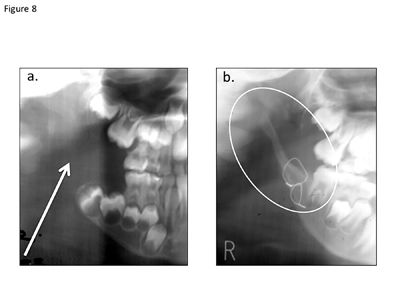 Many surgeons in the past have found the need for alloplastic TMJ reconstruction, particularly in difficult cases. 4,14-17 Since the first report by Carnochan of attempted condylar reconstruction using wood, many surgeons have reported their experiences with prostheses made of various materials such as ivory, gold, stainless steel, Vitek, ceramics, and titanium. None enjoyed good long-term results 4, although many of the problems were related to the overzealous use of alloplastic TMJ prostheses.

Case 2
A 14-year-old male patient was referred from a rural hospital to the Department of Oral and Maxillofacial Surgery at the Chris Hani Baragwanath hospital in Johannesburg for treatment of left temporomandibular joint ankyloses. He was involved in a motor vehicle accident at the age of seven years and sustained a left mandibular condyle fracture. The injury was treated by means of four weeks of IMF. Since removal of the IMF his mouth opening decreased over a period of seven years and his maximum opening was 4 mm at the time of referral. A CT Scan revealed a large bony mass in the left temporomandibular joint area (Fig. 10B). The ankylotic bone mass was surgically removed (Fig. 10C) and the temporomandibular joint reconstructed by means of an alloplastic stock joint prosthesis (Biomet Microfixation total stock device (Jacksonville, FL) (Fig. 10A). A fat graft harvested from the umbilicus was grafted around the prosthetic condyle. The patient underwent intensive postoperative physiotherapy and had a mouth opening of 39 mm, one-year after surgery. 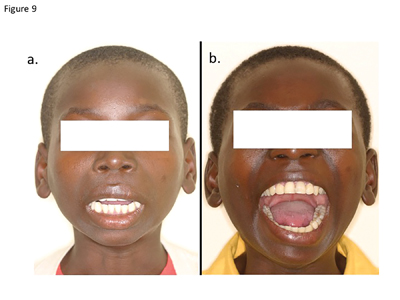 Fig. 10
(A) an intra-operative view of the reconstructed temporomandibular joint with an alloplastic prosthesis, (B) a CT Scan of the TM joints demonstrating the large bony ankyloses of the joint, (C) the bony mass remove from the TM joint region. The arrow shows the displaced head of the condyle indicating unsuccessful reduction following the initial trauma. 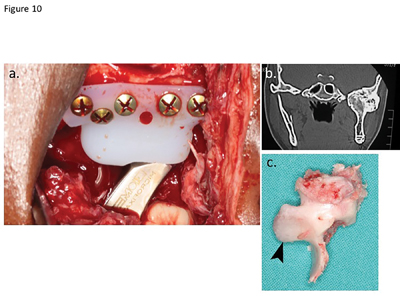 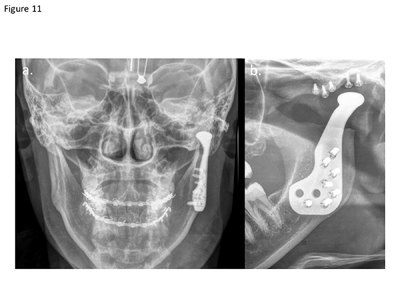 TMJ reconstruction is an end stage correction of a joint that is no longer functioning and can also be considered as TMJ construction in cases where there is no joint present. The timing of therapy is paramount because in long standing ankylosis cases the muscles of mastication, the bone and the dentition have adapted to the immobilised joint. The loss of function of the lateral pterygoid muscle in most TMJ reconstruction cases (costo-chondral or alloplastic) will lead to impaired translation of the mandible. Lack of translation would certainly also decrease mouth opening. A realistic opening capacity of around 39 mm should be expected. The need for vigorous and long term physiotherapy can’t be over emphasised. Many authors have demonstrated a correlation between the high number of previous surgeries in the TMJ and a poorer outcome of a final reconstruction. 18

Recent developments in tissue engineering have shown that facial bone structures can be designed by computer assistance and produced inside the patient’s own body. Stem cells present in human muscle or derived from bone marrow or fat can be engineered to become spare parts identical to those they replace. It may not be farfetched to expect in future to be able to replace a temporomandibular joint with a tissue engineered joint. 19 OH

Johan served as professor in the department of Maxillofacial and Oral Surgery at the university of the Witwatersrand in Johannesburg since 1991 and was appointed as an extraordinary professor at the university of the Western Cape, South Africa, in 2014. Internationally, he also holds professorships at the universities of Oklahoma and Florida in the USA as well as at the university of Nacional Autònoma de Mexico, San Salvador, Mexico. He was awarded the Fellowship in Maxillofacial and Oral Surgery in 2003 by peer review in the College of Medicine of South Africa and obtained his PhD at the University of Tampere, Finland in March 2006. Johan has a passion for Orthognathic and Reconstructive facial surgery and has presented numerous courses and lectures on the subject. He has published more than 93 papers in refereed journals and has also written chapters in numerous well-known textbooks on Oral and Maxillofacial surgery. He has published several text books on orthognathic surgery and the Second Edition of his book “Essentials of Orthognathic Surgery” was published in October 2010. In 2013, Johan was honour to be invited to present the Presidential lecture at the 21st International Conference of Oral and Maxillofacial Surgeons in Barcelona. 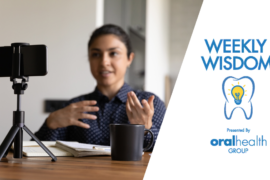