Dentists are the most important component of screening and treatment for these disorders.

Literature and overlapping research have turned the lights on for us. We now know that the worst primary headaches such as cluster headache (sufferers primarily male) and chronic paroxymal hemicrania (one sided headaches that occur in bunches, sufferers primarily females) are the result of REM related sleep disturbances. Chapter 17: Sleep Disorders and Headache; “Head, Face and Neck Pain” (Science, Evaluation and Management) An Interdisciplinary Approach: Mehta, N.R., Maloney, G.E., Bana, D.S., Scirvani, S.J., Wiley-Blackwell, 2009. That is why 75 percent of the time these horrible headaches can be relieved by giving the patient oxygen (7-10 liters of oxygen for five mins.) as opposed to the medications these patients are prescribed to prevent or treat (calcium channel blockers, tricyclic anti-depressants, selective serotonin re-uptake inhibitors, etc.). Dr. Noshir Mehta is the Director of the Craniofacial Pain and Sleep Clinic at Tufts University.

The American Academy of Craniofacial Pain’s “A Handbook for Assessment, Diagnosis and Management”, Edited by H. Clifton Simmons III, DDS, devotes a chapter to this relationship (Chapter 10: Dental Sleep Medicine).

The problem is a lack of training in the screening for these disorders by physicians and dentists. Patients must wait until the symptoms of the co-morbid problems of hypertension, cardiovascular disease, stroke or oral manifestations of bruxism with facial pain, headaches and TMD develop. Even those patients who have been diagnosed with apnea rarely have an examination of the nasal and oropharyngeal structures. They are simply prescribed a CPAP.

It is clear that dentists must assume the primary role for screening for these disorders as we have the greatest access to evaluate with our new patient and recall examinations.

Nightguards, once thought to be innocuous, are now known to increase pathology. A study published in the International Journal of Prosthodontics 2004, Gagnon et al, explained how 40 percent of the time a nightguard will make a person with apnea 50 percent worse. That is they will make a person who stops breathing 20 times an hour stop breathing 30 times and hour.

It is clear that in the future, dentistry will have an increasingly greater role in the treatment of these disorders. It is also clear that medicine will look to dentistry to set the standard for examination and develop models that depend on dentistry to deliver optimum care.OH

Oral Health welcomes this original article. Part I of this series on the Future of Dentistry by Dr. Olmos appeared in the March, 2011 issue of Oral Health. These articles can also be found at www.oralhealthjournal.com.

Coming Up in Oral Health

Watch for this very special, keepsake issue of Oral Health as we celebrate the past, present and future of Canadian dentistry. Enjoy this once-in-a-lifetime, milestone edition! 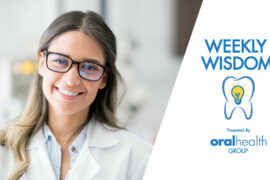