The purpose of crown lengthening is the creation of ideal conditions for crown preparations while respecting the biological width concept.1 If not respected the desirable effect is neither healthy nor cosmetically pleasing (Fig.1). Periodontal surgery in general requires removal of healthy supporting alveolar bone resulting in soft tissue “gaps” between teeth (Fig 2). Although the resultant soft tissue component is a major determinant of the cosmetic appearance of the treatment outcome its dimensions and contours depend on the thickness of the tissue and the position of its supporting underlining bone. Since gingival recession/bone loss occurs after elevation of a full gingival flap, often, the resultant soft tissue is deficient resulting in unfavourable appearance. Unlike at non-cosmetic sites, such outcome is very undesirable when the surgery involves readily visible are of the mouth. The author has used a modification technique described in this article for many years with excellent results.

Preparation of the Case

Medical and dental histories are taken as before any dento-alveolar surgery and lead to appropriate protocols for surgical management. Since the impact of these histories are no different from any periodontal surgeries I will not detailed them in this paper. Yet, its omission in this paper would give a false impression of their importance.

Clinical examination includes periodontal charting, careful assessment of the mobility of the teeth, review of the radiographs to establish crown-root ratios, assign a biotype2 and taking of intra-oral pictures. It is important that the operator has a clear understanding of the position of the CEJ relative to the crestal bone, pocket depth and gingival margin. It is this understanding of the four parameters that leads to proper management and is at the hart of this procedure (Fig.3).

Being a cosmetic procedure it is of paramount importance that careful preparation is completed before surgery.

1. Identification of the individual cosmetic complaints by the patient. This is best done by the patient while looking at his/her intra-oral pictures. What is cosmetically objectionable to the patient may not be considered so by the operator. This process should result in a list of cosmetic concerns as perceived by the patient.

2. Assign to what extent each item on the list could be rectified by the surgery, improved but not eliminated or not addressed at all. This is integral part of the treatment planning process done by the operator. Not all cosmetic concerns can be addressed because of technical and biological limitations. It is best to address each of the items on the list individually so that false expectations could be avoided. This process is part of the case presentation and is best done by illustrating it on a good quality monitor.

3. Discussion with the patient outlining what can be achieved, to what extent and at what level of predictability. This is best done in front of the monitor preferably with the help of electronic simulations. It is desirable that the final simulation is given to the patient, either by print or later sent via Email, so that time is allowed for full understanding of the treatment plan, its objectives, its limitations and the level of predictability of the planned outcome.

This method of preparation will strengthen the process of informed consent while it is not legally binding the operator because it is a plan only, one that is ultimately modulated by individual variations in healing and post-surgical management. An example of this process is depicted in Figures 4 and 5. Surgical templates, marked diagnostic models and diagnostic wax-ups can guide the surgeon during the procedure (Figures 6 and 7).

After administration the local anesthesia (buccal infiltration and naso-palatal injection) a very conservative flap is raised allowing palpation and visualization of the alveolar crest Figures 8,9 and10). In this case (Fig.11) the elevator is used as a retractor visualizing the position of the crestal bone. If interprdental lengthening is necessary the papilla is also raised and pushed lingually, just enough that the operator can palpate and later access the interdental crest.

The elevator is used to retract the mini-flap and allow access to the bone with a round bur (Fig. 14) While protecting the soft tissue from trauma from the high speed bur. The same can be accomplished with an end-cutting bur with a higher degree of protection of the root surface and the soft tissue.

Before the osteoplasty is initiated measurements are made from the CEJ to the crestal bone and the gingival margin (Fig15) allowing the surgeon to make the final decision as to how much bone to remove. The osteoplasty will then commence with the aim to create the desired “domains”, as dictated by the biological width concept, necessary for the proper healing. The novelty of the procedure described in this paper is in flap management rather than in how these parameters are managed in classical crown-lengthening procedures. By not fully raising the flap, as in the conventional crown lengthening procedure bone loss attributed to large flap exposures is prevented. If brief the distance from the planned crown margin to the crestal bone is about 3-4 mm respecting the biological width concept and allowing for the ferrule to be established in case full crown preparations were planned.

After completion of the osteoplasty and copious irrigation with sterile saline the surgical wound is close wither by a tissue adhesive (Fig.16), sutures (Fig.17) or combination of both (Fig.18). Post-surgical care is similar to the classic crown lengthening procedures.

A different clinical situation is presented in Figures 19 to 23. The patient presented with a shear fracture of the labial surface of tooth 2.1. Inspecting the broken-off specimen helps planning the procedure that is similar in concept with the modified procedure (Fig. 20) presented in this paper but includes a substantial discard of the marginal gingival as well.

A long-term follow-up of a combined orthodontic-restorative case is illustrated in Figures 26-to-29.

This paper presented a modification of the classic crown-lengthening procedure incorporating meticulous pre-surgical preparation, surgical manipulation of the bone with minimally invasive access resulting in improved cosmetic outcome. The novelty of the procedure described in this paper rests in minimal flap elevation and reduction of the alveolar bone without exposure of the crest to more than 1-2 millimeter. OH

Dr. Birek is an Associate Professor in the Department of Periodontics at the University of Toronto. He maintains a private practice in Periodontics and Implant Surgery in Toronto. Peter is the Periodontology editor for Oral Health Jou
rnal. 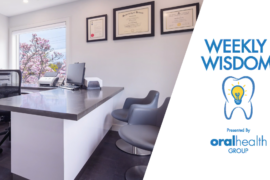