ABSTRACT: Young athletes with ever-changing transitional dentitions and those wearing fixed orthodontic appliances can benefit from custom-formed protective mouthguards. Modifications of the traditional vacuum-forming method are useful to fabricate mouthguards for such patients and extend the useful life of these devices. The purpose of this case report is to document fabrication of custom-formed protective mouthguards for a 10-year-old boy wearing fixed orthodontic appliances and a nine-year-old girl with a fixed palatal expander in place.

Traumatic impact to teeth and their supporting structures is common during athletic activities. Custom-fabricated protective mouthguards for people participating in sports and certain recreational activities can minimize or eliminate mouth injuries. Such mouthguards are vacuum-formed on a plaster or stone model of the maxillary dental arch and fit better than the store-bought type of mouth protectors.

Young athletes in the transitional dentition years and patients wearing fixed orthodontic appliances are as much at risk of dental trauma as any athlete. Bonded or cemented orthodontic appliances pose problems when vacuum-formed mouthguards are fabricated. Because teeth shift during the course of orthodontic therapy and permanent teeth continually erupt into position, a custom-formed mouthguard may not fit soon after the initial impression is recorded.

This case report describes a method of fabricating custom-fitted protective mouthguards for patients wearing fixed orthodontic appliances and those in the transitional dentition. The methods include modifications of a previously published technique.

A 10-year-old boy had commenced his orthodontic therapy with bonded and cemented appliances. A custom-fitted, vacuum-formed protective sports mouthguard was fabricated in the following manner:

First, a thin “rope” of utility wax was compressed around the bonded brackets of the maxillary incisors (Fig. 1). The wax was just thick enough to cover the brackets. Presence of the wax minimized alginate material tearing when the impression tray was removed.

Next, a dental stone model was poured and trimmed in a horseshoe configuration, with a thin base (Fig. 2). Mortite Weatherstrip and Caulking Cord (Mortite Inc., Kankakee, IL), which is available in hardware stores, was used to cover areas of protruding orthodontic brackets and wires and to fill in regions of prospective tooth development and orthodontic movement (Fig. 3). Dental plaster, stone, or other putty-like materials can also be used for blocking out space, but any such material must be resistant to the heat during vacuum forming.

After the cast and Mortite “filler” material was sprayed with a silicon separating solution, the ethyl-vinyl-acetate (EVA) sheet was heated and vacuum formed in the usual manner. Proform Extra Pro Laminates EVA triple-layered mouthguard material (Dental Resources, Delano, MN) is 5mm thick before vacuum forming. Once vacuum formed, the mouthguard’s thickness thins to 3 to 4mm. The extra thickness offers more protection against impact, without opening the bite significantly. Proform brand mouthguard sheets have an embedded bite tab to coincide with the mandibular incisors’ position during mouth closure.

If desired, the EVA sheet can be rotated 180 degrees during vacuum forming, allowing the region to be eliminated during the finishing procedures. The 5mm EVA mouthguard sheets come in various colors, including a patriotic red/white/blue version. Dental Resources and other manufacturers offer mouthguard materials less than 5mm thick. When these are used, care must be taken during the heat/vacuum-forming process so as not to thin the material excessively.

The mouthguard was cut to form using scissors. A large stone on the dental lathe was used for shaping and smoothing margins. Final smoothing of the entire periphery was completed with a hand-held torch. The flame was applied intermittently to prevent burning the edges (Fig. 4). To avoid distortion, the mouthguard should be flame treated only while seated on the dental cast.

A nine-year-old girl who had completed palatal expansion and was expected to wear the fixed expander for another six months is shown with her appliance and mouthguard in place (Figs. 8a & 8b). Mortite was applied to the cast to accommodate space for erupting permanent lateral incisors, and the mouthguards were trimmed carefully in the regions of the palatal expanding device and the permanent first molars’ large buccal tubes (Fig. 8c). Because the dental cast was not damaged during mouthguard fabrication, a spare was made for the child for no additional fee.

In the prior report of this method, utility wax was not used across the bonded brackets. Instead, Mortite was placed on the cast in those regions. The wax makes for a neater impression, and the alginate material does not tear when the impression tray is removed. Also, experience has shown that a cast with a thinner base makes for less stretching and thinning out of the heated material during vacuum forming.

Triple-layered ethyl vinyl acetate material (5mm) makes for a sturdier and more protective mouthguard. One must consider, however, that if the bite is opened too much, there could be discomfort in the temporomandibular joints. The mouthguard’s posterior biting surface can be trimmed flat with an arbor band on the dental lathe to at least partially close the bite, according to the patient’s comfort.

Some mouthguard material manufacturers offer anterior straps that can be heat attached during the fabrication process. Certain sports leagues, especially hockey and football, mandate that the mouthguard be attached to the helmet’s face protection segment. Directions for attachment of such straps are usually included with the material.

The authors have no financial interest in any product or company mentioned in this report.

Consent to use facial photographs was granted to Drs. Croll and Castaldi, and the American Academy of Pediatric Dentistry. 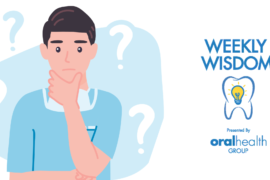