Dental Abnormalities in a Child with Neuroblastoma

Introduction
Neuroblastomas are tumors deriving from the peripheral nervous system, and arise from neural crest embryonic cells.1,2 According to a French study conducted in 2004, 45% of paediatric tumors are diagnosed before the age of five. Within that group, 71.8% are diagnosed with embryonic tumors, including neuroblastomas.1 Both dental and medical professionals recognize the acute and long-term oral impacts of radiation therapy and chemotherapy on young aged patients. Those include disorders in cranio-facial development, salivation, temporo-mandibular joints and dental development.3 Dental development begins at four months in-utero and ends with second molar root completion at 16 years of age.4 Radiation therapy and chemotherapy during odontogenesis can have permanent consequences on teeth. Dysplastic roots (including an aberrant crown-root ratio), enamel hypoplasia, microdontia and hypodontia are all known impacts of neoplastic therapies in the paediatric population.3,5 According to the National Institute of Health (Effinger, 2014), the prevalence of hypodontia following paediatric cancer treatment varies between 8 and 50%, depending on the age of the diagnosis and the treatment received.3 Furthermore, according to a study published in Pediatric Blood Cancer (Cubuku, 2012), 13.5% of patients who have received chemotherapy, with or without radiation therapy, present with microdontia. The same study demonstrated that 86.4% of those patients have abnormal crown-root ratios.5,6

Case Report
In October of 2007, a 3-year-old male presented to the emergency room at the Hospital for Sick Children in Toronto. The patient was previously healthy, with no known allergies. He was diagnosed with stage IV neuroblastoma located in the left adrenal gland. Following a full oncological work-up, metastasis to the bone marrow, bones and lymph nodes were identified. Chemotherapy high risk protocol A3973 was initiated shortly after the diagnosis. The patient received the following chemotherapy medications; Doxorubicin 300 mg/mg, Vincristine 8 mg/m2, Cyclophosphamide 16.9 g/m2, Etoposide 2552 mg/m2, Carboplatin 1700 mg/m2, Melphalan 110 mg/m2, Cisplatin 400mg/m2. Furthermore, the patient underwent a complete tumor resection in March 2008, followed by an autologous stem cell transplant, completed in April 2008. Subsequently, he underwent radiation therapy to his left abdomen in June 2008. The patient was placed on cisretinotic acid maintenance therapy, until December 2008.

In 2014, the Hospital for Sick Children Department of Dentistry received a referral from a community paediatric dentist, requesting restorative work. At that time, the referring dentist had already diagnosed the patient with dental agenesis and abnormal root-crown ratio. A radiographic examination performed on June 23, 2014 (Fig. 1) revealed a mixed dentition, with retained 55, 65, 75 and 85. Teeth 15, 25, 35 and 45 were noted as being missing on the radiographs. A generalized abnormal crown-root ratio, particularly severe in the molars was also observed. An oblong, radiopaque, homogeneous and well defined area is located at the furcation of primary molar 75. This area appears to be calcified and is surrounded by a radiolucent contour that has no effect on adjacent structures. That same radiopaque area is visible on the bitewing radiograph, but is easily missed due to its resemblance to the inter-radicular bone crest (Fig. 2).

In July 2015, the patient attended a follow-up at the Hospital for Sick Children Department of Dentistry where a thorough oral examination was completed and bitewing radiographs were taken (Fig. 3). Once again, the same oblong, radiopaque, homogeneous and well defined area was noted. A radiolucent zone of greater magnitude, continuous with the pulp of tooth 75 was identified surrounding the apical third of the calcified area. In September 2015, an evaluation performed by a dental radiologist mentions that the lesion is consistent with external resorption. No further review was done at this time.

One year later, in August 2016, another radiographic examination was performed during a regular follow-up visit (Fig. 4). The same calcified area is noted, and seems to have maintained the same shape. Furthermore, it appears to have migrated apically within the adjacent primary molar (7.5) and is now apical to the alveolar bone crest. The translucent zone is larger, and includes the primary molar pulp chamber, but is still well defined, and appears to be external resorption. 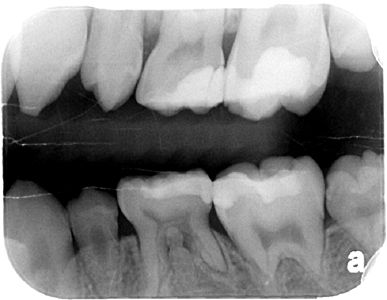 On a panoramic and bitewing radiographs taken in August, 2017 (Fig. 5) the generalized abnormal crown-root ratio can be appreciated. Enamel hypoplasia of the second permanent molars is also noted. All four primary second molars are still retained. On the bitewing (Fig. 6), the same calcified area is observed. A centered linear radiolucent zone is present. The calcified structure now appears to have a crown, a completely formed root and a pulp canal. Resorption is still present around the apical third and the crown, of the radiopaque structure. 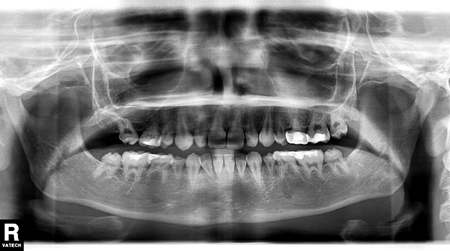 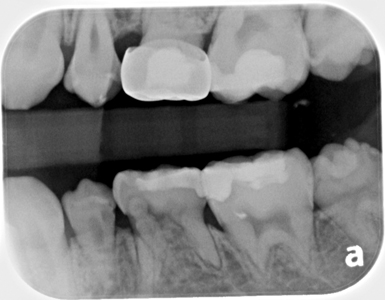 It is important to note that the patient never experienced any symptoms with tooth 75 and no anomalies were noted during palpation of the adjacent alveolar bone crest. Pulp testing results for teeth 75 and 85 were normal. Percussion, probing and palpation testing were also within normal limits. However, tooth 75 was more sensitive to cold testing and a diagnosis of reversible pulpitis was made (Figs. 7 & 8). Note that all carious lesions were restored. 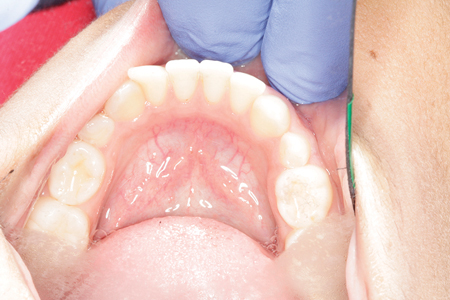 Discussion
Even though oncologic multimodal therapies are most responsible for dental development disorders, it was mentioned in an article published in Oral Oncology (Abadie, 2014) that there is a possible association between neuroblastoma and dental agenesis, due to an underlying genetic defect.6 According to Abadie et al (2014), 80% of patients with teeth agenesis presented with a MYCN gene amplification.6 MYCN is a proto-oncogene that is amplified in advanced-stage neuroblastomas, and manifests during neural crest formation. Through inhibition of negative regulators of Wnt signaling, which is an embryonic development pathway, MYCN stimulates cellular proliferation of the neuroblastoma. Furthermore, a mutation of gene PHOX2B, a transcription factor also involved in Wnt signaling, was sporadically identified in some cases of neuroblastoma. SMX1, a gene involved in embryonic development of the neural crest, is also known to be responsible for tooth agenesis.8 Indeed, when an homozygous deletion of MSX1 or PAX9 (also identified in some cases of teeth agenesis) is present, tooth development stops at bud stage.8,9 Interestingly, it was identified that when PHOX2B is activated, SMX1 activity is reduced.6,8 Ultimately, a disturbance in the Wnt signaling cascade is already recognized in linking cancer to dental abnormalities, as in the case of Gardner syndrome. With PHOX2B gene involvement in Wnt signaling and its role in neuroblastoma development, the potential relation between it and dental agenesis should be considered.6

With regards to the case study presented in this article, the calcified area identified on radiographs since 2014 is potentially tooth 35. If so, it is hypoplastic in nature and erupting within the primary molar. A differential diagnosis of a supernumerary microdens could be made, but is less likely. The complete root development of the potential tooth 35 can be appreciated with consecutive radiographs. In terms of treatment options, there are several possibilities to consider. For now, in the absence of signs and symptoms and infection or irreversible pulpitis, the tooth will simply be followed. Extraction of both teeth will be considered if an infection is diagnosed. Endodontic treatment most likely would not be feasible. We could question the eruption of the microdens. Will it erupt through the primary molar?

In addition, the fact that teeth 15, 25, 35 (potentially) and 45 are congenitally missing leads us to believe that their absence is related to either the Neuroblastoma or the associated treatments. The development of teeth is influenced by factors in the environment in which they are developing.

Conclusion
In conclusion, the association between radiation therapy and chemotherapy at a young age can have a severe and permanent impact on dentition. It is interesting to note that, not only are neoplastic therapies responsible for permanent damage, such as dental agenesis and microdontia, but that a possible genetic predisposition of neuroblastoma patients for dental agenesis may also be involved. OH

Dr. Stéphanie Labbé is a dental resident in the Department of Dentistry at the Hospital for Sick Children in Toronto, Ontario, Canada.