If you sit at your computer and Google “dumb stupid laws”, you will be surprised to find all sorts of websites listing hundreds of really dumb stupid laws, in both the United States and Canada. Some of my favorites are as follows:

• In Alabama, it is illegal for a driver to be blindfolded while operating a car;

• In Montana, it is against the law to be alone with a sheep in the cab of your truck;

• In Maine, it is illegal to have Christmas decorations up after January 14th;

• In Indiana, it is illegal for a barber to threaten to cut off a kid’s ear if he doesn’t sit still;

• In Florida, men may not be seen publicly in any kind of strapless gown;

• In Missouri, it is illegal to drive with an uncaged bear in your car;

• In Georgia, it is illegal to use profanity over a dead body which lies in a funeral home.

But the “grand prize” for the dumbest and stupidest law is awarded to Ontario, where, due to a recent Ontario Court of Appeal decision, a dentist or any other healthcare provider can now be charged with “sexual abuse” for having sex with his or her spouse if he or she is also their patient. The spouse’s consent to dental treatment or sex is totally irrelevant; it still amounts to “sexual abuse” as defined by the legislation and the mandatory penalty for a finding of “sexual abuse” by the Discipline Committee of the Royal College of Dental Surgeons of Ontario is revocation of the dentist’s license for a minimum of five years!

Earlier this year I had hoped that there might be an opportunity for an alliance of all Ontario healthcare professionals to petition the provincial government to amend or expunge this Draconian ‘sexual abuse’ legislation. Fortunately, members of the Coalition of Regulated Health Professional Associations (CORHPA) got together and drafted a letter to the Minister of Health. It pointed out that… “currently, health professionals have been found to have committed ‘sexual abuse’ and had their licenses revoked in circumstances that common sense suggests should not attract such a penalty, or even any penalty at all.” It then went on to request to the Minister… “that consideration be given to creating exemptions to the mandatory revocation provision for treating spouses.”

Now you might be thinking… “I have nothing to worry about. I have been sleeping with and treating my spouse for years and there has never been a problem. Furthermore, who would ever bother to notify the RCDSO that my spouse is also my patient?”

Well, let me give you a few examples of just who might write a letter and turn you in:

1. A disgruntled receptionist, dental assistant or dental hygienist in your practice who feels that you have treated her unfairly. All she has to do is write a letter to the College and enclose a photocopy of your spouse’s dental chart. You would now run the risk of receiving a mandatory license revocation. You would get to stay at home without pay and watch Oprah and eat Kraft dinner for the next five years.

2. The dentist down the street, who has always been a little envious of your success, learns that your spouse is also your patient. He or she then writes a letter of complaint to the College requesting a formal investigation into your “sexual abuse” of your spouse.

4. Even your own spouse can lodge a complaint against you! Let’s suppose the negotiations for your pending separation or divorce are not going as well for your spouse as she or he had hoped. Your spouse then tries a new tactic and says to you… “Sweetheart, this is how it’s going to be: either you agree to give me the house, the boat, the Mercedes and all your stocks and bonds, or else I am afraid that your College will learn about that beautiful bridge you made for me while you continued to sleep with me.”

4. With the threat of disclosure and potential license revocation hanging over you, your reply would most likely be… “Where do I sign?”

So, what choices do married Ontario dentists have if they don’t want to run the risk of being convicted of professional misconduct and losing their licenses for five years? I will list a few for you:

1. Relocate to another province where dentists don’t have to live in fear of losing their licenses for doing a simple composite on their spouse;

2. Continue to treat your spouse, but don’t have sex with your spouse. (Whenever I suggest this solution to a colleague, the tongue-in-cheek response is usually… “Well, that’s easy. That’s pretty well the way things have been at home for a long time!”)

3. Continue to sleep with your spouse but tell your spouse to find another dentist. You will quickly find out that continuing to treat the rest of your family but refusing to treat your spouse will make no sense and will probably not be well-received. And you also know that when something eventually goes wrong at the new dentist, it will naturally be all your fault. Furthermore, having no dental insurance, you will always resent having to personally pay those high dental fees to the new dentist for performing spousal dental care that you always did at no cost to you.

4. Take a chance and covertly continue to both treat and have sex with your spouse. Have your spouse wear a disguise, like a moustache and beard, when she or he enters and exits your dental office. And make sure all appointments are done late at night under cover of darkness. Also, at home, be sure to lock your bedroom door and cover all the windows with black paper.

So, what hope do dentists in Ontario have that this insanity will end? It seems all we can do is hope that the Ontario Ministry of Health will someday come to its senses and change this unrealistic legislation before a lot of good dentists get hurt. Unfortunately, the Toronto Maple Leafs probably have a better chance of winning the Stanley Cup before this current government resolves this issue. And finally, we can all hope that, after the next provincial election, the government of the day will be a little more sympathetic to the thousands of healthcare providers in Ontario who are affected by this harsh legislation. 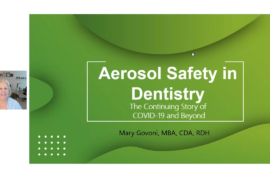