Effect of Toothbrushing with a Dentifrice on Eleven Resin Composites

Introduction
Dental patients expect their resin-based composite (RBC) restorations to behave like natural teeth and maintain their appearance for many years. They do not expect that toothbrushing will have negative effects on the surface of their restorations. These effects can be assessed using a glossmeter and by measuring the surface roughness. It is thought that RBCs containing smaller filler particles will show less reduction in surface gloss and less surface roughness after brushing than those containing larger irregular filler particles. 1,2 Rough dental surfaces will collect more dental plaque and bacteria compared to smooth surfaces. 3-6 This increased level of plaque accumulation is thought to become a concern when the surface roughness is greater than 200 nm. 4

This study determined the effect of toothbrushing with a dentifrice on the surface of eleven contemporary RBCs. The null hypotheses were:

Materials and Methods
Eleven contemporary RBCs that are commonly used in North America were included in this study and Colgate Optic White-Enamel White was used as the dentifrice (Table 1). Ten specimens were made of each RBC. The RBCs were packed into 2 mm deep mold with a Mylar sheet above and below. The RBC was pressed flat to achieve a mirror flat surface and the specimen was light cured for 20 s through the top Mylar sheet using a broadband multi-wave LED dental curing light (Valo Grand, Ultradent Products, South Jordan, Utah, USA). Once made, the RBCs were randomly assigned to groups of ten to ensure there was no preferential treatment during brushing. The RBCs were brushed for 15,000 cycles in a machine that can brush 10 specimens simultaneously (Fig. 1). Soft-bristled toothbrushes (GUM brand 495PC, Sunstar, Guelph, Ontario, Canada) and a load of 176 g was used to provide ~2 N of force when brushing. The RBCs were covered with a slurry of the dentifrice and distilled water made in a 5:8 ratio. 7 To ensure uniform brushing of the entire surface, the brushing machine moved the toothbrushes back and forth across the RBC surface, while the specimens also rotated continuously once every 30 seconds. To ensure equal brushing effects on the RBCs, the specimens were moved to a different brushing station five times during the 15,000 brushing cycles. 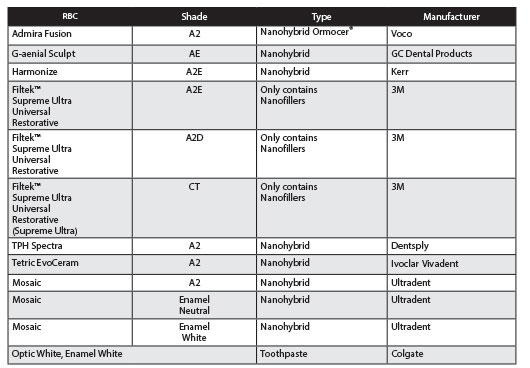 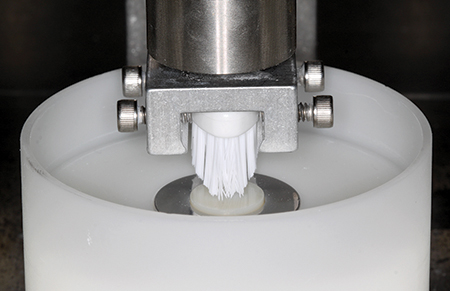 View of RBC specimen in brushing unit. The machine has a total of 10 identical units that are filled with the dentifrice slurry to completely cover the RBC. The toothbrush moves back and forth while the specimen rotates.

The specimens were thoroughly cleaned before the surface gloss was measured using a glossmeter (Novo-Curve G, Rhopoint Instruments, Hastings, UK) at the start and after 5,000, 10,000 and 15,000 back and forth brushing cycles. At the end, this would represent one to two years of toothbrushing in a healthy person. 8-11 After 15,000 back and forth brushing cycles, the surface of the RBCs was scanned using an atomic force microscope (AFM, nGauge, ICSPI Corporation, Rev 1.0, Waterloo, Ontario, Canada) and the average surface roughness (Ra) of the RBCs was calculated.

Results
The surface gloss was negatively affected by brushing with a dentifrice, but the effect was different among the 11 RBCs. The mean and standard deviation of the surface gloss and Ra values are reported in Tables 2 and 3 respectively. 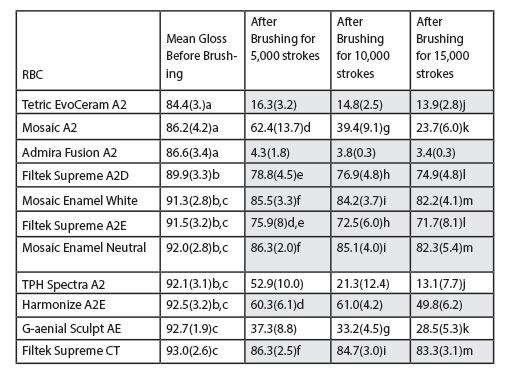 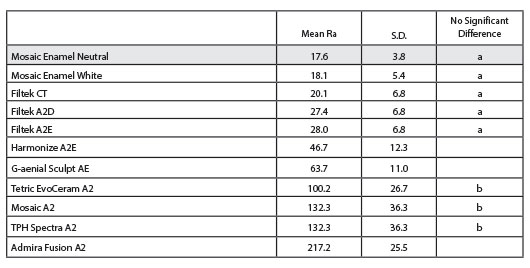 To compare the effects of brushing with a dentifrice on the different RBCs, a post-hoc multiple comparison test (p<0.05) was used (Scheffe’s test). There were differences in the gloss among the eleven RBCs after 5,000, 10,000 and 15,000 back and forth brushing cycles, some of which were significant (Table 2). This test showed that toothbrushing had the least effect on Mosaic Enamel Neutral and Enamel White. After only 5,000 brushing cycles, Tetric EvoCeram A2, Mosaic A2, G-ænial Sculpt AE and Admira Fusion A2 had more than a 50% reduction in gloss. The gloss of Admira Fusion was the most affected by toothbrushing (Table 2) (Figs. 2B & 3). 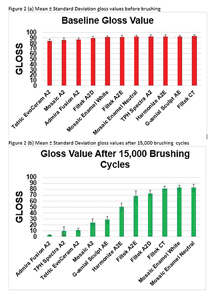 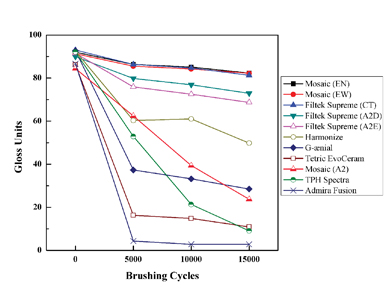 The three-dimensional images of the AFM scans after 15,000 brushing cycles are shown in Figure 4. The surface of Admira Fusion A2 had larger peaks and troughs compared to Mosaic Enamel and Filtek Supreme Ultra CT, A2E and A2D that all appear relatively flat across the surface. Similar results are also visible in the 2-dimensional surface profiles of the AFM data shown in Figure 5. After brushing there was a significant difference in the surface roughness among some of the 11 RBCs. Table 3 shows that after 15,000 back and forth brushing cycles, the average roughness of Admira Fusion was more than an order of magnitude rougher than Mosaic Enamel and Filtek Supreme Ultra (from 17.6 nm for Mosaic Enamel Neutral to 217 nm for Admira Fusion).

Representative atomic force microscope scans taken at the same magnification of the brushed side of the RBCs [shade in square brackets], after 15,000 brushing cycles. The average roughness values (± standard deviation) from the ten repeats are also reported.

Representative line profiles from the atomic force microscope (AFM) examination after 15,000 brushing cycles. Each RBC is compared to the effect on Mosaic Enamel Neutral.

Average roughness and average gloss for each RBC after 15,000 brushing cycles and the reference tile ▲ plotted on a
semi-logarithmic scale. Note the excellent linear correlation between the roughness and the logarithm of the gloss (R2 = 0.97).

Discussion
The null hypotheses that there would be no significant difference in the gloss among the eleven RBCs after 5,000, 10,000 and 15,000 back and forth brushing cycles was rejected. Since there was a difference in the surface roughness (Ra) among the eleven RBCs after 15,000 back and forth brushing cycles, the second hypothesis was also rejected.

Figure 6 shows that the gloss of the RBCs was strongly related to the surface roughness (R2 = 0.97). Figures 2, 3 and 4 and Tables 2 and 3 clearly show that the effect of brushing on the surface was highly dependent on the RBC. Even after 15,000 brushing cycles, there was little effect on the Mosaic Enamel and Filtek Supreme Ultra composites, while Admira Fusion A2 was the most affected by toothbrushing. The third hypothesis was also rejected because the average roughness of Admira Fusion (Ra = 217 nm) was greater than 200 nm after 15,000 brushing cycles.

The lack of any significant changes in the gloss values between the 5,000 and 15,000 brushstrokes (Table 2) for Mosaic Enamel Neutral, Mosaic Enamel White and Filtek Supreme Ultra CT, A2E and A2D is of clinical relevance. This result suggests that toothbrushing has no further effect on the surface gloss of these RBCs once the initial layer of RBC is removed. Conversely, for the remaining RBCs, the decrease in the gloss values as the number of brushing cycles increased indicates that the surface of these RBCs continues to become rougher with more toothbrushing.
According to the manufacturer, the relative dentin abrasivity (RDA) of Colgate Optic White-Enamel White Toothpaste (Colgate-Palmolive, Toronto, Ontario, Canada) is 101, and thus is well within the 250 maximum upper limits for dentifrices set by the American Dental Association. 12 However, the RDA value is not the only factor that affects how dentifrices affect the surface of RBCs. Colgate Optic White-Enamel White contains hydrogen peroxide, which may also have a negative effect on the surface roughness of RBCs. 6

The AFM results in Figures 4 and 5 show peaks and valleys appear on the surface of some RBCs, with the Admira Fusion samples having the roughest surface. The large filler particles in this RBC remained unaffected by the toothbrushing as the softer resin matrix was brushed away. The surface of the purely nano-filled RBCs (Filtek Supreme) that have particles from 5 to 20 nm in size, (which may be agglomerated into clusters that reach 600 to 1,400 nm in size) and nano-hybrid RBCs that contained a mixture of nanoparticles and small particles (Mosaic Enamel) were largely unaffected by the toothbrushing.

Since the gloss after brushing was visibly different among the eleven RBCs, it brings aesthetics, roughness and the risk of bacterial adhesion into consideration when choosing which RBC to use. The Mosaic Enamel and Filtek Supreme Ultra composites had the highest gloss values after 5,000, 10,000 and 15,000 brushing cycles and low roughness values after 15,000 cycles (Figs. 2-5). Compared to the other RBCs, both Mosaic Enamel and Filtek Supreme Ultra composites should continue to feel smooth to the patient, be less susceptible to surface stain, and accumulate less bacteria than the other tested RBCs. However, the authors do recognize that the wear of the RBCs was not quantified, and it is possible that although the gloss and roughness might be acceptable, these RBCs may wear faster or have inferior physical properties compared to the other tested RBCs.

Conclusions
Within the limitations of this in vitro brushing study, the following conclusions were made:

Dr. Price teaches at Dalhousie University, Halifax, Canada and also works as a Prosthodontist in the Faculty Practice at Dalhousie University. He received his BDS from the University of London, England and his DDS from Dalhousie’s Faculty of Dentistry. He completed his specialty training in Prosthodontics at the University of Michigan in 1984 and in 2001 he completed his PhD in Oral Technology and Dental Materials at the University of Malmö, Sweden. He is actively involved in research on implants, dental resins, curing lights and teaching light curing. He has made numerous presentations, authored more than 150 peer-reviewed articles, and co-authored the chapter on Light Curing in the 7th edition of Sturdevant’s textbook, Art and Science of Operative Dentistry.

RELATED ARTICLE: Illuminating the Resin: What You Need to Know 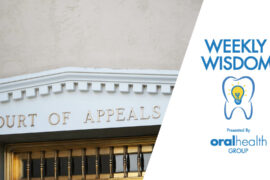