Introduction
Enhanced magnification and visualization, innovations in instrumentation, new sealing materials and the incorporation of soft and hard tissue augmentation practices have brought Endodontic Microsurgery (EMS) from a last resort procedure to an integral part of endodontic retreatment.1,2 The retreatment of a failing root canal treatment is fraught with potential complications. The removal of cast posts (size and length can potentiate fracture)3 distinguishing bonded fibre posts from the surrounding dentin,4 removal of separated instruments5 negotiating blocked canals,6 circumventing ledging and a myriad of other factors can complicate removal of the residual bio-load and impede resolution of periradicular pathosis.7,8. Where possible, retreatment alone would be the treatment option of choice, however, where retreatment risk factors are high, EMS is the most viable option, far more so now than prior to the transition to microsurgical protocols.

Contemporary EMS protocols provide for minimal flap size, small osteotomies and resections perpendicular to the long axis of the root. These minimally invasive practices reduce morbidity, accentuate more rapid healing, minimize the size of the retro-preparation and the number of dentinal tubuli exposed.9 Magnification and illumination have lessened the risk of damage to anatomic structures such as the IAN, maxillary sinus and the greater palatine nerve and artery. Given the inability to visualize the surgical site in three-dimensions, the possibility of procedural error remains, thus impacting on treatment options.10-13

Recently, Dynamic Navigation technology has been used in EMS to guide cutting instruments, including piezotomes, in real time, to perform osteotomies and apicoectomies. Dynamic Navigation systems map the patient’s jaws to their cbCT scan by trace registering landmarks on teeth of the jaw to be treated. The system’s stereoscopic camera recognizes optical markers attached to the jaw to be treated and the instrument to be used and monitors the drill or saw position during the surgery. Unlike static navigation guides, Dynamic Navigation procedures are not constrained to a predetermined path, there is no risk of distortion as a complication of the guide fabrication, and the inability to work in restricted areas of the mouth due to the bulk of the guide is obviated.

Dynamic navigation enables adjustment of the osteotomy pathway and the angle of the root section during the EMS procedure. The clinician follows the surgical instrument’s movement in three-dimensions on the computer monitor and assesses the surgical site through the microscope oculars. This case report presents the use of Dynamic Navigation to avoid damage to the Schneiderian membrane of the maxillary sinus while performing EMS in an anatomically challenging space.

Case Report
A 50-year-old male patient presented with moderate pain associated with a previously treated maxillary right second premolar (tooth #1.5). The medical history was non-contributory. The tooth had been endodontically treated and restored with a cast post/core and full crown. The patient’s scan (cbCT) revealed two separate roots, an intact buccal plate and an apical lesion associated with the palatal root (Fig 1). The tooth was moderately sensitive to vertical percussion, periodontal probe depths and mobility were within normal limits. The diagnosis was symptomatic apical periodontitis associated with a previous root canal procedure. After consultation, the patient chose to have EMS treatment done with Dynamic Navigation. 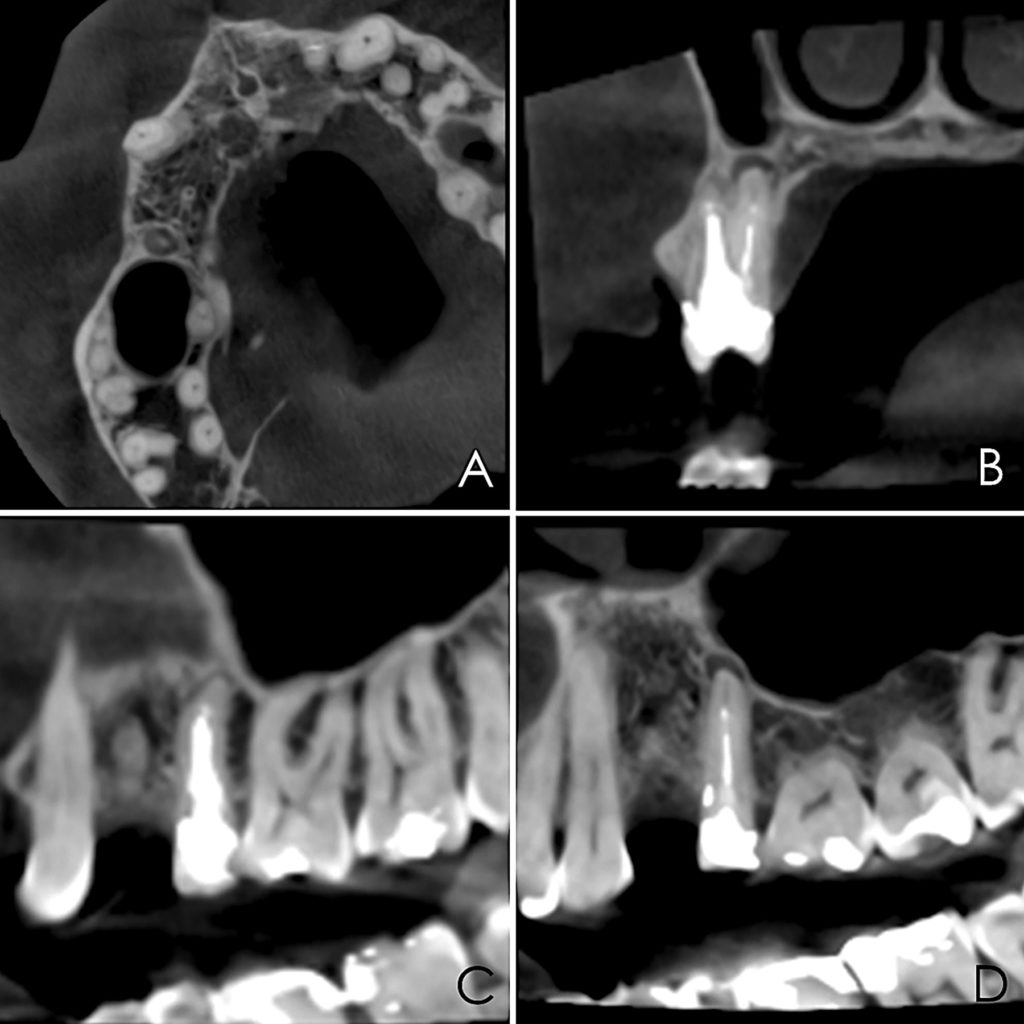 Lidocaine 2% with 1:80,000 epinephrine (New Stetic, Guarne, Ant. Colombia) was used to achieve profound local anesthesia and a full thickness mucoperiosteal flap with a vertical releasing incision was elevated. (Fig 2A). 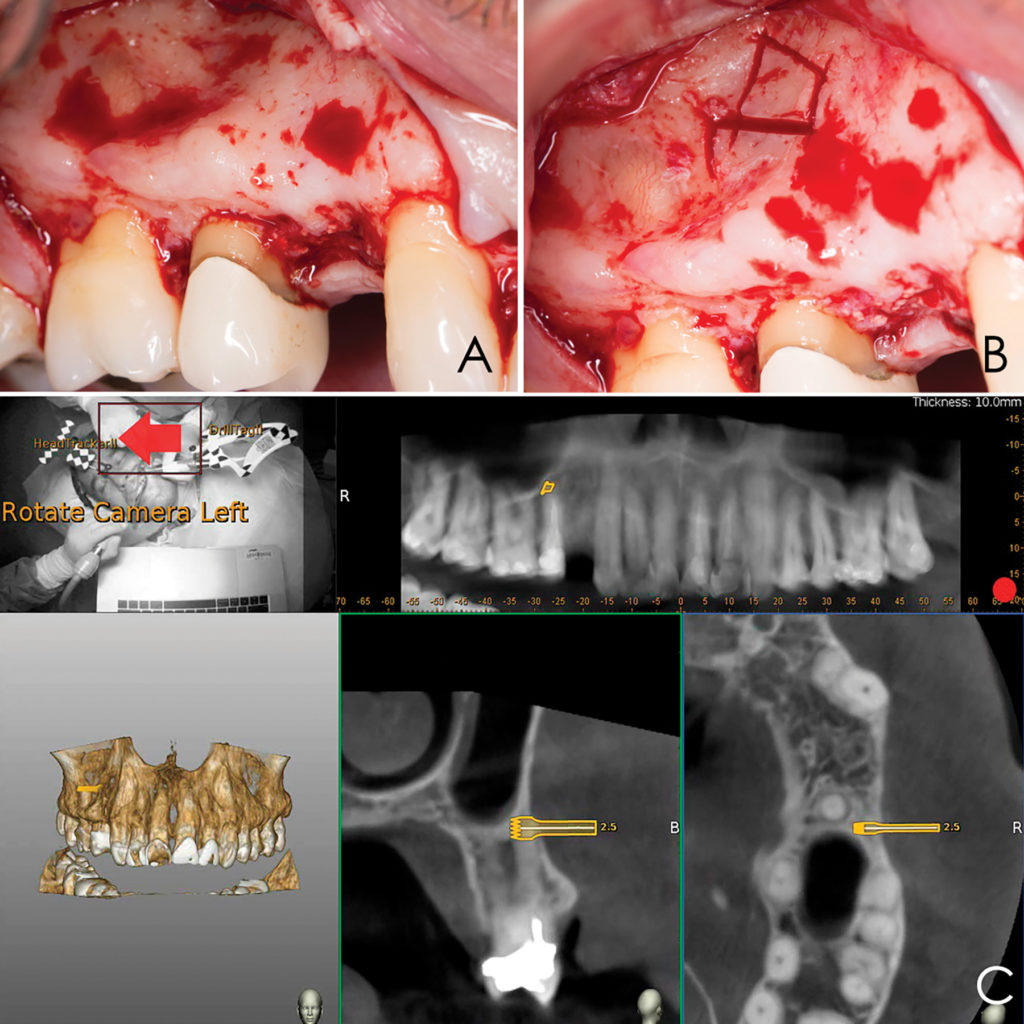 Surgical procedure. A. A full thickness mucoperiosteal flap was raised exposing the overlying cortical bone of tooth #1.5. B. The periphery of the cortical window is shown. The efficacy and accuracy of Dynamic Navigation enables a minimally invasive resection of the lid due to the real-time feedback from the monitor. C. The micron tracker identifies the tag attached to the Piezotome handpiece. The calibrated avatar saw tip is visualized on the cbCT, the periphery of the cortical window outlined, the bone lid removed and the apices resected. The saw position can be oriented perpendicular to the long axis, the lingual aspect of the root and the proximity to the sinus demonstrated.

Three landmarks (up to 6 can be used) were marked on teeth displayed in the patient’s scan in a non-colinear array. A Head Tracker (optical marker) was secured to establish jaw position, a tracer tag attached to a tracer tool and a stentless trace registration of the maxilla done by creating a cloud of points around the landmarked teeth thus accurately mapping the avatar maxilla on the cbCT.

An accuracy check was performed to verify the trace registration, a drill tag (optical marker) was secured to the Piezotome® Cube handpiece (Acteon group, France) by an adapter, the LC2 saw secured to the handpiece and the saw tip calibrated. The Dynamic Navigation software algorithms enable the micron tracker (stereoscopic camera) to identify the avatar saw tip as it cuts the periphery and depth of the cortical window (Figs 2B, 2C). The position of the saw at the periphery of the palatal root resection can be precisely tracked thus preventing a sinus communication (Figs 3A, 3B). The retro-preparations were done using a E30RD ultrasonic tip (USA – NSK-Nakanishi International). 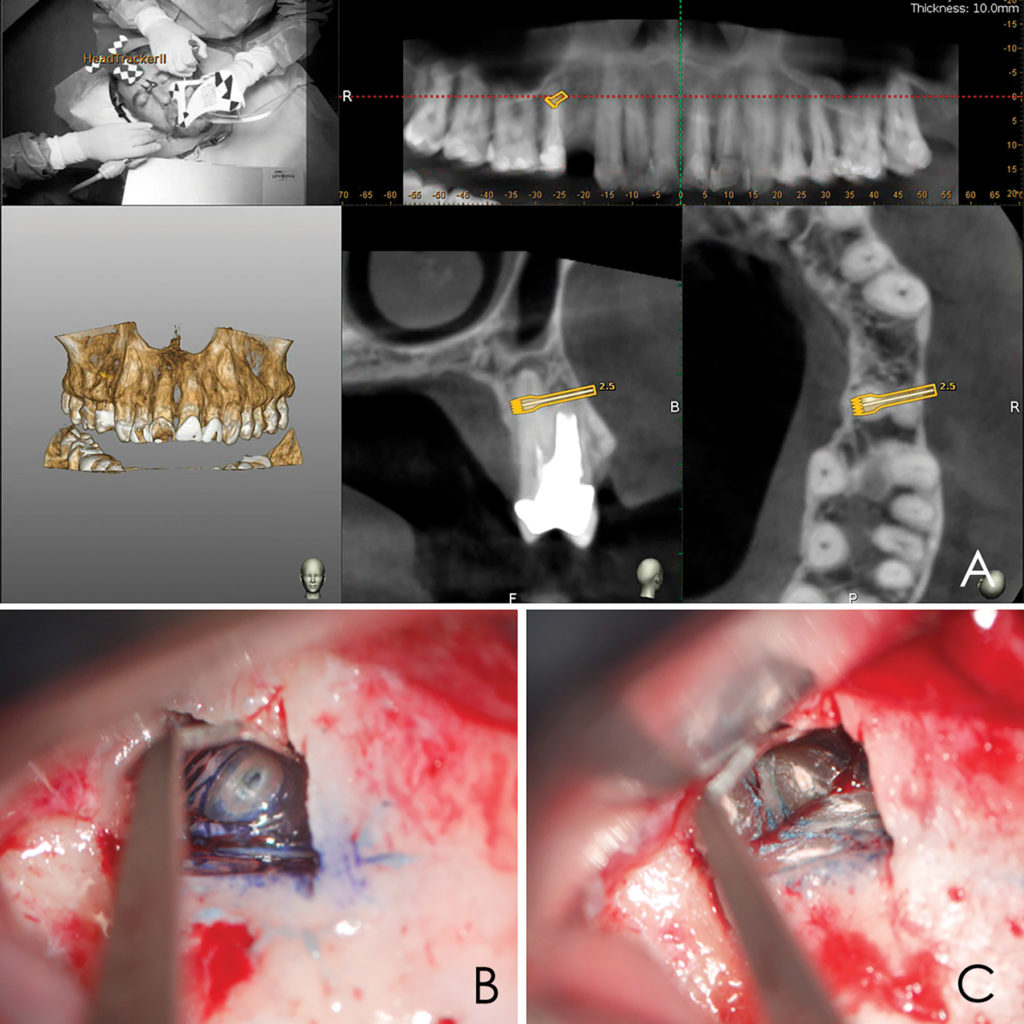 Preparation of the root end. A. The resection of the palatal root is performed while observing its progress on the computer monitor. B. Buccal and palatal canals were retroprepared. C. Apical cavities were filled with EndoSequence BC RRM Fast Set Putty (Brasseler, Savannah GA).

EndoSequence BC RRM Fast Set Putty (Brasseler, Savannah, GA) was used as the retro-sealing material (Fig 3C). Radiographs were taken to confirm the density and position of the retroseals. The post-surgical cbCT confirms the precision of the saw cuts resulting in accurate resection of both roots without complications ensuant from an iatrogenic tear of the sinus membrane (Fig 4). 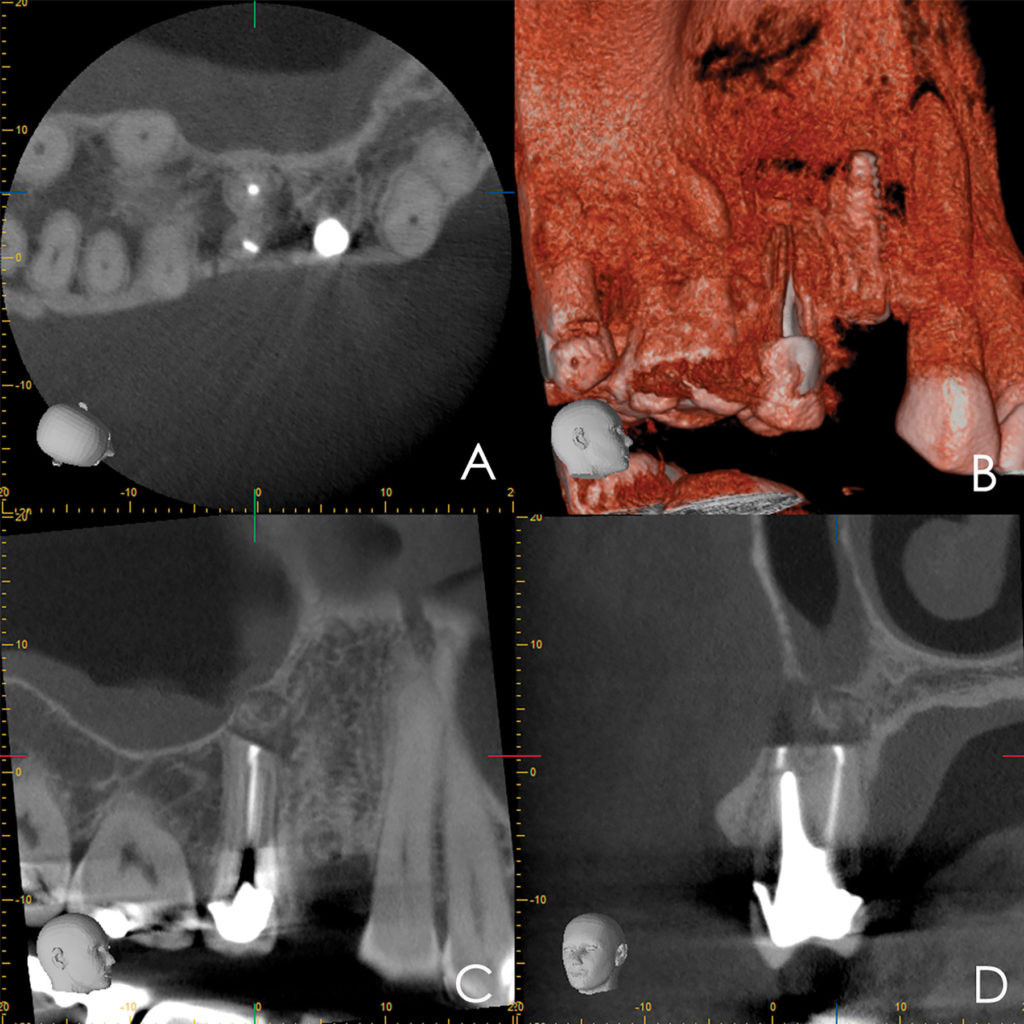 Discussion
Dynamic Navigation has been shown to be more accurate than freehand and static navigation in surgical implant placement.14 Its effectiveness has been demonstrated for the removal of foreign objects from the maxilla and mandible, repositioning of the IAN and removal of pathology with minimal hard and soft tissue damage.15-18

Piezosurgery is a relatively new surgical technique. Its major advantages include; precision, ease of curvilinear osteotomy, less trauma to soft tissue, preservation of neurological and vascular structures, reduced hemorrhage, minimal thermal damage to the bone, and improved healing. Piezoelectric bone surgery has been demonstrated to mitigate complications during maxillary osteotomy procedures, such as oroantral communication.19-23 Vercellotti et al. introduced the piezoelectric bony window osteotomy as a simplified technique for sinus elevation24. Due to the cessation of the surgical action of the piezoelectric scalpel when it comes in contact with nonmineralized tissue, there is a reduced risk of iatrogenics25. In conjunction with Dynamic Navigation, Piezosurgery allows for the creation of a cortical window which accurately approximates the pathology about the root apices.

Conclusion
Dynamic Navigation is an exciting and promising adjunct for enhancing positive EMS outcomes in contrast to the efficacy of static navigation guides. The real-time feedback feature of Dynamic Navigation technology mitigates risk in areas close to anatomic structures. Selective and controlled osseous dissection is enhanced. The ability to alter the surgical pathway provides for an improved margin of accuracy and degree of safety. Its use in other aspects of EMS are being evaluated.

Kenneth S. Serota has been active in online education since 1998, he is the founder of the Endodontic forum ROOTS and the interdisciplinary Facebook forum NEXUS. Dr. Serota is a clinical instructor in the University of Toronto postdoctoral endodontics department. He is the social media and marketing director for Navident Dynamic Navigation.

Dr. Felipe Restrepo is an Associate Professor at the Universidad de Antioquia teaching their postgraduate level students in endodontics and also Director of the Dental Emergencies Diploma. Dr. Restrepo has authored scientific articles in peer-reviewed journals. He can be reached at felipe.restrepo@udea.edu.co

To view the entire digital edition of the May 2020 Endodontics issue, please click here.