What happens when irrigants such as chlorhexidine or sodium hypochlorite are expressed out of the apex?

All irrigants with bactericidal action are irritating and toxic to apical tissues to one degree or another. Of the commonly used endodontic irrigants, 5.25% sodium hypochlorite is the most irritating solution if extruded beyond the apex followed by 2% chlorhexidine and an EDTA solution like SmearClear (SybronEndo, Orange, CA, USA). The degree of inflammation, pain and possible tissue destruction of sodium hypochlorite is a function of the volume and concentration of the solution extruded and of course, the anatomical area into which the solution is deposited.

While there is no universally agreed upon regimen for irrigation, general recommendations can be made:

1) There is literature-based evidence that heating irrigation solutions improves their effectiveness.

3) Greater volumes of irrigation are more effective than smaller. While there are no established guidelines as to what the ideal volume of irrigation per canal should be, 2-3ml of solution per canal would be too little relative to using 80-150cc per molar tooth.

For practicality, it is most effective to use pre-drawn syringes of irrigant and have multiple syringes available for use at any given time. I have found that the Ultradent 5cc impression syringes (Ultradent, South Jordan, UT) when used for irrigation have a very smooth mechanism for extrusion and are most convenient for irrigation with regard to size, ease of pushing.

Prevention of the extrusion of irrigants is a key component of the safe and effective irrigation of root canal spaces and obtaining optimal bactericidal action. Wedging of needles into canals and expressing irrigants forcefully can easily cause unwanted extrusion.

Strategies to prevent extrusion include:

1) Never lock the needle in the canal at any time. Irrigation should be passive and gentle with the syringe always in movement vertically or apically.

2) A close-ended side-venting needle is optimal to prevent extrusion, albeit with the limitation that there is not flushing apically beyond the level of the orifice of the needle.

3) Choosing the correct irrigant for the particular case and indication is essential. In cases of possible perforation or communication of the canal (resorption, etc) to the tissues beyond the tooth, chlorhexidine is optimal.

4) Using rotary nickel titanium files with force and a pumping motion can easily force debris through the apex through its piston like action. Irrigation and dentinal debris often called the “endodontic worm” can be extruded which can set up potentially difficult inflammation and pain for a patient if the RNT file is pumped in the canal.

5) Ideally, all instrumentation, irrigation, and obturation should terminate at the minor constriction (MC) of the apical foramen. Termination at this point and respect for the position of the MC can minimize extrusion, especially compared to a reality where the clinician might be instrumenting beyond the MC and cause iatrogenic outcomes including enlarging the MC and extrusion.

Dr. Mounce has no commercial interest of any kind in any products mentioned in the article.

Dr. Mounce is in private practice in endodontics in Vancouver, WA, USA. He can be reached at RichardMounce@ Mounce Endo.com. 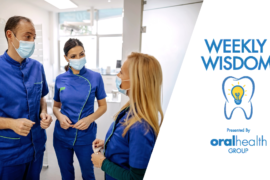 Weekly Wisdom: Growing Your Leadership to Grow Your Practice