Abstract
Today’s preventive practice provides the ability to intervene in the demineralization process and return the client to health often without the use of restorative techniques. Evidence-based research promotes the use of sodium fluoride varnish compared to other methods of delivery of professional topical fluorides. The overall goal of this article is to provide the reader with information on the use, efficacy and safety of professional topical fluorides for integration into dental hygiene practice.

Today’s preventive practice has the ability to focus on prevention of dental caries through intervening in the caries process. Demineralization may be tipped back to remineralization often returning the client to health without the use of restorative techniques. Although caries are largely preventable, 96% of Canadian adults have a history of caries. According to the Canadian Health Measures Survey conducted from 2007–2009, over half of Canadian children and adolescents aged six to 19 years old are affected by dental caries. 1 Among five to 17-year-olds, dental decay is five times as common as asthma and seven times as common as hay fever. 2 The average number of teeth affected by decay in children aged six to 11 and 12 to 19 year olds is 2.5. 2

Additional implications of tooth decay include pain and discomfort, traumatic and expensive dental experiences involving restorative procedures and/or extraction, and the negative impact on scholastic abilities. According to the Canadian Institute for Health Information, severe tooth decay is the leading reason Canadian preschoolers have day surgery each year. 3

The Calgary Study
The impact of fluoride cessation was studied in Calgary with the results being recently published in the Journal of Community Dentistry and Oral Epidemiology. 5 The objective of the study was to examine the short-term impact of fluoridation cessation on school children (Grade 2) in two similar cities in the province of Alberta; Calgary and Edmonton. The researchers found a statistically significant increase in dental caries in Calgary where community water fluoridation was stopped in 2011 due to debate over safety coupled with the community cost factor. Dentists, however, did not agree with the decision and continued to argue for fluoridated water as an ideal and cost effective method for fighting tooth decay, especially for those who cannot afford to visit a dentist regularly. 6

Not only was there an increase in caries in Calgary but also an increase in severity occurring at a younger age. “It’s not unusual for us to see a child with almost full-mouth decay in the population that we’re looking at, and considering that we’re in Calgary, we shouldn’t be seeing that degree of disease here and we are,” said Denise Kokaram, of the Alex Dental Health Bus. 7

Again, with a disease that is highly preventable and relatively easy to remedy, this result is very troubling. The end result of this study substantiates the supportive role of water fluoridation in contributing to caries prevention in children.

Community water fluoridation has been the source of considerable controversy since its introduction in the 1940’s. In a world where we are continually bombarded with information overload, much of which is based on opinion rather than scientific fact, we must be careful to make judgments based on science and evidence. There are many long-term studies conducted by respected agencies such as the World Health Organization, and Health Canada supporting scientific fact regarding fluoride safety; both community water fluoridation and professional delivery.

The Canadian Dental Association supports the appropriate use of fluorides in dentistry as one of the most successful preventive health measures in the history of health care. Over 50 years of extensive research throughout the world has consistently demonstrated the safety and effectiveness of fluorides in the prevention of dental caries. 8

Fluoride varnish possesses a number of unique properties including the application of an increased concentration of fluoride that remains directly in contact with the outer surface of the tooth structure for an extended period of time (approximately 1–7 days). 9 It is quickly and easily applied without the use of trays. Inadvertent ingestion is very unlikely due to the properties of the varnish and its immediate adherence to the tooth surface upon contact with saliva. In contrast, the exposure of fluoride to tooth structure for a gel or foam is typically 15 minutes.

It is important to note that fluoride varnish dispensed from a tube versus individual dose packaging cannot ensure a uniform therapeutic dose. This is due to phase separation that occurs resulting in a variation of fluoride content. 10

What’s the Evidence?
In 2006, the Council on Scientific Affairs of the American Dental Association published recommendations for the use of professionally applied topical fluorides for caries prevention based on a systematic review of clinical trials and evidence-based studies. The clinical recommendations and supporting systematic review were updated and published in 2013. 11

The following are the recommendations supporting an evidence-based approach to care.

Children 6 Years of Age and Under
Only 2.26 percent fluoride varnish (5.0 percent NaF) is recommended for children younger than six years of age. In children younger than six years, there is strong evidence from systematic reviews of randomized controlled trials supporting fluoride varnish applications at six-month intervals for moderate-risk patients and for applications of fluoride varnish every three months in high-risk patients. In this age group, the risk of experiencing an adverse event such as nausea or vomiting associated with swallowing professionally applied topical fluoride agents presents a real concern. Minimizing this risk was only supported by the use of fluoride varnish. Until the introduction of fluoride varnish, there was not a ‘safe’ option to deliver high concentration fluoride to young children without the possibility of ingestion. Even though the concentration of fluoride in a 5% NaF varnish is almost twice as high, the amount required for a treatment application of varnish, approximately 0.1–0.5 ml depending on age compared with 4–8 ml for an APF gel. Ingestion is minimal due to the tenacious adherence of the fluoride varnish to the tooth structure.

Fluoride gels/foams in trays or fluoride rinses should not be used due to the toxicity risk if swallowed. Refer to Table 1 for fluoride ion and sodium fluoride concentrations of topical fluoride agents. In additional, gels and foams take a minimum requirement of four minutes in contact with tooth surfaces making the treatment challenging for young children as well as elderly clients. Furthermore the use of a one-minute product including both gels and foams is not endorsed. 11 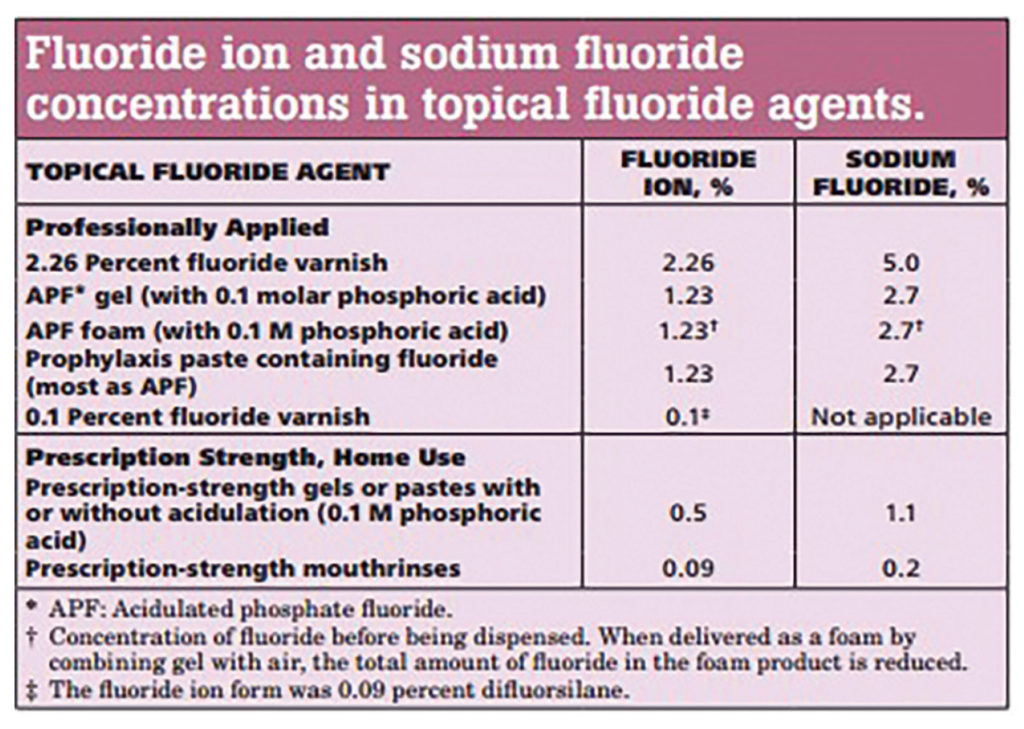 The ability of fluoride varnish to adhere to the tooth structure provides for a slow release of fluoride over time. A clinical study conducted by Stearns et al concluded that children six to 44 months of age who had four or more applications of fluoride varnish demonstrated a 39 percent reduction in caries-related treatment in anterior teeth. 12 Children in this same age group who received no varnish were more than two times as likely to develop decay as those who received an annual varnish application. 13 Fluoride varnish should be part of all preventive strategies aimed at high-risk children in this age group.

Children 6 Years of Age and Older
Fluoride varnish or 1.23 percent fluoride (APF) gel are recommended for clients 6 years of age or older. The frequency of application is at least every three to six months pending the level of determined risk. The level of risk related to caries incidence is related to environmental factors, predisposing factors balanced against protective measures. A person is considered to be at low risk if she or he has had no caries including incipient lesions, in the past three years and has no other risk factors. Caries risk factors include but are not limited to the following: one or two incipient or cavitated carious lesions in the past three years, low socioeconomic status, suboptimal fluoride exposure, xerostomia, poor oral hygiene, cariogenic diet, exposed root surfaces, drug or alcohol abuse, many existing multi-surface restorations, defective restorations, orthodontic therapy, and physical or mental disability.14 3M has created a caries risk assessment form for ‘patients zero to five years’ and ‘six years and older’. This is available in a ‘Post-It’ note format. Refer to Tables 2 and 3. 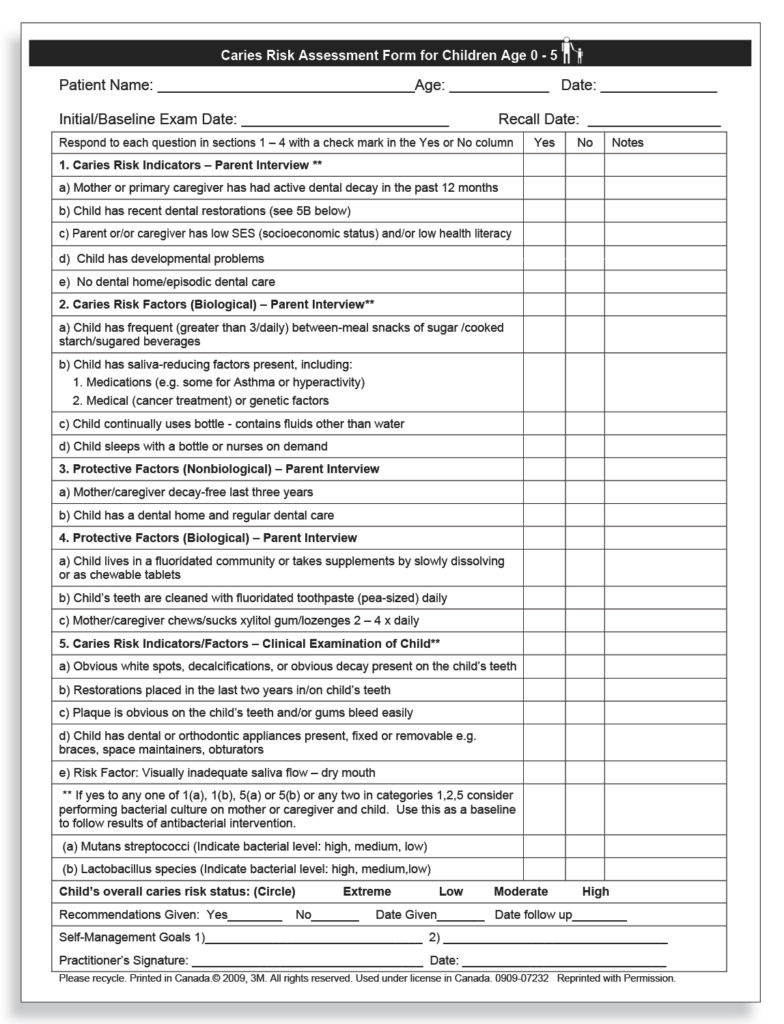 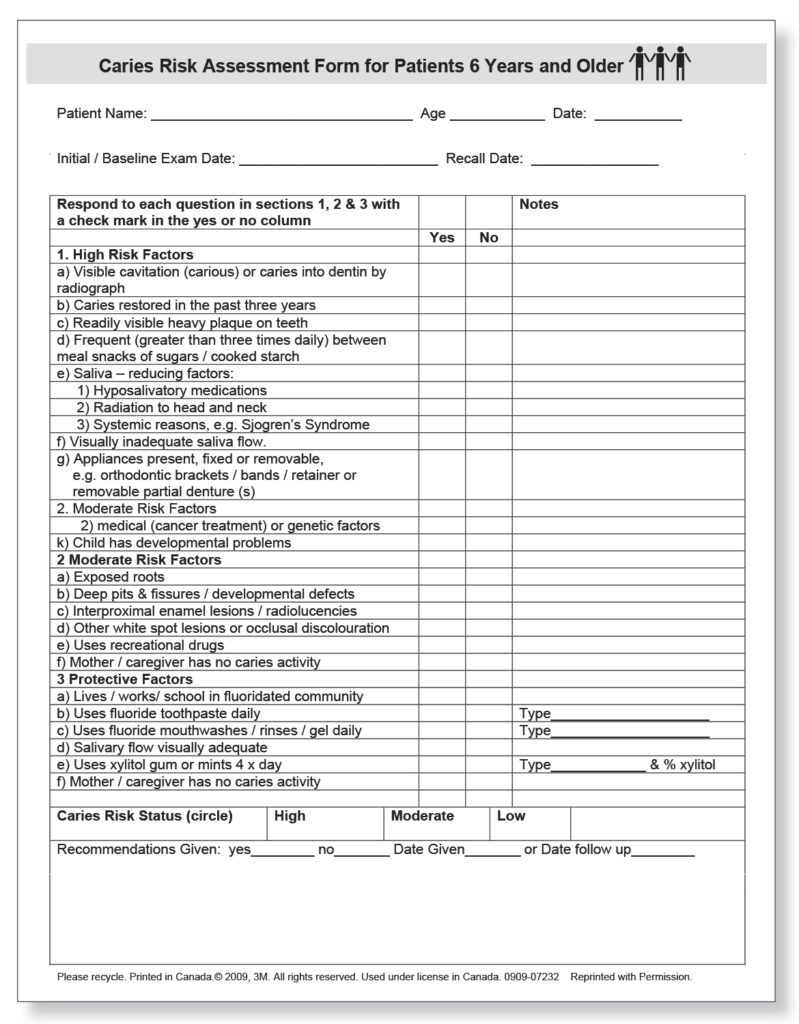 In contrast, neither professionally applied rinses nor fluoride foams have been sufficiently evaluated to recommend their use over APF fluoride gel or fluoride varnish. The 2006 ADA recommendations acknowledge that while foams are commonly used in dental practice, the weight of evidence for effectiveness is not as strong as gels and varnish. 9 In the updated ADA clinical recommendation guidelines, the use of 1.23 percent fluoride (APF) foam was not recommended either. A benefit was found using the foam in children younger than six years of age, however, the potential for harm, including swallowing APF foam outweighed this benefit. There was no benefit derived from 1.23 percent APF foam application twice per year for four minutes for caries prevention in the six to 18-year-old age group.

Refer to Table 4 for a summary of clinical recommendations for use of professionally applied topical fluorides. 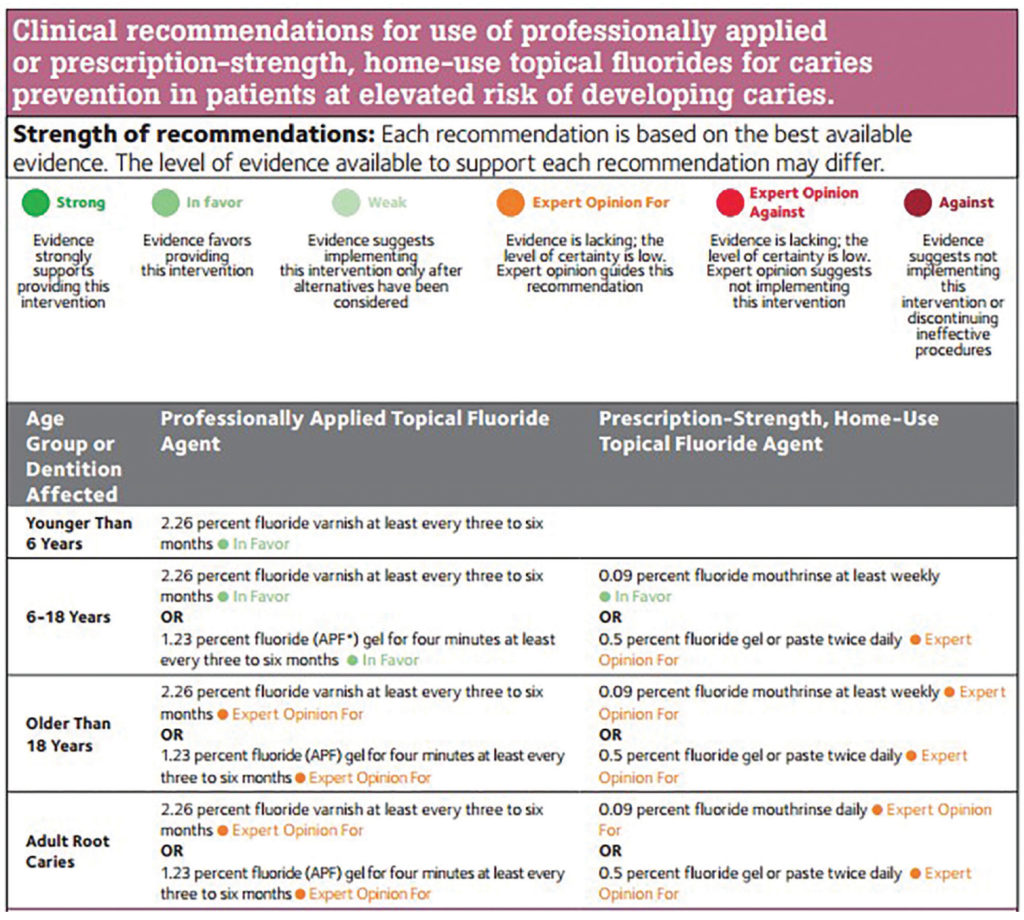 Aging Population and Caries Incidence
When we think of fluoride, we often equate the benefits simply for children. The adult population who are at moderate to high risk for caries also are in need of a fluoride treatment. By 2021, there will be eight million Canadians aged 55+. Are we prepared to meet the needs of the ‘silver tsunami’? More than one third will have root caries requiring both restorative and periodontal services.15 This is exacerbated with the need for multiple medications, which often induce xerostomia (dry mouth). There are over 400 medications, which induce xerostomia. Not only the quantity but also the quality of saliva is greatly hindered making this segment of the population caries prone.

Numerous studies have concluded that fluoride varnishes are capable of depositing large amounts of fluoride on human enamel and it has also been concluded that the amount deposited on demineralized enamel is greater than that on sound enamel. 16 Vanish™ White Varnish contains 22,600 ppm fluoride and an innovative tri-calcium phosphate (TCP) ingredient. Why is this important? In most cases, when calcium and fluoride are together in a formulation, they will combine through chemical bonding to form relatively insoluble calcium fluoride. In Vanish™ White Varnish, the tri-calcium phosphate is surrounded by a dissolvable coating which protects the calcium ensuring there is no reaction with the fluoride in the packaging prior to dispensing. Once the product is introduced into the mouth, the saliva breaks down the coating, releasing the bioavailable TCP, calcium, phosphate and fluoride for optimal remineralization.

A Model for Decision Making
In conclusion, a dental hygienist is directed to apply evidence-based decision making as a model for guiding dental hygiene treatment planning. This is the “integration of best research evidence with clinical expertise and patient values and expectations. When these elements are integrated, clinicians and patients form a diagnostic and therapeutic alliance which optimizes clinical outcomes and quality of life.” 17,18 Fluoride varnish presents a safe and effective means to address one of the nation’s most chronic diseases. Is scale, polish, fluoride…routine or evidence based in your dental hygiene practice? You decide.

Jo-Anne Jones, President, RDH Connection Inc. As a successful entrepreneur and international, award winning speaker, Jo-Anne has been selected as one of DPR’s Top 25 Women in Dentistry and is a returning Dentistry Today CE Leader for the 7th consecutive year. Jo-Anne is president of an educational and clinical training company recently awarded the ‘Elizabeth Craig Award of Distinction’ in recognition of her exceptional and ongoing commitment to promoting the dental hygiene profession. She may be contacted at jjones@jo-annejones.com.

Disclosure:
Jo-Anne Jones is consultant for a number of leading dental corporations including 3M Oral Care and has received financial compensation for writing this article.