How Fit is Your Most Valuable Piece of Equipment?

Just shy of one year ago I abruptly found out that the most important piece of equipment in my office was not operating at peak performance. How could this be? I insist that the curing lights be checked on a regular basis, sterilization equipment be monitored weekly, test films be put through at the beginning of each day, and even the smallest signs of problems be rectified immediately. Due diligence of the physical equipment is not enough to insure that the day-to-day production and viability of your office continues. In the blink of an eye I quickly realized that the most important asset in my office was me! An awkward movement caused by a cough forced the abrupt contraction of my lower back muscles. This left me lying on the floor in the vice-like grip of severe and unrelenting pain. After one hour of rolling side to side like a helpless turtle I realized that the only way I would be leaving my office would be on the scoop that would deliver me to the ambulance. My ultimate destination was St. Michael’s hospital where they would rule out any spinal trauma. That 45-minute ride through the city (thankfully no sirens) brought many things into focus, the most important one being this: how long would it be before I could get back to work? Unless you had the force with you and knew enough to bail out of Nortel in the summer of 2000 (when it was at its peak of CDN$124.50) then I am sure that you are like most of us and realize that Freedom 55 occurs when your youngest child turns 55. Consequently, early retirement was not an option.

A twelve-hour stint in the emergency ward and enough drugs pumped into me to make Keith Richards envious were all that I needed to make the definitive commitment to turn this negative into a positive. After being poked and prodded by the neurological resident, it was concluded that I was suffering from lower back muscle spasm caused by being severely out of shape–in short I had rested on my laurels and gotten fat. All the Coca-Cola, desserts, 18-oz steaks with garlic bread, and second helpings, had caught up with me. At 45, how foolish I was to think that running once a week was sufficient to keep me in shape. My return trip home at 2:00 a.m., fully reclined in a chauffeur-driven ambulance, did not make the situation appear any brighter. The next four days in bed were unbearable. The ultimate blow occurred when my three-and-a-half-year-old daughter asked if she could bring me my cane.

Was I in this alone as middle age approached or are others cursed with the same affliction? A brief scan of the web revealed that I was in good company. According to the University of Iowa Health Care, 60-80 percent of all Americans have low back pain at some time in their lives. After upper respiratory infections (including colds), back pain is responsible for the most workdays lost in the United States each year. In addition, the American Association of Chiropractors reports that back pain is the number one problem facing the work force in the United States today. Also lower back pain is the number one leading impairment in occupational injuries as well as the leading cause of disability between the ages of 19-45. To make matters worse the American Academy of Orthopedic Surgeons explains that when back pain first occurs, the body’s immediate response is to shut down movement to the aggravated area, which causes the muscles and spine to tense even more and allows the back to be easily re-aggravated.

Once I was able to drag myself out of bed, getting dressed was unthinkable without the standard issue neoprene back brace. A few days later, staying true to my word, I called my regular Sunday morning running partners, Dr. Shhhh and the Lean Machine, and asked them for their secret weapon, Big Bad John! A cross between a Marine drill sergeant and a highly trained pro athlete strengthening coach, this trainer would turn out to be my ticket to getting back on my feet. My meeting with John began with a total assessment of my physical picture. It was easily concluded that I was the next cover model for Fat Boy Quarterly. After evaluation of the gathered data an appropriate exercise program was drafted and quickly implemented. Coca-Cola was replaced with copious amounts of water, high fat desserts were replaced with fresh fruit, and fish and chicken were increased to replace a high red meat diet. Life didn’t stop but a more sensible approach to eating took hold. The exercise regime consisted of weight training to reinforce core stability. Cardiovascular strengthening including running 3-6 miles five times per week. After six months, 25 pounds of fat were shed and 4-5 inches disappeared from my waist. As you might expect my back has never felt better and day-to-day activities are effortless.

A big part of my results are due to focus and determination. However, like any endeavor, without the proper coach to oversee that the correct technique is maintained a favorable outcome is not assured. Continuous motivation and tenacity, especially at 5:30 a.m., are vital, yet with the pressures of our practices and the time commitments to our families we often ignore our own needs. However, the next time you send your hand piece for repair take a moment to think that maybe this is the ideal time to reflect on when was the last time you were oiled, lubed and turbine changed? 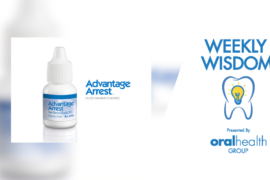