If You Are Wearing Loupes … the Line Never Blurred

A while back, I read an editorial, When Did the Line Blur? (Oral Health, Feb. ’06), that when done caused me to raise a “spockian” eyebrow. What seemed to resonate through the article was that “cosmetic dentists” are over zealous practioners with little regard for the patient’s well being. As a dentist who focuses on appearance related procedures, I guess I too am lumped into the “cosmetic dentist” group.

In reading the editorial, the author asks “when did we move from purely evidence-based scientific health profession to become purveyors of beauty parlor schlock with no science behind it?” An interesting observation, but one that could not be further from the truth. Cosmetic dentists on the most part spend countless hours learning accepted “evidence based” techniques and refining their skills from such notable teachers as Frank Spear, Vince Kokich, Cherilyn Sheets, John Kois, Robert Winter, Pascal Magne, Jeff Morley, John Kanka, and the Faculty at the Pankey Institute. This list is only a small sampling of the quality sources that dentists who have an appetite for enhancing their functional and cosmetic knowledge can gain from. Moreover it is of interest to note that the author commented that “a smile analysis indeed revealed a very lovely appearance” and “there was no collapse in her vertical dimension.” In reading the statements I failed to recognize the scientific basis for which the smile analysis was based. Were any recognized smile analysis forms completed or was a subjective opinion given? As well, in deciding that there was “no collapse in her vertical dimension” were comparative cephalometric radiographs reviewed or again was this a subjective based opinion

The opposite of over-treatment is under-treatment or sometimes referred to in our profession as “supervised neglect.” It is interesting to see patients for the first time who have endodontic therapy with amalgam restorations on molar teeth. When full coverage crown treatment is recommended I am sometimes astounded to see that cotton pellets left in the chamber was the acceptable core material of the day. In addition posts in teeth without proper endodontic therapy or molar teeth patched with amalgam so many times makes a quilt look mono-tone does not serve the patient any benefit. These teeth often fracture in such a way as to make them non-restorable causing the patient far more financial hardship than the cost of the original single crown.

The mere suggestion that an intra-oral camera is derived to “frighten a patient into treatment” has obviously never had the pleasure of a colonoscopy. Pure and simple the intra-oral camera (which was developed from the medical industry) was developed to aid in detection, diagnosis and education. It has proven to be invaluable to assisting patients with insurance issues, as well as demonstrating and documenting existing conditions.

The theme that one should take away from this viewpoint is that over-treatment is over-treatment no matter what area of dentistry you are in and it is preposterous to suggest that all unethical dentists are synonymous with “cosmetic dentists.” I have had more patients than I care to count leave my practice because the treatment plan that was in their best interest was a capable orthodontist and post treatment whitening instead of ten veneers.

The public has overwhelmingly demanded cosmetic procedures in dentistry today. Instead of “vilifying” the dentists who are taking the many hours of continuing education so that they can provide the most current and accepted treatment to their patients, they should be complemented for their efforts. Many spend hundreds of hours and thousands of dollars for various accreditation degrees for the right to hold themselves as experts. In fact the University of Buffalo, Faculty of Dentistry has a two year full time certificate in cosmetic dentistry for those willing to invest the time.

I urge the author to investigate the demands of some of these programs and he may quickly realize they are a far cry from the one-day slide shows that many utilize solely as their continuing education. In addition, it will quickly become apparent just how sharp the line is.

Dr. Soll is editorial board member for cosmetic/esthetics for Oral Health. 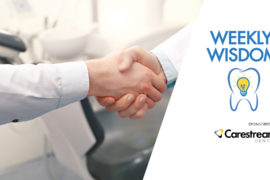