The edentulous mandible presents a treatment challenge that in the past was frequently resolved inadequately. Clinicians commonly heard the complaint that the lower denture was poor while the upper one was good.

Various treatment modalities were used to restore the compromised mandibular ridge. The simplest but seldom satisfactory approach was to extend the denture base to use of all available supporting tissues. If that approach did not get adequate results surgical methods were often used. These included procedures to increase vestibular depth, skin grafts with the assumption that the more heavily keratinized skin tissue would provide better support for the denture than the more delicate oral mucosa could and procedures designed to augment the deficient ridge. For the autogenous and alloplastic grafts were used with hydroxyapatite augmentation being the most common. The ultimate goal, regardless of the treatment modality chosen, was to restore the patient to a level of satisfactory function. Significant improvement in the long term was rare.

The skin graft vestibuloplasty is illustrated in figures 1 and 2, which show the panoramic x-ray and the 14-year post-surgical result of a case so treated. Hip skin was the donor site for this three-day hospital-stay procedure. Patient satisfaction was not increased by treatment.

Figure 3 is a panoramic x-ray view of an atrophic mandibular ridge augmented throughout the entire length of the alveolar process with hydroxyapatite through a subperiosteal tunnel. Figure 4 shows the 8 year post-surgical result. Clearly, it too, is less than satisfactory.

The root form endosseous implant has solved the problem of the unsatisfactory lower denture not resolved by the extensive surgery described above.1,2 However, the associated financial barriers to treatment are insurmountable by some. Lewis3 wrote, “Even implant-supported prostheses that are clinically effective have yet to be proven societally effective because they are inaccessible economically to some who need them.”

The need is significant. Extrapolating US figures to the Canadian population, it is likely that four million patients in Canada are fully edentulous. Most are seniors.

To put Lewis’s statement within the context of Canadian incomes a look at the range of fees for implant treatment of the edentulous mandible in Canada is revealing. The original Brnemark protocol consists of placing five implants interforaminally in a two surgery approach and attaching a fixed-retrievable prosthesis to them. Table 1 shows typical fees for this procedure.

The most recent Statistics Canada figures show that the average senior’s annual income in 1996 was $16,000.00. While the effectiveness of the fixed-retrievable prosthesis attached to five implants is unquestionable, access to this treatment by the average edentulous Canadian senior is. A year’s income barely covers the cost of what should be a basic service given its impact on the patients’ quality of life.

The challenge then is to lower treatment fees sufficiently to reach more of the dentally dysfunctional seniors without subsidizing treatment either by other private practice procedures or government agencies. Implant manufacturers, clinicians and dental technicians have collaborated over the years to meet this challenge. The common objective was to simplify treatment by reducing the number of steps and the number of components used in treatment while maintaining patient satisfaction levels.

The ultimate alternative appears to be the overdenture supported by two implants designed for one stage surgery using the smallest number of prosthetic components. Geertman6 has shown that the majority of the patients treated using this protocol reported improvement in quality of life, self-confidence, and acceptance of the prosthesis. The psychological impact of dental implants was positive. The levels of satisfaction compared favorably with the more complicated, two-surgery, numerous-component, fixed-retrievable prosthetic treatment. That is, a soft tissue borne, implant retained overdenture, provided the same level of satisfaction as a fully bone anchored, fixed/retrievable prosthesis.

Using a one-piece, one-surgery system, place two implants in the cuspid area following the manufacturer’s directions for use. Relieve the hard denture base over the implants to protect them from overload.

Allow a healing period suggested by the manufacturer (the shortest is with porous-coated implants-10 weeks), and make an overdenture in the usual way.

Process #6 O-rings into the denture base using implant/abutment analogs supplied by the manufacturer.

Figures 5 & 6 are recent images of the same patient illustrated in Figures 1 & 2, re-treated in April ’99 with a one-surgery, two-component (abutment cemented into the implant) system. Two number 6 O-rings were processed into the conventional overdenture base for retention. Table 2 shows the fees associated with this approach.

The fees for the simplified overdenture approach less than 25% of the fees for the fixed/ retrievable, fully bone-anchored prosthesis. The morbidity is far lower. The satisfaction levels are the same (Geertman6). Obviously, the simplified overdenture approach would be more appealing to many denture wearers, even if cost were not an issue. With the lower professional income potential can it be of interest to the dentist?

Seen in the context of Henry Ford’s philosophy of increasing production efficiency to allow a decrease in production costs to permit a lower selling price to increase sales volume, clearly, the answer is yes. The dentist needs to treat four cases at the $3,600.00 fee to equal the professional income potential of one $15,500.00 case. That is a ratio of 4 to 1. A casual survey of dental laboratories and private practice dentists doing both implants surgery and prosthetics shows ratios ranging from 20:1 to 33:1.

Since all implant systems experience occasional failures, some clinicians place three implants instead of two, for implant overdenture treatment. In this approach, one implant is placed in the midline and two in the area of the cuspids. This leaves two implants to support the overdenture, should one fail. These clinicians often reduce the fee for the third implant since it is placed in the same surgical procedure.

Figures 7 to 10 are recent images of the same patient illustrated in Figures 4 & 5, re-treated in August 2000 with a one-surgery, two-component (abutment cemented into the implant) system. Here the conventional overdenture base was relined with a self-curing elastomer for retention-another simple but effective technique.

To restate the challenge the profession faces we need to lower treatment fees sufficiently to reach more of the dentally dysfunctional seniors while maintaining patient satisfaction levels and professional income levels.

Over nearly three decades the ultimate alternative has evolved in the form of the overdenture supported by two implants designed for one-stage surgery using the smallest number of prosthetic components possible.

The profession is well on the way to meeting the challenge. OH

Tenax Dental Implant System implants were used in all cases illustrated in this article.

Dr. Somborac is in private practice and is a shareholder in Tenax Implant Inc. 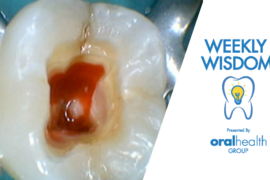