The immune system is not subject to senescence.

The oral bacteria of caries and periodontal disease can cause pneumonia in the elderly.

A.The first statement is true, the second is false.

B.The second statement is true, the first is false.

Both dental caries and periodontal disease present a microbial challenge to the host, causing an immune response. Senescence of the immune system occurs as part of the aging process. As a result, host microbial responses can differ between the young and the old. This is considered a predisposing factor responsible for an increase in respiratory infection in the elderly. One study has shown that xerostomia can predispose to aspiration pneumonia. A further study of elderly residents in chronic care facilities in Toronto showed that poor oral hygiene was a predisposing factor to pneumonia. Saliva makes an important contribution to oropharyngeal secretions and, therefore, the types of bacteria shed from teeth and the periodontium into the saliva can influence the type of inoculum that is aspirated into the lungs. Aspiration pneumonia is the third to fourth leading cause of death in the elderly. Therefore, oral health becomes very important in geriatric care.

1. will reduce the need for extraction.

2. will take advantage of the space of the primary second molar

4. may allow for a single phase treatment

Early orthodontic intervention is indicated for children with anterior and posterior crossbites, ankylosed teeth, diastemas, excessive protrusions, open bites, and Class III malocclusions with a true maxillary retrusion. With modern orthopaedic appliances, bone growth can be modified and treatment in the mixed dentition stage can be completed in approximately 80 per cent of cases without tooth extraction. The space of the primary second molar is maintained and assists in the process.

Early intervention should be avoided in patients whose mouth size, maturity level or pain threshold is insufficient to carry out treatment.

For a patient with an overdenture supported by osseointegrated implants, biomechanical success is increased by having

1. a bar system with high rigidity.

2. a bar system with low rigidity.

3. an overdenture design with functional flexibility.

4. an overdenture design with no functional flexibility.

A recent clinical investigation studying the biomechanical aspects of overdenture treatment of patients with osseointegrated implants revealed some important findings. Using strain gauges within the worn appliances, the experiments showed that there was a mechanical feedback between the alveolar bone, the neighbouring tissues, and the central nervous system in patients wearing the implant-supported prostheses. This feedback mechanism mirrors that which is experienced by patients wearing a tooth-supported overdenture.

In addition, the biomechanical success for overdenture patients having osseointegrated implants is maximized when

the number of implants is as large as possible.

the bar system, if used, has been designed with the highest possible rigidity.

the overdenture itself has been designed to allow some functional flexibility.

The longitudinal effectiveness of this form of prosthetic treatment of edentulous patients is reported by Zarb. In this study, patients were followed after treatment for 3-13 years. Implant-supported overdentures provided improved stability and increased comfort and security.

In forced eruption of a tooth with a shear fracture of the crown, extrusion should be

Horizontal and shear fractures of crowns of teeth are ideal candidates for forced eruption, so that a restoration edge can be moved from a subcrestal position of the alveolus into a supracrestal one. Such repositioning improves aesthetics and oral hygiene of the restoration. Carious destruction of the crown to involve the cervical third of the root is another indication for such care. When dealing with teeth which radiographically show narrow and tapered roots, the clinician should be aware of difficulties in obtaining a satisfactory esthetic result after extrusion, especially in the anterior maxilla.

Although at one time the extrusion of endodontically treated teeth was not considered, there is evidence to suggest that careful and slow orthodontic movement will result in satisfactory repositioning.

In all cases where forced eruption is being considered, it is important to take the patient’s smile line and periodontal status into consideration, as well as the patient’s time requirements for completion of treatment.

In forced eruption, extrusion should be slow (2-3 mm over 4-8 months) to protect pulp vitality and avoid root resorption. Movement should be combined with gingival fiberotomy, the most successful technique of which would appear to be that of Van der Linden. This is illustrated in Figure 1. In this technique, the surgical blade is directed to and kept at the centre of the alveolar bone crest during severing of the supracrestal fibres.

Answers to the July 2000 SLSA questions 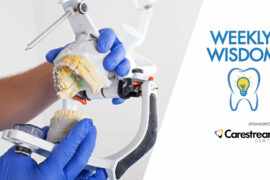