Re: “The Perils of Ignoring Scientific Method” and its related articles, Oral Health, January 2003

Dr. Titley writes about the “dilemma confronting the clinician when ‘white fillings’ are requested by the patient or parent and the issues of informed consent for clinicians who practice in an amalgam-free environment”. There seems to be a lack of consistency with respect to informed consent. Why it is fine to place amalgam in peoples’ mouths and not inform them it is made of 50% mercury and that mercury evaporates off the filling 24 hours a day. If anyone places only white fillings Dr. Matsui writes “he/she should be sure that he/she is complying with the standards of practice of the profession”. Health Canada in its August 21, 1996 position statement on dental amalgam states “dental amalgam is the single largest source of mercury exposure for average Canadians.”

Since mercury is the most toxic non-radioactive metal there is,1,2 why the double standard? If there is to be consistency and truth in our profession then all the information should be brought forward for the patient to decide. Does Dr. Titley tell his patients that Health Canada recommends that non-mercury materials should be considered for restoring the primary teeth of children when the mechanical properties of the materials are suitable?

Evidence-based research seems to be the catch-all phrase the past number of years, but does it mean anything different than our evaluation of research before the term was coined. People choose the research that supports the position they want to hold. There are always conflicting views and approaches to solving any problem, but how many investigate the evidence that another view is based on. This is seen in the amalgam issue, the handling of TMJ problems, and other areas as well. The “profession” has become more of a club where the more powerful, influential, or louder voice dominates and tries to suppress well-respected, well-meaning and well-informed individuals who disagree.

Whether “it works in my hands has no place in modern day clinical practice” as Dr. Titley states has questionable validity. We all know there is such a concept as the art of dentistry, and some have mastered the art better than others. Art does not refer to doing cosmetics but rather the skill of using a hand piece or hand instruments and the ability to manipulate the materials to produce a product that will benefit the oral health and/or general health of the patient. This relates to restorative dentistry as well as endodontics or surgery. Most dentists will evaluate a technique or material for their practice based on how it “feels” in their hands. If the evidence-based research says a technique is superior and the individual dentist does not feel comfortable with it or its results in “their hands” are they maintaining the standards of practice? The research may say a therapy works 70% of the time but how does that apply to the patient in the chair whose circumstances and history the clinician is intimately familiar with? The patient is not a statistic and does not want to be treated as such. They come to a practitioner to access their knowledge, experience and skill.

When new research reveals that there is a healthier more beneficial method or approach it is natural to be skeptical, but perhaps the history of our present methods should be questioned. Perhaps there has been a tradition passed from dentist to dentist without critique. Most people cannot be bothered to delve further into new ideas as it takes too much energy, so they brush it away as being absurd or inferior rather than a potential benefit to his/her patient.

Even though an experiment produces a result that based on statistical analysis seems to be beneficial, it does not make it scientific or logical. It must be reviewed for its merits. Evidence based research may indicate a therapy “works” because someone has tried it on a patient but it is up to the individual practitioner to decide if it fits into their philosophy as compared to a different approach which also produces results which may be a better fit. Dr. Applebaum in his editorial writes “many of us choose treatment options that ignore the “scientific method”–the long term proof of success.” He does not state which treatment options he is referring to although one must assume it is amalgam over composite since that is the theme of the whole article. It is quite unfortunate Dr. Applebaum does not note one reference thereby making his short piece an editorial and only that; his opinion. Stating his opinion does not give his reader anything to learn, which is contrary to the premise of his editorial that “during our practice years, we should be taking continuing education courses… this will allow us to critically evaluate new techniques and materials.”

Dr. McComb’s article states “Silver amalgam restorations are considered to be extremely safe” (that is why there has been a controversy over its use since its incorporation into dental practice 160 years ago.) “… and have gone through decades of refinement to produce an extremely stable, corrosion resistant and long lasting dental restoration.” It is taught in dental school 1) mercury evaporates off fillings every second of every day and that is why scrap amalgam (which is considered toxic waste) must be stored in an airtight container with a solution to absorb the vapours.3 It is not really as “extremely stable” as some people want us to believe. 2) One of the wonderful benefits of amalgam is that it is self sealing due to corrosion once it is in an aqueous environment (even the high copper formulations); another strike against being extremely stable. The corrosion of amalgam follows the basic laws of physics.

The dental professional must start to respect the varied opinions of their colleagues even if it is diametrically opposed to one’s own. We must start listening to the research and insights of others and perhaps then we will see that there are other methods. This does not dictate that you must agree or follow but rather RESPECT the fact that someone else has a basis in thought and action.

Dr. Charles Berman got up at the end of a presentation to some hundred dentists at the 16th Annual Meeting of the Academy of Osseointegration in Toronto, March 2001, introduced himself as one of the founders of the Academy and stated that the FDA (and by implication, Health Canada) should ban two surgery implants. There were no dissenting voices. In addition, a casual glance at any book dealing with the history of dentistry will show that we dentists are an ingenious lot. Many of the contraptions we dreamed up would make Rube Goldberg blush. With implant prosthetics as commonly practiced until recently, we reached a new high in complexity. Thankfully, with one-piece, one-surgery implants and rationalized prosthetics imitating natural tooth prosthetics, we are now getting away from exposing our patients to unneeded trauma, expense and high maintenance.

The article by Kurtzman and Schneider is a good example of the weaknesses mentioned above and shows none of the recent advances moving implantology into a common sense discipline. It belongs in a History of Dentistry column.

Re: How to Integrate Implant Dentistry in General Practice, Milan Somborac, Feb. 2003

It was with some satisfaction that I read Dr. Somborac’s article in Oral Health. With success rates at least as high as so-called “conventional” treatments and the advantage, in many cases, of no destruction of adjacent tooth structure it is indeed about time that implan
t therapy was offered as a viable alternative to our patients. As past president of the Ontario Academy of General Dentistry, I feel strongly that these procedures must not be confined to specialist practitioners. General practitioners are not only capable of providing quality implant therapy; they are the person that patients develop long- standing relationships with, making it more likely that required follow up and subsequent treatment will be completed.

Since I am now involved in both the surgical and prosthetic phases of implant therapy I can say without doubt that the benefits are many. My patients are more likely to proceed with appropriate treatment since they feel comfortable in my hands. Since I am restoring the patient, if the implant can not be placed in an area or angulation that can be restored to my satisfaction I know it at the time of surgery and I feel no obligation to continue and subject my patient to compromised occlusal forces or esthetics.

Without doubt, the most important factor in providing quality treatment is quality education. A weekend course or a couple of evenings over snacks doesn’t cut it. At this time our universities do not provide adequate undergraduate implant training either. I encourage all general practitioners to attend hands on, live patient courses. The satisfaction of being able to offer complete implant therapy in your office is not to be underestimated. Even if you decide that implant surgery is not for you, the knowledge you gain will benefit you and your patients every day. 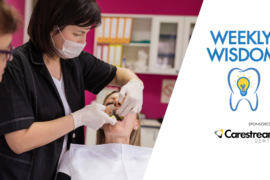