In Endodontics, a clinical examination and diagnostic imaging are both essential components before making a pre-operative diagnosis. The process of selecting a treatment option specifically of whether to extract or retain a tooth can often be complex. Conventional 2-dimensional imaging is still the most popular imaging modality in endodontics. However, the potential of periapical imaging is somewhat limited. Diagnostic information from the radiograph can often be difficult to interpret when the background pattern is complex. Goldman and colleagues (Goldman, 1972) showed that the agreement between six examiners was only 47% when evaluating periapical lesions using two dimensional radiographs. In a follow up study, when the examiners re-evaluated the same films at various times, they were only in agreement with their previous interpretations 19-80% of the time. (Goldman, 1974).

New imaging modalities have now become available in dentistry that can assist with some of the limitations of 2-dimensional imaging. In 2001, Cone Beam Volumetric Tomography (CBVT) was approved by the FDA for dental use. (Chogle, 2019) Numerous endodontic applications of CBVT technology have been described in the literature such as pre-operative assessment and treatment planning, assessment of internal and external resorption, pre-surgical assessment, dental anomalies, and treatment planning/assessment of traumatic injuries. For endodontic use, the small field of view (SFOV) imaging is the most accepted, as it is capable of providing images with sufficient special resolution with a lower radiation dose. With its accurate and high-quality 3-D representations of maxillofacial structures, CBVT technology offers tremendous improvements in diagnostic capabilities, eliminating surprises and minimizing the need for exploratory surgery. The result: more effective treatment and improved patient outcomes.

Ball et al. in 2013 discussed the application and advantages of intraoperative CBVT in endodontics. The authors concluded that in cases of increased difficulty or intraoperative complications such as complex anatomy, dystrophic calcifications, root resorptions, perforations, and root fractures, it is prudent to consider the use of CBVT with its inherent diagnostic value and limited radiation exposure. (Ball, 2013)

Rodriguez et al. in 2016 wanted to determine the influence of CBVT imaging on clinical decision-making choices amongst different specialists (prosthodontists, endodontists, oral surgeons, and periodontists) in endodontic treatment planning. Similar to Ee, 30 Endodontic cases with varying degrees of complexity were selected. Each case included clinical photographs, digital periapical
radiographs, and a small-volume CBVT scan. In the first evaluation, examiners were given all the information of each case, except the CBVT scan. Examiners were asked to select one of the proposed treatment alternatives and assess the difficulty of making a decision. One month later, the examiners reviewed randomly the same 30 cases with the additional information from the CBVT data. The authors concluded that CBCT imaging has a substantial impact on endodontic decision making among specialists, particularly in highly complex cases. (Rodriguez, 2017).

There is little doubt that the use of CBVT in endodontics overcomes many of the limitations of periapical radiography. The increased information provided by the CBVT should result in more accurate diagnosis and improved decision making for the management of complex endodontic problems. Patients will always be concerned about radiation; The effective radiation dose to patients when using limited FOV CBVT is higher than current 2-D radiography (Fayad, 2015). The benefit to the patient must therefore outweigh any potential risks of the additional radiation exposure, especially in children. The value of CBVT for endodontic diagnosis and treatment planning should be determined on an individual basis to assure that the benefit: risk assessment supports the use of CBVT. Dental colleagues should utilize the referral to endodontists as the specialty uses the latest in diagnostic imaging and techniques thereby ensuring that patients benefit from their diagnostic and treatment planning expertise.

In May 2015 an updated joint position statement of the American Association of Endodontists (AAE) and the American Academy of Oral and Maxillofacial Radiology (AAOMR) was published. The intent of the updated statement was to provide scientifically based guidance to clinicians regarding the use of CBVT in endodontic treatment and reflect new developments since the original 2010 statement. The next section of this article addresses some of the potential applications and recommendations for use of limited 1A. Preoperative radiograph with a clinical diagnosis (AAE Guidelines) of Previous Treatment/Chronic Apical Abscess. B. CBVT Images showing the radiolucent entity, and potential additional anatomy. C. Final and 18-month recall showing complete healing. D. Clinical photo showing 3 mesial canals obturated. FOV CBCT in different phases of treatment. (AAE/AAOMR, 2016)

Preoperative Anatomy Assessment
The success of endodontic treatment depends on the identification of all root canal systems so that they can be cleaned, shaped, and obturated. Recommendation #3 of the AAE/AAOMR position statement recommends CBVT for initial treatment of teeth with the potential for extra canals and suspected complex morphology, such as mandibular anterior teeth, and maxillary and mandibular premolars and molars, and dental anomalies. The superior ability of CBVT to accurately explore tooth anatomy and identify the prevalence of a second mesio-buccal canal (MB2) in maxillary molars when compared to the gold standard (clinical and histologic sectioning) has been well documented. (Santos Coelho, 2018).

CBVT showed higher mean values of specificity and sensitivity when compared to intraoral radiographic assessments in the detection of the MB2 canal. (Michetti, 2010)

The following is an example of using CBVT imaging for identification of complex tooth anatomy in a mandibular first molar. A patient presented with persistent pain on her first molar after initial root canal therapy had been performed 8 months prior by another endodontist. Her general dentist wanted a second opinion before condemning this tooth for extraction and replacement. The CBVT (Fig. 1) was suggestive of additional anatomy and could be a reason for the failed RCT. Probing was significant on the buccal aspect of the lower left first molar. Based on the findings of the CBVT scan, we decided to attempt orthograde retreatment. During the first appt, a middle mesial canal (MM) was found. All canals were cleaned/shaped, and medicated with Ca(OH)2 for one month. At the 2nd appt, the periodontal probing had improved, and all canals were obturated. The patient was completely asymptomatic 4 days after the first appt. A one-year recall PA shows the periapical radiolucency has healed. The first molar is asymptomatic, functional and the final crown had been cemented. Without the information from the CBVT, this tooth was likely headed for extraction and replacement which was premature in our opinion. 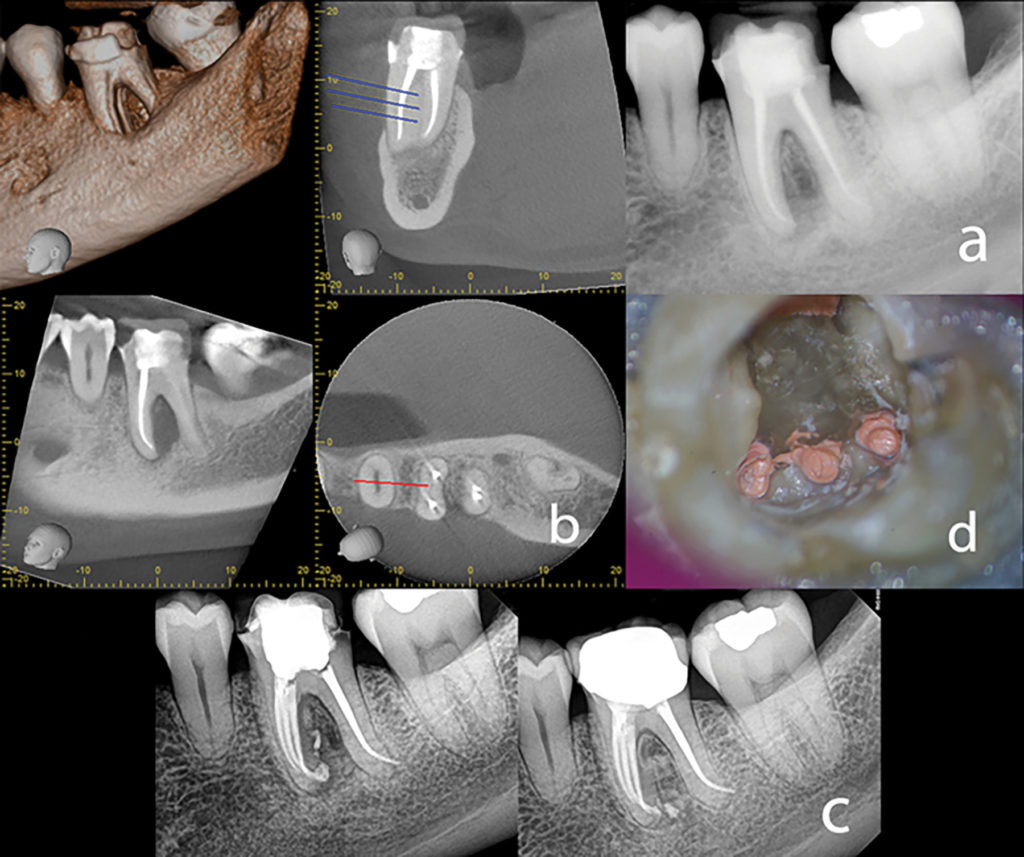 Another example of a clinical case where CBVT in our opinion changed the direction is seen in Fig. 2. A CBVT was taken mid treatment to identify the complex root anatomy. The axial scan clearly shows a radix root in the distolingual direction. 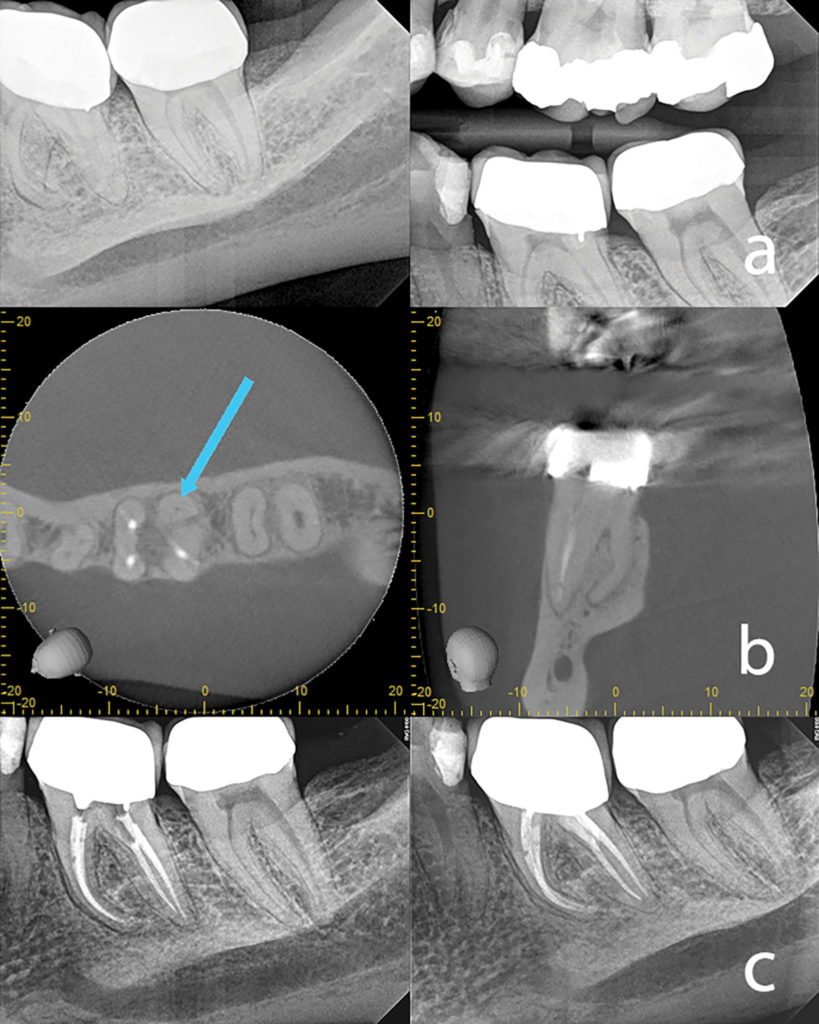 Troughing for another distal canal close to the DB canal could have caused a perforation or unnecessary root removal. If the case was completed without cleaning and shaping the radix root, post treatment disease was likely. After the mid treatment limited FOV CBVT scan, the radix root was located, and the treatment was completed. The preoperative periapical image did not allow for visualization of this complex root anatomy partly because the pulp chamber was calcified, and a fixed restoration was present. Clinical detection was also difficult without 3D imaging.

Recommendation #12 according to the AAE/AAOMR Statement states that limited FOV CBVT is the imaging modality of choice in the localization and differentiation of external and internal resorptive defects and the determination of appropriate treatment and prognosis is. (AAE/AAOMR, 2016). A female patient presented with symptoms when chewing and brushing her teeth. Inflammatory root resorption was suspected and therefore a limited FOV CBVT image was taken to determine the treatment and prognosis. A class 3 invasive cervical resorptive defect was clearly seen on the MB root of her upper first molar. Treatment planning concluded that if she wanted to save her tooth, initial root canal therapy followed by removal of the resorptive defect, and an associated restoration was needed. The patient accepted the endodontic treatment plan knowing the risks. Following root canal therapy, periodontal flap reflection and curettage, a topical application of 90% trichloracetic acid (TCA) was applied to the defect. The defect was then restored with a resin-ionomer restoration. Clinical images are shown (Fig. 3).

A similar case is also shown in Fig. 4. The lower mandibular premolar was treatment planned after analyzing the CBVT images. Both the endodontist and the patient agreed that root canal therapy followed by a resin-ionomer restoration had a good prognosis. Root canal therapy was performed followed by surgery to remove the resorptive defect. After a flap was raised, minor crown lengthening was performed, followed by application of TCA, and a resin-ionomer restoration (Heathersay protocol). The final peri-apical image is shown. The patient was sent back to the referring dentist for the final restoration.

Another guideline according to the AAE/AAOMR position statement is “Limited FOV CBVT should be the imaging modality of choice when evaluating the nonhealing of previous endodontic treatment to help determine the need for further treatment, such as nonsurgical, surgical or extraction. If surgical endodontics is indicated, the position statement further reiterates the recommendation for a CBVT by stating ‘Limited FOV CBCT’ should be considered as the imaging modality of choice for presurgical treatment planning to localize root apex/apices and to evaluate the proximity to adjacent anatomical structures.” Fig. 5 shows how CBVT was indicated and how it ties in both of those position statements.

The patient in Fig. 5 presented with discomfort but a desire to keep her natural dentition. A CBVT was indicated to treatment plan the molar in question. After an examination, a diagnosis of previous treatment/symptomatic apical periodontitis was made. CBVT for was used for planning and to evaluate her options. Amoxicillin was prescribed for one week. The CBVT shows a large lesion of endo origin present around the distal apex. In our opinion, endodontic surgery was a more conservative option based on the existing crown, cast post and core. Orthograde re-treatment could have been completed but would have necessitated removal of considerable tooth structure.

The patient elected for peri-apical surgery. The granulation tissue was removed, all three canals were retro prepped, and sealed with bio ceramic putty. Fig. 5C shows the 6-month recall which shows great healing. The patient was very happy with the result and she was able to keep her molar. CBVT technology was instrumental in treatment planning this case.

CBVT Technology should no longer be considered an ‘emerging technology’; It is a powerful tool which every endodontist should use. Simply stated, it changes treatment plans, and allows for a more predictable outcome especially in difficult cases. CBVT Technology that is here to stay.

Dr. Geoffrey Sas obtained his DDS from the University of Toronto in 2011 and his AEGD Certificate from the University of California, Los Angeles in 2012. In 2012 he enrolled in the endodontic graduate program at Nova Southeastern University and received his certificate in 2014. He received his diplomate status from the American Board of Endodontics in 2018. Currently, he is the president of the Ontario Society of Endodontics and the George Hare study club. He maintains a private practice limited to Endodontics and microsurgery in both Toronto and New York City . He can be reached at glsas@yhendo.com

To view the entire digital edition of the May 2020 Endodontics issue, please click here.