Dental implants and their associated restorations offer an effective and predictable treatment modality for replacing missing teeth.11,28,29,30 Reported success rates for dental implants are high, and are typically published within a range of 88.3 percent and 99 percent.43,53 However, there is still a scarcity of data in the published literature regarding follow-up of implants in function for at least five years or more.10,24,44 Despite the success of implant therapy, failures occur14 that can be classified as “early” (before the prosthetic phase of treatment) or late (after loading an osseointegrated implant).12 Factors that are related to implant failure can also be categorized into patient-related (systemic health, smoking, bone quality and quantity, oral hygiene, parafunction), implant characteristics (dimensions, coating, design), implant location and clinician experience.29,39,42 Occlusal trauma in conjunction with patient-related characteristics and bacterial-induced marginal bone loss (peri-implantitis) seem to be the major etiologic factors for late failures. Early failures are suspected to be related to clinician inexperience, excessive surgical trauma in the form of overheating bone, bacterial contamination, premature loading that exceeds Wolff’s Law, micromotion, and patient local as well as systemic characteristics.13 Early failures have been reported to vary between 1.5 percent and 21 percent, which is in fact quite significant and often not communicated to the patient.12,15,41,47,25 Early failures do not preclude the possibility of implant rehabilitation as the literature reports high success for re-implantation procedures that ranges from 71 to 100 percent.16 While replacement implants can serve as a predictable procedure with associated reasonable success rates, it is important to note that the success rates of replacement published in the literature are lower than the rates published for initial placement.17 In over 75 percent of patients who had failed implants, no known or suspected causes of failure were evident.27,2 Furthermore, within this group one can find a smaller subset of patients who have had multiple implant failures both from initial placement and re-implantation treatments. This phenomenon has been termed “clusterization”46,50,19,38 where a small group of patients account for the majority of lost implants. It begs clinicians to consider the role of genetic predisposition to implant failure where otherwise suitable candidates and sites area associated with failures where known or suspected clinical risk factors cannot be determined.6 Location of implant rehabilitation is also a significant factor in that almost three times as many implant losses are reported to have occurred in the maxilla than in the mandible.15

Implants undergoing early or late failure show progressive bone loss and can be readily diagnosed on radiographs. Clinically, signs of infection such as the presence of fistula in the soft tissue covering the implants, purulent discharge on exploration, bleeding, discoloration of marginal gingival tissue, and discomfort to probing at the implant site may also be present. If left untreated, bone loss typically continues and, with time, complete loss of osseointegration will occur. Although the number of studies and interest in general about the modalities of treatment is increasing in the literature.12,13 Only few clinical and in vivo studies exist that test the efficacy of the various proposed therapeutic approaches. The approach to treatment of ailing implants is often empirical and is an extension of modalities of treatment of periodontitis that occurs around the natural dentition. Many proposed treatment protocols are based on in vitro studies, or on case studies.5,49,37,26,34,21 The latter, as it is often forgotten, is a low level of proof when compared to prospective or randomized studies. It is clear that the goal of treatment is to leave the patient with a stable endosseous fixture(s) that can support and sustain function, where the peri-implant tissues are free of inflammation and demonstrates acceptable/desirable aesthetics. The goal can therefore be simplified as aiming to stop further bone loss and establish a healthy peri-implant soft tissue interface.7,33

There are several publications which offer “guidelines” on how to manage these types of cases.23,52,36,45 Of particular interest is the finding that failing implants can be successfully managed by a combination of mechanical debridement, antimicrobial therapy, and guided bone regeneration (GBR).3 GBR51,4 involves the placement of a barrier membrane to protect a developing blood clot within the bony defect, and to exclude invasion of the site with other tissues (epithelium, for example) that will impede osteoblasts from populating the site and regenerating the defect. Several barrier membranes and bone grafting materials have been used successfully in different animal and human studies to regenerate the lost bone around the osseointegrated implants.35 Some literature even supports the finding that “re-osseointegration” may occur around dental implants that have previously lost their intimate bone-to-titanium contact.

The decision to perform regenerative procedures is influenced, in part, by the degree of bone loss and morphology of the resultant defect. In a similar fashion to bone regeneration around natural dentition, it is critical to assess the number of “walls” of a bony defect which will ultimately support the membrane and bone graft material as well to allow the necessary cells to access the site and lead to regeneration. The most favourable bony defects that is amenable to bone regeneration is the craterlike defect. Grunder48,40 studies showed that the predictability for re-osseointegration depended on the anatomy of the defect, whereby craterlike defects were more successful than horizontal bone defects.21 The studies also showed that premature exposure and early removal of the membrane was associated with a lower success rate for the treatment procedure.49 Studies have also shown that use of particulate bone graft material along with GBR membranes show the best chances for success.32 A key feature of all treatment protocols is decontamination of the implant surface. Many studies have recommended the use of plastic instruments for both hand and ultrasonic debridement. The recommendation is made based on the theory that metallic or hard instruments may abrade the implant/abutment surfaces creating roughness that will favor plaque adhesion. This has been demonstrated in several in vitro investigations.8 It is important to note, however, that the surface of implants can also be abraded by the bristles of toothbrushes (ultrasoft)8,18 and that these debridement-produced abrasions have not yet been shown to increase the amount of plaque or mineralized deposits on implants or abutments in vivo.20 It appears that mechanical debridement in combination with systemic and local antimicrobial therapy have the greatest success in treating failing implants.1

A case report presented here illustrates the management of a late failing implant by mechanical debridement, antimicrobial therapy, and regeneration.

CASE REPORT
A 71-year-old female patient was referred in July of 2012 due to the presence of a suppurating 12mm pocket on the distal surface of implant #41 (Fig. 1). Teeth #31 and #41 were removed five years earlier and replaced with dental implants after six months of post-extraction healing. The restorations were cemented after osseointegration was confirmed 16 weeks following stage 1 implant surgery. The patient was healthy and a non-smoker, and she maintained good oral hygiene.

Clinical examination revealed that both implants were stable and did not demonstrate mobility. Threads of the implant were detectable by probing and with the tip of the explorer. Intraoral periapical radiograph revealed bone loss around both implants with approximately three threads exposed on the distal aspect of implant #31, and approximately 50 percent bone loss around implant #41 (Fig. 2). The bone loss along the facial and distal surfaces of implant #41 had involved tooth #42, a tooth without restorations or caries. Tooth #42 presented with mobility (M1) and did not respond to vitality testing. The probe was able to reach the apex of tooth #42 and the tooth was presumed non-vital due to extension of bone loss to the apex.

The management involved endodontic therapy on tooth #42 followed by raising a full thickness flap over the affected implants, mechanical debridement and decontamination of the implant surface with citric acid and chlorhexidine irrigation.

Combination antibiotic therapy (amoxicillin 500 mg with metronidazole 250 mg, three times daily) was started three days prior to the surgical procedure. The site was adequately anaesthetized and a full-thickness mucoperiosteal flaps were reflected. The infected granulation tissue was removed from the defect and the implant surfaces were thoroughly debrided using plastic curettes and a latch-angle titanium brush (Straumann® Dental Implant System, Straumann AG, Basel, Switzerland). Surface decontamination was performed by applying a supersaturated solution of citric acid for 30 seconds followed by complete rinsing of the site with normal saline. The site was then irrigated with 0.12 percent chlorhexidine over 60 seconds.

The patient continued with the combination antibiotic coverage for one week postoperatively and was also instructed to rinse twice daily with 0.12 percent chlorhexidine. The dressing and sutures were removed after 14 days. Regular recall was performed at her general dentist’s office once every three months.

At the end of the 12-month follow up, the healing was found to be complete; the implants were surrounded by healthy and firm mucosa without clinically detectable mobility of the implants or the adjacent tooth #42. Intraoral periapical radiograph showed complete resolution of the treated defects (Fig. 3), which may be due to regeneration of bone. The clinical and radiographic evidence fulfils the simplified aim of halting further bone loss and establish a healthy peri-implant soft tissue interface.7,33 It does not, however, prove true regeneration and reintegration of the implant surfaces that were exposed to the contaminated bony defects.

CONCLUSION
Mechanical debridement, antimicrobial therapy, and guided bone regeneration may serve as a viable modality to salvage and maintain the failing implant. Early detection and intervention seems important for success. The technique outlined here is an extension of techniques established in management of periodontitis and shows promise towards “reintegration” of implants. It appears that we know more about the risks of implant failures than the efficacy or various treatment protocols reported to date. Hence, practitioners should pay particular attention to reducing the known/suspected risk ­factors. OH

Disclosure
There are no financial interests in companies manufacturing or distributing products or services mentioned here.

Dr. Lenga is a periodontist who maintains a practice in Toronto that includes implant surgery.

4. B Lehmann, B. U. (1992). Treatment of an early implant failure according to the principles of guided tissue regeneration GTR. Clin Oral Implants Res, 42-8.

49. Weyant RJ, B. B. (1993). An assessment of survival rates and within-patient clustering of failures for endosseous oral implants. J Dent Res, 2-8. 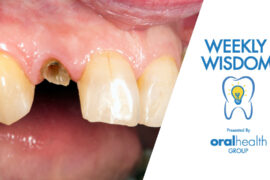