Abstract
Obstructive sleep apnea (OSA) is a common disorder that causes patients to temporarily stop or decrease their breathing repeatedly during sleep. OSA has been associated with increased morbidity and mortality rates as well as decreased quality-of-life. Certain patients with maxillomandibular abnormalities, such as mandibular retrognathia, suffer from moderate to severe OSA. Although continuous positive airway pressure (CPAP) is considered the first choice for treatment of OSAS in adults, maxillomandibular advancement can be considered as an alternative especially in cases of low compliance to CPAP, severe OSA, and maxillomandibular abnormalities. In this case report, we present the surgical management of an adult patient with severe OSA, mandibular retrognathism and low compliance to CPAP. After maxillomandibular advancement, the AHI considerably decreased, concomitant with an improvement of the patient’s esthetic profile and the CPAP therapy was stopped. Maxillomandibular advancement surgery can be a successful treatment modality for severe OSA in patients presenting a constricted upper airway passage due to anteroposterior maxillary and/or mandibular deficiencies without any contraindication for surgical interventions.

Introduction
Obstructive sleep apnea (OSA) is characterized by decreased airflow due to repetitive complete or partial obstruction of the upper airway followed by progressive increased respiratory effort to overcome the obstruction.1 The pathophysiology of OSA in adults is not fully understood and the etiology could be multifactorial.2,3 The obstruction could be due to one or a combination of the following factors:  relatively large soft tissues in the back of the throat (i.e. the tongue, adenoids and/or tonsils); relatively small bone structure surrounding the upper airway (e.g. retrognathic maxilla and/or mandible, small maxilla and/or mandible); or inadequate motor activity of the tongue and/or airway dilator muscles to prevent the upper airway from collapsing.2,3 OSA can be associated with clinical signs and symptoms that include snoring, excessive daytime sleepiness, fatigue, and impaired memory.1 OSA has been associated with decreased quality-of-life scores as well as increased morbidity and mortality rates.4 Polysomnography is commonly used to characterize the OSA severity in adults by measuring the apnea-hypopnea index (AHI), which is the number of events (apnea or hypopnea) per hour; scores of < 5 are normal, 5-15 mild, 15-30 moderate and > 30 are severe.4 A recent systematic review evaluated the prevalence of obstructive sleep apnea (OSA) in adults in the general population and how it varied between population sub-groups.5 For instance, it showed that the prevalence of mild OSA in the general population ranged from 9% to 38% and was higher in men. Moreover, it revealed that the prevalence of moderate-to-severe OSA ranged from 6% to 17% in the adult population.

Continuous positive airway pressure (CPAP) is considered the first choice as a treatment modality for OSAS in adults.1 However, it was found that 46-83% of OSA patients do not adhere to CPAP therapy (adherence defined as > four hours of nightly use).6 Alternative treatment modalities include oral appliances and surgeries to correct anatomic obstructions. One surgical modality is the maxillomandibular advancement (MMA) which involves surgical facial advancement by concomitant maxillary and mandibular osteotomies, and it is performed to enlarge the posterior airway space at multiple anatomic levels, including the nasopharynx, oropharynx, and hypopharynx.7 In general, MMA is indicated in cases presenting moderate to severe OSA, poor adherence to CPAP, craniofacial abnormalities, and the lack of medical history that contraindicates surgery.8 Indeed, a meta-analysis of 22 studies including 627 subjects with OSA concluded that MMA surgery is a highly effective treatment modality, particularly in patients with severe OSA and maxillomandibular abnormalities.9 The purpose of this case report is to present the changes in the AHI and the upper airway in a patient with severe OSA after treatment with MMA surgery and advancement genioplasty.

Case report
A 37-year-old male patient previously diagnosed with sleep apnea was referred to the Oral and Maxillofacial surgery department. His main complaints were snoring, fatigue, excessive daytime sleepiness. Additionally, he expressed dissatisfaction with his facial appearance. The history revealed that the patient had previously performed a complete polysomnographic evaluation which indicated a severe form of OSA with an AHI of 45. Moreover, the patient was previously treated with CPAP and mandibular advancement appliance intraoral appliance. The patient, however, mentioned that he was not able to tolerate the intraoral appliance and was not very complaint with the CPAP. Furthermore, the patient mentioned that he had a previous uvulopalatopharyngoplasty to correct a possible soft tissue obstruction, but it was ineffective in resolving his OSA symptoms.

After clinical and radiographic examination, it was found the patient presents with a skeletal class II profile due to a retrognathic small mandible. Following a discussion of the available treatment options with the patient, it was decided to perform maxillomandibular advancement surgery combined with genioplasty after completion of an initial pre-surgical orthodontic treatment to level and align the teeth. After completing the presurgical orthodontic treatment, a presurgical clinical and radiographic evaluation was performed at a specialized radiographic center (panoramic imaging, lateral cephalogram, cone beam computed tomography (CBCT)). The patient presented with an Angle Class II malocclusion, an overjet of 10 mm, an overbite of 20%, and a skeletal class II profile due to a retrognathic mandible (Fig. 1). Virtual surgical planning was then performed to determine the surgical steps and then fabricate the surgical guides accordingly. It was decided to perform a 4 mm maxillary advancement with a 1 mm global impaction (Lefort I one-piece maxillary osteotomy), an 11 mm mandibular advancement (bilateral sagittal split osteotomy), and an 8 mm advancement genioplasty (Fig. 2). Due to esthetic limitations, the maxilla in the current case report was only advanced by 4 mm, whereas the mandible was advanced by 12 mm. Nevertheless, postoperative CBCT images showed that there was a significant increase in the upper airway passage and polysomnographic evaluation revealed a significant decrease in the AHI from 45 to 8. 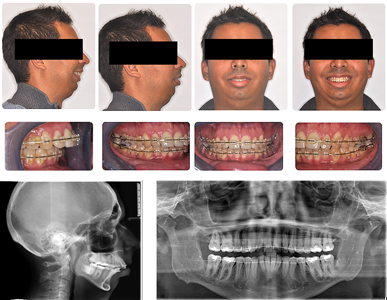 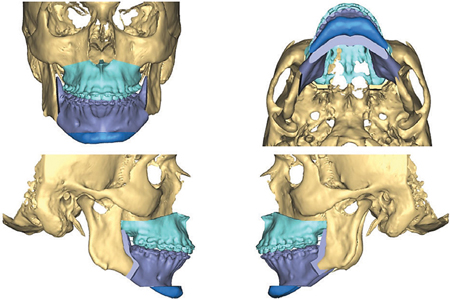 Following the planned surgical procedure and postoperative orthodontic treatment, the patient demonstrated an Angle I occlusion with a 2 mm overjet and 10% overbite, and a class I skeletal profile (Fig. 3). A 12-month post-treatment polysomnographic evaluation showed a significant decrease in the severity OSA with an AHI of 8. When the preoperative tomographic images were compared to the postoperative ones, there was an increase in the upper airway passage (Fig. 4). The patient indicated that there was a reduction in the daytime sleepiness, fatigue and snoring. Moreover, he was pleased with his new facial profile. 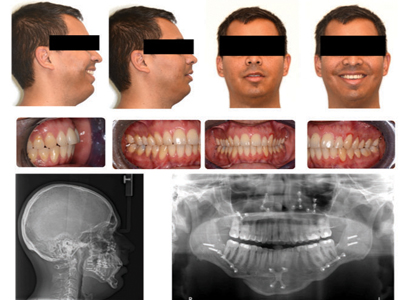 Evaluation after the surgical procedure and the completion of the postsurgical orthodontic treatment. Extraoral (first row) and intraoral pictures (second row), and radiographic evaluation (third row).

Discussion
CPAP therapy is considered the treatment of choice for treatment of OSA in adults.1 Despite the successful potential of CPAP, poor adherence by patients remains a significant problem.6 Surgical interventions are considered a viable treatment option for OSA especially in patients with moderate to severe OSA due to anatomical abnormalities including to anteroposterior maxillary and/or mandibular deficiencies (i.e. retrognathic maxilla and/or retrognathic mandible.1 It is proposed that for a surgical intervention to be considered a successful treatment for OSA, the post-operative AHI should be below.10

MMA surgeries have been investigated extensively in the literature and it is accepted as a successful therapy for patients with moderate to severe OSA8,9 and it was found that bone repositioning is stable over the long term.11 Moreover, it was previously reported that MMA surgery led to a significant reduction in the AHI in patients with severe OSA, from 49.33 ± 16.85 to 4.44 ± 5.76.12 It is suggested that a maxillomandibular advancement of approximately 10 mm increases the size of oropharynx both in the anteroposterior and laterolateral directions.9 When referring to the success of surgical interventions, another point to consider is the follow-up time. In the literature several previous studies only considered short follow-up times (three to six months);13,14 however, a systematic review published in 2011 revealed that the long-term follow-up of 56 patients for 43.7 months from three studies showed a surgical success rate of 89%.15 In our report, a 12-month post-surgical follow-up showed a stable polysomnographic score (in the mild OSA category) and with a relatively stable dentition and skeletal relationship.

Conclusion
After appropriate sleep apnea diagnosis and clinical and radiographic assessments, maxillomandibular advancement surgery can be a successful treatment modality for severe OSA in patients presenting a constricted upper airway passage due to anteroposterior maxillary and/or mandibular deficiencies without any contraindication for surgical interventions.

Acknowledgment: This report was prepared and presented as part of the requirements for the University of Toronto Faculty of Dentistry Clinical Conference Seminar Series PDE9094Y directed by Dr. S-G Gong.

Dr. Mohamed-Nur Abdallah is currently an Orthodontics and Dentofacial Orthopedics Resident the Faculty of Dentistry/University of Toronto. He obtained his dental degree from the University of Jordan (Jordan) in 2008. After working for approximately three years as a general dentist in Jordan and Cyprus, he joined McGill University where he earned his MSc in Dental Sciences (2013) and PhD in Craniofacial Health Sciences (2016) from McGill University.

RELATED ARTICLE: The Impact of Identifying Comorbid Conditions and Screening of Obstructive Sleep Apnea for Treatment of Temporomandibular Disorders