Introduction:
The Oral and Maxillofacial Surgery program at the University of Toronto supports the Cleft Lip Palate and Craniofacial Program at Holland Bloorview Kids Rehabilitation Hospital in numerous ways. The program’s director, residents and the Temporomandibular Joint and Orthognathic Surgery Fellows work collaboratively with staff orthodontist Dr James Noble and the chief of Dentistry, Dr. Robert Carmichael (prosthodontics). The combined orthodontic, prosthodontic and OMFS clinic manages some very complex cases with significant facial and dentoalveolar problems. We present a case of a patient with hemifacial microsomia that was treated from this clinic with a combined collaboration with Mount Sinai’s Centre for Temporomandibular Joint Surgery. 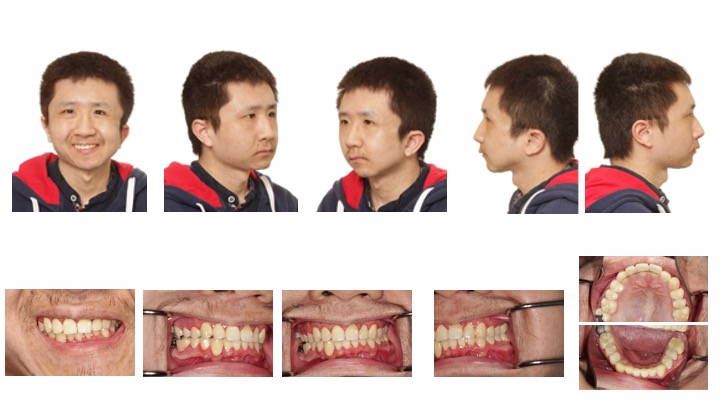 Case Summary:
A 23-year-old healthy male presented with a dentofacial deformity for orthognathic surgery evaluation. Upon examination, he presented with moderate facial asymmetry secondary to a left hemifacial microsomia. (Fig. 1) The upper and midface presented with good symmetry while the mandible was asymmetric and deviated to the left: the maxillary midline was shifted by 2 mm; and the mandibular midline was shifted another 4 mm (a total of 6 mm from the facial midline). (Fig. 2) The fixed orthodontic appliances were worn for 2 years prior to 4 level and normal alignment however they were removed due to concerns with oral hygiene as a result of the patients developmental delay. Orthodontically, the level and alignment required for orthognathic surgery was achieved in the hopes that post surgically, resumption of orthodontics mechanics would be possible. Preoperative panoramic radiograph presents with a left hypoplastic ramus, coronoid process and condyle due hemifacial microsomia Kaban type II. Cephalometric radiograph showed severe mandibular cant, an ineffective pogonion and convex profile. (Figs. 3 and 4)

A patient-specific extended – Total Temporomandibular joint Replacement (e-TJR) was designed to allow for reconstruction of the left TMJ. The surgery was carried out with digital virtual surgical planning and the fabrication and utilization of Clear Aligner Splints. (Fig. 5) These clear aligners orthognathic splints aided in circumventing challenges in performing orthodontic treatment without fixed braces in the perioperative phase. After the orthognathic portion, the occlusion was stabilized with elastics placed on Temporary Anchor Devices (TADS) in the alveolus. 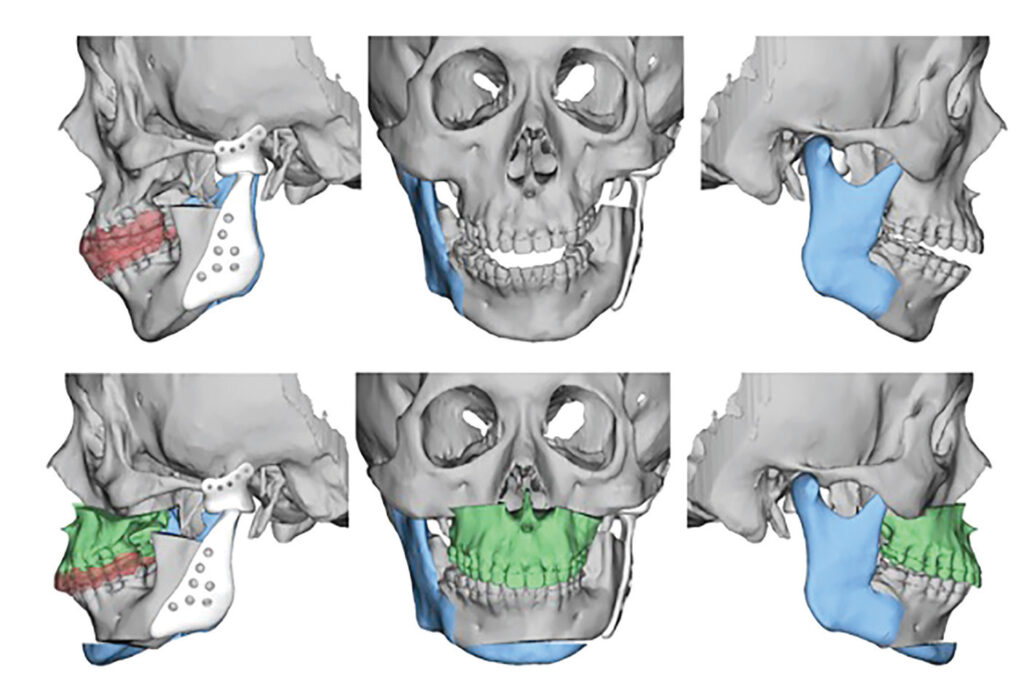 The planned surgery involved first replacing the deformed joint with a left e-TJR (Zimmer Biomet TM). Following this, orthognathic surgery was planned to correct the cant, the asymmetry and the poor horizontal projection of the lower face. This was planned with a Lefort osteotomy of the maxilla to correct the cant, a unilateral sagittal split osteotomy on the right side, and a genioplasty for advancement of the chin. The initial plan was to perform all these steps simultaneously; however, intraoperatively there was an unforeseen soft tissue arteriovenous malformation over the deep layer of the deep temporal fascia during the e-TJR resulting in heavy blood loss. (Fig. 6) It was elected to perform the orthognathic surgery at a later phase and 2 months later the planned orthognathic steps were performed without any complications. 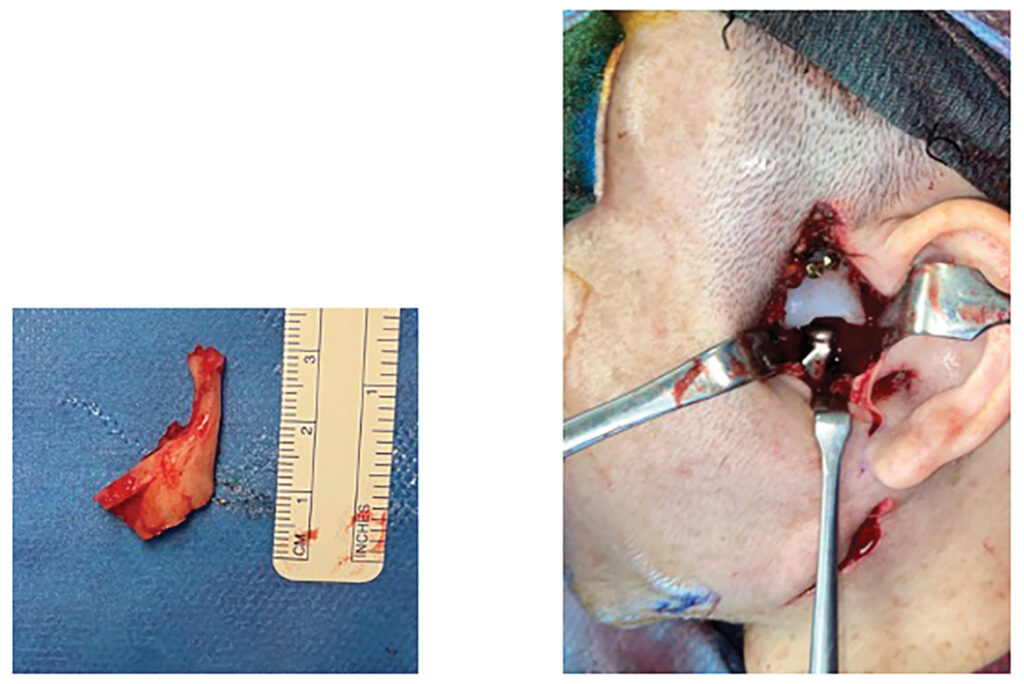 Intraoperative photo with resected diminutive condyle and demonstration of the preauricular and submandibular approach. Total extended temporomandibular joint in place.

Overall, the patient had an uneventful recovery with an excellent return of function and comfort. A postoperative 12-month follow-up showed good facial balance, stable occlusion, maximal mouth opening of 32 mm, and smooth functioning of the joint. (Figs. 7 and 8) Radiographically, panoramic and lateral cephalic imaging showed correction of the occlusal plane, improved profile and no evidence of condylar displacement. (Fig. 9) 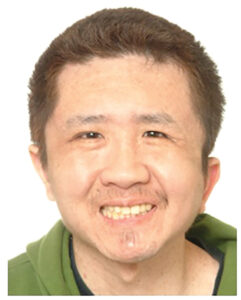 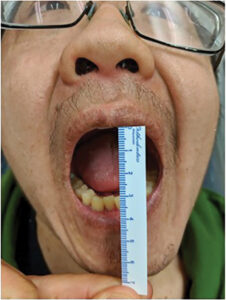 Discussion:
Hemifacial microsomia, also known as oculoauriculovertebral syndrome or otomandibular dysostosis, is the second most common facial birth defect after cleft lip and palate.1-3 It is characterized as an asymmetric and highly variable craniofacial malformation that can involve a combination of orbital, mandibular, otic, facial nerve and soft tissue anomalies. It is a craniofacial malformation characterized by hypoplasia of tissues embryologically originating from the first and second branchial arches. It mostly affects the ears, ramus of the mandible, masticatory muscles and TMJ (occasionally defects in facial nerve and orbits). It comprises a spectrum of severity and highly variable phenotypes.1,4

The etiology of hemifacial microsomia is most likely unknown and probably heterogeneous. One of the first theories postulated was that a vascular insult to the stapedial artery which is a branch of the hyoid artery occurs in utero. Hemorrhage in the developing first and second branchial arches may cause the underdevelopment of the derivative of these arches.7 A second theory postulates that there is an alteration in the migration of cells of the neural crest towards the formation of the trigeminal ganglion.7 The prevalence of hemifacial microsomia is estimated to be between 1 in 3500-5600 live births. Its most frequently an isolated facial asymmetry; it demonstrates a male predilection of 3:2; it typically is unilateral in 70% of the cases and in the few bilateral cases one side is usually more affected than the other. Interestingly the right side is more affected than the left side.2,4,5,7

The main features of hemifacial microsomia are outlined in Table 1. However further findings include underdevelopment of the skull. changes some eyelid changes include notches (coloboma) and/or dermoids. The external ear may be normal but most often is either underdeveloped or absent with or without the presence of skin tags. The most obvious facial finding is a vertically short face on the affected side. The affected cheekbone also does not grow properly.1,6 The greatest significant findings for maxillofacial surgeons is that the condyles are abnormal (in shape and or size) or diminutive or sometimes absent on the affected side. This brings about a significant occlusal cant to both the maxilla and mandible.8,9 Intraorally these patients present with significant malocclusions generally proportional to the skeletal discrepancy. Typically, the side that affected has crowding with inclination of the anterior teeth toward the affected side and a unilateral crossbite. Sometimes the teeth on the affected size are hypoplastic and of delayed development. About 25% of cases have congenitally missing teeth on the affected side.10

Treatment of hemifacial microsomia involves a multidisciplinary team to approach. The execution of these treatments is suggested in Table 2. This requires structured coordination between restoring dentist, orthodontist, prosthodontist, and other medical specialties including otolaryngology, and plastic surgery.6 From an Oral and maxillofacial surgical standpoint, it is the reconstruction of the temporomandibular joint and correction of the maxilla and mandibular deformities that requires attention and has been a progressive historical improvement in our abilities to help these patients. Original treatment involved costochondral grafts to recreate the condyle-ramus unit. This surgery involves harvesting a patient’s rib, along with it’s cartilaginous cap, and subsequent rigid fixation of the rib to the patient’s native mandible. Proponents of this treatment suggest that the rib graft has the potential to grow in conjunction with the patient’s skeletal development. Disadvantages of this treatment include unpredictable growth pattern of the costochondral graft, propensity for ankylosis as well as donor-site morbidity (which may include potential pneumothorax during procurement of the graft) and this has generally fallen out of favor with the advent of prosthetic joints.11,12

Contemporary treatment of hemifacial microsomia is predictably achieved with prosthetic total joint replacement. This modality, which has been at the core of the Centre for Temporomandibular Joint Replacement at Mount Sinai Hospital, has allowed us exquisite and detailed reproduction and return to function for hundreds of patients.13,14 The ability to recreate functional anatomy has been reliably achieved with fabrication of both stock, and patient-specific Temporomandibular Joint Replacements (TJRs). The device consists of a condyle-ramus unit fabricated from a Cobalt-Chromium-Molybdenum alloy condylar head and a titanium ramus component. The glenoid fossa is reconstructed using an ultra-high molecular weight polyethylene (UHMWPE) prosthesis. Currently, the TJR prostheses are fabricated by two major companies in North America; TMJ Concepts and Zimmer Biomet. Studies indicate the long-term stability of these prosthetic joints to be greater than 20 years.14 Furthermore, the use of digital planning and custom splint fabrication using CAD/CAM including the use of clear aligner orthognathic splints15 has provided over the last decade of development accurate, efficient and simplified surgical procedures with improved outcomes compared to traditional analogue methods.10,16,17

Utilization of patient-specific, custom-fabricated TJRs has enhanced the ability of oral and maxillofacial surgeons to correct the functional and cosmetic disturbances associated with hemifacial microsomia. This case presents but a step in the long-term dental, orthodontic, surgical and prosthetic care of the many complex cases seen at Holland Bloorview Kids Rehabilitation Hospital.

Acknowledgement: Our gratitude and thanks extend to Dr. James Noble who tackled this very challenging case and whose commitment and care to these patients is exemplary.
Manuscript submitted to Oral Health, November 26th, 2020.