Abstract
A new class of anticoagulants known as ‘NOACs’ (novel or non vitamin K antagonist Oral Anti Coagulants are replacing the more traditional Vitamin K inhibitors – coumadin (warfarin). Other names given to these drugs include direct oral anticoagulants or “DOACs”. These drugs have the same basic effect to reduce the likelihood of clot and subsequent embolus formation in those susceptible patients. The more common conditions requiring these medications include atrial fibrillation and venous thromboembolism (VTE) prophylaxis and management. VTE includes deep vein thrombosis (DVT) and pulmonary emboli (PE). We have become comfortable managing patients on warfarin, performing minor surgical procedures and not needing to interfere with their anticoagulation for the most part.1 As our patients may be transitioned over to these NOACs, we need to consider the risk of bleeding if minor oral surgery such as extractions and periodontal surgery are performed.

Introduction and Rationale for Anticoagulation
A number of medical conditions predispose individuals to forming blood clots which can become emboli and travel to become lodged in small vessels that can lead to life threatening conditions. An example is the person who experiences deep vein thrombosis (veins in the lower leg being classic for this) and if one of those thrombi breaks free to become an embolus it can go to the lung and if large enough can form a fatal pulmonary embolism. The other very common condition is atrial fibrillation. It is a common occurrence, happening in about nine percent of the population over 65 years of age in the USA.2 When the atrium is fibrillating it is not moving blood effectively to the ventricle. It is ‘quivering’ or ‘vibrating’ in such a way that makes an ideal environment for blood to begin its clotting process. If small clots form and get passed on through the ventricles they become emboli and are passed to the general systemic circulation where they can occlude a vessel supplying any organ including the brain leading to a vaso-occlusive stroke. (This would be in contrast to a hemorrhagic stroke from a bleed in the brain.) Obviously any organ is at risk of having part of its blood supply occluded including the coronary circulation. As the population ages this disorder is expected to increase significantly over the next 15 years.2

We can think about the normal physiologic hemostatic process to understand where the likelihood of thrombus formation can be reduced.

The various components involved in normal hemostasis are schematically depicted in Figure 1. Anti-platelet medications are prevalent and there are currently three classes of such drugs, of which ASA and clopidogrel represent two of the more common classes used. These are used obviously to prevent platelet plug formation (known as primary hemostasis). Once platelets have aggregated then a clot or ‘thrombus’ can form.

The other means of attack of this problem is through anticoagulation or prevention of clot formation. Figure 2 highlights the coagulation cascade and the various factors involved. The well-known anticoagulant warfarin (coumadin) was first introduced to medicine in the 1950s4 and has been the standard medication used for these conditions since that time and until recently has not had comparative competetive agents for the same purpose. Warfarin has its effect by inhibiting the Vitamin K dependent factors (II, IX, X and VII). Warfarin has some distinct disadvantages to its use. It has a long half life so it takes some time to be effective from the onset of administration and a long time to be eliminated from the body (as in days) to have normal hemostasis once it is stopped. Its effectiveness is measured by serum INR values. For many patients INR values can vary substantially although the dose of the drug is constant. Therefore, monthly blood work for INR assessment is necessary to follow warfarinized patients. This not only poses an inconvenience but also a cost to the health care system. 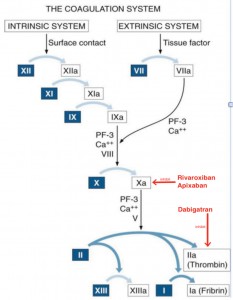 What are the risks of these anticoagulants and anti platelet drugs?
The main risk of using these drugs obviously is bleeding. Figure 3 shows two different patients that reported in their history that they were on “blood thinners”. Both images are following minor oral surgery where their anticoagulants had not been stopped. Neither had excessive bleeding during or following surgery but these hematomas are impressive. The sublingual one poses a potential airway risk and needs to be considered a possible reason to interfere with anticoagulant medication if floor of mouth surgery is entertained. Spontaneous bleeding such as GI bleeds and intracranial bleeds, are two of the more common and concerning bleeds that can occur. There is also a risk of excessive surgical bleeding especially in the face of someone requiring urgent surgery. When this occurs, it is beneficial to be able to reverse these drugs and that capability exists for warfarin. Vitamin K is used as a reversal agent for warfarin since it is the vitamin K dependant factors that have been affected. Until recently, the NOACs (which we are about to discuss) did not have reversal agents and that poses a distinct disadvantage for them. This has been of particular concern when trauma surgeons learn of a patient’s medication regime, including a NOAC when urgent surgery is required, particularly if it involves neurosurgery. This can potentially delay surgery that could be considered time sensitive and life-threatening if delayed. 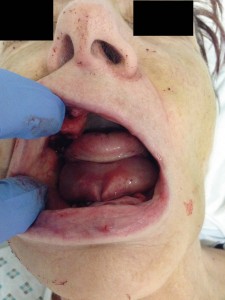 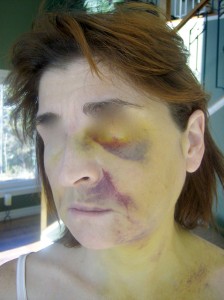 The NOACS
These newer classes of drugs are two in number. They are the direct thrombin inhibitors and the Factor Xa inhibitors. This is the first time the coagulation pathway has been accessed using anything but inhibition of vitamin K dependant factors. Dabigitran (Pradax, Pradaxa) represents the Direct Thrombin Inhibitor class whereas Rivaroxaban (Xarelto) and Apixaban (Eliquis) represent the Factor Xa Inhibitors. The characterists of these drugs can be reviewed in Table 1. 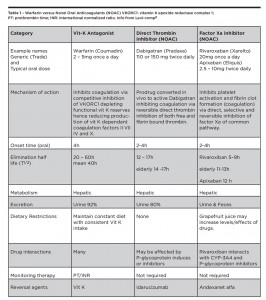 These drugs are given once daily on a fixed dose and no monitoring of anticoagulation status is required. Large trials initially were done to support the use of NOACs over warfarin although there has been question about their relative safety.6,7 In summary these agents are at least as effective in clot prevention with lower risk profile in causing bleeding, especially intra cranial bleeds. This coupled with the convenience of once daily fixed dosing and no need for monitoring is pushing them to the forefront of primary therapy in anticoagulation. Further prospective trails will likely define and clarify their efficacy and safety levels.

Because of the inherent risk of bleeding, whenever these drugs are used to prevent clot formation, a risk-benefit assessment needs to be made with respect to the prescribing clinician being comfortable that the risk of bleeding does not outweigh the benefit of clot prevention.

In general, routine dental restorative work requiring local anesthesia including blocks and subgingival clamps should be carried out without any need to alter antiplatelet or anticoagulants. With respect to oral surgery procedures including dental extractions and periodontal surgery antiplatelet medication should not be stopped and maximizing local hemostatic measures including local pressure, appropriate sutures, gelfoam, surgicel, bonewax, electrocautery and 4.8 percent tranexamic oral rinse should be utilized. Dental extractions are considered low risk for two-day major bleed post op ( 0 – 2%). Thus any patient that has a high or very high thrombotic risk (mechanical heart valve, A-fib with CHADS2 score of 3 – 6, or VTE in past 3 – 12 months must not be taken off of their anticoagulant.9,10,11 If the procedure is larger (i.e. full mouth clearance) and you feel the patient is at significant risk of bleeding it is best to split the procedure up into multiple smaller procedures (i.e. one quadrant at a time) and maximize local hemostatic measures. If the patient is only at moderate thrombotic risk most procedures can still be carried out without discontinuation of the anticoagulant. If, however, the procedure is larger (i.e. multiple extractions) consideration can be made in consultation with the prescribing physcian to briefly discontinue the NOAC perioperatively. Discontinuation of Warfarin briefly perioperatively is of little help as the half life is so long that takes four to six days to normalize hemostasis and should not be done for dental extractions. Assuming normal renal function, the NOACs’ anticoagulation effects are considered to have fully resolved after five half lives have elapsed. Thus, for the NOACs in Table 1, holding the medication the day before and the day of the procedure, and restarting the NOAC on post-op day one is possible. Once again this is often not necessary as local measures are often enough and when this is considered, it should only be done in consultation with the NOAC prescribing physcian to weigh the risks and benefits.9,10,11
What if the patient is bleeding post op in my chair.

Most post-op bleeds can be managed in the usual fashion with good light and suctioning to identify the source and deal with it using the above mentioned local hemostatic measures. However, if there is ongoing bleeding that is not responding to your efforts or there is concern that the patient has lost too much volume (low blood pressure, increased heart rate, altered level of consciousness and decreased urine output), an urgent phone call is needed to your local oral and maxillofacial surgeon with consideration for management of the patient at the nearest emergency department. In this setting, appropriate supportive care can be administered. This includes discontinuation of antiplatelets and anticoagulants, and IV access where fluids and blood products can be administered based on lab results (CBC, Creatinine, liver function tests). There are currently no reliable laboratory monitors universally available to monitor a patient’s level of anticoagulation with NOACs. Activated Partial Thromboplastin Time (aPTT) is often elevated and a normal reading is reassuring that the anticoagulant effect of the NOAC has resolved. But if the patient is still bleeding, it must be presumed that they are still anticoagulated. Other tests such as the dilute Thrombin Time (TT) and antifactor Xa exist, however, the local lab must be calibrated to the NOACs and most currently are not. Dabigitran can be cleared by hemodialysis, however the factor Xa inhibitors are highly protein bound and this is ineffective. Other approaches currently used include oral activated charcoal to increase removal from GI tract and IV antifibrinolytics such as Tranexamic Acid. 9,10,11

NOAC Reversal Agents8
Reversal agents such as Idarucizumab and Andexanet alfa are currently not available in Canada, however, they are expected to be availabe in the upcoming months. Prothrombin complex concentrate (PCC) is another option that can be used and is curently available in Canada but should not be combined with a reversal agent. These medications are rarely used and reserved for cases with persistent life threatening bleeds where death or permanent disability is highly likely unless something is done. This is because they are thought to not only reverse the anticoagulation but also be prothrombotic and their benefit has not yet been defined in the literature.10

No controlled studies exist yet in the dental literature to guide our perioperative management so until then, we will have to extrapolate from warfarin studies.12,13,14 OH