Marijuana: What Dentists Need to Know

The Cannabis plant, commonly known as marijuana, is the most commonly used illicit drug worldwide, with roughly 35 million people using marijuana each month in the United States. 1 Other than alcohol, cannabis is the most commonly used drug in the United States. Data from the National Institute on Alcohol Abuse and Alcoholism 2012-2013 National Epidemiologic survey estimated that just under 10% of the U.S. adult population reported using marijuana at least once in 2011. 2 The Centers for Disease Control (CDC) estimated that roughly 20% of the U.S. adult population reported using tobacco products either every day or some days each month in 2012. 3

In Canada cannabis became legal in October 2018, causing the country to take a closer look at the use and abuse of the drug. According to a 2012 report from Statistics Canada, 12.2% of the population had used marijuana in the last 12 months. A smaller 1.3% were considered to have a “use disorder”. Age plays an interesting factor in Canada, with the 25-44 age group most commonly using marijuana, followed by 45-64 and then 15-24. With legalization comes new legislation, including new rules for driving high. Approximately 14% of Canadian cannabis users with a license have driven within two hours of using the drug. Canadians can face anything from fines to driver’s license suspension to imprisonment depending on the charges and number of offenses.

Marijuana Legalization
Marijuana is currently classified as a schedule 1 drug – meaning the drug has no therapeutic benefit and has a high potential for abuse. Marijuana is now legal for medicinal purposes in 33 states. Furthermore, California, Colorado, Oregon, Washington, and several other states have legalized recreational use of marijuana, see Figure 1 below. 4 There is an active movement advocating for federal legalization of recreational marijuana and for rescheduling marijuana’s drug classification. 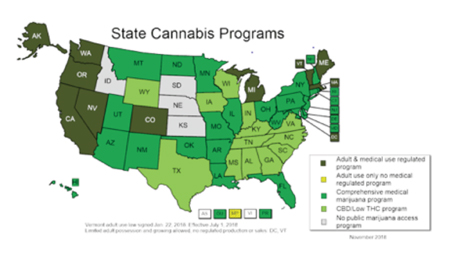 According to a Yahoo/Marist poll, “Weed and the American Family” 83% of Americans support medicinal marijuana legalization, while only 49% support recreational legalization. 5 Even with a divided sentiment regarding recreational marijuana legalization, Cannabis is penetrating into American mainstream life. As marijuana use becomes normalized for the average patient, dentists must lead the discussion regarding marijuana use and oral health. It is imperative to understand how marijuana affects our patients’ oral and general health.

Marijuana Overview
The Cannabis plant has hundreds of constituents, termed phytocannabinoids, that are released when the plant is heated. 9-delta-tetrahydrocannabinol (THC) and cannabidiol (CBD) are the most commonly researched active constituents of the Cannabis plant. THC is responsible for the psychotropic effects of marijuana, while CBD is a non-psychoactive constituent and hailed as the source of marijuana’s therapeutic benefits. 6

There are multiple routes of marijuana consumption; including, inhalation, ingestion, topical application, and sublingual administration. Most marijuana users continue to inhale the drug via pipe smoking, water pipe (“bong”) smoking, cigarette (“joint”) smoking, or via vaporizing (“cannavaping”). Cannabis edibles are also commonly marketed in states with recreational marijuana access. Sublingual products are currently available in Europe, but not in the United States. Traditionally, most marijuana users continue to smoke the drug for an immediate, effective “high” that will taper off relatively quickly compared to the low and slow effect from an edible.

Oral Health Impact from Marijuana
The evidence regarding marijuana use and oral health is limited. The current literature regarding oral pathology, dental caries, and periodontal disease among Cannabis users are mostly restricted to in vitro, in vivo, and retrospective datasets. Furthermore, retrospective analyses among marijuana users often find it hard to control for common confounding variables including; concurrent tobacco and/or alcohol use, poor oral hygiene, and lack of access to dental care.

Caries rates among Cannabis users are high, unsurprisingly. 12,13 The phenomenon of the “munchies” after using marijuana is no fable. THC is an appetite stimulant, but it also causes dopamine release; therefore, cravings spike after using marijuana and any food ingested is perceived to be more pleasurable. This positive feedback mechanism promotes Cannabis users to eat while using, and commonly users are seeking carbohydrate rich snacks. This craving for salty or sweet treats combined with potentially low motivation for diligent oral hygiene, promotes higher caries risk among marijuana users.

Considerations for Dentists
Many patients may not be forthcoming about their marijuana habits, but Cannabis conversations should become part of all dental practices. If dentists feel comfortable discussing marijuana use and its various health implications, we can appropriately counsel our patients, prevent disease, and promote health.

A question regarding marijuana use should be included on all medical health history forms. If patients answer ‘yes’ to marijuana use, follow-up questions regarding route of administration (i.e. smoking versus edible) and frequency of use (i.e. social versus daily) should certainly be included. Clinical signs of marijuana use, include; supragingival resin deposits/staining, xerostomia, an otherwise unaccounted for increased caries rate, and/or developing or worsening periodontitis without the presence of usual periodontal etiologic factors. If you find evidence suggesting a patient may be using marijuana but along they did not report marijuana use on their medical health history, follow-up probing questions can be used to investigate a patient’s current habits.

I make it a habit to encourage patients to feel comfortable about sharing information regarding their medicinal or recreational marijuana intake. I then focus on three specific things they can to do to improve their oral health. These recommendations typically include a combination of the following:

Editor’s Note
Dr. Caroline DeVincenzi will be discussing the oral health implications of marijuana use in more detail at this year’s Midwinter Meeting, hosted by the Chicago Dental Society (CDS), February 21-23 in Chicago.

The course, titled, “Green Dentistry: What You Need to Know About Cannabis and Oral Health,” will give you:

1. A history of marijuana in the United States along with information regarding the Cannabis plant itself and Cannabis Use Disorder,
2. A brief review of Cannabis pharmacology, including interactions between marijuana use and local anesthetics,
3. A review of marijuana’s general health effects,
4. A detailed analysis of what we know regarding marijuana use and its association with oral cancer, periodontal disease, xerostomia, and dental caries, and
5. Recommendations on how to manage marijuana using patients in your practice.

More information on the Midwinter Meeting can be found at https://www.cds.org/meetings-events/midwinter-meeting.

Dr. Caroline DeVincenzi is a Doctor of Dental Medicine, and currently completing a master’s degree in Periodontology at the Oregon Health Sciences University School of Dentistry. She received her DMD degree from OHSU in 2016.

Dr. DeVincenzi will be teaching a course for dental professionals at the Chicago Dental Society’s annual Midwinter Meeting on the topic of marijuana and dentistry, titled, “Green Dentistry: What you Need to Know About Cannabis and Oral Health.” She is also an active member of the American Dental Association, Oregon Dental Association, American Academy of Periodontology, and the Western Society of Periodontology.