Diagnosis
Class III malocclusions are associated with discrepancies in the sagittal relationship of the maxilla and the mandible, involving: 1) retrognathic and/or small maxilla; 2) prognathic and/or large mandible; 3) combination of both jaws.8-10 The accompanying incisal relationship may range from reduced overjet or edge-to-edge relationship to negative overjet, depending on the severity of the underlying skeletal pattern. Cases with negative overjet should be assessed for the presence of a functional shift, where the anterior positioning of the mandible may be due to occlusal interferences that force it forward on closure. This clinical presentation is often known as a “pseudo Class III malocclusion”, where patients present with a harmonious facial profile and Class I relationship in centric relation (CR) but a prognathic profile and Class III relationship in centric occlusion (CO).8 Class III malocclusions may also concurrently present with deviations in the vertical dimension, such as hyperdivergent and hypodivergent facial types with steep and flat occlusal planes, respectively.11 Discrepancies in the transverse dimension can present as dental and facial asymmetries, particularly in cases with mandibular prognathism.1 The significant clinical qualifiers for diagnostic considerations of non-surgical compensatory treatment are:

Growth
Most patients exhibit increased horizontal mandibular growth relative to maxillary growth during puberty. While this is generally helpful for Class II correction, this growth pattern is problematic for Class III corrections. Patients’ buccal occlusion12,13, overjet, midlines, cervical vertebral maturation (CVM)14 and height should be monitored yearly until it is clear that pubertal growth changes are mostly complete.

Face and Skeleton
The patient should have acceptable facial proportions.15 Furthermore, the skeletal pattern should be mild enough that compensation of the incisors could be achieved without violation of the alveolar housings while maintaining angulations that may typically exist in nature (Fig. 1).16,17 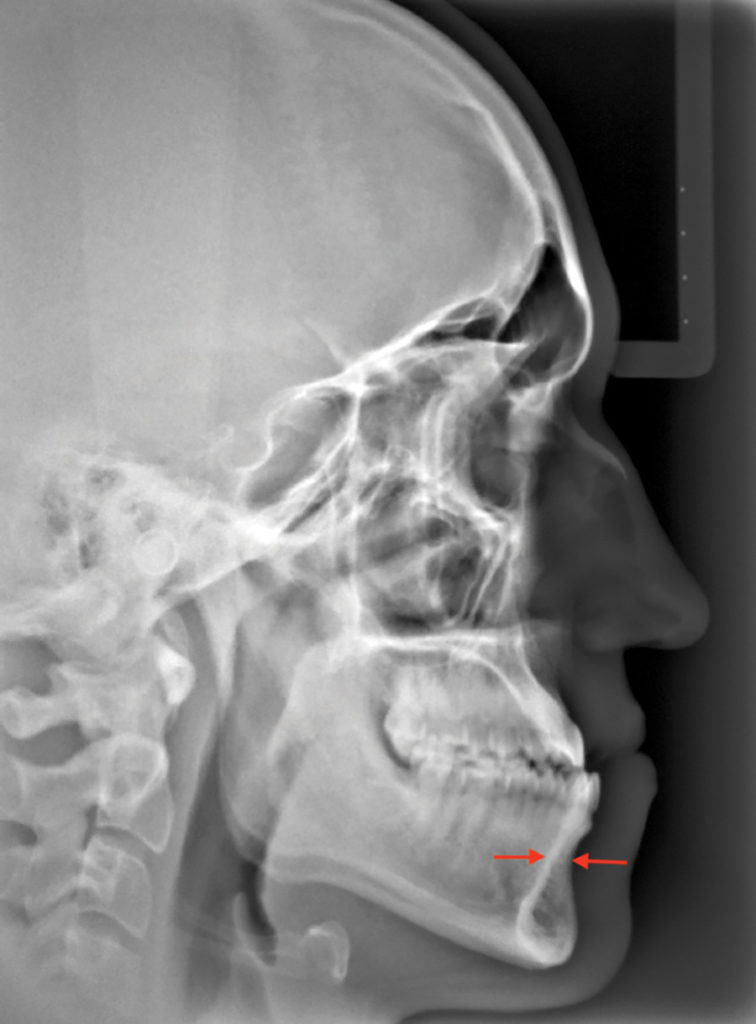 Camouflage Treatment Strategies
In patients with non-developing Class III malocclusions of mild to moderate skeletal discrepancy, non-surgical compensation can be achieved with orthodontic tooth movement alone. The three primary treatment strategies are:
1. Maxillary Arch Advancement – This can be achieved by a variety of protraction mechanics, with the most common options being Class III elastics and reverse-pull headgear traction.
2. Mandibular Arch Retraction – This may involve lower arch extractions and/or class III elastics.
3. Increasing Vertical Dimension – Indicated in cases requiring posterior extrusion and mandibular clockwise rotation. Can be achieved by anterior bite planes, vertical elastics and extrusive “base arches”.18

The above three strategies may of course be applied individually, or in concert, as is appropriate for each specific situation.

Case 1
The patient was a 13.5-year-old female with a desire to address her negative overjet. She presented with a 4-5 mm Class III at the level of the bicuspids with a 4 mm negative overjet. The upper arch was moderately crowded, and the lower arch had mild spacing (Fig. 2). There were obvious signs of over-closure in the vertical dimension when evaluated in centric occlusion. Additionally, she was missing all first molars and tooth 3.7. The patient’s family was insistent that her case be managed without orthognathic surgery. 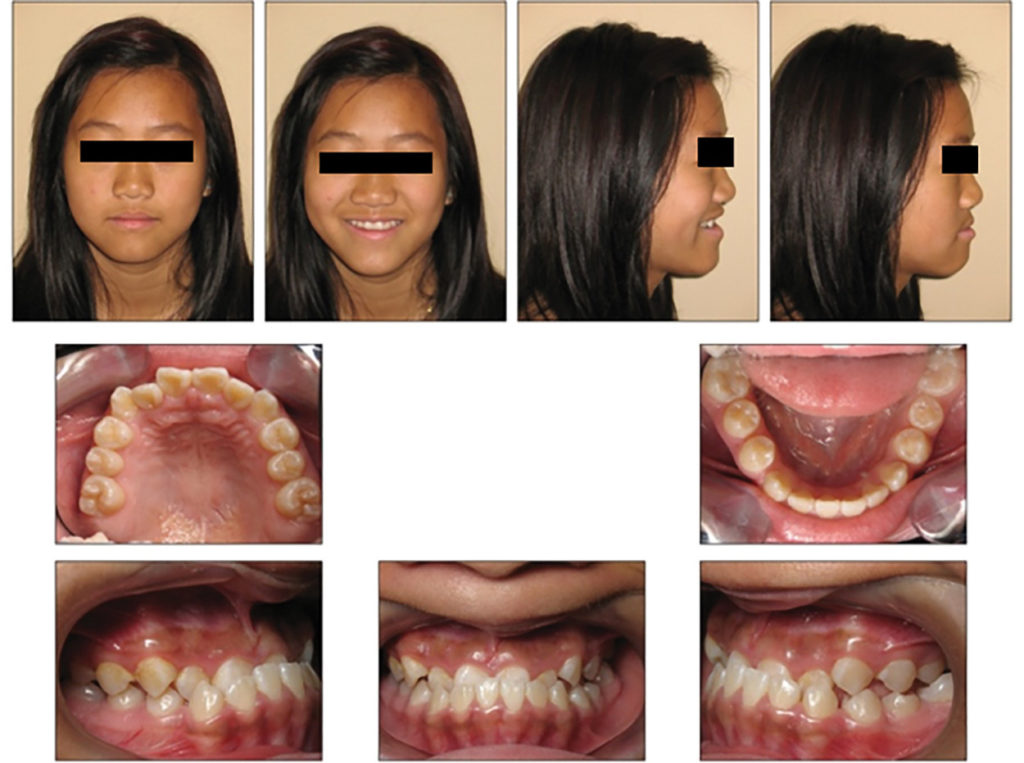 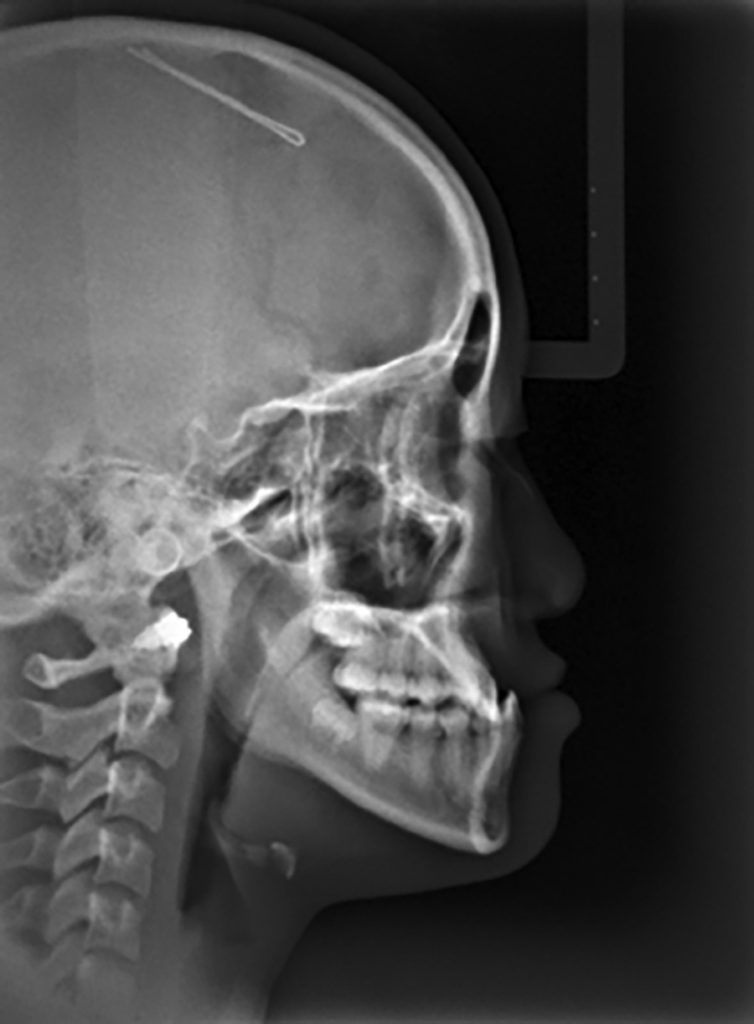 Treatment began with full fixed appliances as well as composite bite ramps at lingual of 3.1 and 4.1 and posterior vertical elastics (Fig. 3). The anterior crossbite was corrected within 8 months and the total treatment time was 31 months. Profile photo comparison shows the improvement in lip balance due to increased vertical dimension (Fig. 4). 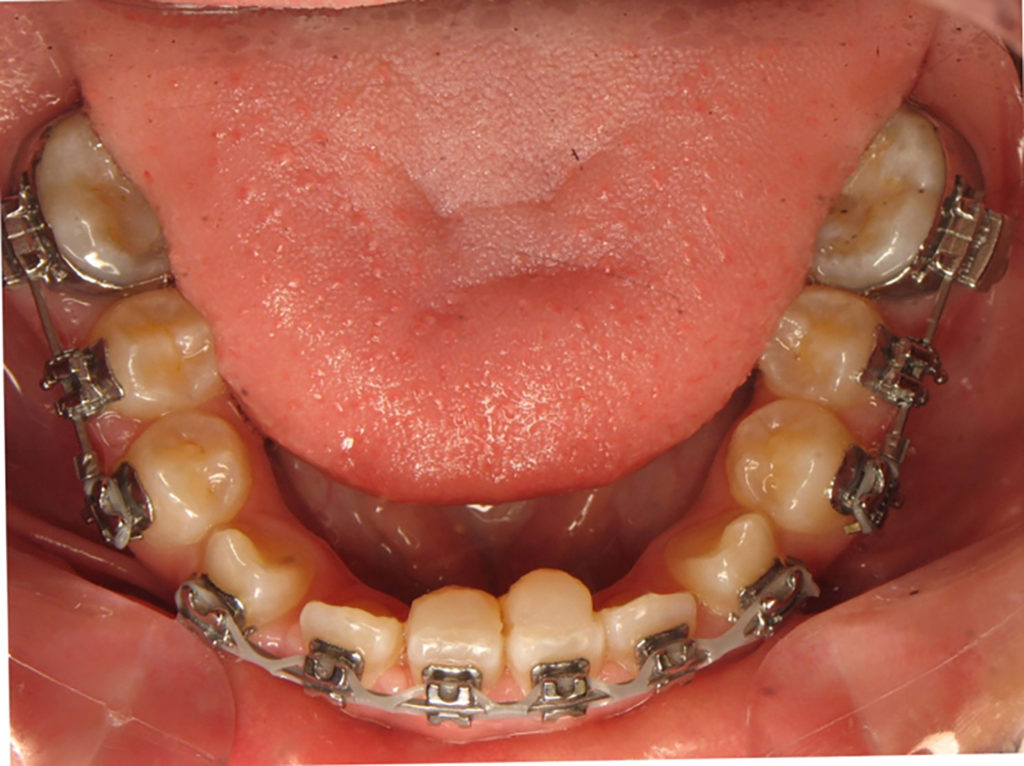 Case 1 mid-treatment photos
A) Composite bite ramps at lingual of 3.1 and 4.1; 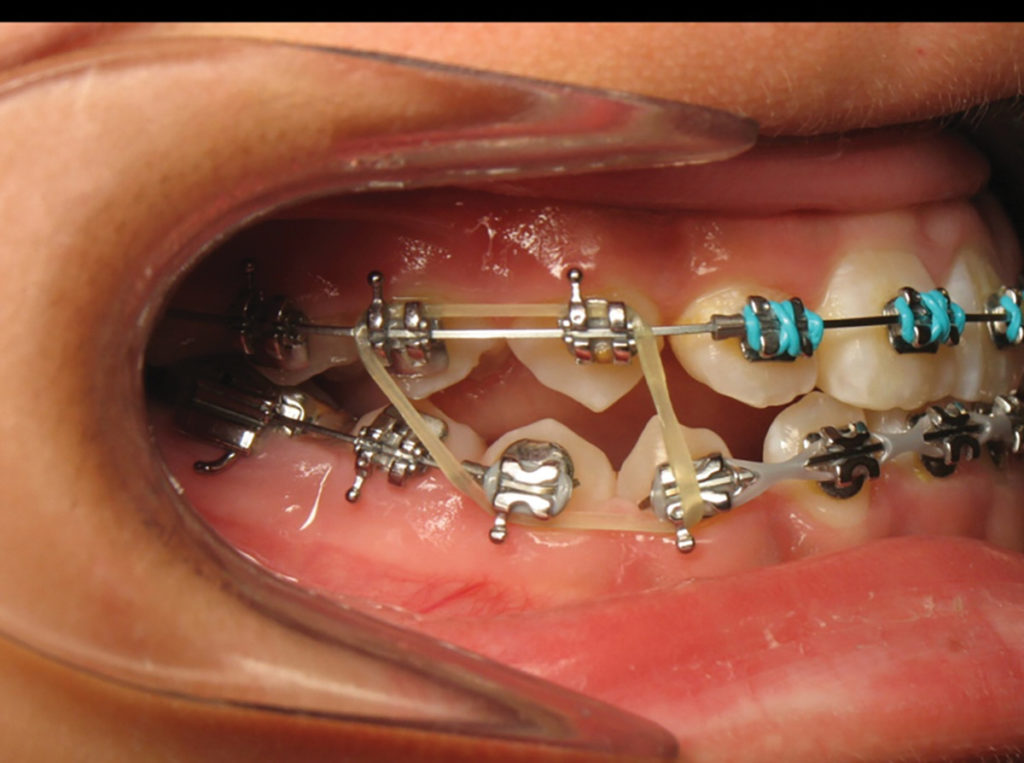 B) Interarch elastics for closure of lateral open bite 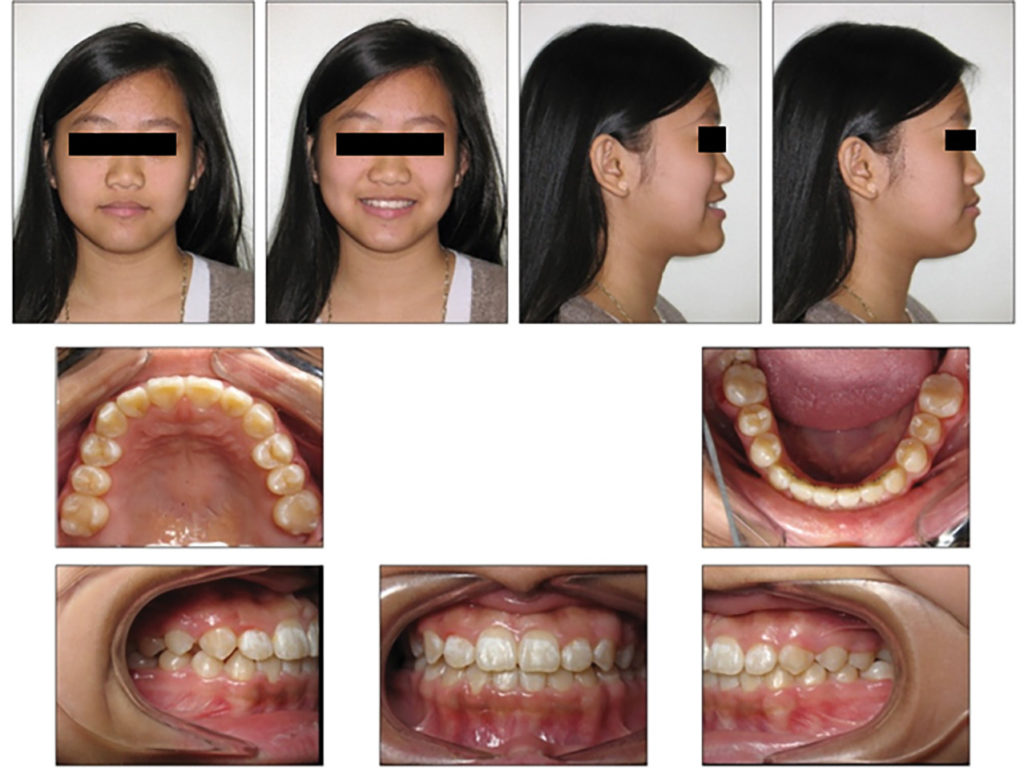 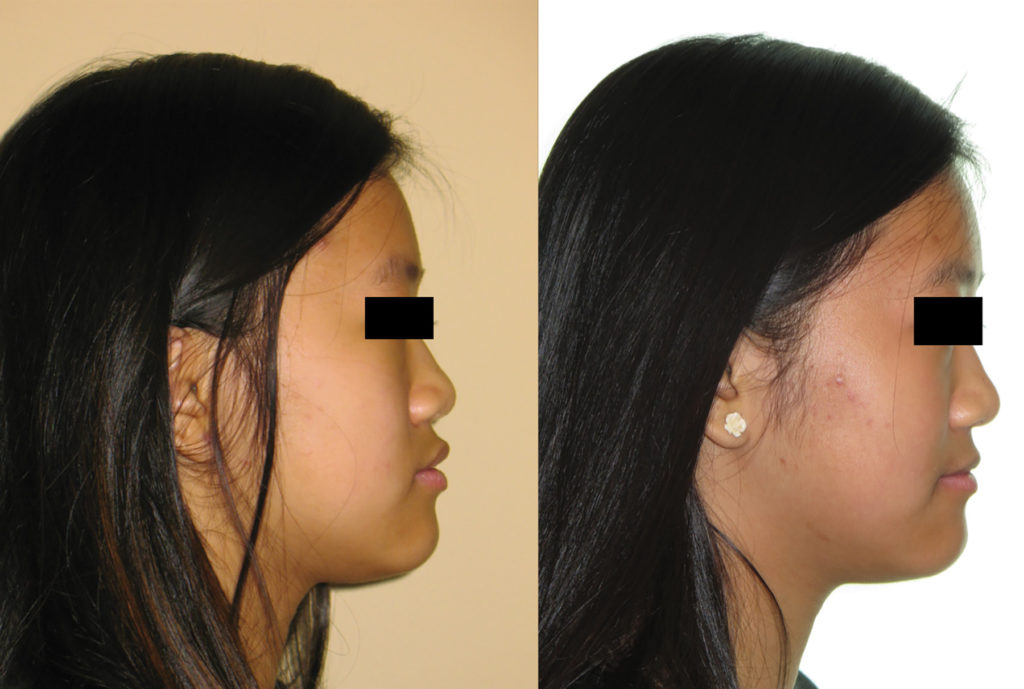 B) comparison of profile view at pre-treatment and 15 months retention.

Case 2
The patient was a 21-year-old male seeking resolution of his lower crowding and negative overjet (Fig. 5). He had moderate bimaxillary anterior crowding. His Class III was 5 mm on the right and 7mm on the left. Evaluating the qualifiers above: growth was mostly complete; the patient had no facial concerns; his lower anterior alveolar housing was deemed wide enough to allow incisor retraction and his lower posterior teeth were relatively upright over their apices. 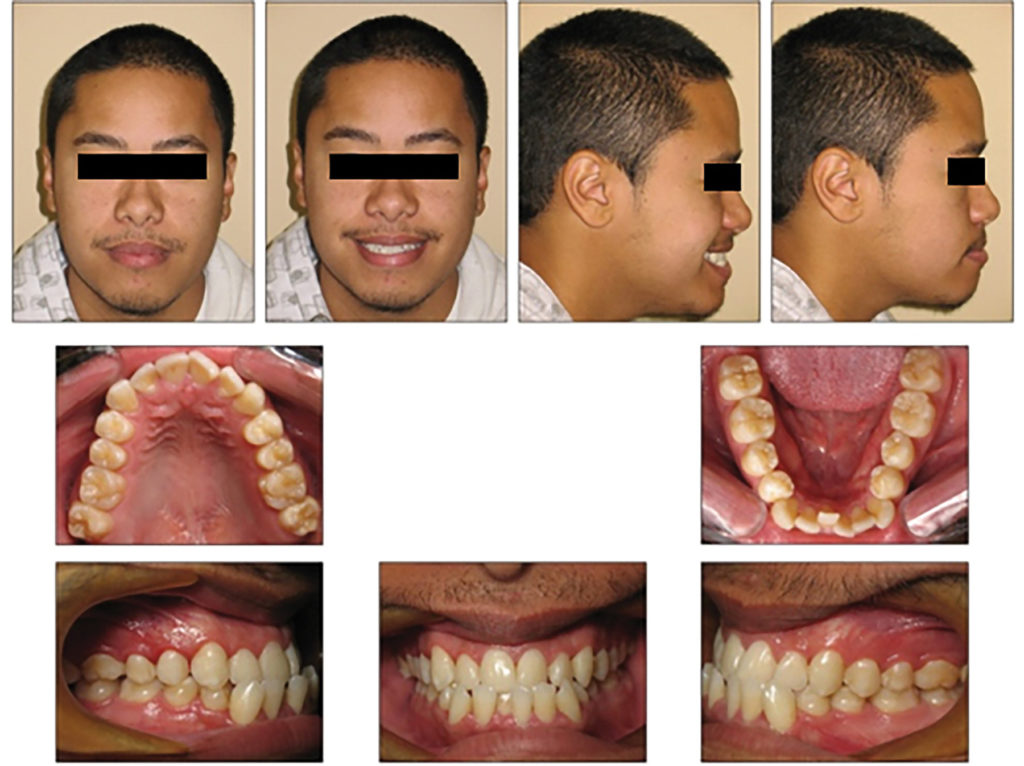 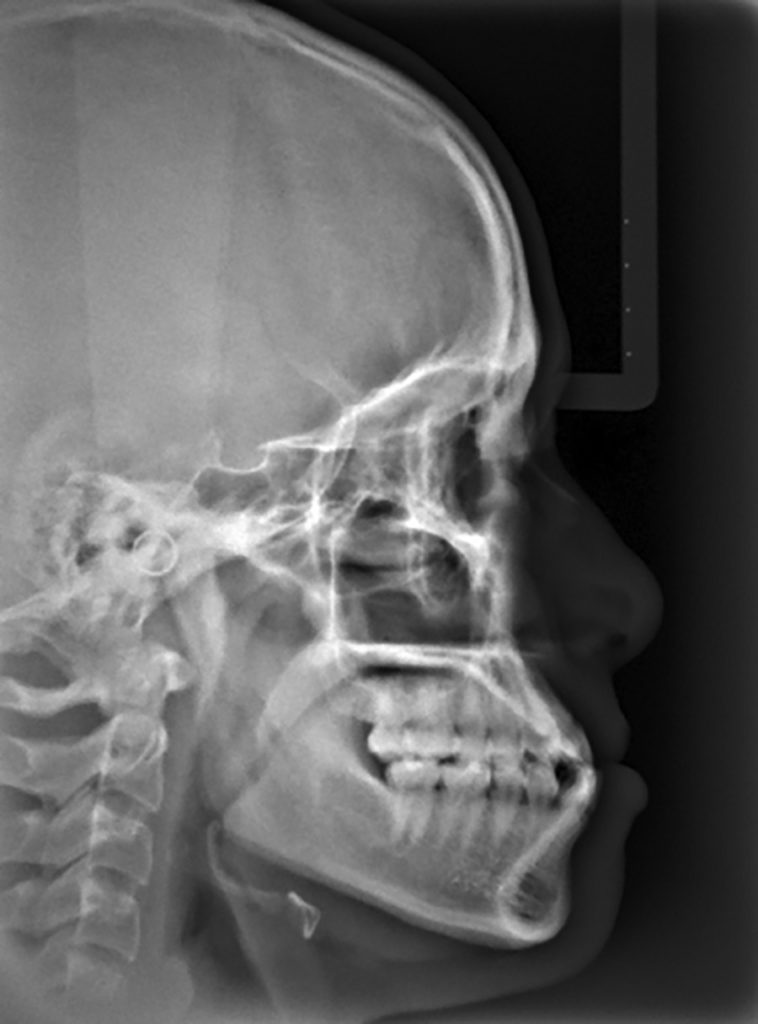 Due to the severity of his malocclusion the proposed treatment plan was full fixed appliances along with removal of lower cuspids (Strategy 2). Lower cuspid extraction is a rare treatment plan but it can be extremely effective when there are unusually high anterior spacing requirements, to either resolve crowding, or retract incisors, with minimal anchorage loss (Fig. 6).15 Additionally, when comparing canine guidance to group function, there is no evidence in the literature to support one scheme over the other.19 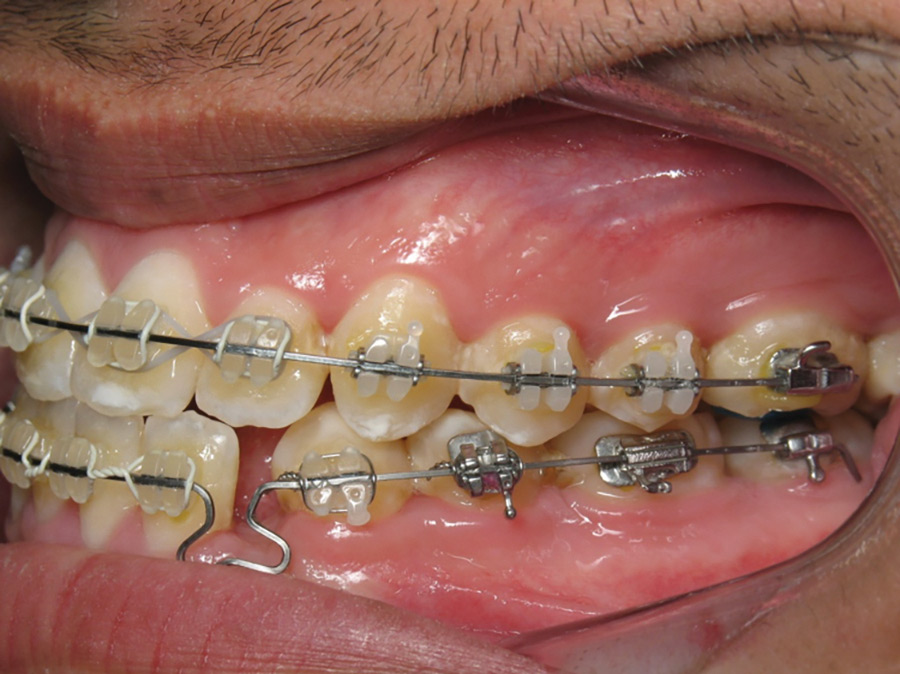 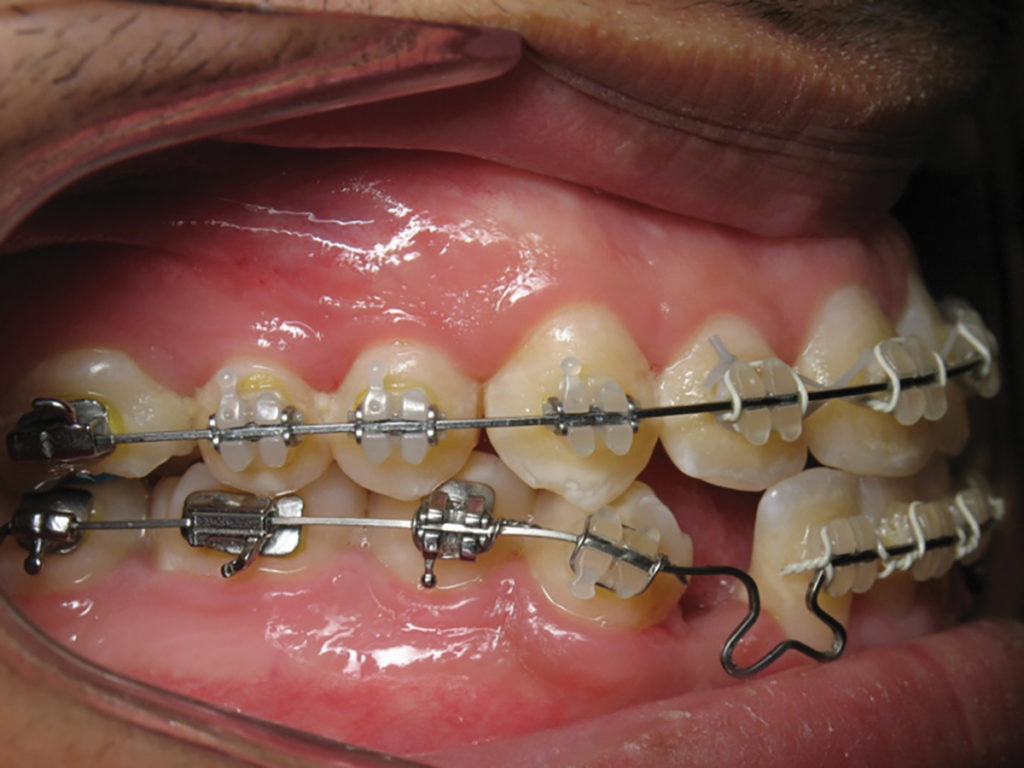 B) View of right buccal segment.

Treatment was uneventful and completed in 28 months (Fig. 7). The lower first bicuspids continued to function in the canine position just as they did at his initial presentation.

Case 3
This patient first presented at age 12.9 years old and her occlusion was monitored for 12 months to confirm that growth related changes had stabilized (Fig. 8). She presented with a bilateral Class III, more pronounced on the left side, with significant lateral open bite. The facial balance was paradoxically more evocative of Class II than Class III and the family declined surgical intervention. 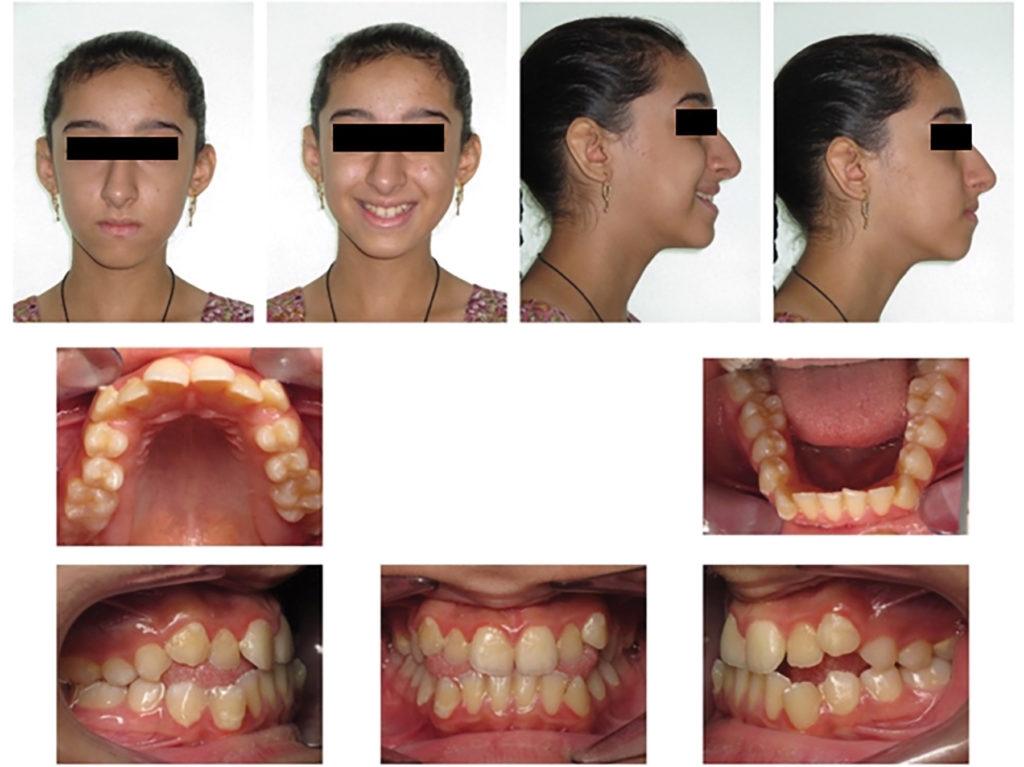 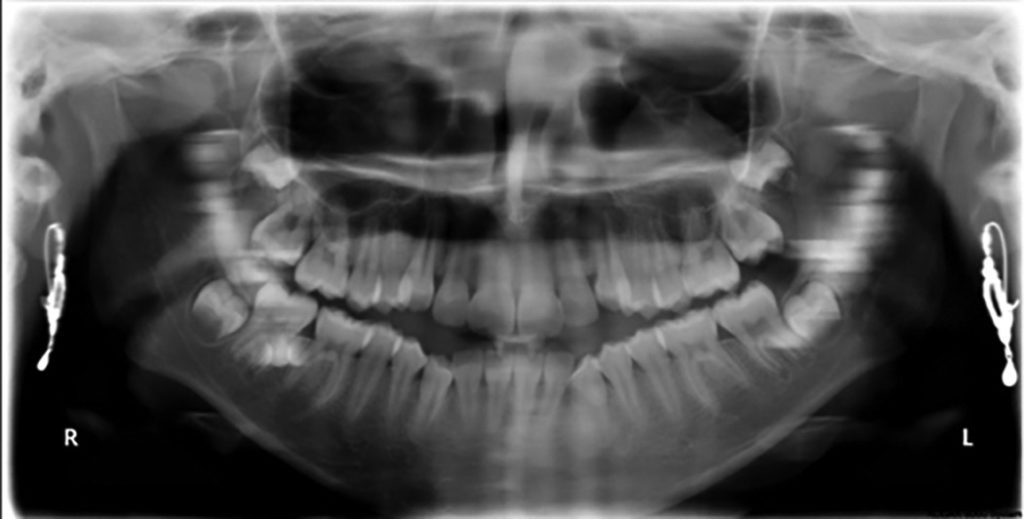 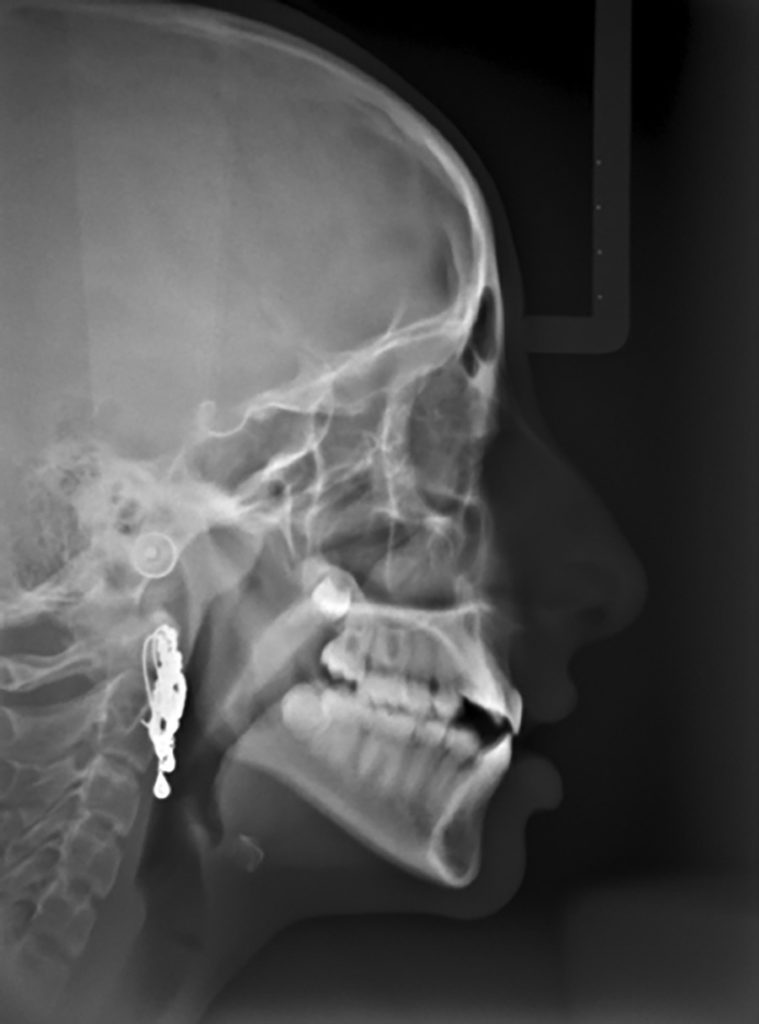 In evaluating her buccal segment occlusion, the crowns of lower premolars and molars were clearly mesially tipped over distal apices. This finding in conjunction with her lateral open bite made her an ideal candidate for posterior extraction and class III elastic therapy (Strategy 3).20 It was determined that removal of all four second molars would allow the most predictable correction of her malocclusion. The third molars would be expected to replace the second molars with a high degree of confidence into an acceptable position of periodontal health.21,22 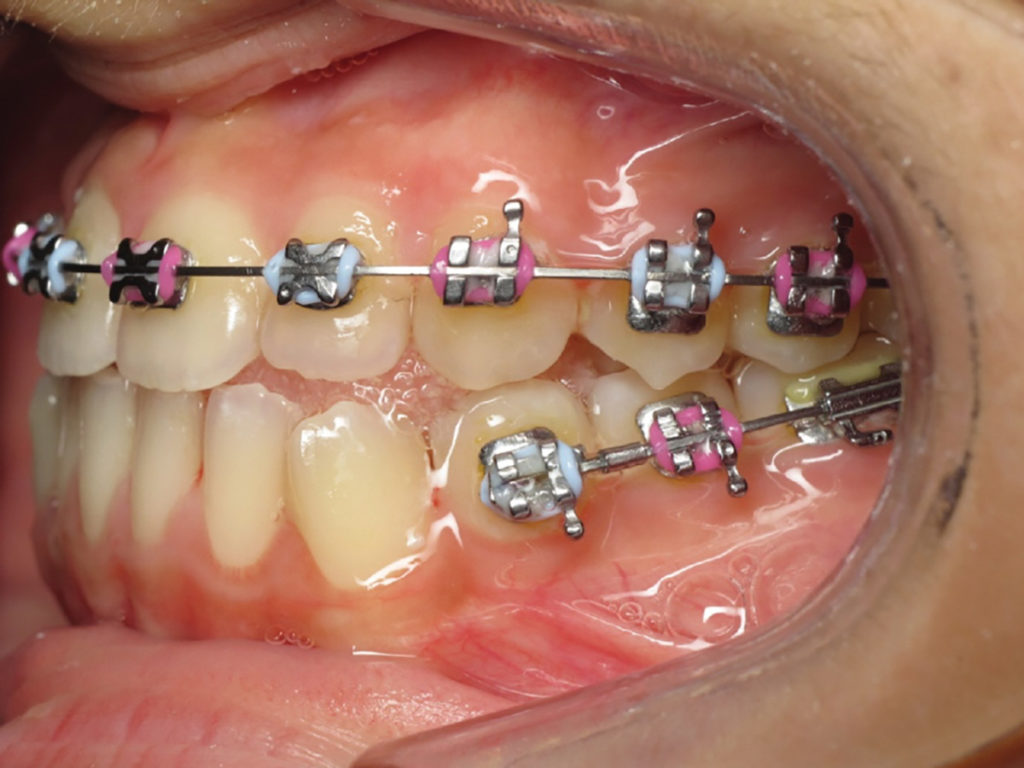 Case 3 mid-treatment photos with segmental mechanics on the mandibular arch. Progress at
8 months, note the significant bite closure at the lower laterals and cuspids. A) View of left buccal segment; 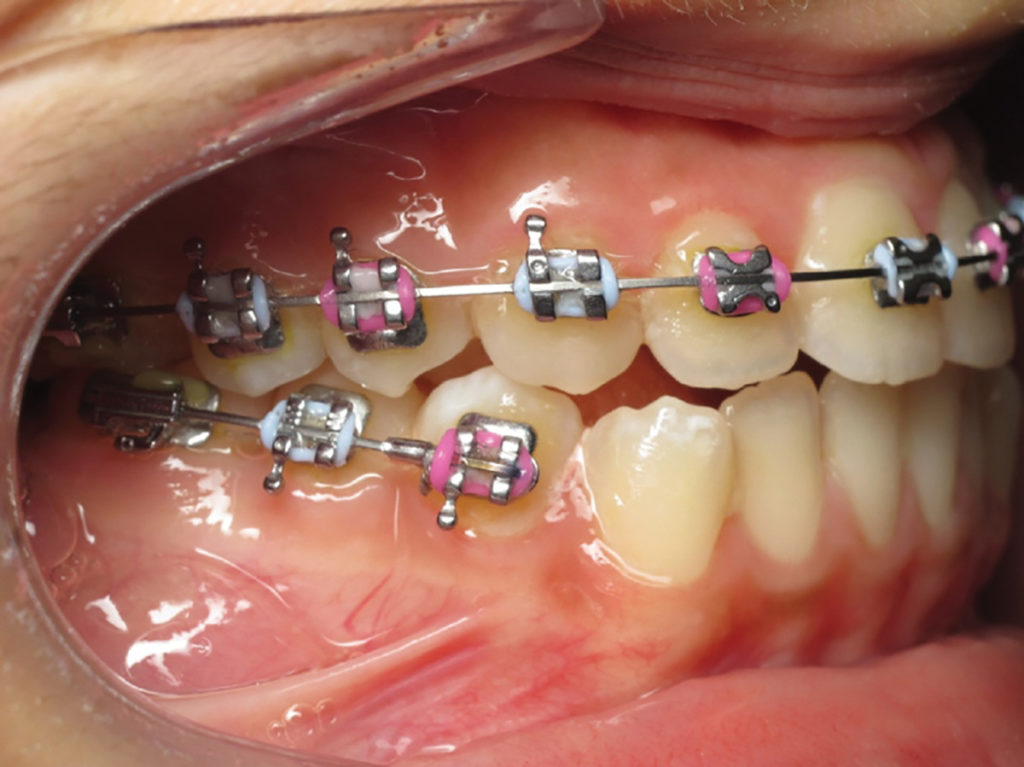 B) View of right buccal segment. 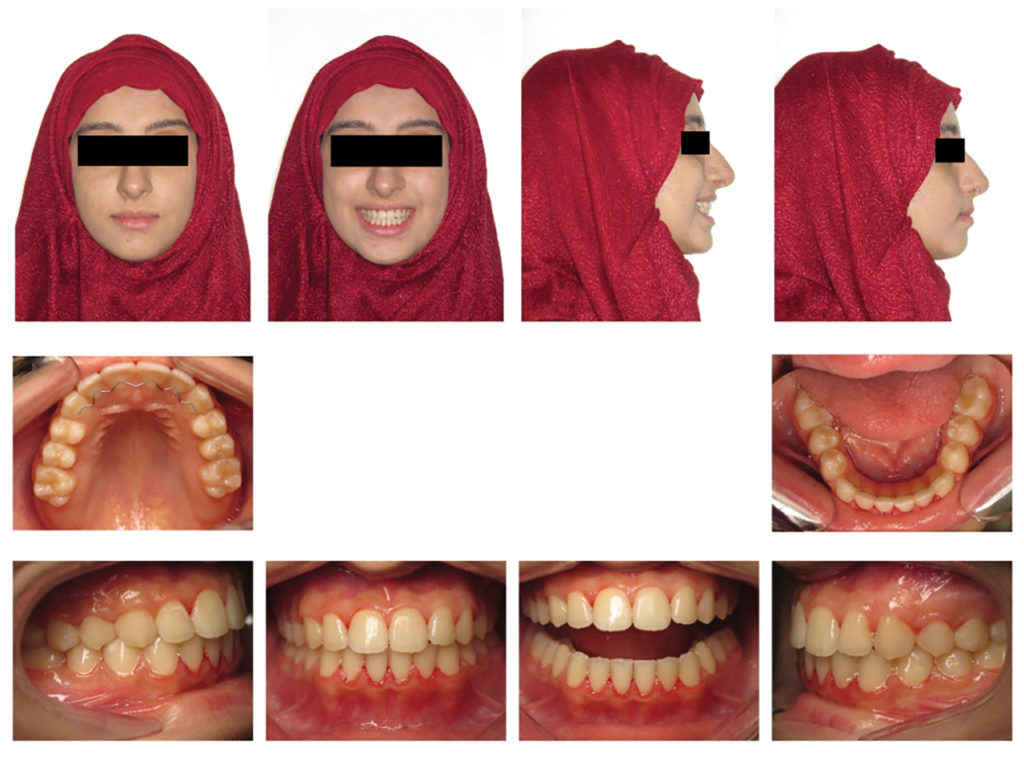 Conclusion
Orthodontic camouflage of skeletal Class III malocclusions is a valuable service for patients and their families that cannot or will not consider orthognathic surgery. It is important to be faithful to existing standards of nature when planning dental compensation of skeletal discrepancies.15 As with all orthodontic cases, a thorough diagnosis is essential for developing an appropriate individualized treatment plan.

Digital Dentistry: No Longer a Dream