Etiology
Palatal canine impaction can be of environmental, genetic or pathologic origin. For practical purposes it is important to know that maxillary canines should erupt between the ages of 10 and 12, and should do so similarly on both the right and left sides. If this doesn’t happen then a clinical and radiographic evaluation should be undertaken.

1. Environmental
The maxillary canine starts to calcify as early as the first molar but takes nearly twice as long to erupt. It has the longest period of development, the deepest area of development and a complicated path of eruption. This makes it susceptible to environmental influences.2 It is commonly believed that a small, malformed or missing adjacent lateral incisor plays a role in the ectopic eruption and possible impaction of the maxillary canine. This is known as the guidance theory, which hypothesizes that the root of the adjacent lateral incisor is an important determinant of the eruption path of the canine.3

3. Pathologic
The most common pathological origins of canine impaction are the dentigerous cyst and a supernumerary tooth.

Diagnosis
Clinical palpation of the erupting maxillary canines should be possible by the age of 10. The clinician should be able to feel two round bulges of 5 to 10 mm in diameter distal to the erupted permanent lateral incisors and apical to the deciduous canine. If these bulges can’t be palpated or if only one side is obvious then a panoramic radiograph should be taken.

The following signs should be observed in that radiograph:

Extraction of deciduous canines
The position of the canine cusp tip relative to the root of the adjacent lateral incisor on a panoramic radiograph is the most important determinant in how best to manage the situation when a permanent canine cannot be palpated facially. 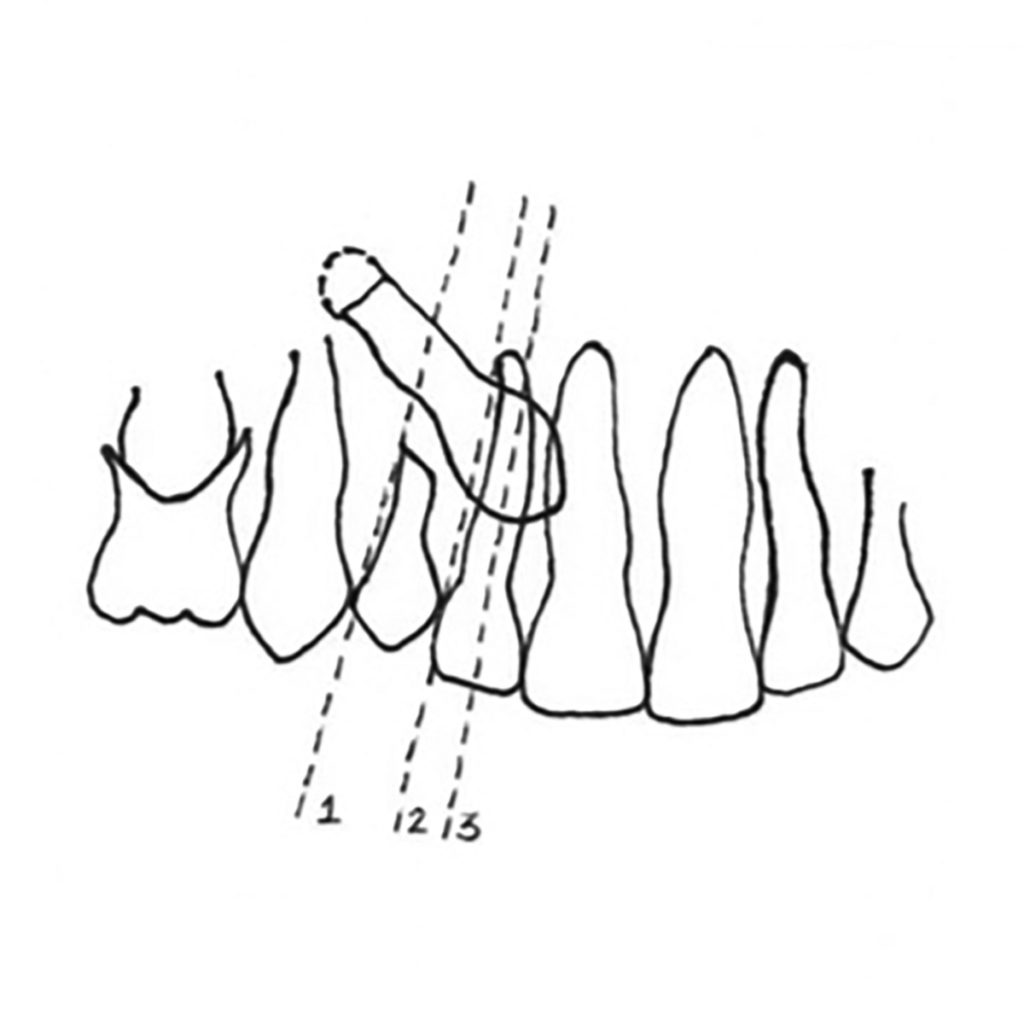 Location of the cusp tip of a palatally displaced canine determines the likelihood of permanent canine eruption with the extraction of the overlying deciduous canine. In Zone 1 there is a 90% chance of eruption, Zone 2: 65% and Zone 3: 0%.
Adapted from Erickson and Kurol.5

When the cusp tip of the permanent canine is distal to the root of the adjacent lateral incisor then the canine is in Zone 1. Extraction of the deciduous canine in this instance leads to normal eruption 90 per cent of the time (Figs. 1A & 1B).

Panoramic radiograph male age 11y6m. The cusp tip of 1.3 is in Zone 1. The deciduous canines were extracted at this time.
There is a 90% chance that 1.3 will erupt normally.

When the cusp tip of the permanent canine is past the distal surface but not past a line down the mid-root of the adjacent lateral incisor then the canine is in Zone 2. Extraction of the deciduous canine leads to normal eruption of the affected canine 65 per cent of the time (Figs. 2A & 2B). Thirty-five per cent of the time, the palatally displaced canine in zone 2 becomes palatally impacted (Figs. 3A & 3B).

Panoramic radiograph of male age 13y1m. The cusp tip of 2.3 is in Zone 2. The deciduous canine was extracted at this time.
There is a 65% chance that 2.3 will erupt normally.

Panoramic radiograph of female age 10y4m. The cusp tip of 2.3 is in Zone 2. The deciduous canine was extracted that this time.
There is a 35% change that 2.3 will not erupt normally.

Panoramic radiograph of the same patient 8 months later at age 11. 2.3 is palatally impacted. The extraction of the deciduous canine did not allow for normal eruption.

When the cusp tip of the permanent canine is past a line down the mid-root of the adjacent lateral incisor then the canine is in Zone 3. In this case the canine can be identified as being palatally impacted and the extraction of the deciduous canine will not lead to the normal eruption of the affected canine (Figs. 4A & 4B).

Exposure
The advent of composite bonding to enamel in the 1960’s led to the development of the closed eruption technique of impacted canine treatment. Closed eruption means that the impacted canine is surgically exposed with a palatal flap, some or all of the bone covering the crown of the canine is removed and an eyelet with an attached chain is bonded to the crown. A hole is made in the flap through which the chain exits and the flap is sutured back into place against the palate. The orthodontist then applies traction to the chain to effect movement of the impacted canine facilitating its eruption through the palatal tissue.

Prior to the 1960’s canines were open exposed.2 This involved a similar exposure of the impacted canine with the elevation of a full thickness palatal flap. All bone covering the canine crown is removed to the level of the CEJ being careful not to injure the CEJ. This could lead to external root resorption. A hole the size of the canine crown is made in the palatal flap before the flap is sutured in place. Periodontal pack is placed in the hole of the flap. One week later the pack is removed by the orthodontist (Fig. 5). The patient should be seen one month later to ensure proper healing and no overgrowth of the crown. If there is evidence that the hole is diminishing in diameter an attachment can be bonded to the canine crown. If the hole does close for some reason then it should be re-opened by the surgeon. This is a simple procedure, which could be done with laser or scalpel. 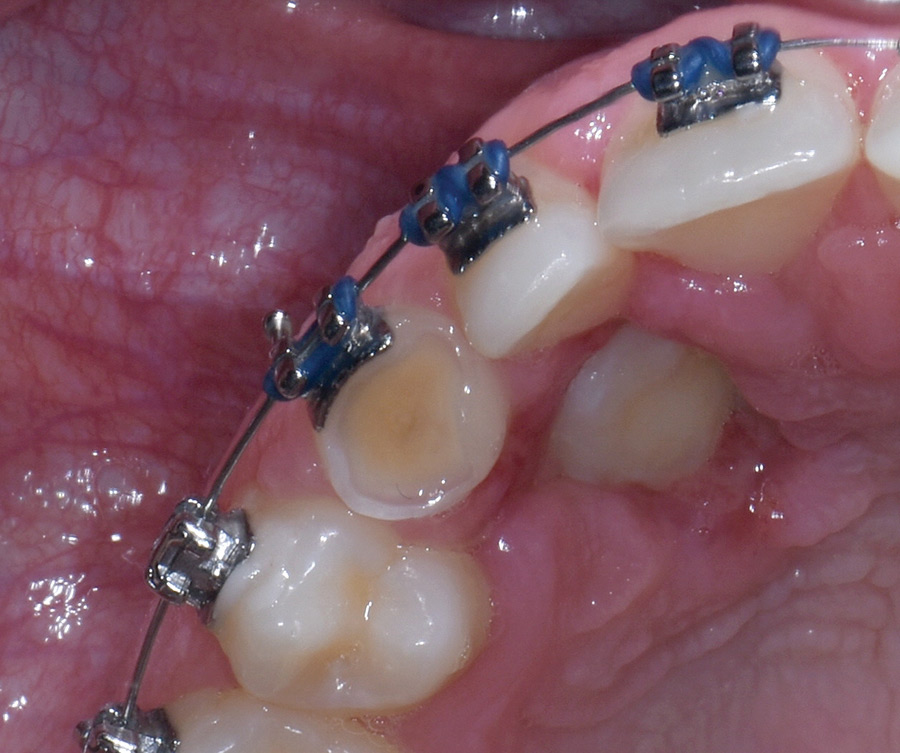 An open exposure should be performed when a canine is determined to be palatally impacted. The root of the permanent canine should be one half to two thirds formed so that it is in a state of active eruption. This can be done as early as nine years of age.

The deciduous canine should be left in place at the time of the exposure for several reasons:

Advantages of open exposure
The open exposure can be done prior to a patient being ready for orthodontic treatment. The tooth is able to erupt into the palate and away from the adjacent incisors thereby lessening the risk of the canines resorbing them. The canine generally erupts to the level of the occlusal plane but remains palatally positioned. In essence the problem is reduced from an impaction to a crossbite.

Generally following the open exposure the periodontal ligament becomes functional. In an adult the PDL of an impacted tooth can experience atrophy of disuse, which makes spontaneous eruption less likely, and extrusive orthodontic forces may have to be applied.7 In the case of the closed exposure the primary stimulation of the PDL comes with active force application.

With open exposure there is less risk of undermining resporption of the overlying palatal bone, which results in leaving better bone support on the tension side of the root of the tooth. With the closed exposure approach there is a greater risk of undermining resorption during the application of traction particularly if sufficient bone covering the crown was not removed at the time of exposure.8

Biomechanics
There are three phases of movement of the palatally impacted canine into its final position.

1. Movement in the palate. The canine may require extrusion, lateral movement towards the alveolus and rotation. The final position of the canine in this phase is directly lingual to the deciduous canine, known as the docking position. These movements can be accomplished with auxillary appliances and attachments as necessary (Fig. 6). 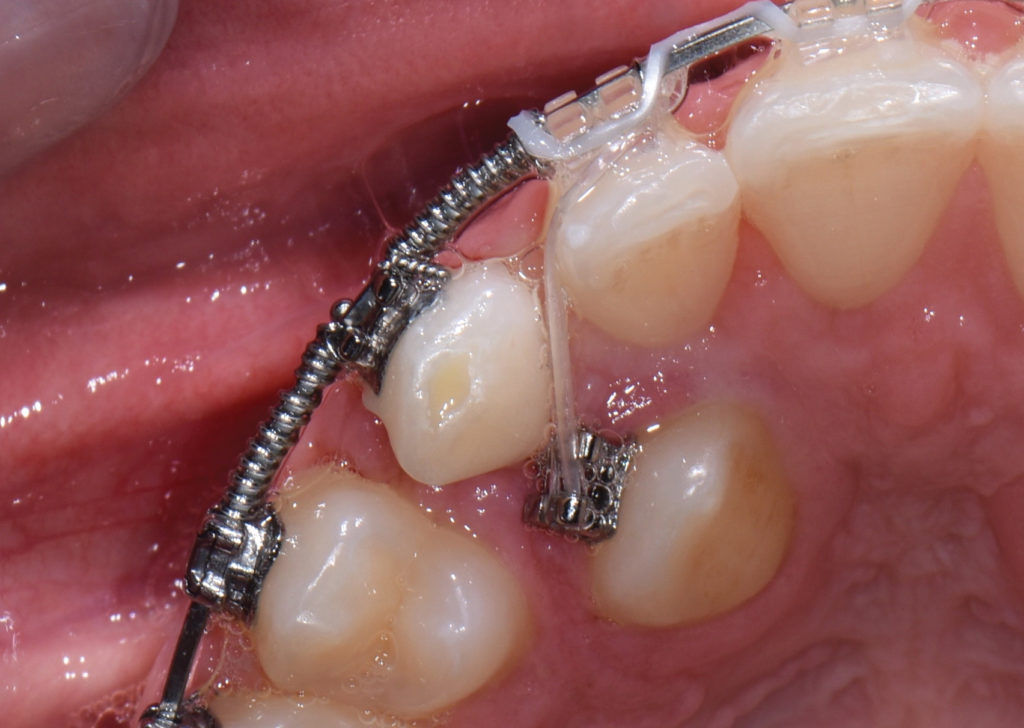 1.3 in the docking position following movement in the palate. At this point the patient is sent to have 5.3 extracted.

2. Movement into the alveolus. Once the canine is docked it is time to have the deciduous canine extracted. At docking the canine must be properly vertically positioned such that the cusp tip is at the plane of occlusion. There must be sufficient arch length at the site of the canine. An overlay round small diameter nitinol arch wire is very effective in moving the canine quickly into the alveolus. It is very important that there is a full size rectangular base arch wire in place with a v-bend stop mesial to first molar brackets with a cinch on the distal. This ensures that there are no reactionary forces to the movement of the canine. The overlay wire should extend to the distal of the premolars through auxillary slots on the premolar brackets as found on Damon Q or Speed brackets. This allows the overlay wire to slide without friction as the canine moves into the alveolus (Fig. 7). 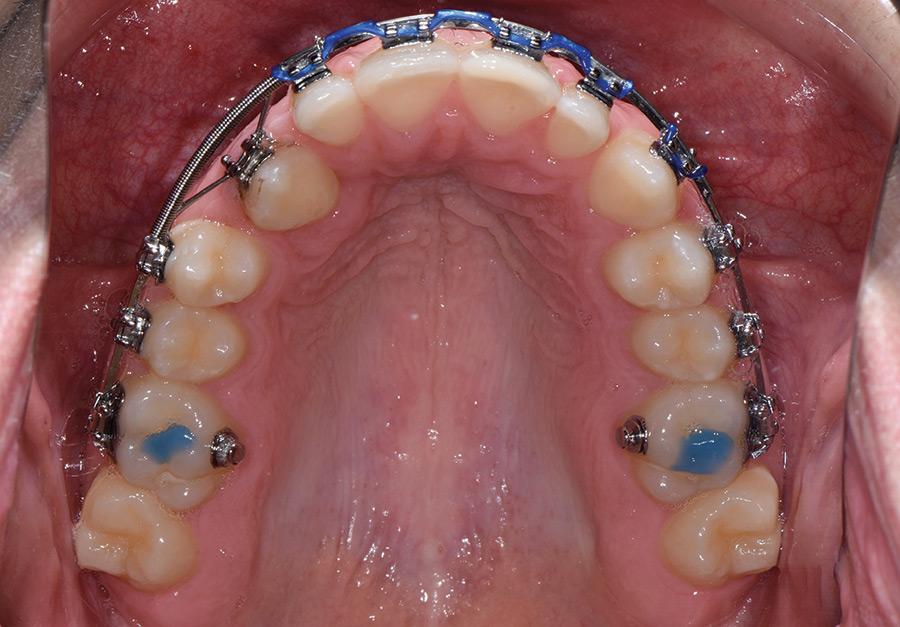 An overlay wire in place moving 1.3 into the alveolus. Note that the base wire has a v-bend stop mesial to the first molar brackets and a cinch on the distal.

Periodontal response
In an ideal finish the ginvigal margin of the impacted canine is ideally positioned relative to the CEJ with a normal biological width. The open exposure technique is known to result in a better alveolar bone and periodontal response.9 The biomechanical process of tooth movement described here limits tissue bunching as the canine is moved into position. Excellent oral hygiene is critical to a healthy periodontal outcome.

If the gingival margin(s) are not ideal then the following factors should be considered and managed as necessary:

1. Inflammation: improved oral hygiene.
2. Excess tissue: gingival recontouring to establish a normal biological width.
3. Short anatomical crowns: this can only be managed with crown lengthening and restorative care.
4. If the root is too lingually inclined the gingival tissue will rest lower on the crown of the tooth. This would require the application of further orthodontic tooth movement to torque the root buccally.

Retention
Palatally impacted canines are highly prone to relapse even when ideally positioned. They tend to intrude, move lingually and rotate. A bonded lingual wire from canine to canine is necessary to prevent intrusion and rotation (Fig. 8). A removable retainer worn at bed time will help prevent lingual movement of the canine. If possible, a clear full coverage retainer extended to the gingival margin of the canine also helps prevent intrusion. Also helpful is a circumferential supracrestal fiberotomy. This can be performed in conjunction with gingival recontouring if necessary.

Bonded lingual retainer from canine to canine. This patient had palatal impaction of 1.3 and 2.3.

Summary
In summary, the most important takeaways for the predictable management of palatally impacted canines are the following:

1. Open exposure as soon as palatal impaction is detected provided there is one half to two thirds formed. This will allows for autonomous eruption.
2. Leave the ‘c’ in place until the ‘3’ is docked.
3. Ensure adequate canine root torque and finish in a Class I relationship.
4. Retain with a bonded lingual 3 to 3 wire and removable retainer. In addition, perform a circumferential supracrestal fiberotomy.

Dr. Helpard is in the private practice of orthodontics on Vancouver Island, British Columbia. He is a consultant orthodontist on the Cleft Palate and Craniofacial Anomalies Team at BC Children’s Hospital. He is also a Clinical Assistant Professor in the Graduate Orthodontics Program at the University of British Columbia. Dr. Helpard is a Fellow of the Royal College of Dentists of Canada and has also served as an examiner. He is a Diplomate of the American Board of Orthodontics and is a Member of the Northwest Component of the E.H. Angle Society.

RELATED ARTICLE: Palatally Displaced Canines Is There A Way To Prevent Impaction Of These Teeth?