Probiotics and Their Potential for Adjunctive Use in Periodontal Therapy

The main objective in the treatment of periodontitis is removal and disruption of bacterial biofilm.1 This can be performed via non-surgical approach (scaling and root planning/SRP) or via surgical approach by employing open flap debridement (OFD) for deeper inaccessible periodontal pockets.2 Along with oral hygiene instructions for improved oral care at home, this can result in clinical improvement observed as periodontal pocket depth (PPD) reduction and improvement in clinical attachment levels (CAL) upon periodontal re-evaluation.3 The oral microbiota is extremely complex and dental biofilms are considered difficult therapeutic targets.4 To increase the efficacy of non-surgical periodontal treatment, adjunctive treatments have been proposed such as the use of local antibiotic therapy and photodynamic therapy with variable results.5,6 The encouraging effects of probiotics in various fields of healthcare have resulted recently in the introduction of probiotics for oral healthcare.7,8 An approach consists of modulating the composition of the newly formed oral biofilms through the administration of probiotics simultaneously with SRP.9 This article will briefly discuss the potential adjunctive use of probiotics in periodontal therapy.

Probiotics
The general interest in probiotics and the modulation of the microbiota for restoring and maintaining health have gained a lot of attention recently. The term ‘probiotic’ is relatively new, and used to name live microorganisms (bacteria), which have been researched as a therapeutic strategy to prevent or treat human inflammatory diseases.10,11 Although the mechanisms of action of probiotics are not completely understood, they appear to modulate both the microbiota and the host response.12,13 Probiotics when administered in adequate amounts, have been shown to confer a health benefit to the host through prevention of adhesion of pathogenic species, inhibition of bacterial growth, and modulation of the mucosal immune system or the cell proliferation processes.14 Probiotic species mostly belong to the genera Lactobacillus or Bifidobacterium15 and are commonly used to treat diseases related to the gastrointestinal tract, urogenital infections, oropharyngeal infections and eczema.14,16

Probiotics and their adjunctive role in periodontal therapy
Probiotics have also been investigated for periodontal health and this can be related to the current view on the etiology of plaque-related periodontal inflammation. This etiological view considers three factors that determine whether disease will develop in a subject: a susceptible host, the presence of pathogenic species and the reduction of the so-called ‘beneficial bacteria’.17,18 Due to the difficulty in influencing host response, traditional periodontal therapies focus on the reduction of the bacterial load or threat.19 This treatment strategy is based on a mechanical subgingival debridement in combination with improved oral hygiene.20 This shifts the subgingival microbiota to a less pathogenic composition, which is characterized by high proportions of Gram-positive aerobic species and low proportions of periodontopathogens.21,22 However, in some patients, this is either not achievable or the patients do not respond as expected. This leads to the question: what would be the clinical influence of probiotics as an adjunctive therapy to mechanical plaque removal?

The therapeutic effects of probiotics at the periodontal level have been investigated in in vitro and in vivo models.7,23,24 In mice, topical application of Lactobacillus brevis CD2 was shown to inhibit ligature-induced gingival inflammation, stop bone loss and reduce the gram-negative bacteria count.23 This is thought to be via anti-inflammatory action, through the suppression of nitric oxide synthesis.25 The application of probiotics in combination with SRP in periodontal pockets has been studied in a dog model where periodontitis was induced and produced evidence of delayed and reduced subgingival recolonization by periodontal pathogens and of significant reduction in Bleeding on Probing (BOP).7 At the clinical level, several studies have been conducted to assess the impact of probiotics on periodontal health and disease management.26-29 In a human study, lozenges containing probiotics or placebo were applied topically in the mouth and allowed to dissolve slowly. It was shown that the probiotic had a modest effect in reducing signs of experimental gingivitis in probiotic treated volunteers compared with the placebo-treated group.30

Several clinical studies have researched Lactobacillus reuteri; overall, the results from these investigations indicate that this probiotic treatment can be an effective adjunctive treatment to conventional periodontal therapy as it leads to significant improvement in clinical indicators of periodontal disease.13,31 A placebo-controlled, parallel study was conducted by Iniesta et al. on gingivitis patients to investigate the effects of an orally administered probiotic on the oral microbiota. The effect of L. reuteri administered resulted in a reduction in the number of selected periodontal pathogens in the subgingival microbiota.29

Vivekananda et al. conducted a double blind, randomized, placebo-controlled clinical trial of volunteers with chronic periodontitis.32 The aim of this study was to evaluate the effects of the probiotic product Bio Gaia Prodentis (Lactobacilli reuteri Prodentis) alone, and in combination with scaling and root planing (SRP).

Bio Gaia Prodentis is a commercially available product that comes in the form of lozenges containing the lactic acid bacterium L. reuteri Prodentis (a strain combination of L. reuteri DSM 17938 and L. reuteri ATCC PTA 5289). The randomized controlled trial demonstrated plaque inhibition, anti-inflammatory, and antimicrobial effects of L. reuteri Prodentis. The researchers concluded that this probiotic can be recommended during non-surgical therapy and the maintenance phase of periodontal treatment.32 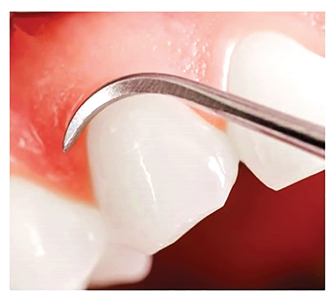 Scaling of a tooth with a curette 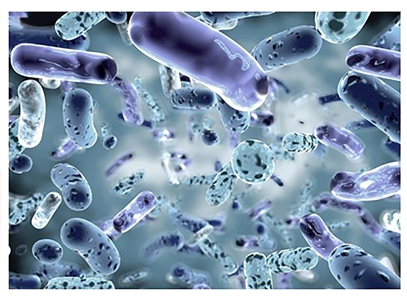 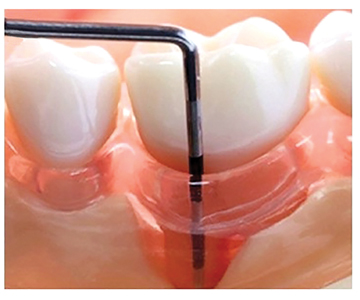 A systematic review by Gruner et al. investigated the short-term clinical influence of the specific probiotic L. reuteri Prodentis as an adjunctive therapy of SRP, in terms of PPD reduction and CAL gain, when compared with SRP alone or in combination with placebo in the treatment of periodontitis.33 All the included studies had a low risk of bias and the studies pooled in the meta-analysis shared similar features: neither smokers nor patients with other confounding factors such as systemic diseases or antibiotics intakes were included, oral hygiene instructions were given and the probiotic bacteria and doses per day were the same for all the studies, although the time of administration varied between the studies. The findings of this meta-analysis seemed to support the adjunctive use of L. reuteri to SRP in periodontitis treatment short term, especially in deep pockets.33

An important consideration is whether probiotics can be detected in the oral cavity after discontinuation of administration. A study by Caglar et al. investigated this and revealed that the number of L. reuteri decreased gradually, and after 1 week only 8% of the subjects harboured the bacterium. More importantly, after 5 weeks, L. reuteri was not detected in any of the subjects.34 Hence the study concluded that administration of this probiotic for 2 weeks does not seem to be sufficient for permanent colonization in the oral cavity.34 This indicates that the use of probiotics and future research must focus on not only short-term benefits, but also establish how long they need to be administered to maintain and continue the beneficial effect. Although current evidence indicates that combination of probiotic treatment and SRP is generally more effective than SRP alone in reducing clinical indices of periodontal inflammation, long-term efficacy, as well as safety, of probiotics need to be established before any firm clinical recommendations can be made.

Conclusions
Probiotics may not only suppress the emergence of endogenous pathogens or prevent infection with exogenous pathogens but can perhaps also protect through the promotion of a beneficial host response. For treatment of periodontitis with probiotics, sufficient evidence is available with regards to one parameter, namely periodontal pocket depth reduction. Similarly, indicators of gingival inflammation have also been found to be positively affected by probiotic therapy. However, probiotic therapy may not be seen as a treatment that permanently alters the oral microbiota, like toothbrush and flossing routines. The effects will only take place as long as the product is used. As soon as the patient discontinues its use, the effect will likely disappear and therefore does not appear to sustain a shift to a stable non-pathogenic microbiota. It needs to be accentuated that these results can’t be generalized to other probiotic products or modes of application; not all probiotics are created equal.

In conclusion, available data suggests that probiotics like Lactobacillus reuteri (Bio Gaia Prodentis) may offer new therapeutic and preventive options in the clinical control of plaque-related gingival inflammations by either direct microbiological interactions or by immunomodulatory interactions.

Dr. Sheikh is trained as a dental clinician and a biomaterial scientist with degrees of BDS, MSc and PhD in dentistry from Baqai Dental College, Queen Mary, University of London and McGill University. He has completed two Post-Doctoral Fellowships at the Faculty of Dentistry, University of Toronto and at Mount Sinai Hospital. He is currently a Senior Periodontics Resident at Dalhousie University.

Dr. Arama graduated from the University of Medicine and Pharmacy in Timisoara, Romania, with a BDS. She spent several years in Ireland in general practice and obtained postgraduation certifications across the UK and Ireland, with training in minor oral surgery and periodontology. She currently works with a special interest in minor oral surgery and orthodontic aligners in Romania.