Caleb Sears was a healthy six-year-old boy in California that went to his oral surgeon’s office for a routine extraction under general anaesthesia (GA). Unfortunately, Caleb did not survive the procedure. He suffered hypoxic brain damage and he was not able to be resuscitated. Caleb’s death lead to the introduction of Caleb’s Law which was signed by the Governor of California and went into effect on January 1, 2017. It requires that the Dental Board of California: 1) establish a committee to determine the safety of pediatric anaesthesia in dental offices; 2) facilitate epidemiological study of pediatric anesthesia and sedation by collecting information regarding adverse events, and; 3) require clinicians licensed by the board to administer GA to inform parents/guardians of the differing practice models and safety precautions currently in place (AB 2235). This event as well as others have This event, as well as others, has sparked the question, “Is Dental Anaesthesia safe?”

History of Dental Anaesthesia
Dental anaesthesia has existed since the early 1950s when the American Society of Dental Anesthesiology was established, and the practice became recognized by the American Society of Anesthesiologists in 1987 (Reed, 2009). It is well known within the profession that administering anaesthesia is not without risk. Respiratory and cardiovascular depression are well known dose-dependent side effects of medications routinely administered to achieve a state of deep sedation or GA. Safe practice of deep sedation and GA has taken place in the dental office for several decades based on careful consideration to patient selection, anaesthetic technique, monitoring, and anaesthetic team training in the management of unanticipated adverse events and emergencies (Bennett et al., 2015).

Review of Mortality Rates
Several studies have sought to publish mortality rates for deep sedation and GA in the dental office. Mortality, or death, has several operative definitions in the literature. The Australian and New Zealand College of Anaesthetists uses a fairly clear definition where they define death attributable to anaesthesia as, where it is reasonably certain that death was caused by anaesthesia or other factors under the control of the anaesthesiologist (ANZCA, 2005). Most of the mortality data available in dental anaesthesia has been presented in studies analyzing retrospective survey or closed claims data. D’Eramo (1992) conducted one of the first studies examining both morbidity and mortality rates in dental anaesthesia. A survey of the members of the Massachusetts Society of Oral and Maxillofacial Surgeons was conducted. It requested self-report by clinicians of adverse events and/or death they had encountered in their practice. The mortality rate was found to be 1 in 1,000,000 cases (D’Eramo and Edward, 1992). The survey was repeated in 1999 and a third time in 2002 within the same provider group. In 1999, the mortality rate was found to be 0 in 1,000,000 (D’Eramo, 1999), and it increased slightly to 1.17 in 1,000,000 by 2003 (D’Eramo et al., 2003). Another retrospective study by Deegan (2001) estimated the mortality rate in the U.S. over the twelve-year span from 1988 to 1999. The study was based on closed claims data from AOMS National Insurance Company, which insured the majority of practicing U.S. oral surgeons at the time. The study found an office mortality rate of 1.3 deaths in 1,000,000 cases (Deegan, 2001). The most recent closed claims study was published by Bennett, Kramer, and Bosack (2014). In this study, retrospective data were obtained from the OMSNIC insurance company, which insured approximately 80% of oral and maxillofacial surgeons in the U.S. in 2014. In the 14-year period from 2000 to 2014, 113 cases resulted in death or brain injury. The authors postulated that one such event occurred every 6.4 weeks, which would represent a mortality rate of 2.9 in 1,000,000 cases (Bennett et al., 2015). However, it is not clear here whether the authors considered brain injury where the patients survived to be part of the mortality dataset. This may have contributed to the slightly higher rate published as compared to other studies. To date, Nkansah et al., (1997) is the only study aimed at determining dental anaesthesia mortality rates in Ontario. This study reviewed the ten-year period from 1986 to 1995. The mortality rate reported in this study was 1.4 in 1,000,000 cases (Nkansah et al., 1997). This study was unique in its methodology in that it not only used closed claims data to estimate mortality, but it also involved the Office of the Chief Coroner of Ontario. Cases where an anesthesia-related death occurred in a dental office under deep sedation or GA were reviewed for inclusion. This approach arguably provided an accurate representation of the prevalence of mortality for deep sedation and GA in Ontario.

These studies do have limitations. Retrospective studies dependent on closed claims data are limited in that insurance companies have no obligation to report cases involving death or adverse events. If these cases are not litigated or they are settled, they become sequestered, and they may not be represented within these datasets (Bosack, 2015). Studies that surveyed anaesthesia providers regarding mortality incidents are impeded in their accuracy by the clinicians’ fear that voluntary reporting might result in punishment or other negative consequences for the provider (Bosack, 2015).

Developments in Care
Since Nkansah’s (1997) study, there have been improvements in monitoring techniques, development and widespread adoption of practice guidelines, and other systematic approaches to reducing errors, including the “Harvard Standards” (Eichhorn, 1986; Lagasse, 2002). D’Eramo’s (1992, 2003) studies provide insight into this as they reported an increase in the use of pulse oximetry of almost 20% in the twelve-year span between those studies. This increase was most likely due to the growing adoption of the pulse oximeter as an essential monitor in anaesthesia practice. The pulse oximeter measures oxygen saturation, and its use during GA is considered the standard of care (Eichhorn, 1986; RCDSO, 2012). It is likely that there also has been an increase in the use of this monitor in Ontario as well. This situation may have had an effect on the incidence of critical incidents especially those of a respiratory nature, however, this could only be confirmed with an updated study.

Keeping it in Perspective
To gain perspective on the published mortality rates, Table 1 displays the probability of dying by various causes as determined by the U.S. National Safety Council (NSC, 2013). The highest published mortality rate in the studies reviewed above was by Bennett et al., (2014) of 2.9 deaths per million cases. This rate could be compared to the odds of dying in a motor vehicle crash, which is one in 113 crashes. Although the events are different in the sense that individuals do not electively choose to be in a motor vehicle crash as they would choose to receive a deep sedation or GA in a dental office. It does lend perspective on the safety profile of dental anaesthesia as compared to events that individuals often fear. It could be argued that based on this evidence, there is more risk in driving to the dental office to receive treatment than receiving a deep sedation or GA at the appointment. 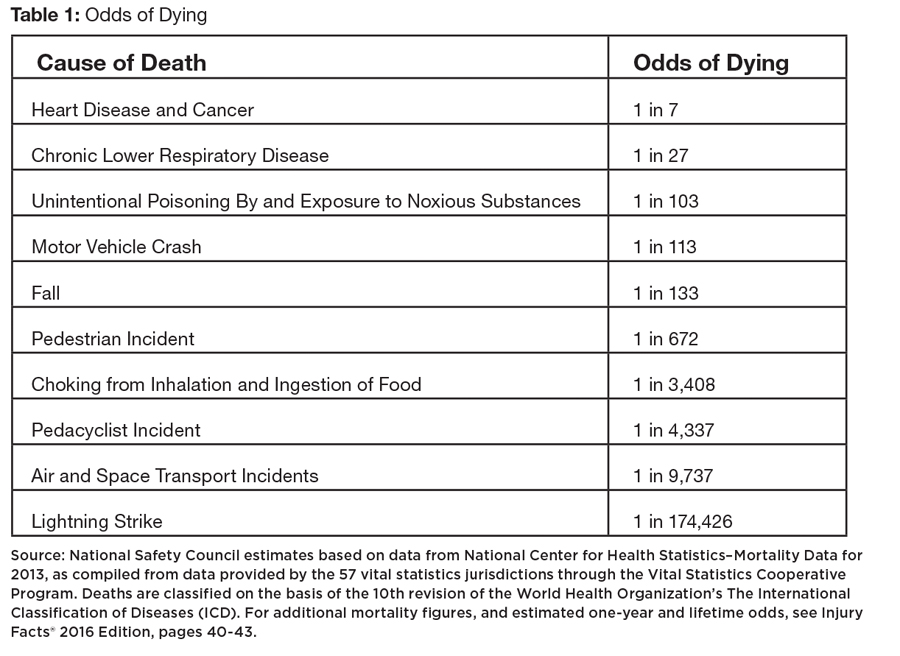 In summary, although the studies on mortality for deep sedation and GA in the dental office have their limitations, the published rates are low. The evidence in the literature supports that the practice of anaesthesia within the dental setting is safe. The data for both Ontario and Canada should be updated to give a more current estimate of mortality. It would be reasonable to anticipate that the results would be similar to those already published in the literature since there was little disparity between those rates. Furthermore, the developments in monitoring techniques and sedation guidelines would suggest that the current mortality rate could be lower than those rates already published. OH

Alia El-Mowafy attended the Bachelor of Science programme at York University majoring in Psychology and Kinesiology. She went on to complete her degree in Dentistry at Future University in Egypt. She is a MSc candidate in Dental Anaesthesiology at the University of Toronto.