Dentists who complete the 15 question quiz in the November, 2001 issue of Oral Health may be eligible to receive continuing education points. The names and license numbers of all who complete the quiz will be forwarded to their respective provincial licensing authorities.

Which of the following luting agents is the most soluble?

An ideal luting agent should be biocompatible, inhibit plaque, and resist microleakage. It should also be impervious to oral fluids, have low shrinkage, and offer good adhesive retention.

Of the four cements listed, polycarboxylate is the most soluble and the least retentive. Polycarboxylates are, however, biocompatible and readily bond chemically to natural tooth substance.

A recent study which examined the retention values of the above demonstrated, in descending order, adhesive resin (highest value), glass ionomer, zinc oxyphosphate and polycarboxylate.

Retention of crowns and bridges is affected by film thickness of the luting agent, which in turn is influenced by the seating force as well as the mixing technique. Dynamic seating methods are recommended over static methods of loading when placing the restoration. Ultrasonic vibration also can improve the seating method, but care must be taken not to prolong such action.

In the treatment of periodontal pockets by guided tissue regeneration, which of the following applies/apply?

1) The exposed root may be treated with citric acid.

3) Debridement of the defect is essential.

4) The pocket should be single-walled and not more than 5 mm in depth.

Guided tissue regeneration (GTR) is a technique introduced in 1986 by Nyman. The aim of the technique is to allow regeneration of fibroblastic attachment to the tooth root and to induce osteoblastic reformation of the bony socket while at the same time preventing downgrowth of epithelial cells from the crevice and attached gingiva. The size of the bony defect does not contraindicate treatment. Thorough access, debridement, and removal of toxic non-vital root cementum is a prerequisite. This may include the use of citric acid treatment of the root. Since fibroblast and osteoblast regeneration take up to six weeks for the reformation of new periodontal membrane and alveolar bone, Goretex membranes must remain in place as a barrier to epithelial cell invasion for approximately 6-8 weeks. During this time, the patient must refrain from mechanical hygiene methods to keep the area plaque free. Instead, Peridex mouthrinses two to three times a day are advocated, along with antibiotic coverage for three weeks, e.g., doxycycline 100 mg qid. After six to eight weeks, the area is reentered surgically, the Goretex membranes removed carefully, and the flaps closed.

A recent study (1999) demonstrated the effectiveness of this method of treatment on abutment teeth required for fixed partial dentures. The study follow-up of 4-8 years showed evidence of one third more bone support and reduced pocket depth as well as improved clinical attachment.

In a study comparing resorbable and non-resorbable membranes (1997), no significant differences could be demonstrated in the treatment results of vertical intrabony defects. It should be noted, however, that in a more recent study (1999), adverse effects consistent with a foreign body reaction were observed in patients treated with resorbable GTR devices.

Glass ionomer cements have properties excellent for restorative care, including a coefficient of thermal expansion similar to that of natural tooth structure. They bond both physically and chemically to enamel and dentin and can release fluoride. They have been shown to reduce bacteria at restoration sites, and have demonstrated ability to promote increased fluoride uptake in adjacent tooth structure.

A recent study of Class II restorations compared resin-modified glass ionomer cements to conventional amalgam. At six-month, one-year, two-year, and three-year recalls, restorations were examined. Statistically, no differences were shown between the materials with respect to fracture or sensitivity. There was, however, less demineralization at the cavity margins in the teeth restored with RMGIC.

Another study of Class II restorations comparing composite resins, fluoridated and non-fluoridated, with RMGIC, has shown that the surfaces of teeth adjacent to the RMGIC were less demineralized.

When would you advocate the removal of mandibular third molars which are asymptomatic?

1) To reduce crowding of incisors.

2) When in an abnormal position with no evidence of pathosis.

3) To reduce the risk of periodontal disease.

4) To facilitate development of the basal skeletal components of the mandible.

E. None of the above

A recent conference of the American Association of Oral and Maxillofacial Surgeons came to some interesting conclusions.

Crowding of incisors is multifactorial. Decreased arch length, tooth size and shape, retrusion of incisors, as well as growth changes in adolescents are all potential causes. There is no evidence that incisor crowding is caused by third molars.

No evidence exists to suggest that the third molars are needed for development of the basal skeletal components of the maxilla or the mandible.

No consensus was reached on removal of asymptomatic impacted teeth where no evidence of pathosis existed.

It is important, before recommending removal of third molars, to determine the future effects that such removal may cause, namely orthodontic, periodontic or prosthodontic problems. No evidence exists that removal will enhance the periodontal status.

If, however, pathosis exists and extraction is indicated, third molars should be removed in young adulthood rather than later. With respect to the mandibular third molar, the best general approach would appear to suggest removal before age 22. After age 22, the best strategy is to examine the patient periodically, removing only symptomatic teeth or those with evidence of pathosis after fully informing the patient of all relevant risks and benefits. 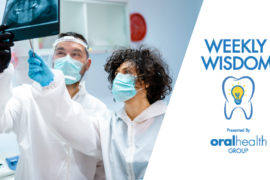