May 2, 2017
by Marina Polonsky, DDS, MSc Lasers in Dentistry

Abstract
Endodontic therapy for teeth diagnosed with irreversible pulpitis has been in use for many years, and continues to be the standard of care in the dental practice. In simple cases, where mechanical instrumentation and chemical irrigation can achieve sufficient cleaning and disinfection, endodontic treatment is reported to be as high as 96% successful. However, in cases where root canal systems are more complex, proper cleaning of the organic debris, removal of smear layer and disinfection, has proven to be a challenge. Long-standing chronic periapical lesions and complex root canal anatomy, examples of which include the presence of isthmus, apical deltas and lateral canals, the predictability of successful endodontic therapy is significantly reduced. Lasers of different wavelengths have been shown to be useful in improving disinfection and smear layer removal in more complicated endodontic cases. In this article, we describe a case of laser-assisted endodontic therapy of a lower premolar exhibiting radiographic evidence of internal cervical resorption and clinical symptoms of irreversible pulpitis. The case was recommended for extraction following endodontic consultation, as there was suspected buccal root perforation. Conventional mechanical instrumentation was performed, followed by a dual wavelength protocol utilizing the Er,Cr:YSGG 2780nm laser for smear layer removal and the diode 940nm laser for deeper disinfection of the dentinal tubules. Conventional chemical irrigants, such as NaOCl and EDTA, were not used due to suspected buccal perforation and the possibility of chemical extrusion outside the root and into the surrounding tissues. The protocol was successful and three-year radiographic follow-up is presented as evidence.

Introduction
It is well known that long-term success and predictability of root canal therapy is dependent on the presence, or absence, of infection and our ability to disinfect and seal all the main and accessory canals three-dimensionally. Prognosis for endodontic therapy in teeth with apical periodontitis is 10-15% lower than for teeth without periapical lesion. 1,2 Once the tooth becomes infected, it becomes very difficult to completely eliminate the bacteria from the three-dimensional network of complicated root canal systems. 3 Several pigmented endodontic pathogens, such as P. gingivalis, P. endodontalis, P. intermedia and P. nigrescens, have been found to persist after proper instrumentation of the canals, and are responsible for failure of endodontic therapy. 4 Smear layer produced during mechanical instrumentation, with either rotary or hand files, reduces permeability of intra-canal irrigants, like NaOCl(sodium hypochlorite) and CHX(chlorhexidine) by 25-49%. 5 Hence, anti-bacterial rinsing solutions can only reach the bacteria to a depth of 100mm into the depth of the dentinal tubules. 6 However, microorganisms such as E. faecalis have been found as deep as 800-1100mm. 7,8

In the recent years, different laser wavelengths have been shown to be advantageous for deeper penetration of dentinal tubules, compared with chemical irrigants 9,10 and therefore, for better bactericidal effect. 11,12 The Er,Cr:YSGG laser system has been shown to eradicate E. faecalis and E.Coli to undetectable levels, with average temperature rise at the root surface of only 2.7-3.2oC, depending on the power used. 13 Complete smear layer removal has been shown by both the Er,Cr:YSGG 2780nm and the Er:YAG 2940nm laser systems, due to induction of shock waves in aqueous solutions (water, EDTA) inside the root canals. 14,15 Although EDTA by itself is effective in smear layer removal in straight large canals, its effectiveness is improved by laser activation in small curved canals. 16,17

The clinical case presented here describes a successful endodontic treatment of a lower premolar, which exhibited radiographic signs of internal resorption and a buccal perforation. This microscope observation by an endodontist suggested a hopeless prognosis for the tooth and, hence, the recommended extraction. We utilized a Er,Cr:YSGG wavelength for removal of organic debris and smear layer, followed by a diode 940nm wavelength, known for its ability to penetrate deep into the tubules and disinfect. In this case, the use of NaOCl, and likely hypochlorite extravasation into the periodontal ligament in the area of buccal perforation had to be avoided.

Case Report
A 52-year-old male presented to the dental office for a routine prophylaxis appointment, in December 2013, and was clinically diagnosed with interproximal decay on the distal surface of lower right second premolar (tooth 45). A closer radiographic examination revealed an area of internal resorption in close proximity to the decay (Fig. 1). A composite resin restoration was completed without pulp exposure, but close proximity to the area of internal resorption was explained to the patient. In case of an onset of symptoms of irreversible pulpitis, the patient was instructed to contact the office immediately. Two months later, in February 2014, the patient contacted the office complaining of lingering cold sensitivity and was referred to the endodontist for consultation regarding feasibility of root canal therapy. The endodontist report indicated that buccal perforation was observed and prognosis was deemed to be hopeless (Fig. 2). Recommended treatment was extraction of the tooth and implant placement. 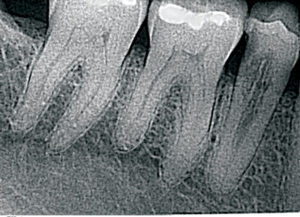 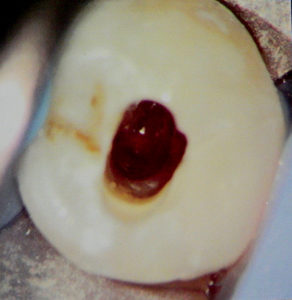 Upon the patient’s return to the office in March 2014 for possible extraction, the use of lasers in endodontics to help with extremely compromised cases 18,19 was explained, and the patient consented to try laser-assisted endodontic treatment. Inferior alveolar nerve block was administered using 4% Articaine 1:200,000 Epi. The tooth was accessed following removal of the temporary filling placed by the endodontist. Working length was measured to be 20mm. Mechanical instrumentation of the canal was completed using Sybron TF adaptive reciprocating motor system up to file ML2 corresponding to ISO 35 size master file. FileEze (Ultradent, South Jordan,UT, USA) was used for file lubricant and BioPure MTAD (Mixture of tetracycline isomer, citric acid and detergent) by Dentsply Tulsa Dental Specialties, Tulsa, Okla.,USA was chosen as the intra-canal irrigation, since the presence of buccal perforation contra-indicated the use of NaOCl or EDTA. Before final obturation, dual wavelength laser cleaning and disinfection protocol was performed.

Following the laser protocol, the canal was filled with hydrophilic EndoRez UDMA (urethane dimethacrylate) resin based, self-priming endodontic sealer (Ultradent, South Jordan, UT, USA) to the level of the CEJ (cementum-enamel junction). Gutta-Core #30 (Dentsply, Tulsa Dental Specialties) softened gutta percha carrier was used to complete the obturation. The tooth was permanently restored with resin restoration (FutureBond DC bonding agent and GrandioSO nanohybrid composite resin by Voco, Germany) immediately following obturation (Fig. 3). The patient was instructed to inform the office should any pain or discomfort persist past first two to three days following the endodontic therapy. He returned in three months for a routine follow-up and reported only minor discomfort for the first two to three days, which quickly subsided, with the tooth feeling “normal” ever since. Post-op radiographs were taken at 3, 9, 24 and 36 months after the completion of the laser-assisted endodontic treatment (Figs. 4-8). The tooth remains asymptomatic and functional. 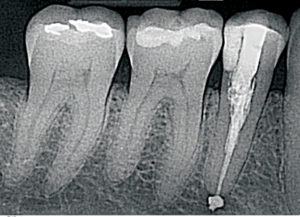 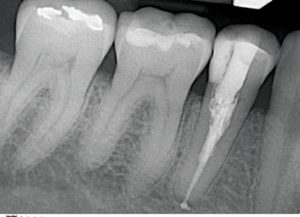 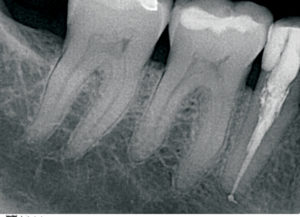 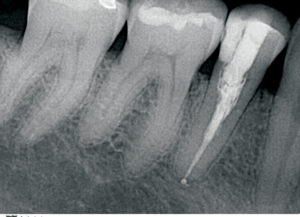 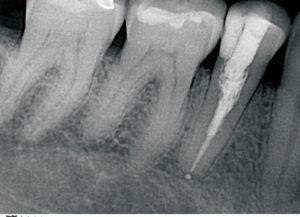 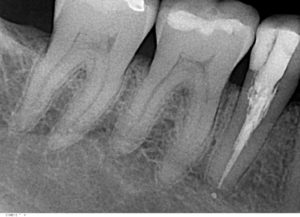 Discussion
The three-year success of this complicated case can be attributed to a number of clinical decisions: 1. The timely intervention at the irreversible pulpitis stage and before the onset of peri-apical infection and bacterial colonization. 1,2 2. The effectiveness of the Er,Cr:YSGG laser system in three-dimensional removal of organic debris and smear layer from the extensive internal resorption network of canals. 13-16 3. The ability of the 940nm diode wavelength to penetrate deep into the tubular dentin to help dry the internal structure of resorption network and target pigmented bacteria, due to its high absorption in melanin and hemoglobin. 20 4. The hydrophilic and biocompatible nature of a UDMA resin sealer like EndoRez, which is well tolerated by periapical tissues in case of overfill or extrusion. 21-23

It has been shown that bacterial contamination of the root canal system, presence of necrotic tissue and bacterial colonies deep inside the dentinal tubules (as far as 1.1mm) 24 are the main contributing factors to the long-term failure of endodontic therapy. Performing a root canal treatment prior to onset of deep bacterial colonization is a valuable service we can provide to our patients, to ensure long-term success. Unfortunately, early intervention is not always possible. As well, the difficult three-dimensional anatomy of the canal systems, such as internal resorption network, also makes it difficult to achieve complete debridement and disinfection of the entire surface area of the root canal walls and into the depth of the tubules. Laser systems, such as the 2780nm Er,Cr:YSGG and the 940nm diode, add an advantage to the traditional mechanical debridement and chemical disinfection. The Er,Cr:YSGG laser is a free-running pulsed laser with a high absorption in hydroxyapatite (HA) and water (OH- radical to be more precise). Activation of aqueous solutions, such as water and EDTA, with this laser creates cavitation effects and shock waves responsible for debris and smear layer removal inside the root canal. Open dentinal tubules then allow laser light conduction and effective disinfection as far as 500mm deep into the tubules with this 2780nm laser system alone. 25 To achieve an even greater penetration of laser energy, and accompanying bactericidal effect, the addition of second wavelength, like the 940nm diode, offers extra benefit. Diode lasers have deeper penetration in dentin 26,27; their high absorption in melanin and hemoglobin allows for selective killing of pigmented and pigment producing bacteria, which make up the majority of endodontic infections. 4 A recent study has shown that dual wavelength protocol (2780nm with 940nm) is safe and does not result in adverse temperature changes on the external root canal surface in vitro. 28 Temperature rise was recorded to be 5oC to 7oC depending on the thickness of the dentinal wall. Continuous movement of the laser tip inside the canal and distilled water irrigation, between laser exposures, ensures control of temperature rise. The cooling effects of blood circulation should make this protocol even safer in vivo. Lastly, the sealer chosen to complete the endodontic obturation is also of great importance to the long-term success of complicated cases involving possible perforations and/or open apices. Extrusion of EndoRez sealer past the apex has been shown to be well tolerated by periapical tissues and does not interfere with normal bone healing. 22,23 Owing to its hydrophilic nature, good flow and wetting characteristics 21, it is ideal for the filling of the complex internal resorption network of canals, especially since complete dryness inside the tooth cannot be accomplished with the use of paper points, and possibly even diode laser irradiation. It has even been suggested that EndoRez increased the fracture resistance of the endodontically treated roots to internally generated stresses. 29

Conclusion
The three-year success of this clinical case may be an indication that laser systems, such as the Er,Cr:YSGG (IPlus by Biolase) and 940nm diode (Epic 10 by Biolase), can be beneficial
additional tools in the treatment of extremely complicated endodontic cases, otherwise doomed for extraction. The possible presence of buccal perforation, in this case of internal cervical resorption, contra-indicated the use of conventional irrigants, such as NaOCl and EDTA, due to the likely occurrence of a painful hypochlorite accident in the periodontal tissues. An inability of conventional hand or rotary files to completely remove organic material from such a complex resorption system was another reason for recommended extraction for this premolar tooth. The lasers’ ability to remove debris and smear layer with acoustic shockwaves and the great bactericidal effect30, due to deep penetration and pigment affinity, helped us treat this case in a conservative, non-surgical manner and without the use of potentially harmful chemical irrigants. OH

Acknowledgements
Thank you Dr. Thompson of Capital Endodontics in Ottawa, ON, Canada for providing pre-op photo of internal resorption.