The retrieval of a broken dental needle demands a detailed knowledge of the relevant anatomy and the application of a meticulous surgical technique. These factors are emphasized in the following article.

Case Report
Our oral surgery office received a phone call from a dental office regarding a needle that broke off at the hub while performing an inferior alveolar nerve block. A 17-year-old male was attending his dentist’s office for routine restorative care in quadrant 3 when the event occurred. The needle used was a 27 gauge long. The details of exactly how the needle fractured are otherwise unknown. During the phone conversation the dentist explained that he had attempted to retrieve the needle utilizing a small incision but was not successful in locating it. The referring dentist had panoramic and cone beam (CBCT) imaging nicely showing the location of the needle (Fig. 1). The CBCT could be manipulated in 3D video like fashion to get good detail of its location from many angles.

a) Panoramic and b) Cone beam slice showing needle location. 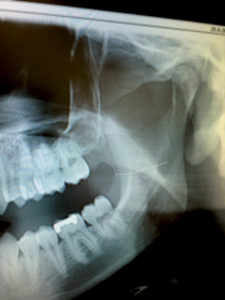 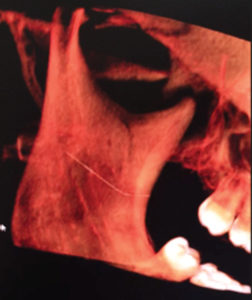 At presentation to the oral surgery office the young patient was found to be an otherwise healthy teenager and in no distress although he preferred to have the needle removed if possible. Further anesthetic was given to reinforce the existing block.

Surgical Access Options
In this case access to the pterygomandibular space was gained from the medial side – i.e. through the mucosal surface medial to the ramus starting just medial to where the injection point started. A small horizontal incision was made oriented along the presumed orientation of the needle and extended posteriorly. Once in the submucosal plane, blunt soft tissue dissection was performed at 90 degrees to the incision and therefore to the needle. Eventually deep in the medial pterygoid musculature the needle was encountered, first by feel then visually and removed. The needle is depicted in Figure 2. There is a bend in the needle about one-third of the distance from the hub end. This was appreciated from the imaging sent along. It was not possible to tell if there had been an additional intentional bend at the hub, which is a technique employed by some dentists. In any event the needle was broken at the hub. 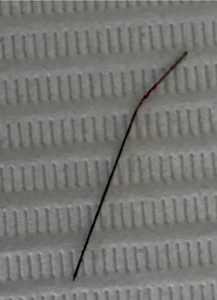 The other approach that could be considered would be from the lateral aspect. This would be achieved by making a subperiosteal incision along the ascending ramus and raising a full thickens flap on the medial aspect of the ramus. This would necessarily involve stripping the temporalis tendon. This is the same approach that is used when performing a saggital ramus osteotomy. Once this is elevated dissection would follow through the periosteum with a small periosteal incision and heading in a medial direction with then blunt dissection similar to that performed from the medial. My expectation is that this is less direct than the medial approach as you can usually see where the needle entered the mucosa and more closely approximate your dissection from the medial. The lingual nerve is also more likely to be close to the immediate subperiosteal plane than the submucosal plane in this region.

Caution for Anatomic Structures in this Area
The main concern dissecting in this region is that for the lingual nerve. Figure 3 depicts the relevant anatomy of this area. 1 As we all know this nerve is anesthetized when we deposit solution as we slowly retract the needle out of its primary position at the entrance of the IAN into its foramen. After the lingual nerve separates from the main trunk of the third division of the trigeminal nerve it passes directly through this space and passes very closely to the periosteum lingual to the third molar region. This is exactly why care must be taken not to go through the lingual cortical bone in sectioning an impacted lower third molar for removal. So in approaching the medial side of the ramus through mucosa blunt dissection is carried out to avoid cutting this nerve if encountered. At the same time one must be constantly on the lookout for the nerve during this dissection. My expectation is that keeping your dissection as anterior as possible offers the least amount of risk to injuring this nerve. 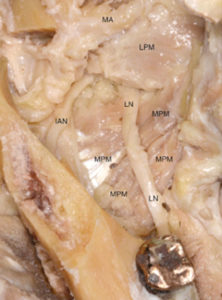 Once the needle was removed a few resorbable sutures were placed and the patient went on his way and recovered fully.

Etiology of Broken Needles
When one considers how many inferior alveolar nerve blocks are administered even on a daily basis in North America, the number of broken needle incidents must be extremely low. The literature contains many case reports and I expect most cases go unreported. 2-5 We really have no idea how frequent an occurrence this is. The needle usually remains in the pterygomandibular space but has been diagnosed in more perplexing locations. 6,7 Needles of any size should not break during normal usage. Intuitively one would think that a larger gauge needle has less chance of breakage just due to strength of the steel. Also, if a short needle is used for an IAN block it is basically buried in tissue up to the hub and should the patient make an inadvertent quick move it seems to me that needle breakage is more likely and retrieval more difficult with no needle protruding form the mucosal entrance point. However many practitioners like to bend or curve the needle before insertion. Some people claim this increases the chance of breakage. In this particular case there was a bend in the needle but no breakage occurred at the site. Whether or not there was a bend at the hub where it obviously broke we do not know. Curving the needle is done so as to reach laterally as the needle is passed posteriorly to the area of the mandibular foramen. This would preclude one from having to do more of a cross mouth technique. This allows for more accurate needle positioning for those individuals who may have that shape of ramus that flares laterally is it extends posteriorly. As well for posterior superior alveolar nerve blocks this allows the needle to more closely follow the curve of the posterior maxilla and placement of the needle tip closer to those foramina as these nerves enter the maxillary bone. My personal thought is that a curved needle may represent the safest way to adapt your needle to accommodate this anatomy in both the maxilla and mandible as opposed to an acute bend. Figure 4 shows this difference. The curve will put less of a stress point in the metal as opposed to a sharp acute bend. However, this is purely opinion and there has been no definitive study to demonstrate an identified etiology for needle breakage based on bending a needle in one particular fashion or another. OH 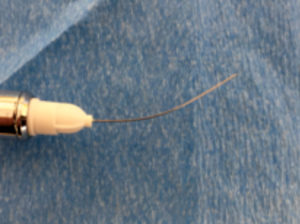 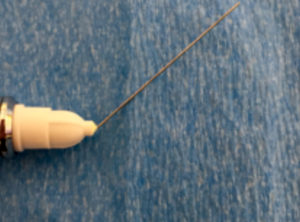 Archie Morrison is the Assistant Professor of Oral and Maxillofacial Surgery at Dalhousie University and the Capital District Health Authority Halifax, NS (retired). He is currently working in private practice at Citadel Oral and Facial Surgery, Halifax, NS. 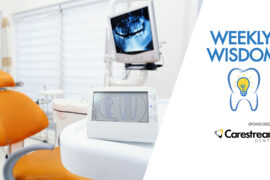