Thorough disinfection has always been problematic in all areas of healthcare, especially in the oral environment. In endodontics, laser energy has been used in the past in an attempt to aid in the disinfection and/or irrigation of root canal systems with less than desirable results. Some of the various techniques used in the past included using high powered laser energy to heat up the irrigating solution or using laser energy with exogenous chromophores (solutions) as photodynamic therapy to enhance the disinfection process. However, the outcomes were disappointing and created unwanted side effects. Following this, it was discovered that Erbium Lasers, because of their high absorption in water, could create shockwaves through the near-instant vaporization of the irrigants and that these vapor bubbles would propagate throughout the canal system in three dimensions. Er:YAG (Versawave, Hoya Con Bio; Fremont, CA USA) and Er:CrYSGG (Waterlase, Biolase, Irvine, CA USA) Lasers inserted into the canals from 1mm to 4mm from the apex resulted in better debris removal in simulated canal irregularities than PUI (passive ultrasonic irrigation); however, navigation of the canals with quartz fibers was difficult and the standard Pulse Forming Network (PFN) of these system delivered the energy relatively slowly such that higher energies were needed, which could be problematic, and with the tip so close to the apex, there was a potential for apical extrusion.

Over a decade ago the concept of using very low laser energy (less than 25 millijoules) created by an Erbium Yttrium Aluminum Garnet (Er:YAG) laser (Fotona LightWalker, Ljubljana, Slovenia) with its 2,940 nanometer (nm) wavelength, which has the highest absorption in water, was investigated. Research demonstrated that using an advanced Er:YAG laser that could be digitally pulsed and produce super short pulses of 50 microseconds (µsec) enabled laser activated irrigation (LAI) to be achieved while keeping the Laser in the access prep without the need to navigate the canals with the tip. This short digital pulse with low energies provided safe and profound irrigation that was producing effective debridement and deep disinfection of the root canal system (Images 3 and 4).

In 2011, the Journal of Endodontics published a study showing the complete disinfection of the entire root canal system with photon-initiated photoacoustic streaming with the Er:YAG 2940nm laser (Fotona LightWalker, Ljubljana, Slovenia). The study demonstrated the expansion and almost immediate contraction of the extremely tiny vapor bubbles produced by a series of single digitally-produced square 50 µsec pulses in the irrigating solutions. This produced the appropriate fluid mechanics that are 10 times faster than PUI and work at a distance of up to 20mm from the laser tip compared to 1-2mm for PUI. This study showed near complete disinfection and debridement of the entire root canal system. Not only were the curved and irregularly shaped canals cleaned and disinfected, but, additionally, the accessory canals and anastomoses between the canals as well. Once the entire root canal system has been cleaned and disinfected by this method, a very thin endodontic sealer is used to properly obturate the endodontic system (see image 1). 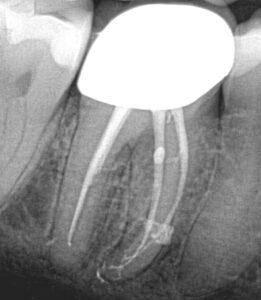 Brewster, SWEEPS ENDO #30 radiograph: Post-0perative radiograph of the lower right 1st molar demonstrating the complete cleaning and disinfection accomplished with SWEEPS with the LightWalker Laser (Fotona). Notice the obturation of the accessory canals and the anastomoses between the canals that were not instrumented. 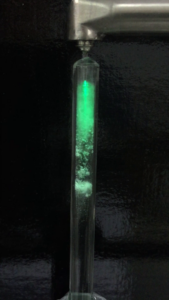 SWEEPS Photoacoustic Streaming of irrigants in Tube1: Image demonstrates the action of the Double Bubble (SWEEPS) activity in a glass tube. 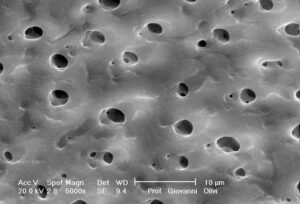 SEM 6mm form Apex: SEM at 5000x of canal wall 6mm from the apex extracted tooth treated with SWEEPS. Notice the complete removal of the smear layer, the open dentine tubules, and the absence of bacteria and organic debris. (Image courtesy of Dr. Giovanni Olivi) 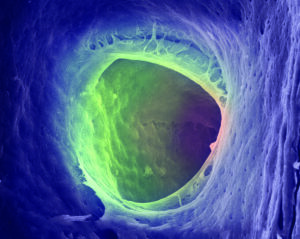 SEM of Dentine Tubule: SEM of a single dentine tubule treated with SWEEPS. Notice completely clear lumen and the absence of bacteria and organic debris.

The extremely short pulse of these digital systems is critical to the Lasers ability for the instantaneous creation of the vapor bubble (see image 2) and aids in the necessary propagation of these acoustic waves emanating from the low energy laser pulses to produce multi-directional streaming of the disinfecting solutions more effectively across the root canal system.

The American Association of Endodontics 2012 Position Statement on Use of Lasers in Dentistry stated that the propagation of acoustic waves emanating from a pulsed-low laser energy emanating from photon-initiated photoacoustic streaming laser may aid in distributing disinfecting solutions more effectively across the root canal system and be an effective adjunct to conventional endodontic procedures.

This digital pulsing technology has recently been further enhanced to produce an even smaller ultra-short pulse of 25 µsec and fabricate an advanced compounded pulse configuration referred to as an Adaptive Structured Pulse (ASP). With this technology, (Fotona Lightwalker and Fotona SkyPulse, Ljubljana, Slovenia) (Images 5 and 6) amplified pressure waves travelling at supersonic speeds can be created in root canals during laser endodontic procedures using the new SWEEPS Er:YAG laser modality. These advanced ASP pulses provide the temporal double bubble modality, which causes accelerated collapse of laser-induced bubbles in the irrigation liquid, leading to enhanced shockwave emission. This is referred to as Shock Wave Enhanced Emission Photoacoustic Streaming (SWEEPS™) (Image 7). 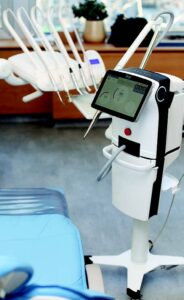 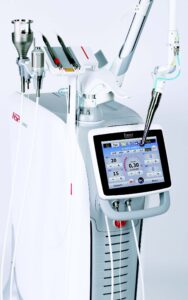 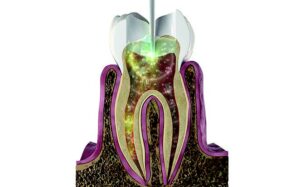 SWEEPS Endodontic Irrigation: Laser debrides entire canal system in three dimensions with the tip only in the access prep.

The use of the double bubble LAI technique is safe and more efficient than previous techniques in the removal of the bioﬁlm, smear layer, and remaining ﬁlling materials even in the narrowest of canals and anastomoses. Because the laser tip is able to stay in the access preparation, LAI can be effectively utilized at all stages of endodontic therapy from beginning to end to locate canals, dislodge separated files, and navigate calcified canals. Complex anatomies can be more easily treated and treatment time can be reduced by up to 40%.

The use of digitally produced LAI is also enhancing the clinician’s ability with water to flush debris and pathogens in several other modern procedures. LAI in the periodontal pocket as part of scaling and root planing procedures is an ideal adjunctive step to assist in creating an environment to help facilitate the reattachment of the soft tissue to the root structure.

LAI with water as the irrigating solution assists in the decontamination of extraction sockets providing as close to an ideal environment as possible for bone grafting and healing while augmenting the angiogenesis process.

Additionally, a similar LAI technique can be performed in the osteotomy preparation for implants removing the smear layer to promote and accelerate the desired osseous integration.

The use of photobiomodulation therapy (PBM), which is the use of low-level light or laser energy, will further enhance the tissue response for all of these procedures and help accelerate the healing process.

With the appropriate training, and the correct laser and protocols, laser activated irrigation has been shown to be extremely safe and easily performed with shorter and fewer appointments, and accomplishes the near-complete disinfection of the entire root canal system in three dimensions while being less invasive, leaving more tooth structure intact for longer lasting restorations. Additionally, the use of SWEEPS irrigation has beneficial applications in disinfecting periodontal pockets, extraction sites, implant osteotomies, and treating peri-implantitis.

Dr. Brewster is in Private General Dental Practice, in Dallas, TX. He is a past member of Board of Directors Academy of Laser Dentistry (ALD) and Chair of ALD Regulatory Affairs Committee.