Introduction
Temporal space abscesses are rare deep neck infections1 that can easily create challenges in diagnosis. Early presenting symptoms of persistent and unrelenting facial pain and trismus have been misdiagnosed as temporomandibular joint dysfunction,2,3,4,5 parotitis,2,3,5,6 trigeminal neuralgia5,7 and diabetic neuropathy in uncontrolled diabetes.5 A temporal space abscess caused by a neck abscess from an attempted injection into the external jugular vein by an intravenous drug user, was initially mistaken as a dental infection.8 We report a case of temporal space abscess misdiagnosed as temporal arteritis.

Case Report
A 51-year-old Caucasian male presented to the Emergency Department of the Sault Area Hospital on the June 19, 2017 with a complaint of right facial edema and pain. A diagnosis of facial cellulitis that was non-trauma or dentally related, was made. The patient was then referred to General Surgery for a temporal artery biopsy which was performed on June 27, 2017. His WBC at the time of the biopsy was 7.1 and blood sugar was 20.0. The biopsy report showed no evidence of giant cell arteritis. Axial CT scans of the head and neck reported a periapical dental abscess of the right mandible extending superficially into the right masticator space, with further extension into the right temporal frontal parietal scalp. There were also multiple locules of gas with peripheral rim enhancement (Figs. 1-4). The patient presented again to the Emergency Department on July 18, 2017 with continued intense pain in the right face and now noticeable swelling of the right side of his head. A consult was requested from Oral and Maxillofacial Surgery. The patient did not admit to any previous toothaches or dysphagia. His past medical history included Type 2 diabetes mellitus on insulin, CABG (2012), silent MI (2012), and previous arterial embolism and thrombosis of the right lower extremity. He was a one-pack per day smoker for 30 years. His medications included Lantus, Novorapid insulin, Pregabalin, Ramipril, ASA 81 mg, Lipitor, Rabeprazole, Naproxen and Tylenol #3. On clinical examination, the patient did not present in acute distress. There was massive, fluctuant swelling of the right temporal area (Figs. 6 & 7). Intraoral examination showed trismus to 25 mm. There was evidence of purulence exuding from around tooth #47. There was no swelling in the submandibular, sublingual or lateral pharyngeal spaces. The uvula was midline. His oral health showed a very poor dentition and oral hygiene. His WBC was 9.4 and blood sugar was 21.4 on admission. A diagnosis of right temporal space abscess secondary to an abscessed tooth #47 was made. The patient was admitted to hospital and started on Clindamycin 600 mg Q8H intravenously. The patient was then taken to the operating room where he underwent an aspiration and extraoral temporal incision and drainage of the right temporal space abscess from above the zygomatic arch (Figs. 8 & 9). This was productive for copious amounts of mucopurulence and swabs were sent for Gram stain culture and sensitivity. Tooth #47 was removed and the lateral pharyngeal and infratemporal spaces were explored intraorally. The submasseteric and pterygomandibular spaces were explored extraorally at the external angle of the mandible. He continued to drain significant amount of pus from the temporal incision postoperatively, and his WBC was 10.1 on the following day (July 19, 2017). He continued to improve on the second postoperative day (July 20, 2017) with a WBC of 8.7. The penrose drains were removed and the patient discharged home on oral Clindamycin 600mg TID. The results of the Gram stain culture and sensitivity showed isolation of mixed gram-positive bacilli and mixed gram-positive cocci, with no predominant organisms. He was followed in the office for several weeks postoperatively and he continued to drain significant amounts of pus until the wound eventually closed. The panorex taken in the office showed a large dentigerous cyst associated with a deeply impacted tooth #48 that was displaced into the mid-ramus area. The extraction socket of tooth #47 was also evident (Fig. 5). Four months after initial presentation, he had the dentigerous cyst excised and the impacted tooth #48 removed uneventfully under hospital general anaesthesia. His oral hygiene and dentition remained in poor condition, but he declined any further treatment and was discharged from our care. 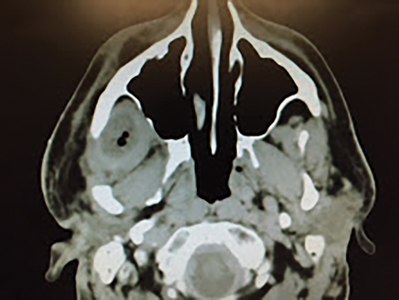 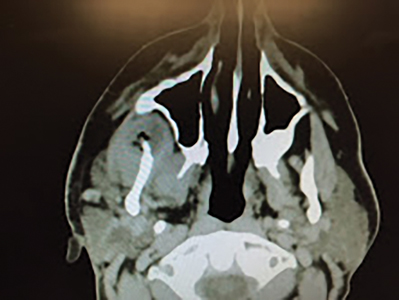 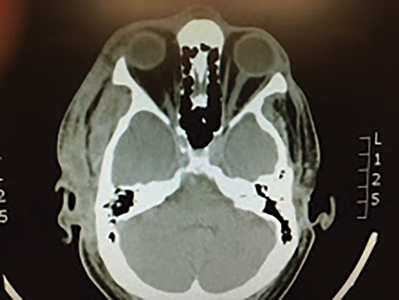 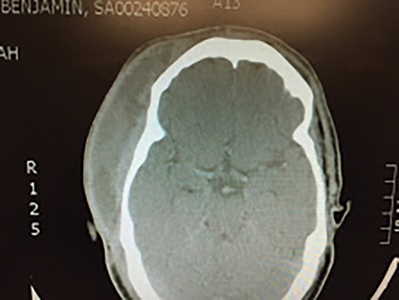 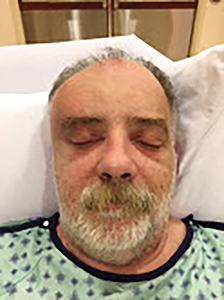 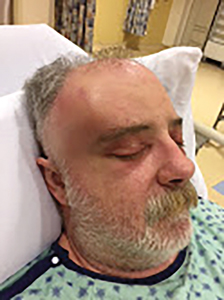 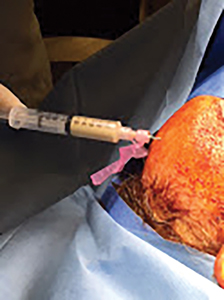 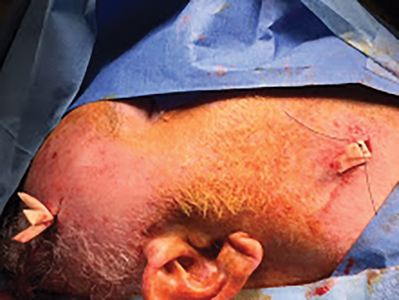 Discussion
The masticator space is formed by the splitting of the superficial layer of the deep cervical fascia at the inferior border of the mandible to envelope the muscles of mastication. Laterally, the fascia becomes the parotideomasseteric fascia over the masseter muscle and fuses with the periosteum over the zygomatic arch. Superiorly, it continues over the temporalis muscle as the temporalis fascia and terminates with its muscle insertion on the cranium. Medially, the fascia covers the medial surface of the medial pterygoid muscle and terminates at the muscle attachment to the pterygoid plates and sphenoid bone. This fascial envelope and the surface of the cranium medially, forms the masticator space. There are four compartments that are potential fascial spaces which include the submasseteric space, the pterygomandibular space, the superficial temporal space and the deep temporal space. The zygomatic arch separates the submasseteric space from the superficial temporal space. The lateral pterygoid muscle separates the pterygomandibular space from the deep temporal space.9 Since all these spaces communicate with each other, oral bacterial infections can spread and cause abscesses in multiple deep fascial spaces of the neck. A buccal space abscess can extend into the submasseteric space and then superiorly to the superficial temporal space. A submandibular or sublingual space abscess can extend into the pterygomandibular space, then into the deep temporal space. Yonetsu et al.10 in a study of 45 deep fascial space infections showed that only 10/38 (26%) mandibular infections spread to the temporal spaces, while 7/7 (100%) maxillary infections all extended to the temporal spaces. The superior extension of infection has been suggested due to the vertical orientation of fascial layers in the masticator space. A submasseteric pathway for abscess extension against gravity, aided by mastication forces, is a likely explanation.11

The essential feature of a masticator space infection is trismus. If trismus is not evident, these spaces are unlikely to be involved. The only exception would be the immunocompromised patient who may not exhibit classic signs of inflammation of a deep space infection. Swelling may not always be present in a masticator space infection especially if limited to the submasseteric space.23 However, should the superficial and deep temporal spaces become involved in rare instances, swelling may be evident in the temporal areas, superior to the zygomatic arch and posterior to the lateral orbital rim. Because of the tight attachment of the deep cervical fascia to the zygomatic arch, a temporal space infection along with a submasseteric space infection, can present as a hourglass shape on frontal view.9

Contrast-enhanced CT (CECT) is considered the preferred and most accurate imaging for deep neck infections. CECT will show the hypervascular capsule that surrounds an established pus cavity as ring enhancement and irregularity (scalloping) of the abscess wall.24,25 The presence of gas in the affect soft tissues is a frequent occurrence on CT scans which may strongly indicate a necrotizing infection form of bacteria, requiring immediate and aggressive treatment.1

The standard surgical management of the temporal space abscess requires extraoral temporal incision and aggressive exploration of all possible involved fascial spaces, including the superficial and deep spaces.26 Submasseteric and pterygomandibular spaces can be explored from a submandibular access at the external angle of the mandible.1 Intraoral access to the submasseteric and pterygomandibular spaces is recommended through an incision along the pterygomandibular raphe, although more technically difficult and less prudent.23 Endoscopic drainage of an infratemporal fossa abscess through a transmaxillary access, has been reported to be successful.27 More recently, mandibular coronoidectomy from an intraoral vertical incision over the pterygomandibular raphe and the placement of drains originating from the extraoral temporal incision, with one exiting intraorally and the other exiting through a submandibular incision, was reported to show significantly better therapeutic effects on patients with infratemporal fossa abscess.28

Conclusion
Infratemporal and temporal space infections are rare and not commonly seen by dentists or emergency physicians. Therefore, it is quite likely that a misdiagnosis can occur. This requires a careful dental and medical history, with a thorough oral, facial, systemic and radiologic examination. A high level of suspicion for deep neck infections should always be entertained. We report a case of a temporal space abscess initially diagnosed as temporal arteritis. Trismus is a classical presentation. Contrast-enhanced CT scanning is indicated. Appropriate referral to an oral and maxillofacial surgeon is crucial for urgent treatment.

Dr. Gordon B. Wong is an Oral and Maxillofacial Surgeon in private practice at Great Northern Oral Surgery in Sault Ste. Marie. He completed his surgical residency at Toronto General Hospital. He is on active dental staff at Sault Area Hospital and is an Associate in Dentistry, Faculty of Dentistry, University of Toronto. He is a member of the Royal College of Dentists of Canada.

Weekly Wisdom: Is Your Brand Biting Off More Than You Can Chew?