It seems as if it was only a few moons ago that I wrote an editorial for this journal entitled, “My Life as a Dictator” (1993). In it I discussed the way I generated my reports to the referring dentists by voice dictation. Once the report was dictated a dedicated typist transcribed the tape. The final printed copy was then sent back to me for proof reading before it hit the Canada Post box to be whisked to the referring dentist for a mere 35 cent stamp (a barrel of oil in 1993 cost around U$18).1 This method of reporting, as I explained, was the most efficient one at the time provided that I was not interrupted during the painful process of dictation. Ordering my staff against this deadly sin (note on my office door said “Don’t Disturb Dictator”) earned me the qualifier of “The Great Dictator”.

Talking to a colleague with whom I hardly ever share patients, I was surprised that he remembered me as the “Great Dictator”. Because people hardly ever remember me for my feeble literary pursuits, I eagerly reviewed my old editorial in hope of finding something valuable worthy of remembering or perhaps a pearl of wisdom that I may have inadvertently created. Then, a more serious thought came to me during a sleepless night: has anything changed in the past decade or so in the method I have described in this “memorable” editorial? For generating meaningful reports remains, and will likely continue to be, one of the most grueling parts of my periodontal practice. It was time to revisit the Great Dictator’s modus operandi.

For one, I felt that quality reporting became more important since my last editorial–they are the primary method of communication between us and good reports serve our patients first and foremost while practicing sound jurist prudence at the same time. A good example is a recent case in which I was peripherally involved, through a complaint lodged by a patient to the Royal College of Surgeons of Ontario (it takes a 50 cent stamp to lodge a complaint in 2005; a barrel of oil hovers around U$70).

The College’s thorough assessment found no fault with either the referring dentist or my handling of the case. Although the complaint against me was a “spillover” of the main allegation directed against the referring dentist, my neck was equally on the line. It was, I believe, the excellent reporting that served as compelling evidence in defence of both of us. Indeed, in addition to a detailed and excellent report, my chart contained no less than two letters written directly to the patient explaining the issues related to the consultation and resulting recommendations. Perhaps dentists don’t fully appreciate that a good report places both the referring dentist and the consulting specialist in a safe position while serving the patient’s interest. A detailed and thoughtful report, unlike a “form letter” is sill preferable. No major change here.

Second, I turned my thoughts towards the method by which I currently create the reports; was there a pearl in my editorial? Have I kept up with the times and with new developments? Could it be that I have not changed in this department either? I was getting concerned that I may have become a dinosaur like the guy who did not update his OS, so graphically portrayed in recent advertising by Microsoft. The truth is that I still dictate my reports. The (magnetic) tapes are transcribed and returned by email for proofreading and often for editing. While editing the reports I look up my intra-oral pictures for the given case, increasing my chances of putting out a higher quality report and one with higher confidence of genuinely portraying the case. Often, I embed a picture in the body of the report (A Picture is Worth a Thousand…).2 Now this is new and worthwhile improvement as intra-oral imaging has become standard practice since my first editorial hit the stands.

In trying to keep up with new developments I tried my hand at “voice recognition systems” on two generations of software packages. It was frustrating and time-consuming. Unless I was prepared to simplify my reports and make them shamelessly generic (generic reports are virtually the same except for the name of the referring dentist, the name of the patient and teeth numbers) so that the machine can easily learn to recognize “repeat-content”, voice recognition proved to be a great disappointment. But wait, there is something new on the horizon: Digital Dictaphones. These machines record a voice dictation as sound files. Then, the files can be sent, via email, to a transcription service anywhere on the globe. Once they are transcribed, for example in Bangalore, the files are sent back via email to your computer to be proofed and printed. The turnaround time can be measured within minutes or hours and the cost of the service varies accordingly. Dictation can be done directly via phone, although for a much higher fee. Although I am not using this method now, mainly due to confidentiality concerns, this direction appears inevitable.

So, after all, there is hope for me… the “Great Dictator” lives on. I don’t have to replace the “Don’t Disturb the Dictator” sign on my door either. Although most Dictators meet their deserved fate, sooner or later, this Dictator is here to stay, at least until the next editorial. 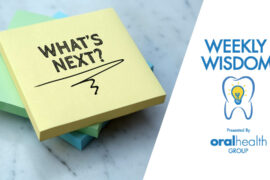