Introduction
With advances in dental materials, instruments, imaging and minimally invasive surgical techniques, one may question the use of the intra-oral block autograft as a practical and relevant method of ridge augmentation. This article will discuss a case report outlining pre-operative and surgical protocols for performing the mandibular ramus block autograft and shed new light on a well-established and proven technique.

Background
There are several sites for intra-oral harvesting of autogenous bone including the mandibular symphysis, mandibular ramus and external oblique ridge, maxillary tuberosity and mandibular tori. 1 The mandibular ramus graft is considered appropriate for sites requiring augmentations of less than 4 mm in thickness spanning a maximum of three to four teeth. It is composed primarily of cortical bone, allowing for minimal volume loss and favourable incorporation into the recipient site. 1-3

In comparison to other intra-oral sites, the ramus graft harvest is associated with fewer complications including decreased patient morbidity and post-operative aesthetic concerns. The greatest risk in performing this type of intra-oral harvest is damage to the inferior alveolar nerve. 2-4 A comprehensive understanding of the anatomy in the mandibular ramus region is essential prior to performing this procedure and will briefly be discussed. The amount of bone that can be obtained from the ramus is limited by surgical access, the coronoid process, the molar teeth and the inferior alveolar canal. Incisions along the ascending ramus can be no higher than the level of the maxillary occlusal plane in order to avoid laceration of the buccal artery and nerve as well as exposure of the buccal fat pad. The mandibular foramen averages 20 mm from the anterior border of the ramus. This is where the inferior alveolar nerve enters the canal and begins to traverse anteriorly and buccally through the mandible. The mean vertical distance from the superior edge of the canal in the second molar and third molar region is 7 mm and 11 mm, respectively. The buccal bone is thickest at the distal of first molar region (4.05 mm). 2-4

In determining the indications for ridge augmentation, a key component of consideration is the amount of bone required at the planned augmentation site. Autogenous block grafts provide a mean gain in width of 4.4 mm with a very low incidence of additional grafting required at the time of implant placement. Conversely, particulate grafts average an increase in ridge width of 2.6 mm and close to 25% of cases will require a second grafting procedure. 5 In the case presented in this article, you can appreciate the extent of horizontal bone loss. It was my hope that the use of a ramus block graft would provide the best opportunity for the patient to obtain adequate ridge width for future implant placement in a single procedure. Some of the key surgical principles that facilitate treatment success and that will be stressed throughout this case report include obtaining an adequate amount of harvest, intimate contact between the graft and recipient bed with adequate fixation and stabilization, tension-free primary closure, strict post-operative instructions and a minimum six-month healing period.

Clinical Presentation and Treatment Plan
The patient was a 50-year-old female who initially presented with the chief complaint “I want implants”. She lost her teeth 1.1 and 2.1 due to non-restorable caries more than 30 years prior to presentation. Previous tooth replacements have included a resin-bonded Maryland bridge and several removable partial dentures. Her primary concerns related to her current interim removable partial denture were the bulk of the prosthesis, the palatal coverage, the aesthetics of the teeth and the fact that it was removable (Fig. 1A). During her presurgical consultation, all treatment options for replacing these teeth were reviewed in detail. The patient wanted a fixed solution and believed implants were her best way to achieve this goal. Her medical history was significant for hypercholesterolemia that was well controlled with Rosuvastatin. She was a non-smoker and reported no known drug allergies. A comprehensive extra-oral, intra-oral and periodontal assessment was performed. Clinical examination of the ridge in the 1.1 and 2.1 area revealed adequate keratinized gingiva, a buccolingual width of 3-4 mm, a mesiodistal width of 18 mm and an interocclusal distance of 6 mm to the opposing lower mandibular incisors (Fig. 1B & C). Significant buccal bone loss was noted on palpation along with minimal palatal flare. Periapical radiographs, intra-oral photographs, and impressions for study models were taken. A dental cone beam computed tomography (CBCT) was ordered with a radiographic guide based on the ideal position of future screw-retained implant-supported crowns.

The CBCT confirmed the clinical findings (Fig. 1D). There was a limited amount of horizontal ridge width measuring 3 mm at both the 1.1 and 2.1 sites. Based on clinical and radiographic examination, a minimum 3-4 mm increase in horizontal ridge width would be required in order to place implants in the desired position and angulation. The patient was advised that multiple bone grafting procedures may be required in order to achieve this goal. She was given three treatment options for ridge augmentation: 1) The use of particulate bone graft. 2) The use of a cortical block allograft. 3) A mandibular ramus block autograft. Following a comprehensive discussion of all options and a second surgical consult, the patient opted for the ramus block autograft. Palpation of the right and left mandibular external oblique ridge was performed along with assessment of a panoramic radiograph. The patient had a bridge extending from teeth 3.5-x-x-3.8. This edentulous area appeared to have minimal bone resorption on clinical and radiographic examination. Thus, this site was chosen for the harvest since the edentulous area would facilitate easier surgical access and an increase in bone width that could be harvested while minimizing the risk of tooth damage. Another CBCT was ordered of the left mandibular body and ramus and used to plan the ramus block graft harvest. 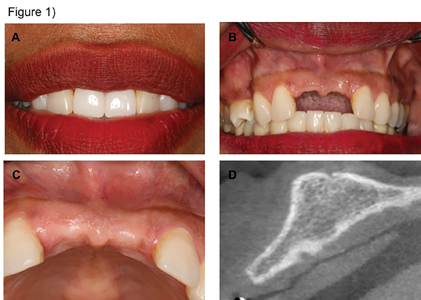 Surgical Treatment and Follow-up
The surgery was performed under single drug intravenous sedation in the Oral Reconstruction Unit at the Faculty of Dentistry, University of Toronto. Informed consent was signed, and the patient was placed on a one-week regimen of 500mg of amoxicillin (TID) which was started the day before surgery. The patient rinsed with 0.12% chlorhexidine for one minute prior to intravenous access and being draped in a semi-sterile clinical protocol. Profound anaesthesia was obtained with the use of topical 5% lidocaine along with buccal and palatal infiltrations with 2% lidocaine, 1:100,000 epinephrine, at the 1.1 and 2.1 sites. A left inferior alveolar nerve block and long buccal nerve block were administered with 2% lidocaine, 1: 100,000 epinephrine, followed by 0.5% bupivacaine, 1:200,000 epinephrine. A mid-crestal incision was performed between teeth 1.2 and 2.2 with oblique vertical releasing incisions at the 2.2 mesiobuccal and 1.2 mesiobuccal. A full thickness flap was raised to the level of the mucogingival junction. The flap was then split and released using a modified superficial-layer split thickness flap technique. 6 Once adequate access was achieved the recipient site was prepared to receive the graft. All tissue tags were removed. Extensive decortication and troughing of the buccal of sites 1.1 and 2.1 was performed in order to facilitate intimate contact with the future block graft (Fig. 2). Following preparation of the recipient site, the ramus block graft was harvested (Fig. 3A, B & C). A full thickness flap was raised from the 3.3 mesiobuccal to the 3.8 distobuccal ascending slightly along the anterior ramus. The block harvest was outlined with a sterile graphite pencil measuring 26 mm x 6.5 mm x 4 mm. These measurements were determined prior to surgery from the CBCT of the recipient and donor sites and then confirmed clinically. All osteotomies were performed with piezoelectric bone surgery instruments and the graft was released with a chisel. The block graft was then immediately placed into sterile saline (0.9% NaCl). All sharp edges from the donor site were smoothed with a round diamond bur and the site was closed with 4.0 chromic gut sutures. The block graft was split into roughly two equal halves to be used for the 1.1 and 2.1 sites, respectively. The two halves were then trimmed and shaped with a round diamond bur to facilitate intimate contact with the prepared recipient site. A locking clamp was used to hold the graft in place as perforations were made for screw placements. Two screws were placed in each graft in a slightly staggered arrangement (Fig. 4A). Following stabilization, the edges of the block grafts were rounded with a round diamond bur. Freeze dried bone allograft was placed over and along the margins of the block grafts and covered with a resorbable collagen membrane (Fig. 4B & C). Passive, tension-free primary closure of the flap was achieved with 4.0 PTFE sutures in two stages: first with horizontal mattress sutures followed by single interrupted sutures. The vertical releasing incisions were closed with 5.0 chromic gut sutures (Fig. 4D). Dexamethasone (6 mg) was given intravenously and hemostasis was confirmed at all sites. A post-operative periapical radiograph was taken. The patient’s interim removable partial denture was adjusted so that no contact with the ridge was present; however, the patient was advised to limit wearing the denture as much as possible during the first 4 weeks of healing. Post-operative analgesia was controlled with 600mg of ibuprofen at the end of the appointment along with prescriptions of ibuprofen (600mg) and Tylenol #3. The patient was instructed to intermittently ice the area over the next 24 hours and placed on a 0.12% chlorhexidine rinse (BID, 14 days). She was informed not to brush the area for two weeks and to finish the amoxicillin she started the day before surgery as prescribed. 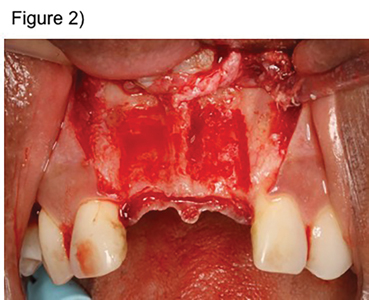 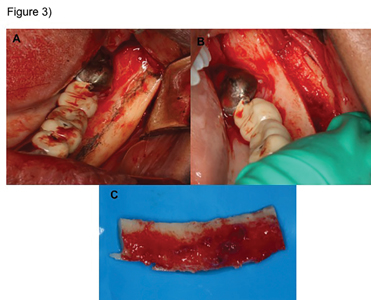 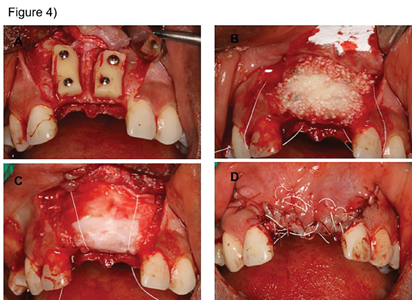 Follow-up appointments were performed at 10 days, three weeks and seven weeks. Sutures were removed at three weeks. All post-operative appointments were uneventful. The patient reported only mild pain that was well controlled with the analgesics, but experienced significant swelling and bruising at both the recipient and donor sites that resolved after two weeks. No altered sensation was reported on the dermatome corresponding to the cranial nerve V3.

At the six-month follow-up appointment, the crestal horizontal ridge width in the 1.1 and 2.1 sites measured 6-7 mm. At this time, the patient could not recall the site from which the bone graft had been harvested from. Another periapical radiograph was taken in addition to alginate impressions for the fabrication of a radiographic guide and a new CBCT (Figs. 5A, B & C). Seven months following her ridge augmentation surgery, two Straumann® (Roxolid®; SLActive®) bone-level tapered implants measuring 3.3 x 12 mm were placed in the 1.1 and 2.1 sites (Figs. 6A & B; Figs. 7A, B & C). Screw-retained positioning was achieved with more than 2 mm of crestal buccal bone. Osteotomy preparation and implant placement was perfomed with extreme caution to prevent delamination of the newly grafted bone from the native bone. No additional bone grafting was required. All post-operative appointments were uneventful. 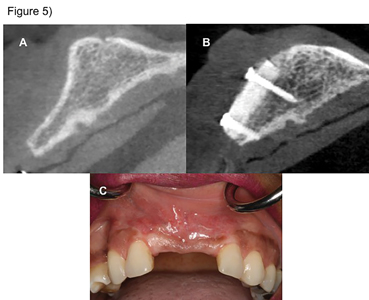 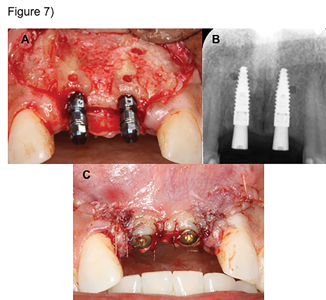 Conclusion
This case report demonstrates the mandibular ramus block autograft as an effective techniqueto to obtain significant increases in horizontal ridge width in a single procedure. Additional surgeries, treatment time and costs were avoided, all of which may have been required if a different ridge augmentation technique was used. Furthermore, the modern use of advanced imaging and piezoelectric instrumentation has enhanced osteotomy precision and the amount of bone that can be obtained while minimizing complications. Thus, the ramus block graft should not be overlooked and still be introduced to patients as one of several potential bone grafting techniques, when prospective implant sites are initally inadequate to receive implants. More importantly, understanding your patient’s expectations and overall treatment goals is essential and the first step in determining the correct therapeutic approach. OH

Disclosure
The author does not have any financial interests in companies manufacturing or distributing products or services mentioned in this article.

Dr. Stephen Spano graduated from the University of Toronto’s Faculty of Dentistry in 2014. He subsequently completed a one-year dental residency at Mount Sinai Hospital followed by his Periodontology residency in 2018 at the University of Toronto. Dr. Spano has several publications in the field of dentistry and periodontology. He is currently practicing as a periodontist in the Burlington and Hamilton.