Introduction
The nasopalatine duct, also known as the incisive canal or anterior palatine canal, is a long slender passage present in the midline of the anterior maxilla that connects the palate to the floor of the nasal cavity. 1,2 The duct is located on the palatal part in midline of maxilla and above retroincisor palatal papilla. 3,4 Throughout the process of the fetal development the ducts progressively narrow until one or two central clefts are formed on the midline of the upper maxilla. 5 Through the nasopalatine foramen, the nasopalatine neurovascular bundle located within the ducts, emerges from its intrabony trajectory. 6 In 1912, Meyer defined the nasopalatine duct cyst (NPDC) for the first time. 7,8 Currently, according to the classification of the World Health Organization (WHO) it is considered as a developmental, epithelial, non-odontogenic cysts of the maxilla along with nasolabial cysts. 6 Its prevalence is estimated to occur in–1% of the population. 9 Most cases occur between 4th and 6th decade of life. It is slightly more common in males than in females. 6 These cysts are usually asymptomatic. On occasion, they may present as soft tissue mass. 6

Case Report
A 31-year-old healthy male patient was referred by an ENT physician to the Oral and Maxillofacial Clinic Unit, Alabrag Hospital, Tripoli, Libya. The patient complained of swelling in the anterior part of maxilla, underneath the upper lip. The swelling obstructed the patient’s nostrils, therefore preventing him from breathing properly. He reported more than one-year history of asymptomatic swelling and was not taking any medications.

A head and neck examination revealed a bony swelling adjacent to the keratinized gingiva mucosa and redness in the non-keratinized gingiva in approximately the region adjacent to the roots of the anterior teeth. (Figure 1) Intra oral examination of the hard palate showed a well-defined massive swelling located posterior to the incisive papilla and measuring approximately 53 mm anteroposterior × 52 mm mediolateral. By palpation, the swelling was fluctuant and non-tender. The panoramic radiograph showed a well circumscribed oval shaped radiolucency with an epicenter located periapical to the upper anterior teeth. The entity extended from the periapical one third of involved teeth roots superiorly to the floor of the nose at the level of the middle conchae, and mesiodistally in between the maxillary upper first premolars. (Figure 2) The abnormality encroached on the maxillary canines and caused root resorptions of central and lateral incisors. The radiographic presentation was suggestive of a Nasopalatine duct cyst; however, a definitive diagnosis via a histopathological assessment was warranted. 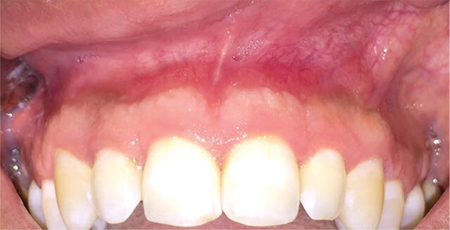 Patient with maxillary swelling and redness of soft tissues in anterior region of the maxillary arch. 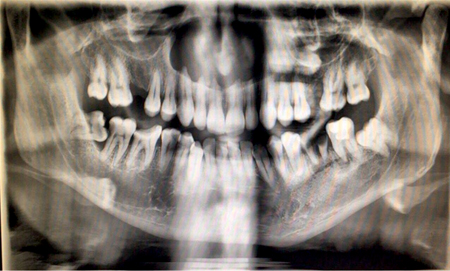 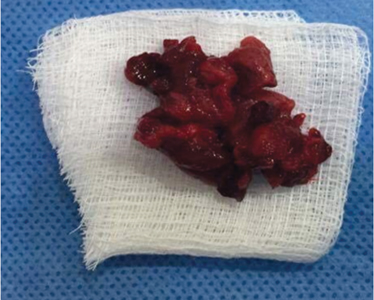 Discussion
This case is of interest as it is a rare presentation for the largest reported NPDC in the literature to date. The patient presented with swelling and subsequent drainage, which are the most common clinical features of NPDC. 10 Radiologically, most NPDCs are round or ovoid in shape. 11 In terms of histopathology, squamous epithelium is most commonly found in histopathological examination. 12

Enucleation is the proper choice of treatment with low recurrence rate. 6 In our case, the cyst was enucleated under general anesthesia. A labial approach was chosen because there was a massive resorption in the labial bone and the nasal floor. A labial mucoperiosteal flap was raised and following bone removal, the friable, hemorrhagic, cyst lining was curetted and sent for histological examination. (Figure 4) Diathermy was used to control nasal bleeding plus nasal packing. The patient was followed up 7-days after the surgery at which sutures were removed, and healing assessment was excellent with no signs of dehiscence, infection, or paresthesia. (Figure 5) Following a consultation with an endodontist, root canal treatment was recommended due to the pathological root resorption from the cyst that compromise crown to root ratio. An annual follow-up was scheduled at which a new panoramic radiograph was taken. (Figure 6) The radiograph showed significant reduction in cyst size and healed bone around the periapical region of anterior teeth. The patient successfully healed with no signs of recurrence. (Figure 6). 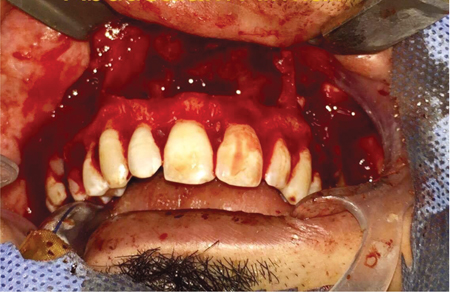 Post-surgical photograph showing the cystic cavity in the labial surface of maxillary arch. 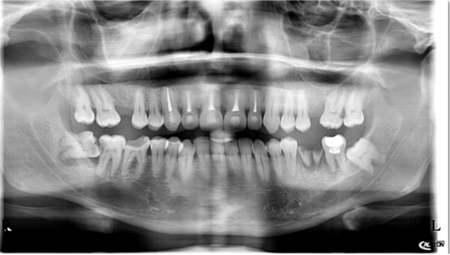 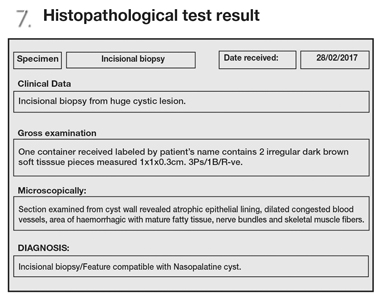 Conclusions
NPDC is a slow-growing benign lesion. It is may be asymptomatic or accompanied with swelling, pain and drainage from the hard palate. Radiographically, a well confined, round, ovoid or heart shaped radiolucency is observed. Histopathological findings show squamous or respiratory cell types, or a combination, infiltrated by inflammatory cells. A referral to an Oral Maxillofacial Surgeon is the ideal treatment planning option for the patient diagnosed with such an entity. OH

Declaration of Interests
No conflicts of interest.

Acknowledgment
We would like to thank Dr. Ebtesam Ebrahim Omar; Oral Pathology-Faculty of Dentistry at Tripoli University Libya for obtaining the histopathology report.

Dr. Abdusalam Alrmali graduated from the University of Tripoli, Faculty of Dentistry Libya (2006). His accomplishments are: a diploma of dental implant from Sevilla University, Spain (2012) and a Master of oral and maxillofacial surgery from the Cairo University (2014). From 2015 until now Dr. Alrmali is currently a lecturer at the Oral and Maxillofacial Surgery Department, Tripoli University Libya. He is an active member of the International Association of Dental Research, Libyan Association of Oral and Maxillofacial surgery.

Dr. Sherif Elsaraj graduated from the University of Manitoba with a DMD in 2010. He holds a B.Sc. in Biochemistry from Carleton University and a Masters of Science in Oral Biology from the University of Manitoba. In 2012, he completed a year of training at the Oral and Maxillofacial Radiology residency program at the University of Toronto, Dr. Elsaraj is currently doing research towards a PhD in Temporomandibular Disorders and Craniofacial Pain at McGill University. He is an active member of the Canadian Dental Association, Ontario Dental Association, and the Ottawa Dental Society. He has limited his practice to treating patients with temporomandibular disorders and sleep apnea management at GumDocs in Ottawa Ontario.


1 Comment » for The Largest Nasopalatine Duct Cyst: A Case Report and Literature Review