The Time to Dilute Effective Infection Control Measures is Not Now

In our cozy corner of the world, we exist without too much concern about infectious disease worldwide. The World Health Report 1996, published by the WHO, revealed that, of all the 52 million deaths worldwide, 17 million were due to infectious diseases. The wide world is becoming smaller. The infectious person travelling more by air, sometimes not aware of an illness, arrives daily on our doorstep as seen in the May, 2001 viewpoint in Oral Health.

The Director-General of WHO, Dr. Hiroshi Nakajima, states in the report that, “We are standing on the brink of a global crisis in infectious diseases. No country is safe from them. No country can any longer afford to ignore the threat.” Eighteen new diseases were reported by the WHO between 1973 and 1995, and more since then.

The World Health Report “Fighting disease, Fostering development” states that infectious diseases are the world’s leading cause of death. Of about 52 million deaths in 1995 more than 17 million were due to infectious diseases. Acute lower respiratory infections like pneumonia killed 4.4 million. Tuberculosis killed almost 3.1 million and about 1.9 billion carry the tuberculosis bacilli and there were 8.9 million cases in 1995.

Many of the most powerful antibiotics are now ineffective. Antibiotic resistant bacteria are responsible for up to 60% of hospital acquired infections in the US. A major reason for antibiotic resistance is inappropriate and uncontrolled use. They are utilized by too many practitioners to treat the wrong kind of infection with the wrong dosage for the wrong period of time.1

Worldwide, 170 billion tons of animal meat is produced annually. Drug resistant bacteria and other microbes are passed on through the food chain, where they may cause disease or transfer the resistance to human pathogens. There are two types of forces involved in the environment of the dental office; (1) those that protect dentists, staff and patient and (2) causal factors that create a less than favourable environment. We can’t do as much to control the causal factors of increasing worldwide and new disease as we can to perform those acts that lessen cross-infection and protect ourselves, our staff and families.

The best precautions are still Standard Procedures (Universal Precautions) which include gloving (because it works), masks (because our operating field is a fluid and aerosol war zone), sanitation of dental unit waterlines (because we shouldn’t spray water into a patients mouth that we wouldn’t drink or swim in), proper sterilization and disinfection of the operating area (a basic operating premise), proper handling of sharps (because we should know how to properly cap a needle) and immunization (because we are in contact with vaccine preventable disease).

Life, in and out of the office, is not risk free, however we should keep any risks of disease transmission to a minimum. 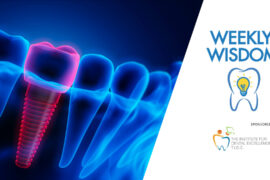